In this article, I am going to introduce how to create a three-dimensional sound waveform from a sound waveform video, without using scripts. We will use 3 softwares, but it’s not so difficult so I hope you find this article helpful!

Note 1: I used AviUtl for editing videos in this tutorial

Note 2: I used the Japanese version of Blender in this tutorial

The Unity project that I introduce in this article can be downloaded from here.
The “rittaionseihaikei” folder in “STYLY_Examples” is the one we are going to use.
STYLY_Unity_Examples

( You can use any video edit software if you can create a sound waveform video) Please confirm that X264 is installed here.

Insert the audio file and the sound waveform

Create a project, select the resolution size ( I used 240×240 so that the file size remains small ). Then, drag and drop the audio file into the scene. Next, right click in the Adv.Edit window and insert the sound waveform from insert media object.

Edit the expansion rate and wavelength height so that the soundwave fits the screen size.

In order to express the soundform in 3D, we need to divide the Cube’s polygons

First, press Shift + A, select Mesh, and create a Cube.

Creating a Cube in Blender

Change to Edit mode from Object mode, press A to select all, and press Ctrl + E to mark seam.

Open the UV Editing window, press u to UV edit.

Then, press I to select a face, select tool→UV tool→pack island and spread the face.

Return to the default screen, select the subdivision surface modifier in modifiers. Apply simple, pull up the view to 6, apply the modifier and divide the polygon. ( In order to see the waveform shape, I divided over 20000 cuts )

Once you confirmed that the polygons are subdivided, export the object as a FBX format.

Create a shader in Unity

Import shader forge ( Which you can download from here → https://github.com/FreyaHolmer/ShaderForge ), and create a shader that changes the vertex position according to the texture color, as in the image below. 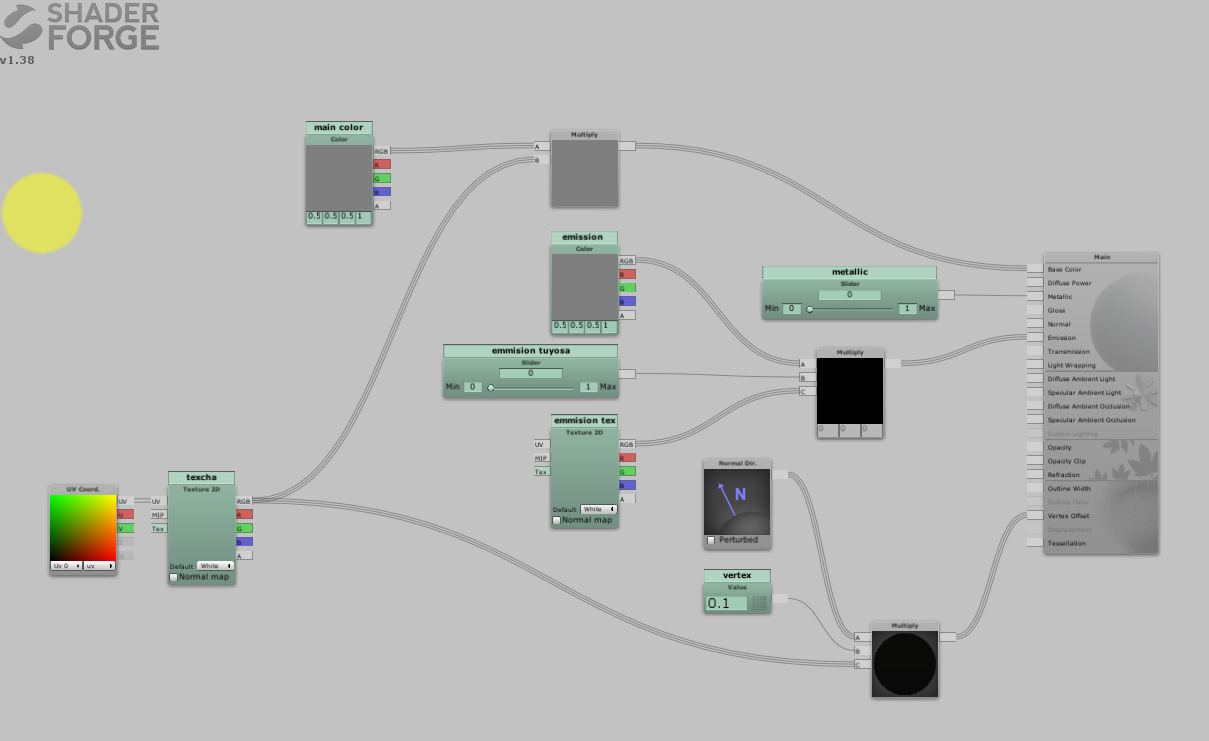 It is included in the sample project, so you can just download it from there.

Now, we are going to create a three-dimensional sound waveform in the Unity scene.

Import the soundwave video and the Cube object from previous steps, and create a material with a Unlit/Texture shader applied.

Next, insert a Quad into the scene to use to display the audio soundwave.

Attach a Video player to the Quad

Make the sound of the video hearable

Apply a material with Unlit/Texture applied to the Quad, so that the soundform video will not be affected by lighting.

Add a camera, and move it so that the Quad is shown on it. Then, change Clear Flags to Solid color, and change the Background color to black. ( This is so that it will not be affected by the sky box colors )

Create a Render Texture for the 3D sound waveform

Create a Render Texture within the project, and attach it to the Camera’s Target Texture. Set the Render Texture size as 720×720 ( Any size is ok if it is not too small ).

Applying the Render Texture to the Camera

Create a material for 3D sound waveform, and apply the shader you created using shader forge to it.

Then, add the Render Texture to the Material inspector.

Applying Render Texutre to the material

It might have been difficult a bit, but by understanding the process, you can utilize your knowledge and create any form of 3D sound waveforms!

thank you! It is a three-day lord! ! ✨ During the day, we are modeling for training or creating VR space! ! Creative fun! ✨Twitter → https: //twitter.com/mikkabouzu777