This time, I will introduce essential and useful shortcuts/tips for modelling.

Some have been shown in the previous articles, but I will also introduce some new tips. So please make good use of them.

Essential shortcuts and techniques with them

It’s been used many times before so I have nothing to say more, but, just in case… In the Edit mode, with vertex, edge or face selected, press the ‘E‘ key to extrude. We use it as a prime function for modelling.

Probably, this shortcut has also been introduced before. With a face selected, press the ‘I‘ key to create an inset of the face. By the way, you could do the same by adding a face with the ‘E’ key and scaling it down. Actually, the latter is the way how have I done for a long time…

‘I’ stands for ‘Inset’. I might have described it as ‘Insert’ by mistake. I just learned it should be ‘Inset’ when writing this article…

There is a useful technique when using ‘Inset’. When you select multiple faces, it normally insets all the faces together. However, by checking ‘Individual’ in the left menu (you can display it with the ‘T’ key), the ‘Inset’ function is applied to each face individually. Once ‘Individual’ is checked, it’s applied to all following operations. So, if anything goes wrong, undo with ‘Ctrl+Z’ and use the ‘Inset’ again.

Create insets for each face individually

In the Edit mode, you can place an edge loop on the object with ‘Ctrl+R‘. ‘Ctrl+R+[number key]‘ can change the number of cuts to create.

You can ‘loop-cut’ at any position

‘Loop Cut’ not only increase faces and edges for editing but also highlight a boundary on a smooth surface.

For example, as seen below, the Subdivision Surface Modifier could smooth out the entire shape of a hat. In this case, ‘Loop-cut’ can highlight the boundary between the brim and the crown.

A tip for ‘Loop Cut’

In addition, you can increase the number of edge loops along the bevel’s face to create smoother shape by using the mouse wheel before confirming the bevel.

And, you can also use ‘Bevel’ to highlight the smoothed corner in the same way as you did with ‘Loop Cut’ earlier. It means both functions can highlight a shape feature by inserting edges.

Bevel can ‘sharpen’ a smoothed corner

In the Object mode, you can duplicate an object by pressing ‘Shift+D‘ with the object selected. By pressing X, Y or Z after ‘Shift+D’, you can move the duplicated object in the selected direction.

In addition, you can duplicate a vertex, edge or face in the Edit mode.

When you want to join separate objects, you can do it by pressing ‘Ctrl+J‘ with those objects selected.

If the origin of the joined object moved to a wrong place, select ‘Origin to Geometry’ on the Tools tab in the left menu (you can display it with the ‘T’ key) to move the origin to a correct position. 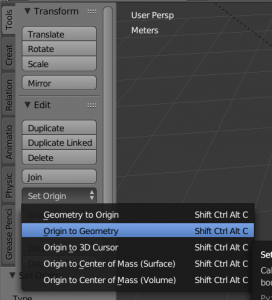 In addition, there is another useful technique. If the region, where you want to create a face, forms a ‘loop’ as shown below, you can fill it in stages by pressing the ‘F’ key repeatedly.

Furthermore, when you want to fill the curved surface, it’s very useful to fill it with faces by selecting the surrounding edges, pressing ‘Ctrl+F’ and selecting ‘Grid Fill’.

By the way, you can also create an edge by selecting two vertices and pressing the ‘F’ key.

You can also create an edge

Use this function when you draw a cut line on a polygon. In the Edit mode, you can enable ‘Knife’ by pressing the ‘K‘ key. Then, draw the cut line with the left clicks and confirm it by pressing the Enter key.

Press the ‘B‘ button and draw a rectangle area by holding down the left mouse button. It is useful to select a large area.

By selecting a vertex/edge/face with the Alt key held down, you can select an edge loop/face loop.

When you want to move a vertex or edge along the mesh surface, you can do it by pressing the G key twice. It’s handy.

Slide an edge along the mesh surface

When joining objects with ‘Ctrl+J’, the joined object often has some faces with their normals flipped, for no apparent reason. I don’t know why it happens exactly. I usually find it when importing meshes into Unity. If you found flipped meshes, select the flipped faces and press ‘Ctrl+N‘ to flip them back to the correct direction.

By the way, you can hide/unhide normals with ‘Normals‘ under the ‘Mesh Display’ section in the menu that you can toggle with the N’ key. 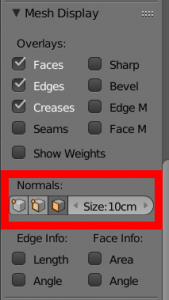 You can invert a selection with ‘Ctrl+I‘.

Translate along the normal

While the S key scales the selection in the standard way, the Alt+S key scales it along its normal.

Scale up along the normal

Select all the meshes linked to the selected mesh

By selecting a mesh and pressing ‘Ctrl+L‘, you can select all the meshes linked to it. It’s very useful to select meshes that are difficult to select, for example, the inside of the object.

Select all the meshes linked to the selected mesh

Select the faces to bridge, press ‘Ctrl+E’ to display the menu and select ‘Bridge Edge Loops’.

It works only for faces in a single object, So, if each face belongs to a different object, join the objects before applying ‘Bridge Edge Loops’.

You can delete (or merge?) the duplicated vertices by selecting all the mesh with ‘Ctrl+A’, pressing ‘Ctrl+V’ and selecting ‘Remove Doubles’ (I used to merge them one by one until I learnt this function…).

You can smooth vertices by displaying the menu with ‘Ctrl+V’ and select ‘Smooth Vertex‘.

They become smoother progressively by applying this function repeatedly.

That’s it for now! Although I have not been on Blender for a long time, there are a lot of shortcuts I should have learnt earlier.

As it’s difficult to memorize all the shortcuts at once, just remember what kinds of functions are available at first. When you actually use them, you can read this article again to remember the details of the shortcuts. Keep doing it and you will learn them naturally!

Blender has a lot of shortcuts, so it’s hard to learn them. But, once you get used to them, you will find them useful. Let’s keep learning together!