Add-ons are a mechanism for further extending Blender’s functionality and making a wide variety of features available. In addition to externally available add-ons, Blender has many built-in add-ons that can be used free of charge and without additional downloads.

This article describes those built-in add-ons.

As mentioned above, Blender’s add-ons are a mechanism that allows you to extend Blender’s functionality and add new features.

Because of their nature, add-ons are managed separately from Blender itself and include functions that are specialized for a particular task.

Many functions of add-ons are not translated and may be unstable, and since it is rarely assumed that add-ons are enabled in books and online articles, the actual screen may differ from the description; as a result, the use of add-ons is recommended for advanced users only.

However, there are many add-ons that are useful in certain usage scenarios, and add-ons can increase the potential of Blender, so let’s take advantage of them!

All add-ons can be activated from a dedicated menu. To open the Preferences screen, go to “Edit” and select “Preferences.” 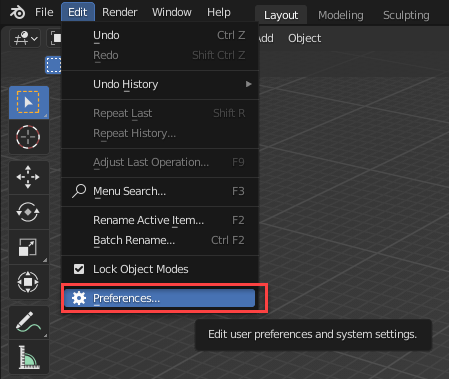 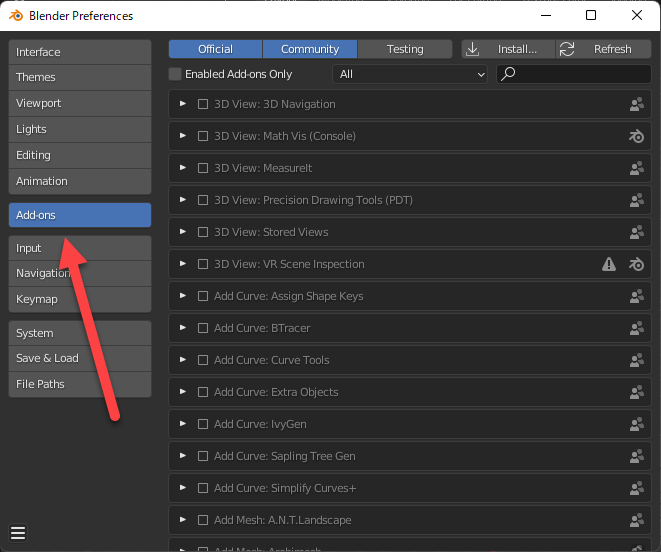 Check the checkbox next to the name of the add-on you wish to use to activate it.

In the case of Blender, the add-on will be loaded and enabled immediately without requiring a restart.

However, in some cases, errors or other problems may occur, so we recommend restarting Blender just in case you have enabled or disabled the add-on.

Press the “▶” button on the add-on to display the add-on information, and you will see the following items:

In some cases, the add-on’s individual settings and other information may be displayed below.

There are three main add-on statuses. You can press button 1 to toggle between “Official,” “Community,” and “Testing.”

You can also specify multiple categories by holding down Shift and pressing the button. 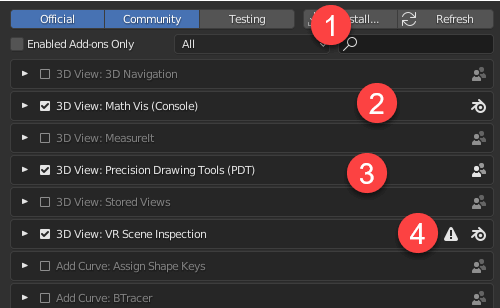 Warning for a VR add-on

In the case of this add-on, it is a development version, indicating that it is a preview release.

This series of add-ons is mainly related to 3D display.

This series of add-ons includes adding curve patterns and shapes that can be generated using curves.

This series of add-ons provides functionality for creating animations.

This add-on provides settings for the camera.

The add-ons in this series provide functionality primarily for Python development with Blender and for Blender on its own.

The add-ons in this series provide functionality for input and output in a variety of formats. Depending on the format, input only, output only, or both will be supported.

The add-ons in this series add functionality to the interface.

This series of add-ons adds functionality to select and configure materials.

This series of add-ons adds the ability to generate meshes and deform them.

This series of add-ons adds functionality to the node’s interface.

This series of add-ons adds functionality to manipulate and modify objects.

This series of add-ons adds functionality to Paint.

This series of add-ons adds support for rendering engines and more.

This add-on adds functionality to the sequencer.

This series of add-ons adds features to Blender as a whole.

This add-on adds functionality to the UV editor.

This add-on adds functionality to the video editor.

You can download or purchase additional add-ons for Blender to add even more diverse functions.

Many authors have released add-ons on Blender Market, Gumroad, and more recently BOOTH, and these add-ons are also available as source codes on GitHub and other sites.

How to upload to STYLY via Unity app.

For questions about STYLY, bug reports, and requests for improvements, please contact at STYLY FORUM.
https://en.forum.styly.cc/support/discussions

By using add-ons, you can customize and use Blender in your own way.
We encourage you to start with the built-in add-ons and explore the configuration of your own.