Lighting is also important in photography and film because it can set the mood of the entire space and give the viewer a sense of unity.
This article examines how such lighting can be used in VR.
In this article, I will focus on the features that are unique to VR, touching on basic principles such as the reflection and refraction of light itself, and consider the points that are characteristic of VR direction.

In this article, I’m thinking about the following points while characteristic points that are unique to VR.

These properties combine to make objects appear transparent when only certain colors are reflected, or when refraction is repeated while passing through objects.
Interference is a little difficult to understand, but it is a phenomenon in which two or more light waves collide with each other. For example, the reason why we see seven colors of light in soap bubbles, etc., is because multiple lights collide with each other, leaving random colors that are visible to the eye.

Based on these properties of light, let’s take a look at two points to increase the presence and persuasiveness of materials.

Lighting when you want to emphasize transparent objects

For transparent materials, the above properties of light occur simultaneously.
Of these, “absorption” is the easiest to use when describing transparent objects.
Water, glass, and ice have a characteristic of not absorbing much light, only blue light.

In this case, the only object is a cube, but by using multiple Directional Lights to shine blue, light blue, and yellow lights, the image of a single light coming through and dropping into multiple shadows is simulated. 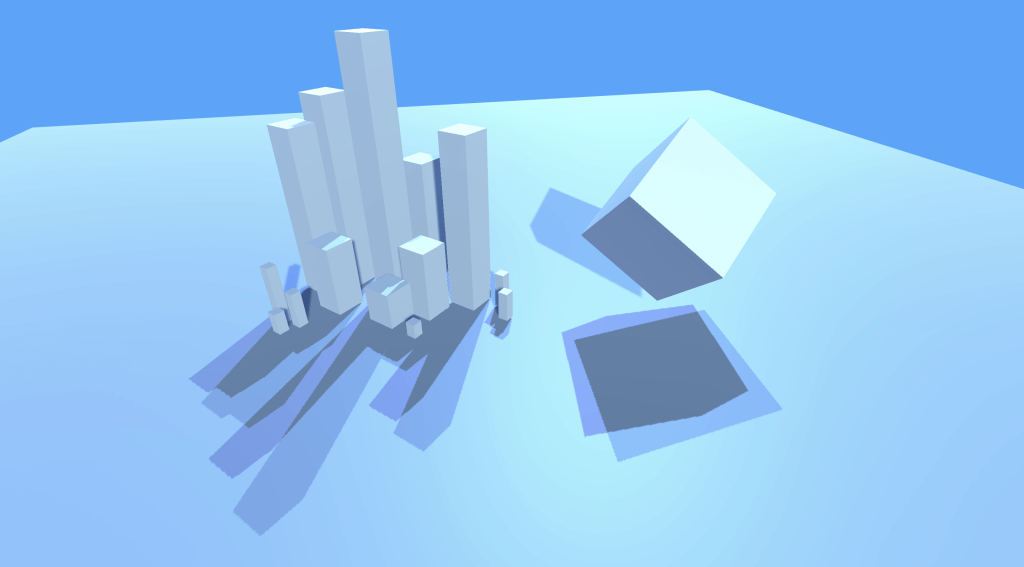 Light images that create a sense of transparency in objects

In 3DCG space, skin is also reproduced based on the multiple properties of light.
Skin is actually a translucent object.

In a translucent material, transmission and scattering occur in a characteristic way.
The technique to reproduce this property is called “subsurface scattering” in CG terminology.
As shown in the following image, light that is “transmitted” and “scattered” within the skin eventually reaches the eye, so the reddish tint of the flesh appears stronger in the more transparent areas. 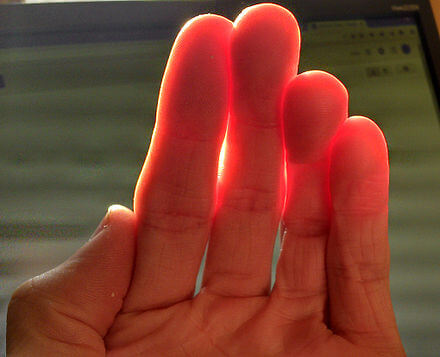 With this in mind, you can create lighting that emphasizes the texture of the skin, as shown below.
In 3DCG simulations, it is better to create pseudo lighting that assumes natural light, rather than just tinting, so that the screen does not emphasize the CG look.

The following image shows the use of Directional Light as lighting.
The skin color is blackish, and it looks hard and shabby. 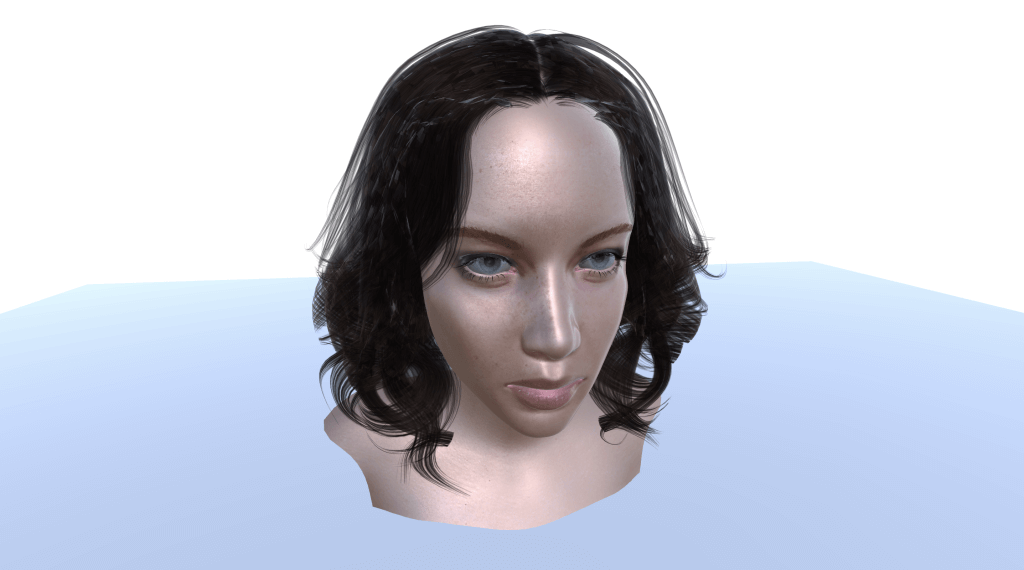 Face model with only Directional Light

In the image below, multiple lights are used to apply red, yellow, blue, and green colors to the face, while orange tones are applied to the lips, under the chin, and collarbone line. 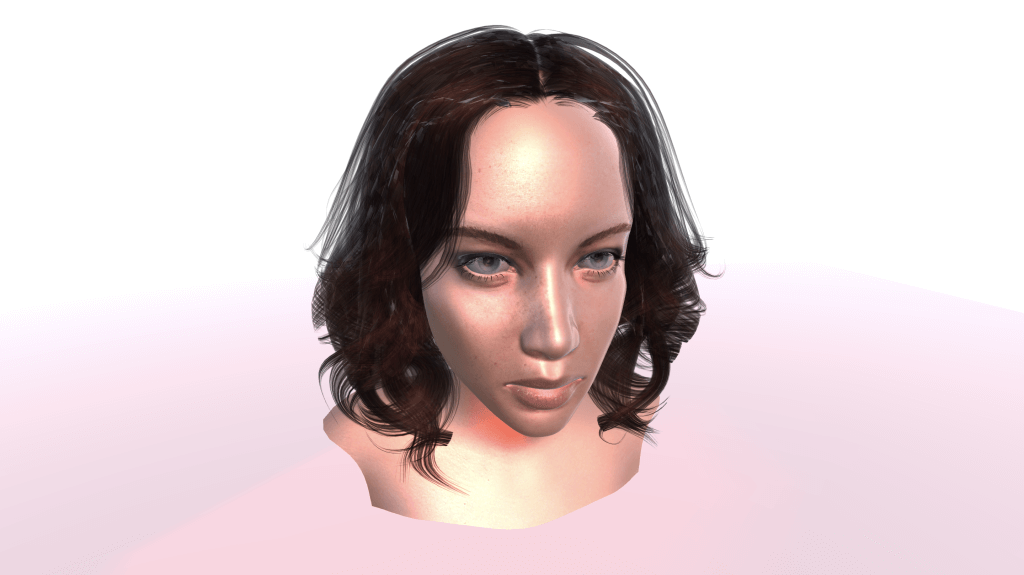 Lighting to create a space

Other than light, lighting can also be used to indicate the state of the environment and space.
The current VR space using HMDs is based on creating experiences through visual and auditory simulations, and the senses of smell and touch are still under development.
However, by using light to create smoke, fog, wind, etc., visual metaphors can be used to describe the environment, such as climate and temperature, outside of sight.

Lighting to describe a place

Lighting can also be used to show the characteristics of a place to explain the space to the user and guide the expected movement.
Even in real life, lighting can be designed to emphasize doorways and other areas, or to differentiate between hallway and interior lighting.

As shown below, lighting that emphasizes the building with the blue sign you want the user to go to next can guide the user’s actions.
Sometimes it is simpler to turn off the Directional Light and illuminate the place where the user is going than to provide a UI to guide the user in the scene.

Indicating where to go with lighting

In reality, sunlight and other lights that illuminate an entire space rarely shine from right beside or below, but in a VR space, creating such virtual lights can show that the space is conceptual.
In addition, in a zero-gravity space, it can make it easier to understand the feeling of floating.
The following is a simple example where the Directional Light is directed from below, while the Point Light is placed below the astronaut.

Lighting that illustrates the environment

The image below shows a blue fog in the distance, assuming that the viewer has arrived at the blue sign, which was the destination of the previous guidance.
This creates the image of wind blowing in the distance.
If you want to use such a simple fog in Unity, you can select it by checking the “Window>Rendering>Lighting Setting>OtherSetting” checkbox.

The back of the room is covered with a bluish Fog.

Lighting to illustrate the passage of time

Another use of lighting is to illustrate metaphors created by light, such as the passage of time.
For example, when the lighting changes from the setting sun to the night sky, it can indicate that time has passed and a new event has been created in that scene.

Since the VR space is essentially a CG simulation space, cause-and-effect relationships and the programs that create them exist, but time does not strictly exist (the simulation is just running chronologically at the moment you start the program), because time is not passing in a place that is not related to you like nature.

Therefore, the sun does not move no matter how many hours you play, which is basically unnatural in the opposite direction.
However, you can change the sense of the passage of time depending on the lighting.

In this article, I’ve introduced some perspectives on lighting in VR space.
I hope you find this information useful when creating your scenes.