In this article, I will introduce how to create an audio visualizer using Playmaker.
By using this technique, you can create an interactive scene with music.

What Kind of Scene Can You Create?

By using the Playmaker custom action I will introduce in this article, you can create an audio visualizer-like object which will actively react to sounds. For example, you could create an object that changes shape according to certain wavelengths, or set it so that an effect will activate if the sound exceeds a set threshold. You can use your own ideas to create a more original effect also.

In order to create the audio visualizer introduced in this article, you need to install the following software.

To learn how to install Playmaker, please refer to this article.

To learn how to install Unity Plugin for STYLY, please refer to this article.

The audio visualizer looks perfect through a VRHMD, but will not work with a web player.
The reason for this is the distributed custom action does not support WebGL.

How to Use a Custom Action

When you open the Playmaker action browser with ‘Playmaker’ with ‘Unity Plugin for STYLY’ installed, you can find custom actions named ‘Init Audio Spectrum’ and ‘Get Audio Spectrum Level’ in the STYLY items.

By using these custom actions, you can analyze the audio spectrum of the music in the scene and access those values.

Init Audio Spectrum:
This will set the parameters to analyze the audio spectrum.

Get Audio Spectrum Level:
This will get the value of the audio spectrum at a specific wavelength

How to Use a Custom Action

I will introduce how to analyze the audio spectrum of the music in the scene, and how to access those values.

You will need an object in the scene in order to execute ‘Init Audio Spectrum’.
If you use ‘Get Audio Spectrum Level’ and specify the Index, then you can store certain wavelength values as Variables. By using these Variables and combining them with other Playmaker actions, you can create many uses.

For example, if you want to create an audio visualizer, you can use the ‘Set Scale’ action and use the variables from ‘Get Audio Spectrum Level’ to set the scale of the object. How to Create an Audio Visualizer

I will explain how to create an audio visualizer using the custom action.

Add an Object with ‘Init Audio Spectrum’ in the Scene

First, add an object with ‘Init Audio Spectrum’ to the scene. Open the Playmaker action browser, find the STYLY item, and double click on the ‘Init Audio Spectrum’ custom action. Now, the action has been added to the State. 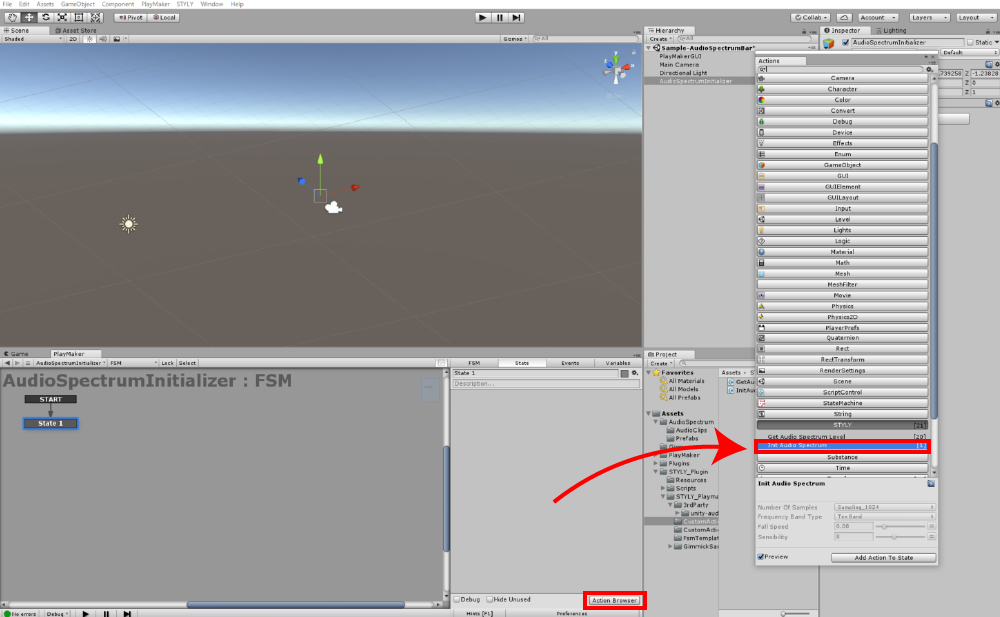 Next, create an object that will change size according to sound.

First, create an object. In this tutorial, I will use a Cube that will change size according to sound to create a simple audio visualizer.
Right click on the hierarchy window, and select ‘3D Object → Cube’ and place a Cube in the scene. I named it ‘AudioVisualizeCube’.
While selecting the ‘AudioVisualizeCube’, right click on the Playmaker Editor, and select ‘Add FSM’. 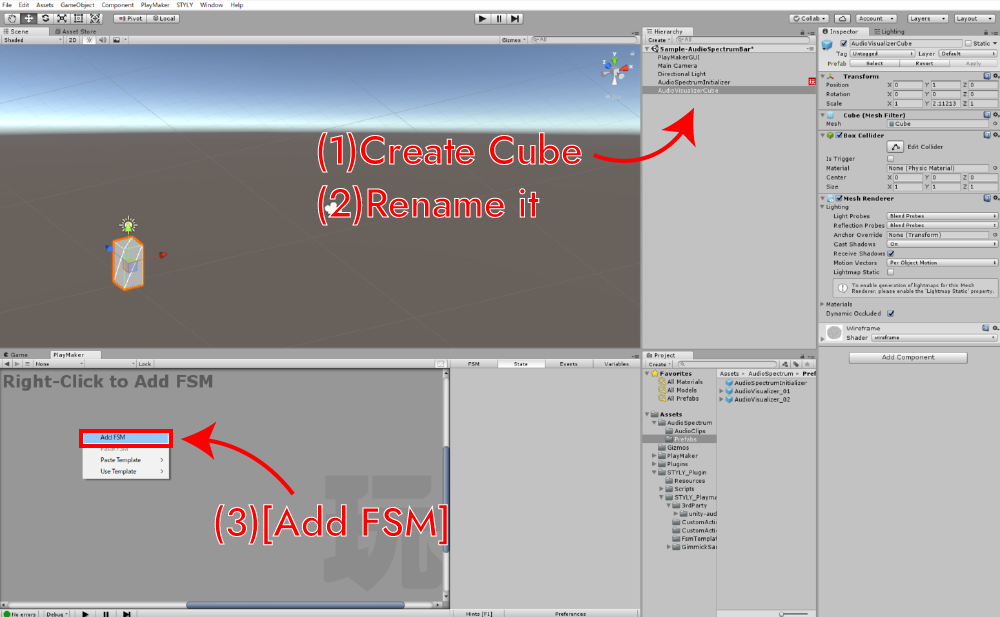 Open the Playmaker action browser, find the STYLY item, and add the ‘Get Audio Spectrum Level’ custom action to the State. Also, add the ‘Set Scale’ action from ‘Transform’ also. 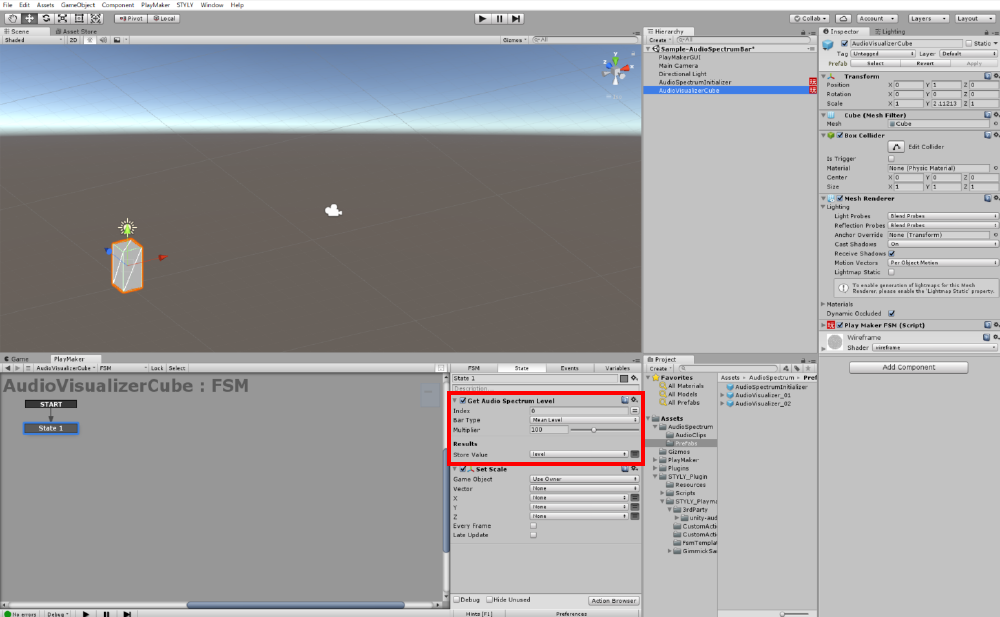 Lastly, we need to edit the settings for the custom action.

Index
The ‘Frequency Band Type’ for ‘Init Audio Spectrum’ is ‘Ten Band’, so we need to set it between 0 – 9. I used 0 for this example.

Multiplier
This value will be multiplied to the result. The default value is 100.

Store Values
This specifies the Variables to store the values in.
Click on the 2 line button on the right, and change it so it can specify a variable. From the pull tab, select ‘New Variables…’, add a new variable named ‘level’, and store it there.

Set Scale
We will create an audio visualizer that only moves in the Y-axis direction.
Use the ‘level’ variable we just created for ‘Y’.
Also, check the ‘Every Frame’ box so that it will react to the sound for every frame. 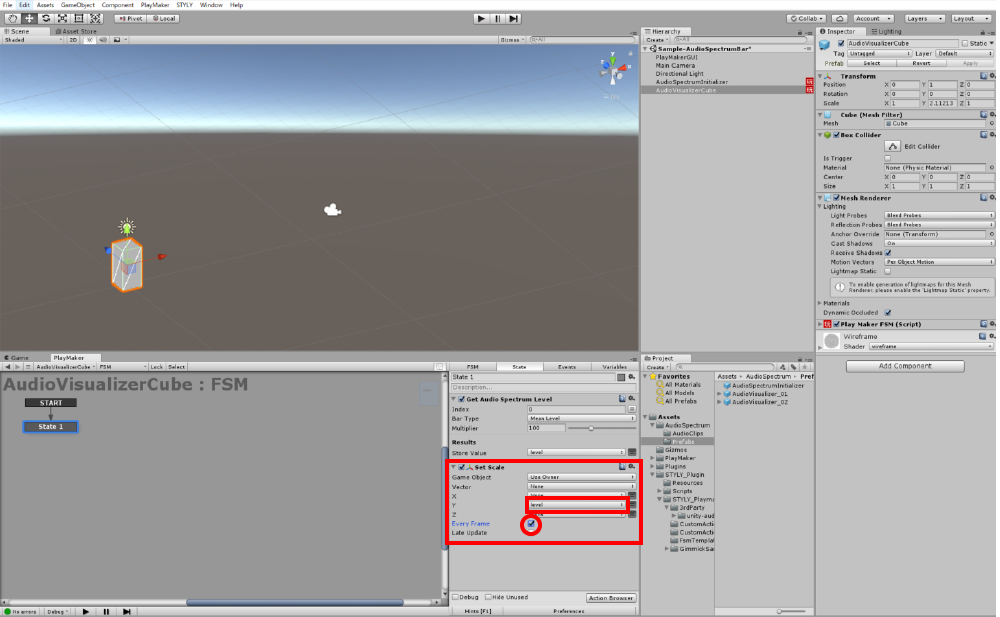 The audio visualizer will not move unless there is a sound source, so we need to place one in the scene.

Right click in the hierarchy window, choose ‘Audio → Audio Source’ and place it in the scene.
Open the Audio Source Inspector window, and attach a sound file to the Audio Clip. 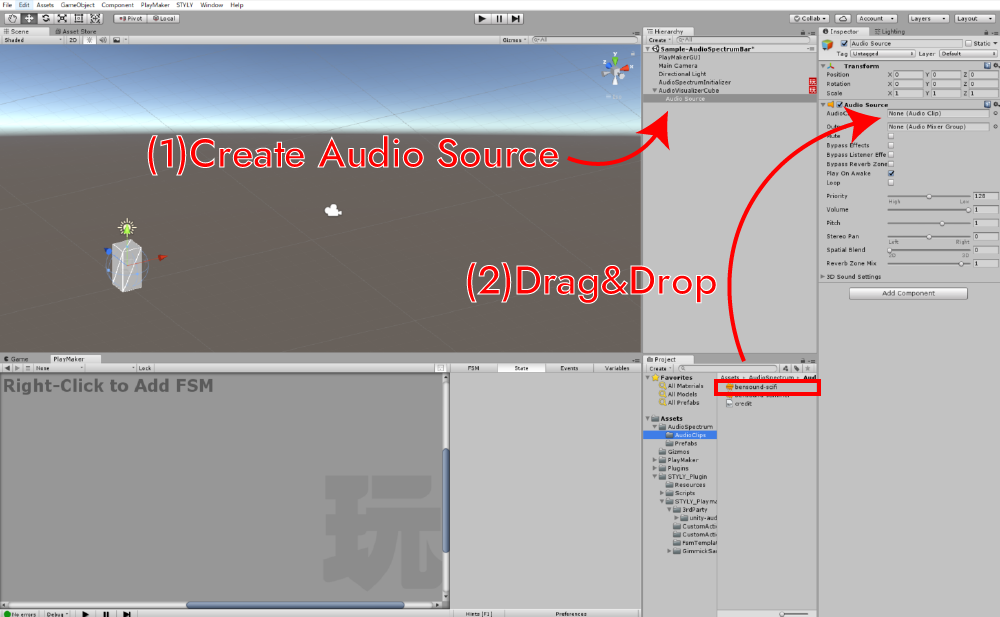 Now we have completed the audio visualizer.
Click the Unity Play button and see if the visualizer works properly.
If you want to create a scene where multiple cubes move according to certain frequencies, then simply create more and set the ‘Get Audio Spectrum Level’s Index’ to 0 – 9 and place them accordingly.

To learn how to upload assets from Unity to STYLY, please refer to the following article.

In the next article, I will introduce how to use the audio visualizer to create a simple VR music promotion video.