In this article, we will introduce the basics of Global Illumination (GI) in Unity and how to use it to reflect indirect lighting-like expressions in a STYLY space.

Unfortunately, the effects of the techniques described in this article will not be reflected correctly in web browsers (STYLY Studio and STYLY Gallery).
The effects will be reflected only in VR, so please take that into consideration when using the techniques.
Also, this time you need to upload the entire scene to STYLY.
The version of Unity used is 2019.3.6f1.
Click here to check which Unity versions are compatible with STYLY.
https://document.styly.cc/doc/docs/en-US/creator/creator_plugin_intro/#about-the-corresponding-unity-version

You can experience the sample scene created in this article from the following.

What is Global Illumination (GI)?

Global illumination (GI) is a technique for expressing light in CG in a way that is as natural as when humans see reality with their eyes.
In Japanese, it means “Global Illumination”, which means not only expressing localized direct light, but also expressing global lighting effects including indirect light such as reflected light and ambient light.
For more information on the basics of lights and how to use them in Unity, please refer to the following article.

To make the GI effect easier to understand, we will create a closed room with red and green walls based on the Cornell Box.
The Cornell Box is a famous model invented by Cornell University researchers to verify that CG lighting effects are rendered as realistically as possible.

Before we start creating the space, we will set the MainCamera to the same Your Position in STYLY, as we will be uploading the scene to STYLY.
I set the depth (Z coordinate) to -5 and the height (Y coordinate) to 1.5, as appropriate.

Now let’s create the room.
This time, we will create the floor, walls, and roof all using the Unity basic object Plane.
The reason for this is that Planes do not have a mesh on the back side, so it is easy to make a closed space and see it from a perspective outside the walls in the Scene view.
Place the Plane on six sides to create a room.
The Scale values for the walls and ceiling are all set to 1, and the height (Z coordinate in this case) of the walls is halved to 0.5.

Creating a Room with Planes

In my case, the Transform for each Plane is as shown in the table below.

Adding color to the walls

The first step in creating and applying a material to the walls is to “Generate Lighting” from the Lighting window to make it easier to see the differences in color.
The Lighting window can be opened by selecting Window > Rendering > Lighting Settings from the File menu.

Press the “Generate Lighting” button at the bottom of the Lighting window.
If the button is grayed out and you can’t press it, uncheck the “Auto Generate” box next to it so that you can press it.

We will use the Lighting window often, so let’s lay it out to the right of the Inspector.
Now, let’s create the materials.
In the Project view, select Material from the Create menu and name it “Red”.
We will use the Standard Shader and set the Albedo color to (R:240, G:0, B:0).

Create a material called “Green” and set the Albedo color to (R:0, G:240, B:0).
Apply these to each of the left and right walls. (Drag and drop the material from the Project view onto the GameObject you want to apply it to in the Hierarchy view.
For the other walls, floors and ceilings, we want them to be white, but not completely white (R:240, G:240, B:240), so we created a material called “White”.

After applying the material to all the planes, the result is as follows.

The RGB value of “240” is a reference to the material chart provided by Unity.
This means that it is necessary to make the GI effect look more natural.

After removing the Directional Light

When we remove the Directional Light, the room is not completely dark.
This is actually because the GI effect is already enabled and the room is already illuminated.
So where are the settings for this lighting?

Setting up preferences for Lighting

Then the room is completely dark.

The room is now completely dark

We will use an Emissive object as the light source.
First, we will place the Cube and create and apply a material named “Emissive”.
To make it an Emissive object, simply enable Emission on the material and set the Emission > Color > Intensity value to 0 or higher. I set it to 1 for now. 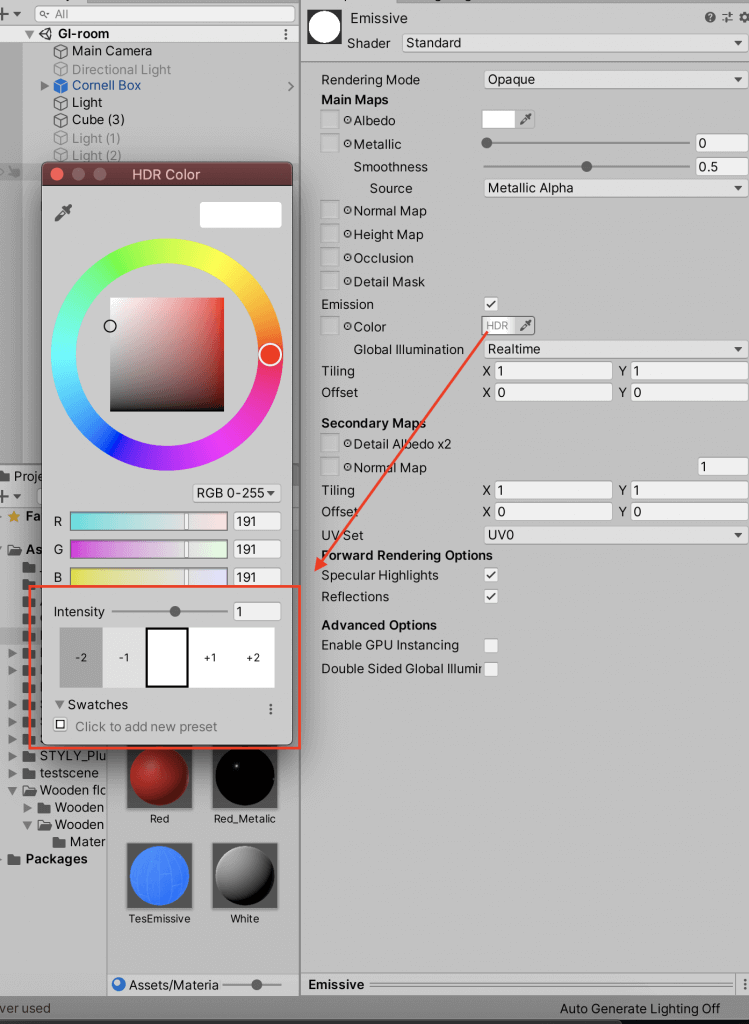 The object with the material with Emission turned on.

Turn on Contribute Global Illumination for the Plane

Now that it looks like it is emitting light, we thin it down and place it on the ceiling.
As you move the cube and turn Contribute Global Illumination on and off, a progress meter will appear in the lower right corner of the screen, indicating that the lighting effect is being applied after some processing is done.

The lighting process in progress

Now let’s go back to the Lighting window.
At the bottom, the item “Auto Generate” is checked.
If you turn it off, the button “Generate Lighting” is now enabled.

If you move the Emissive Cube or turn on/off the Contibute Global Illumination, the lighting in the scene will not change.
Instead, when you press the “Generate Lighting” button, the process is executed and the lighting is changed according to what you have edited.
Also, after this process was executed, a folder with the name of the scene being set and two files were created in the Project view.

Lighting data has been created

This process is called lighting pre-calculation, and the pre-calculated data associated with the scene will be created in a folder with the same name as the scene.
This data will be used for drawing when Unity or STYLY is run.
Also, uncheck Mixed Lighting >Baked Global Illumination in the Lighting window.

Place the primitives in the room

As it is, the fluorescent lamp-like object is bare and cannot be used for indirect lighting, so we will create a lampshade-like object with a Cube and place it under the Emissive object.
We will also change the Intensity of the Emissive material to 2.5 to brighten up the scene.
Then, place the Cube and other primitives on the floor as desired.
For the primitives I added, I of course turned on the Contribute Global Illumination and applied the White material.
Also, set the Smoothness of the White material to 0. I also set the Smoothness of the White material to 0, in order to diffuse the light from the surface of the object better.
The result of the Generate Lighting is shown in the image below.
The surface of the primitive facing left is red, and the one on the right is green.

Scene with the primitives in place

This is because the light from the Emissive object is reflecting off the walls and reaching the surface of the primitives.
This is one of the effects of GI.
Of course, the same is true for textured materials.

I also placed Emissive objects on the red and green walls, and made the textured Sphere Emissive as well.
I wanted to make it a little darker, so I lowered all the Emission brightness values to 1.5.
I also set the two ambient light brightness values mentioned above to zero.

Add a model that emits light

Then click Generate Lighting.
The light on the wall side of the Emissive object is now brighter.

Since the whole scene is now too bright, we can adjust the brightness of the indirect light using Light Mapping Settings > Indirect Intensity.
In this case, we set it to 0.7.

The brightness is good, but I was concerned that the resolution of the light hitting the wall was too coarse.
On the other hand, if you increase the Indirect Resolution too much, the Generate Lighting process will take a long time, making it less efficient.
It may also affect the performance at runtime, so I’ll change to Point Light for the wall.

Due to the specifications of STYLY, the “Render Mode” of Point Light must be set to “Important” for the light to function, so set it as such.
Also, to draw shadows from the Point Light, change the “Shadow Type” of the Point Light to “Hard Shadows”.

Change the light source near the wall to Point Light

Since Point Light is spherical, the shape of the light has changed, but the roughness has disappeared.
The shadows are also rendered properly.
Also, even if you change the Indirect Resolution back to 2, the roughness is no longer an issue.

If you refer to the official Unity tutorial, it seems that Indirect Resolution of 4 is a very high value.
Even for indoor spaces where indirect light representation is more complex, 2-3 is about right.

Precomputed Realtime GI (Global Illumination)
*The name “Realtime Resolution” in this tutorial seems to have been changed to “Indirect Resolution”.

The pre-calculated lighting data created by Generate Lighting will also be included in the upload.
After uploading, you should remove the Directional Light that is attached to the STYLY scene by default because it makes the scene too bright.

Information used as a reference

The following articles were mainly used as references for this project.