In this article, I will explain how to install the ‘Amplify Shader Editor’ asset, a node-based shader editor, and give a simple example of its application.

If you have a shader effect to try but cannot find how to start making it, this asset would help you.

What is ‘Amplify Shader Editor’?

Amplify Shader Editor is one of Unity’s editor extensions for shader editing.

Of course, you can use a shader language such as HLSL, to edit a shader in Unity. However, you could also use a node-based editor to create a shader in a visually intuitive way. ‘Amplify Shader Editor’ is a prime option for such editors.

Learn Shaders with the Node-Based Approach

In Amplify Shader Editor, you can write shaders by connecting nodes, which is more visually intuitive.

An advantage of node-based shader editor is that you can easily understand the basic structure of the shader because you can build it up without the hassle of coding. In particular, a great advantage of Amplify Shader Editor is that any modifications you made are immediately reflected on the scene, so you can repeat your experiments quickly. 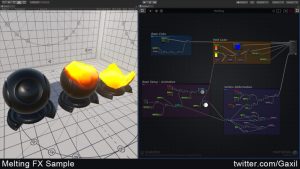 An example created by ASE

Differences from Other Shaders

In addition to ‘Amplify Shader Editor’, there are other node-based shader editors such as Shader Graph, Shader Forge. In particular, Shader Forge introduced from Unity2018 is free and it is so versatile that you can create a variety of shader effects.

Create Shader for STYLY with ShaderGraph in Unity

On the other hand, Amplify Shader Editor is expensive but, referring to many sample demos and ones shared in the community, it helps you to create elaborate expressions. In addition, it has many nodes and its user interface and functions offer good usability. So it’s getting popular. You can also use conventional Rendering Pipeline (Forward Rendering, Deferred Rendering and etc.) in Amplify Shader Editor.

And, as Shader Forge is only supported by Unity2018 or later, I recommend using Amplify Shader Editor when you need to use the version earlier than Unity2017 for VRChat etc.

Click here to check which Unity versions are compatible with STYLY.
https://document.styly.cc/doc/docs/en-US/creator/creator_plugin_intro/#about-the-corresponding-unity-version

How to Install Amplify Shader Editor

I briefly explain how to install ‘Amplify Shader Editor’.

You can buy it on Unity Asset Store (They sometimes sell it for half price in the sale).

After downloading, import it to Unity.

Create a New Shader and Material

I also created a new Material by right-clicking the created shader and selecting ‘Create > Material’. By applying the Material, you can immediately see the change of the shader you edited.

Add and Connect a Node

Now, we actually add a node and edit the shader. You can add a node by clicking ‘□’ in the top right corner of the screen or using the list you can open by right-clicking the screen. Drag the required node (In the example below, the Color node) onto the Edit screen to add.

You can also add it by using the shortcut. In the list, the node with ‘[number]’ on the right of its name (In the example below, ‘Color[5]’) can be added by clicking on the Edit screen with the shortcut key held down. I explain the detail later in ‘Basic nodes’.

You can connect nodes by connecting ‘Input’ and ‘Output’. This time I connected ‘Output (RGB)’ of the Color node to ‘Input (Albedo)’ of the master node. If you want to disconnect them, you can do it from the ‘Output’ side.

The master node is a node to accept the output of the shader you edited. Put ‘Green’ into the base color ‘Albedo’, save and apply the change to the material by pressing the yellow button in the top left corner. Then the color of the cube will change. In this way, you can easily check how the change affected the result.

The Node Property of the Output Node

When you create a new shader and open the Edit screen, you will find one node placed by default. This is the output node to which all the nodes will be eventually connected.

‘Texture Sample Node’ (Shortcut: ‘T’) is a node to import Texture to the shader. You can place a new ‘Texture Sample Node’ simply by dragging Texture onto the Edit screen. The UV port of the input can be connected with the output of ‘Texture Coordinate【U】‘ to make the UV shared by multiple Textures, for example.

The following nodes are used to input values. 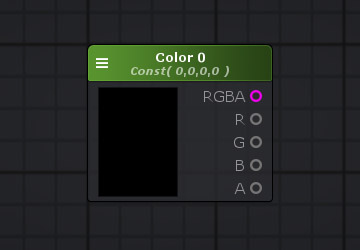 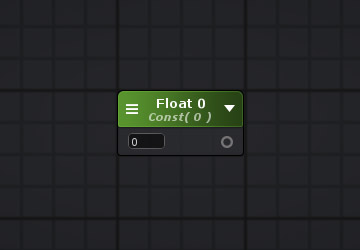 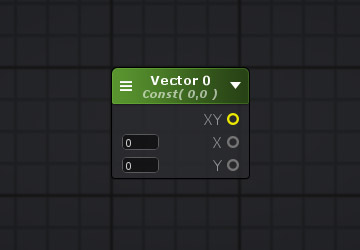 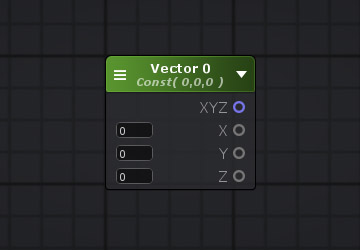 The Abs node returns the absolute value of ‘Input(Float)’.

The Lerp node linearly interpolates between A and B based on the Alpha value. Alternatively, it can be written as ‘( ( 1 – I) * A + I * B )’. It basically allows you to blend A and B by using the Alpha value. As seen in the following screenshot, you can also use it to blend two Textures into a natural ‘ground’ surface.

You can easily try creating various expressions by making good use of various nodes.

The Color Is Sensitive to the Viewing Angle

This shader calculates the difference between the world coordinates of each pixel and the ones of the camera and outputs its unit vector as the color information to change the color every time you change the position of the camera.

The procedure on the Edit screen is as follows. First, right-click the Edit screen to open the list and create ‘World Space Camera Pos Node’ and ‘World Position Node’ from it. Next, left-click the screen with the ‘S’ key held down to add ‘Subtract Node’. Connect its input with the coordinates (Vector3) of the ‘World Space Camera Pos Node’ and ‘World Position Node’ you created earlier. Finally, add the Normalize node by left-clicking with the ‘N’ key held down, connect it with the output of the Subtract Node and then connect the returned unit vector to the Emission of the Output node. Now the shader is completed.

Keep the Water Surface Level with the Ground

Next, change the Blend mode of the Output node into ‘Transparent’ to render transparency. By using the Step node introduced earlier, make the part above the object’s pivot (the center, or the center of gravity) transparent. In this way, you can easily create the water surface constantly level with the ground regardless of the angle of the object.

I imported the design examples and the sample shaders to STYLY.

In this article, I have introduced ‘Amplify Shader Editor’, from its installation to a simple application of it.

I hope it will help you to edit shaders by yourself.

A large student who jumped into VR in the trigger to meet the TV anime "Prepara". Daily struggle to realize the world of "Prepara" to VR. We usually create VRCHAT's World Creation and Avatar Creation by Vroid, etc., and also write a sensual novel with VR theme. In the VR architectural contest, we won the master canna award in "Beautiful Building" by Shader.