In this article, I will introduce how VR artworks have been exhibited using case studies.

There are many artists who are interested in VR and AR artworks.
However, there are some people who have a fixed image of VR as “that thing we wear on our heads” and cannot imagine presenting their work in an exhibition or critique.
Pipilotti Rist, who held a large solo exhibition that drew much attention in Japan, said, “The best way to appreciate art is to perceive it not only intellectually, but also by feeling the reactions of the body.

The concept of virtual reality is also supposed to be about invading the whole body’s senses into a place and time that is not here, to create an image of time and space that is different from reality.
As evidence of this, Ivan Sutherland, one of the computer scientists who dreamed up the early Internet and invented the forerunner of the GUI that has become commonplace in today’s personal computers, set forth the vision that “the ultimate display will be a room in which the existence and physical properties of objects themselves can be controlled” and invented the first head-mounted display (hereinafter referred to as HMD), opening up the history of VR.

However, as of 2021, the more thoughtful and honest we are in creating VR works, the more we tend to focus on how to handle HMDs, which currently have limitations in terms of weight and drawing ability, and what kind of images we can create with highly difficult software.

For viewers who access the VR space from the real world, their relationship with the work begins from the time they leave their homes, walk to the exhibition, and encounter the work in the exhibition space.
How can we use the current VR, with its restrictions on the way of viewing, for the viewing experience?
I will introduce some examples of VR works in Japan and overseas regarding the creation of exhibition spaces, and compare how to create gradation between reality and virtual in artworks.

Of course, depending on what you think of art and how you plan to exhibit it, the exhibition itself and even the way you view it will change.
Please include the fact that art does not necessarily take place only in a museum.
In this article, I will cover a combination of sculptural objects, video installations, theater, and local projects that were exhibited in addition to HMDs in each of the case studies.

I won’t cover a lot of the narrative within the works displayed on the HMDs themselves, as I will focus on the method of exhibition to avoid spoiling the works.
Please keep in mind that this may not be a sufficient explanation of the work.

Jon Rafman is a Canadian artist and prolific writer who also makes films and publishes essays.
Prior to his VR works, he has attempted to describe how current technology is affecting our lives through his science fiction worldview works, and his video art works have used enclosures such as ball pools and meat chairs that engage the viewer’s body in an intense way (Jon Rafman HP). 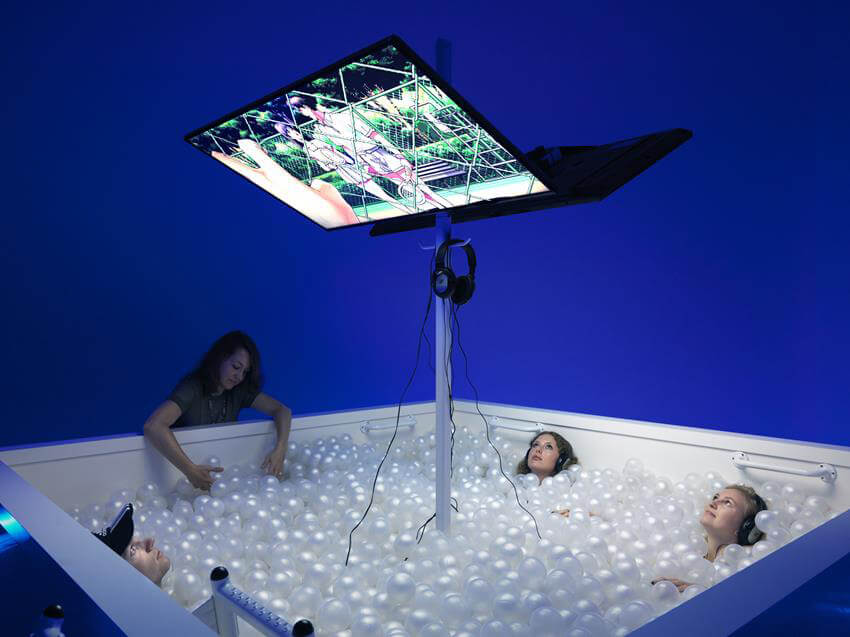 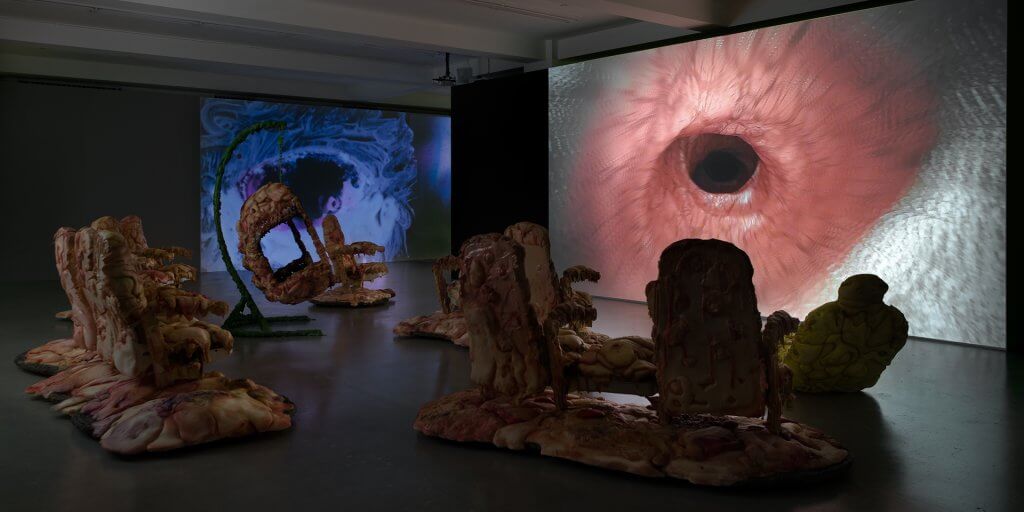 Here are some exhibition views and sketches of his VR work, “Trans-dimensional Serpent”.

The following text is about the work.

Trans-dimensional Serpent is a complex and fascinating four-minute Oculus Rift experience that places the viewer in a supernatural environment inhabited by a multitude of fantastic beings, including strange alleys, warm deserts, and cold forests. The work extends any consideration of the impact of technology on modern life to a more tangible physical experience, addressing the fulfillment of physical pleasure while simultaneously speculating on other ways of seeing and modes of existence.

Trans-dimensional Serpent is a VR work that allows visitors to sit and experience a white snake-shaped object.
The exhibition space is composed of yellow-painted floors and walls, and viewers can experience the work while sitting on the snake.
The sketch in the third image shows that the computer was supposed to be attached to a floating part of the snake’s body. 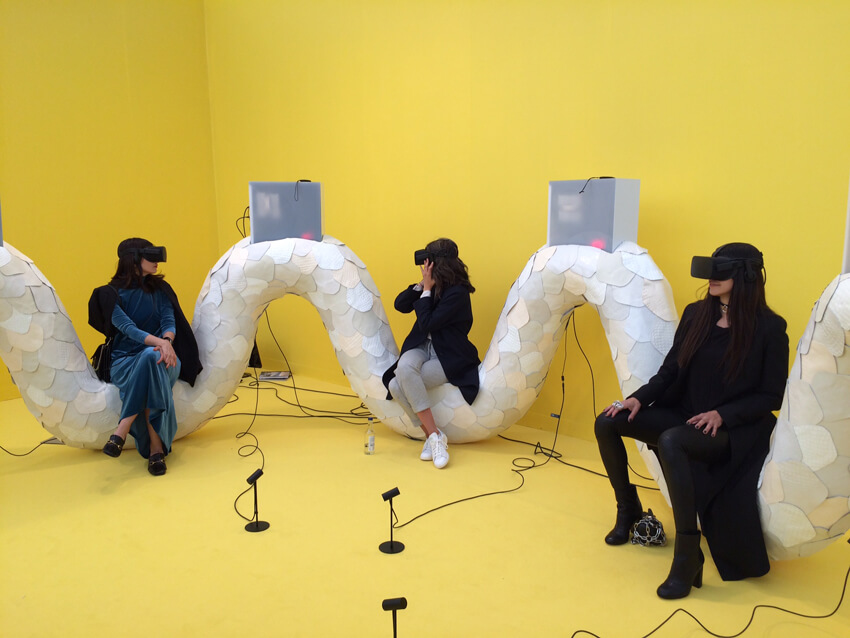 The viewer experiences VR in the form of sitting on the snake. 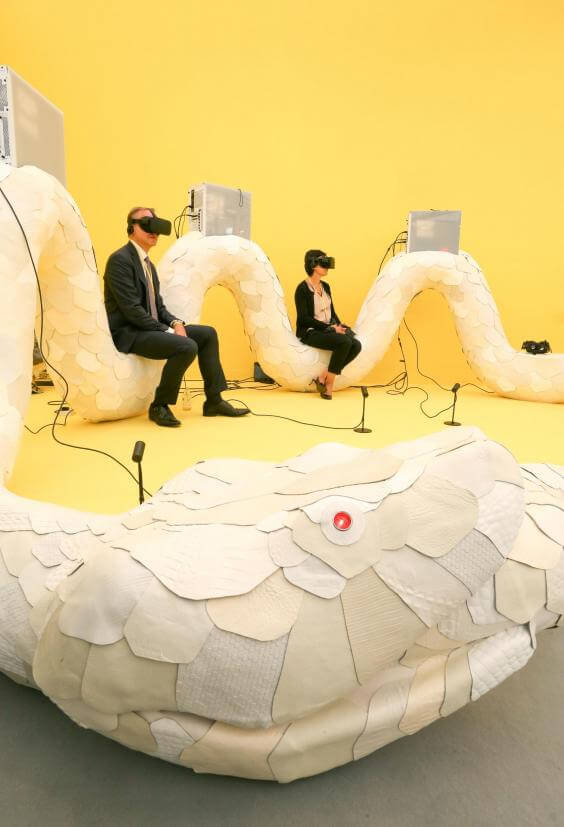 The snake object that the viewer sits on 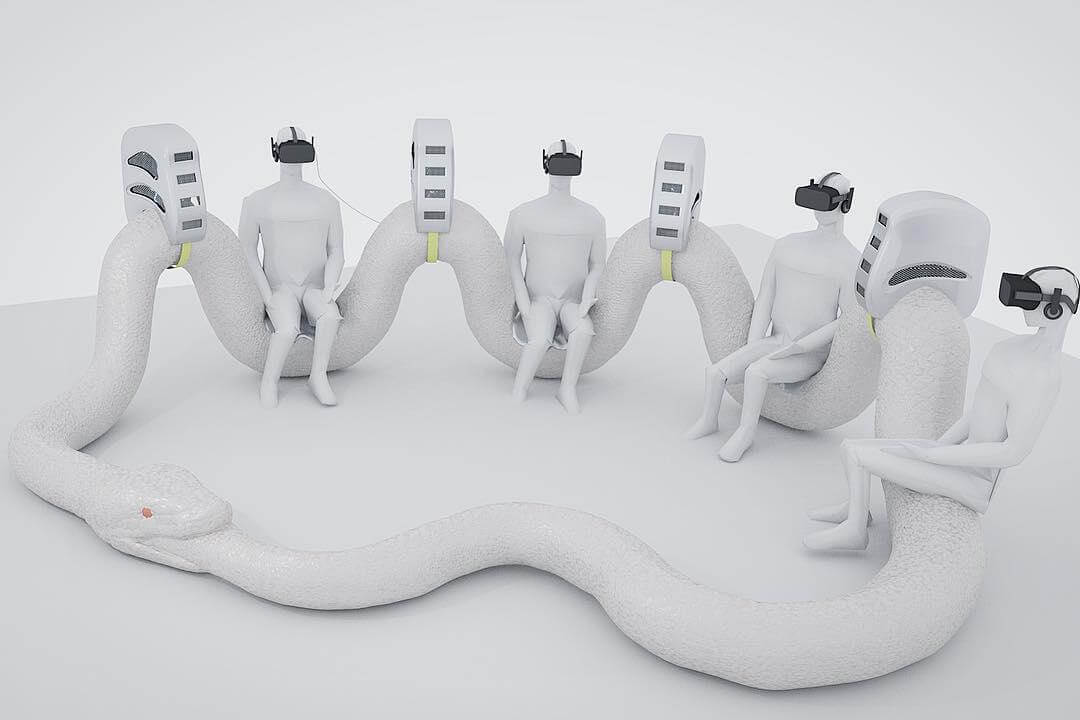 3DCG of a sketch of the exhibition space

The video of the work is below (*for adult viewers).
Within the VR space, the snake you are sitting on groans, and the viewer sitting next to you also screams, creating a continuity with objects in the real space.
The distinction between reality and fiction is ambiguously portrayed by showing not only monsters and other imaginary life, but also places such as the back alleys of a city, and in scenes where the scene changes, the snake swallows the viewer and the system that drives the HMD itself is displayed, creating a multilayered structure of reality and fiction for the viewer who is watching the VR with the HMD while sitting on the snake eating its own tail.

Produced by Ho Tzu-Nyen and YCAM, “Voices of Void” is a video art and VR work that presents the arguments and poems exchanged by Kyoto School scholars.
Ho Tzu Nyen is a Singaporean artist who uses motifs indigenous to Asia and Japan, but also works across multiple disciplines including video, installation, theater and sound art.

The most distinctive point of this exhibition is the arrangement of four rooms with video art displays and a VR space in a T-shape.
The four rooms with displays and projections are arranged in a vertical line, and in the fourth room at the far end, there is an HMD.
Within the HMD, the three VR scenes of standing, sitting, and lying down are switched in vertical positions.
The fourth scene can also be accessed by not moving the HMD.

As the viewer moves forward, he or she is transported into the narratives of the characters in the hall, echoing across the multiple images.
Finally, by entering the HMD, the viewer is encouraged to become more immersed in the imaginary world.
This effect is enhanced by the spatial interlacing of the images in the space leading up to the HMD, and by the presentation of the inside of the CG when the 3DCG shown in the images passes through the mesh and enters the CG. 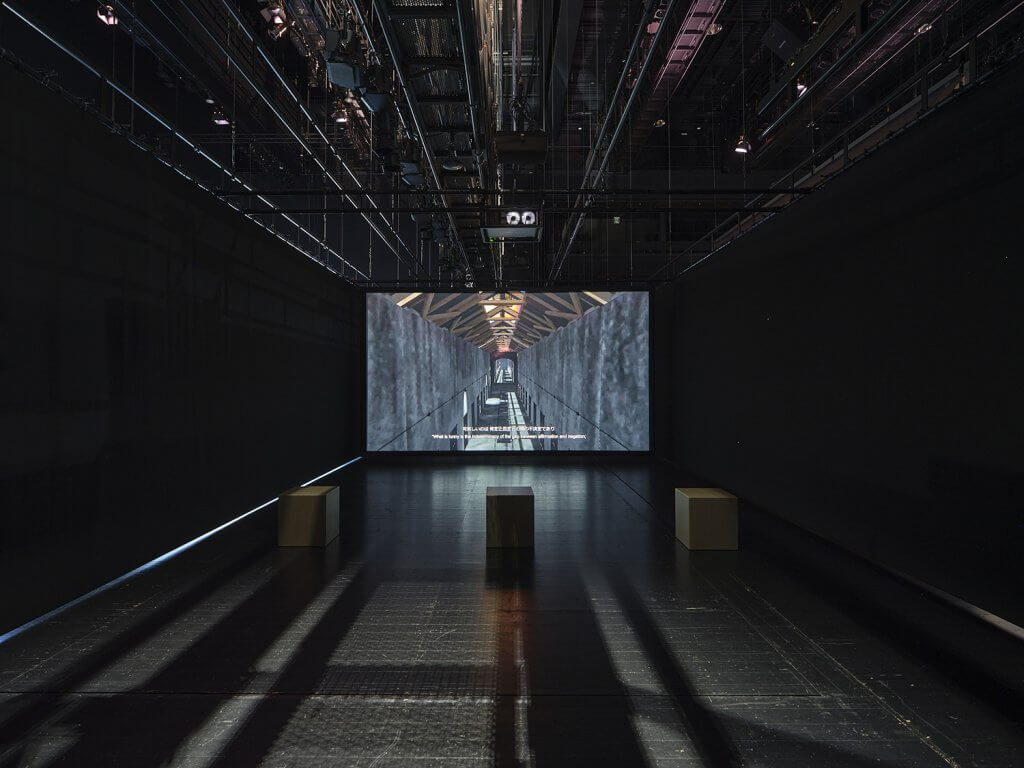 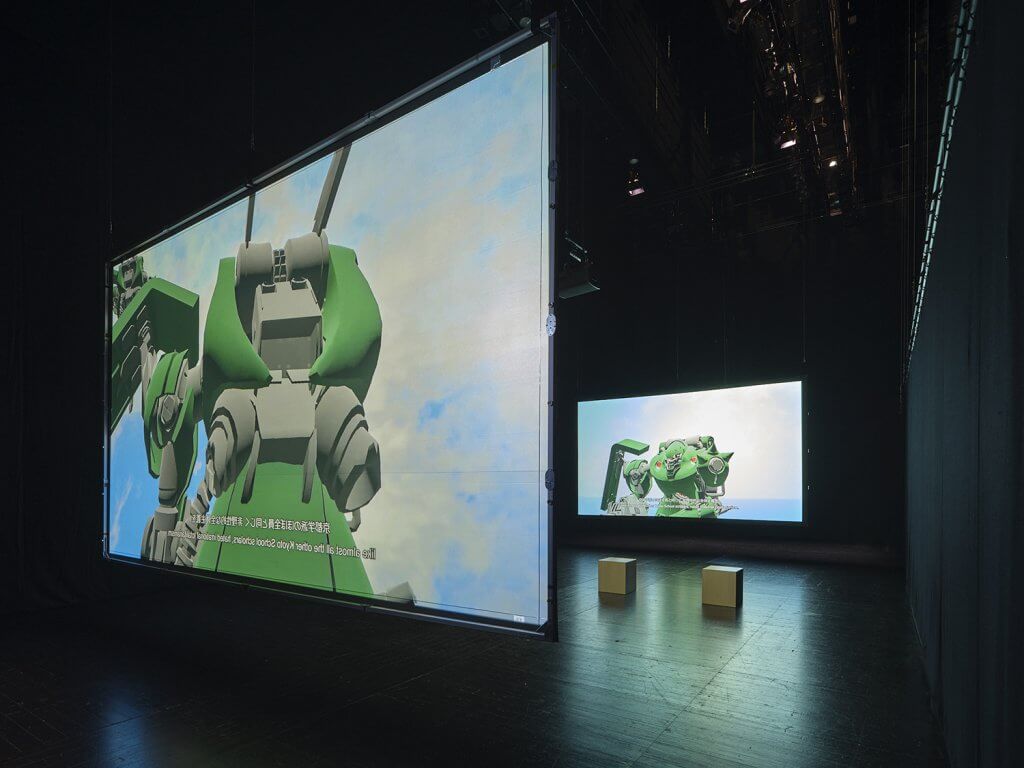 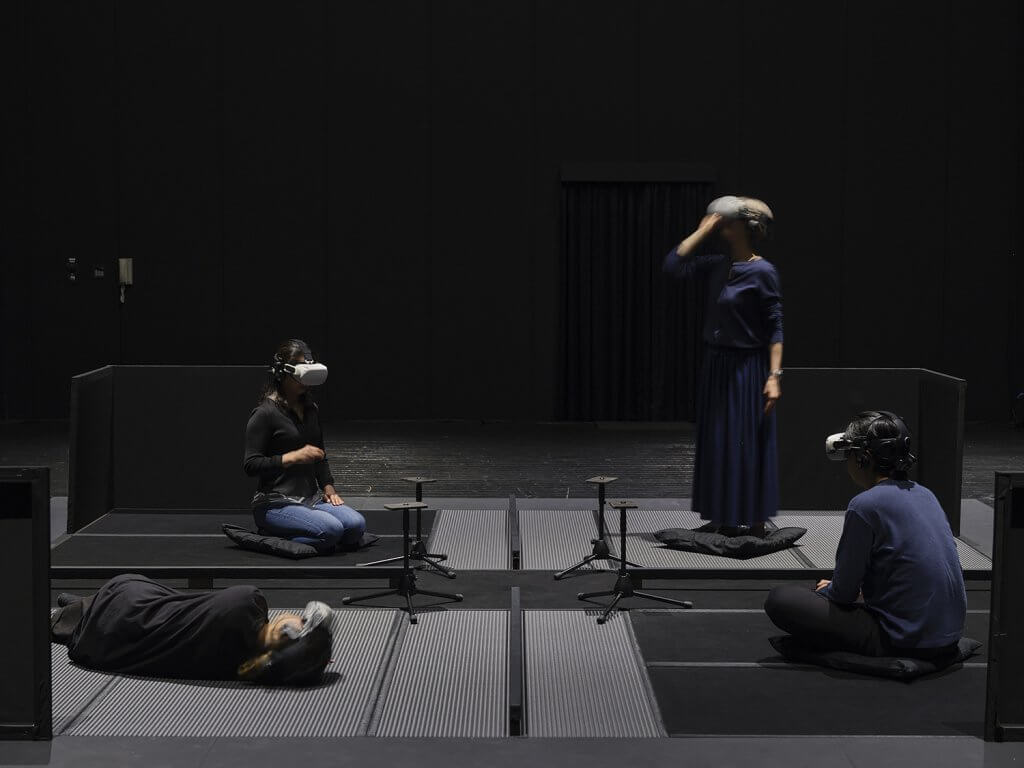 A trailer of the video installation is below.
You can see the multiple voices and images echoing each other in the work, and the unique sense of distance to CG and VR.

Bound Prometheus is a work that was selected for the Grand Prize at the 2020 Media Arts Festival.
The creator of this work, MEIRO KOIZUMI, has created a number of works that incorporate the techniques of theater and performance into video, including VR works on issues of public and private that are important to Japanese culture, as well as political and physical first person (MEIRO KOIZUMI HP).
In this work, the structure of the work itself is the work, and noticing the structure itself is the heart of the viewing experience.

There are three main things that viewers can experience in this work.

*MR goggles here refer to HMDs that can display the VR space on top of the real space while transmitting it.

The venue is mainly composed of a black floor and walls, except for a circular pattern that serves as a guide for viewers to stand at the beginning and an abstracted mountain landscape on the wall, but the exhibition is designed to be an object for other viewers to appreciate. The trailer video is below.
The objects in the VR and the decoration of the venue itself are simple, but it can be said that the relationship between the viewers is easy to see.

Marshmallow Laser Feast「In the Eyes of the Animal」

This work allows you to move through a forest in the UK from the perspective of a forest creature.
It is composed of 360-degree video, laser scanners, and CT scans.
The project’s main body, ABANDON NORMAL DEVICES, not only supports the concept of experimental art, but the structure itself aims to subvert preconceived notions of what an arts organization or festival should be(quoted from HP). 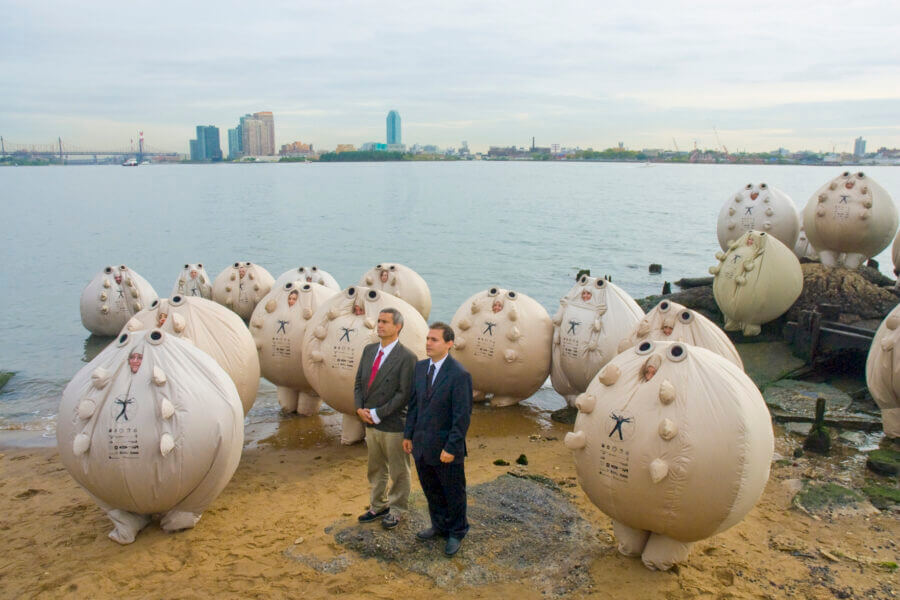 The enclosure of this work is a helmet that looks like a visualization of entering the forest itself.
The play area is also like sitting on a stump in the forest, giving the viewer the effect of connecting the images projected in the HMD with the real world.
This work was created as part of a project related to nature conservation, with the intention of engaging urban dwellers in the project by helping them discover the perspective of natural life.
The work utilizes VR not only as a way to present a performance in the city, but also as a way to present a different way of looking at reality.
While combining real-time rendering (a method of drawing 3DCG as it comes into view at each moment) and pre-rendering (a method of drawing what has been simulated and visualized beforehand) as perspectives unique to VR, I have also achieved a combination of the fact that the forest is there and the acquisition of the perspective of entering the body of a creature other than myself in that forest. Exhibition (project) 1 Image of the enclosure Exhibition (project) 2 The tour itself is also an experience. Images projected in VR simulate the physical sensations of other life. At the museum, the images were displayed in a 360-degree view, and visitors were able to walk into them.

The trailer video is below.
The quality of the VR content itself is high, so please take a look.

In this article, I have been referring to examples of exhibits about the outside of the images shown on the VR display.
You may find interesting expressions if you think of ways to involve the viewer while letting the worldview projected in the VR seep into reality.