This article introduces “gaze on me,” a VR work that won the NEWVIEW AWARDS 2020 SILVER PRIZE.

“gaze on me” is a work created by Miki Nigo, an artist living in Germany.

Miki Nigo participated as a student intern at NEWVIEW SCHOOL and won the NEWVIEW AWARDS that year.

We will read about the theme of “gaze on me”, “Seeing,” and introduce some points for viewing. 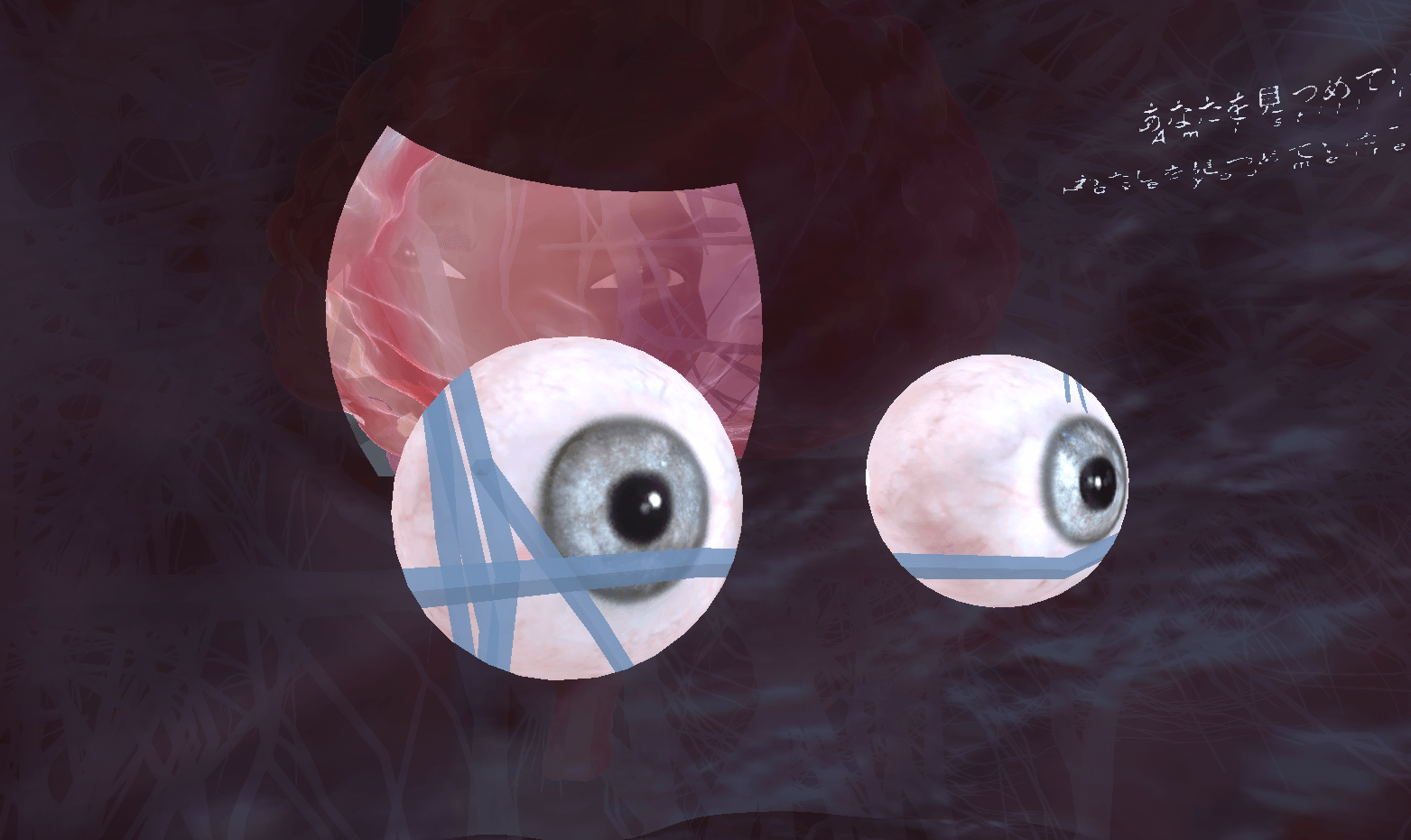 Miki Nigo is an artist living in Germany, working mainly in the field of 3DCG/installation, and after her encounter with STYLY, she has expanded into the field of XR.

Her past 3DCG works include a Music Video for Japanese experimental/industrial musician “BROKEN HAZE”.

For “gaze on me”,  she was awarded the NEWVIEW AWARDS 2020 SILVER PRIZE.

Based on installations and 3DCG production, “gaze on me” was created using XR’s point of view as an artist.

Immersing oneself in the human body, Miki’s questioning of the act of “seeing” became a work of art directed at the viewer, and attracted many people.

About “gaze on me”

This work asks questions about the structure of the act of “seeing” and our emotions.

When the scene begins, a huge smiling human figure appears in front of us. 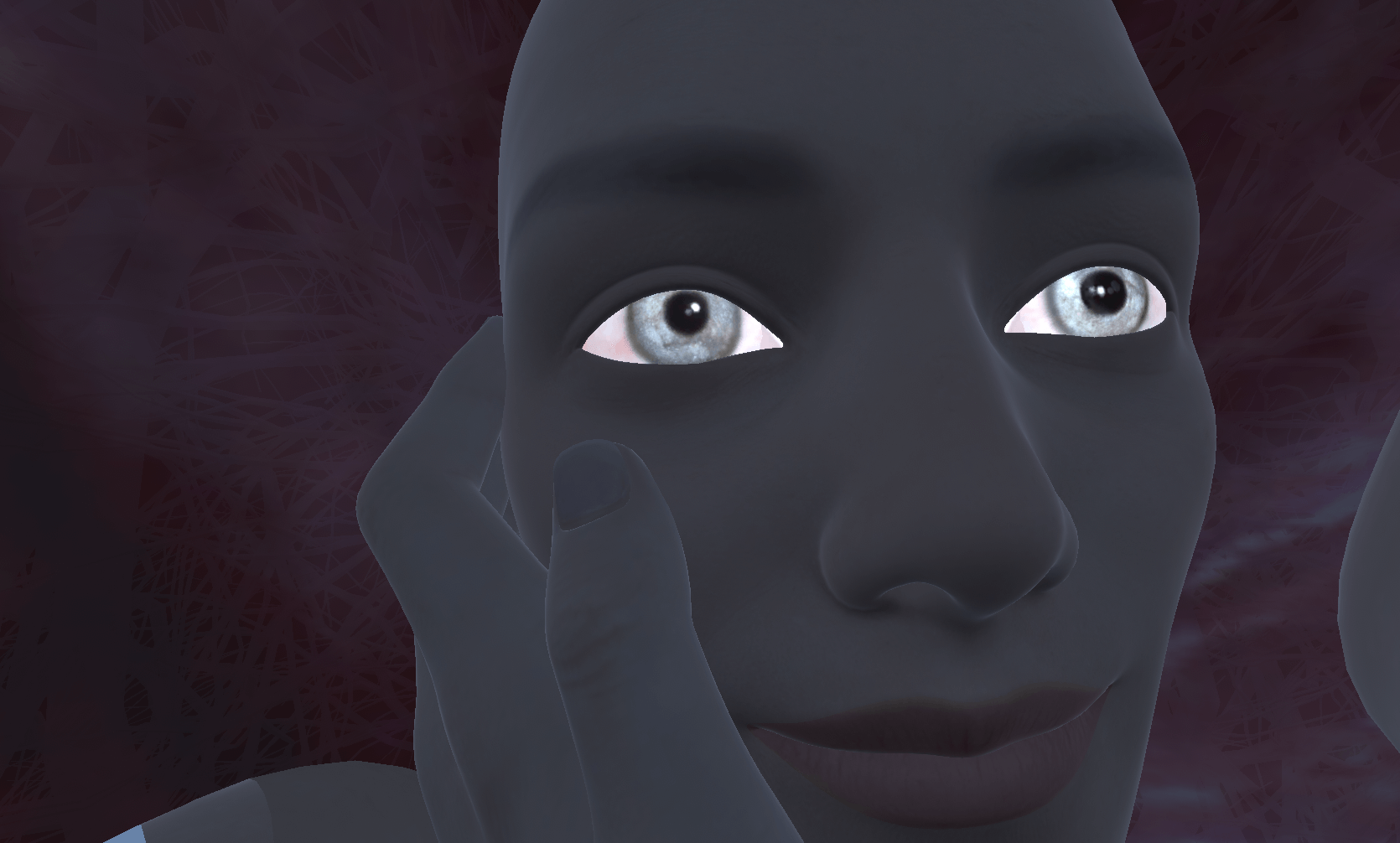 On the other side of the viewer’s gaze, there is also a huge smiling human being. Touching each other’s cheeks.

The camera moves automatically, the scene changes, and a “nerve”-like object overgrown like a tree, two eyeballs, a brain, and an “image” appear in space. 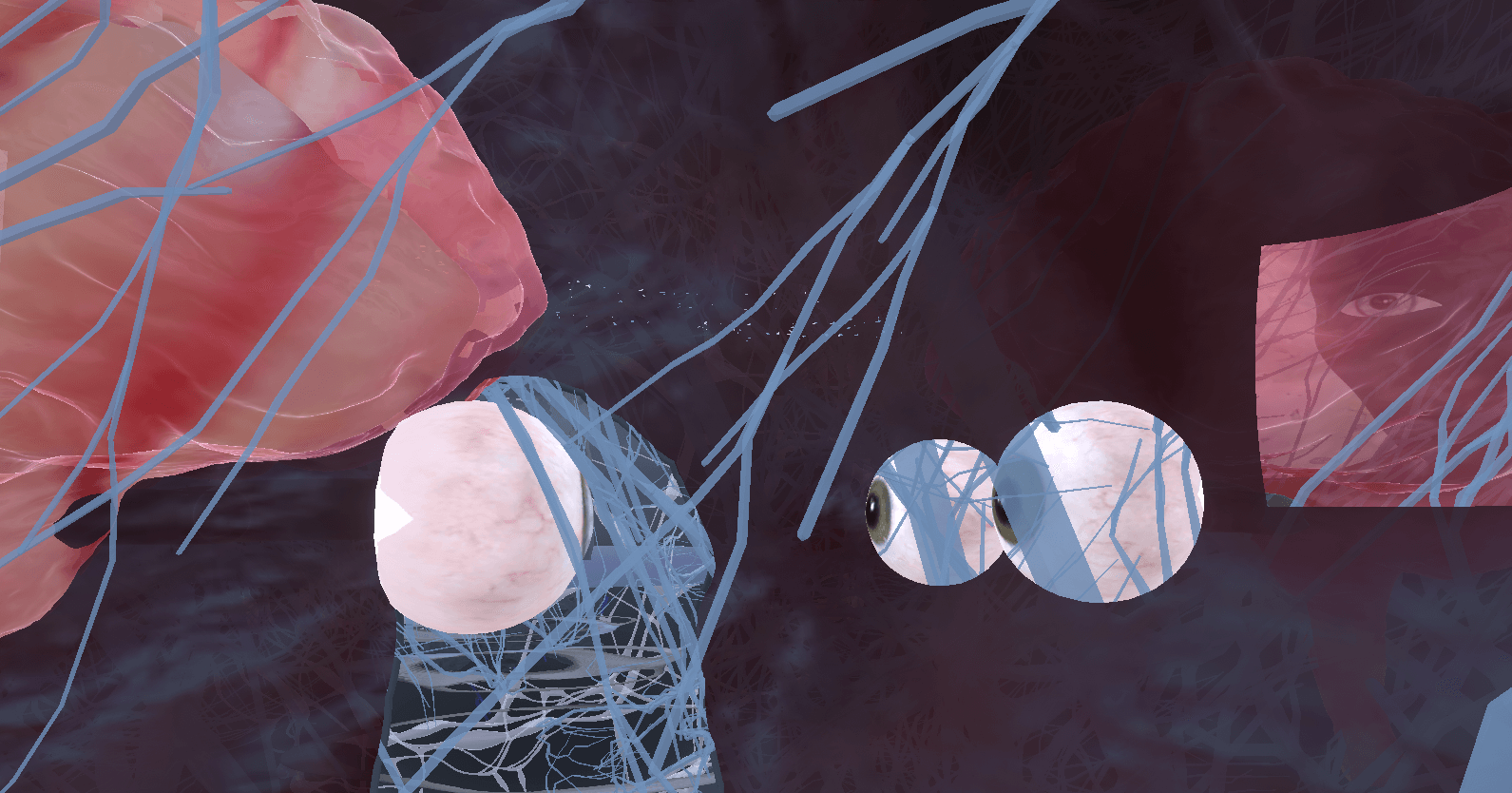 Is it a person’s body?

In the space, there is a message that looks like a poem.

“Am I still I who was gazing at you?”

“Have you melted with me as you gazed at me?” 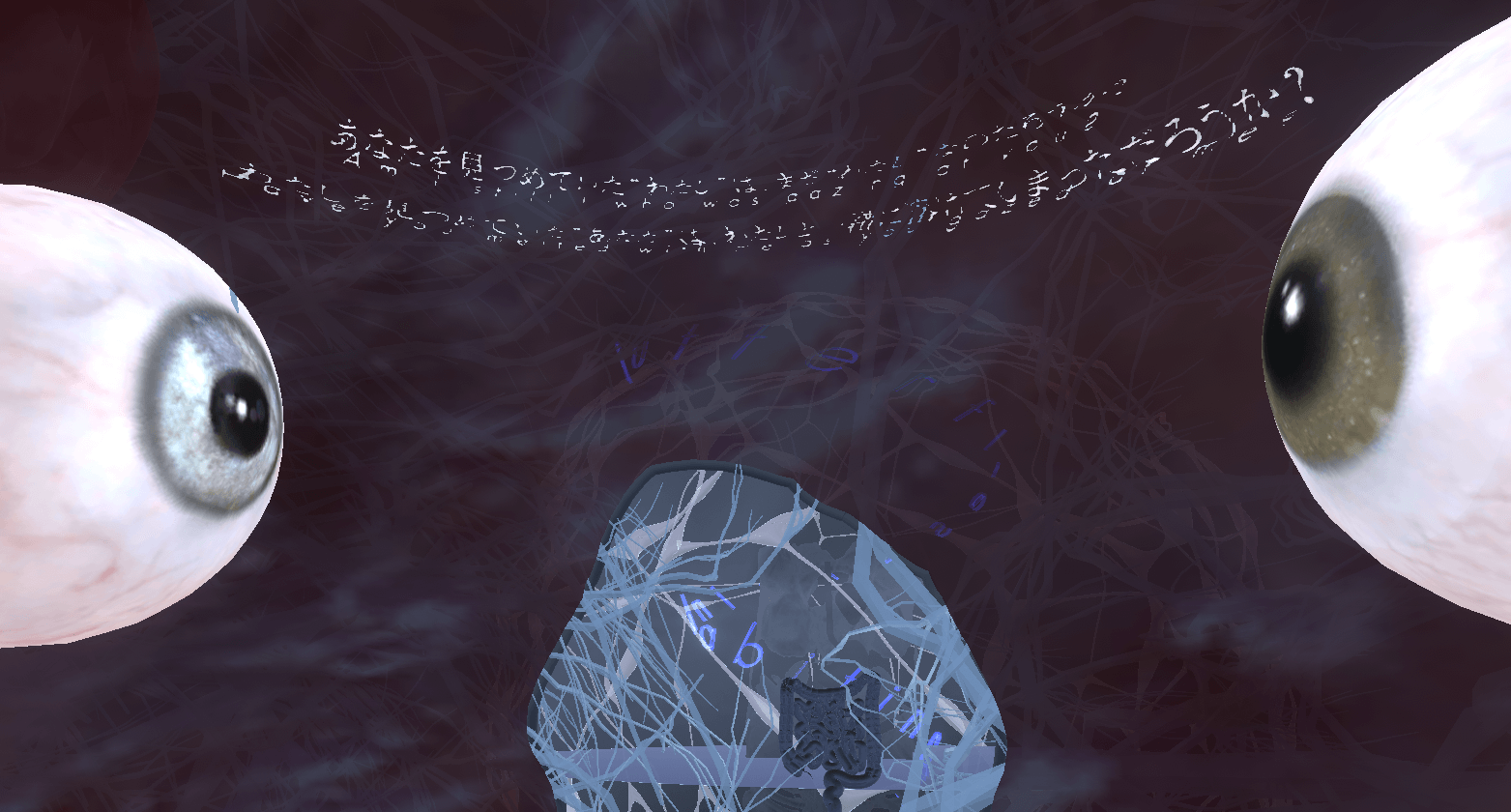 Then, as you move further in, you see a visceral object covered in a cell-like space. 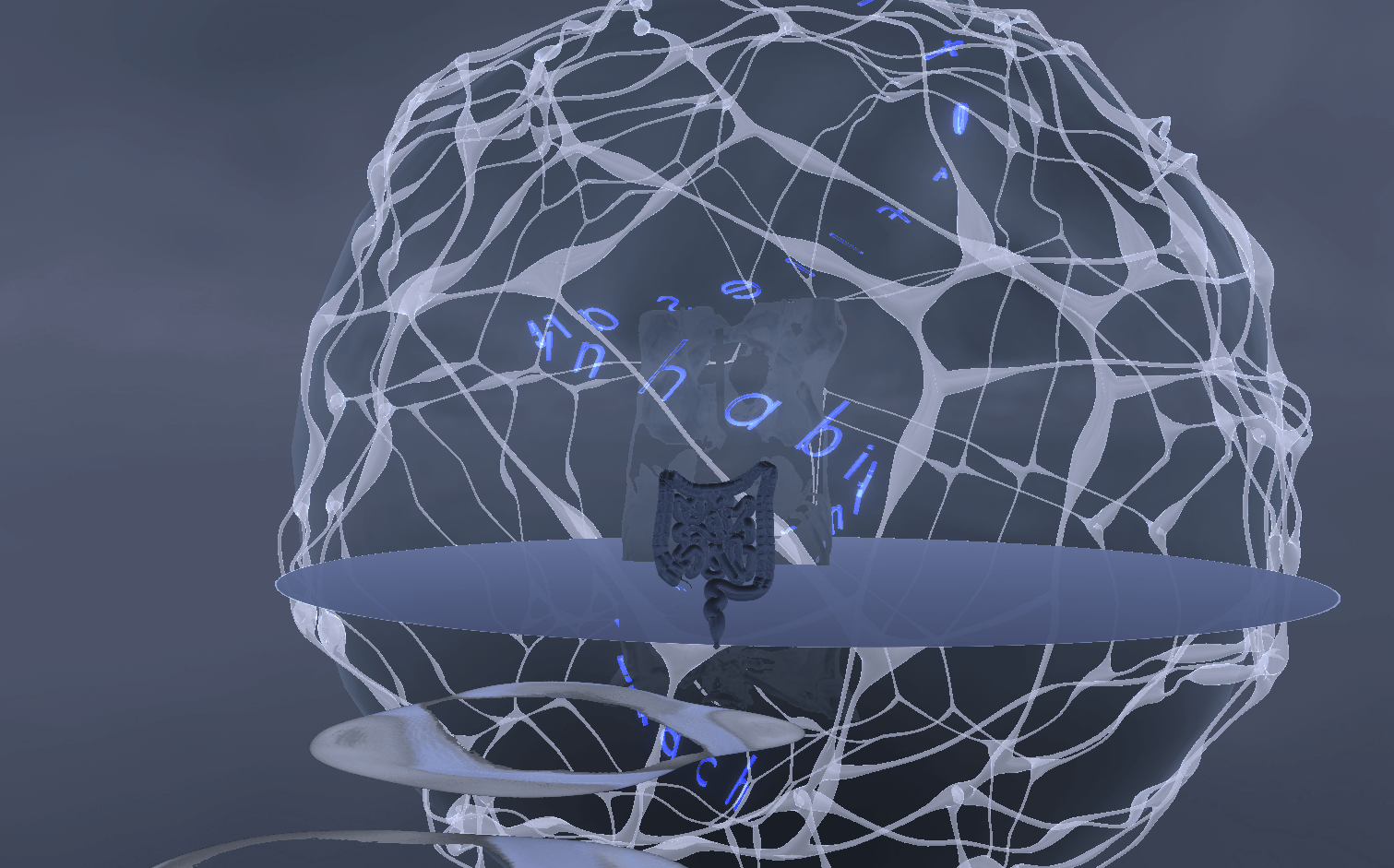 Based on the objects and messages, here are some of the features and interesting aspects of viewing this work.

Our ability to “see” the world through our eyes is made possible by the mechanisms of our eyeballs, nerves, and brain.

The major mechanisms are as follows.

When light enters the human eye, it is bent by the lens behind the cornea, passes through the glass body, and forms an image on the retina at the back of the eye. The retina is lined with many photoreceptor cells, which transmit signals to the brain when stimulated by light. The optic nerve is responsible for the transmission of information from the photoreceptors to the brain.
The image on the retina is actually an inverted image, but the brain converts the information into an upright image, which is what we perceive.

*Quoted from “How the Eye Works” (Telescope and Observation Equipment, Shokabo https://www.shokabo.co.jp/sp_opt/observe/eye/eye.htm

This work embodies this mechanism with a 3DCG model. 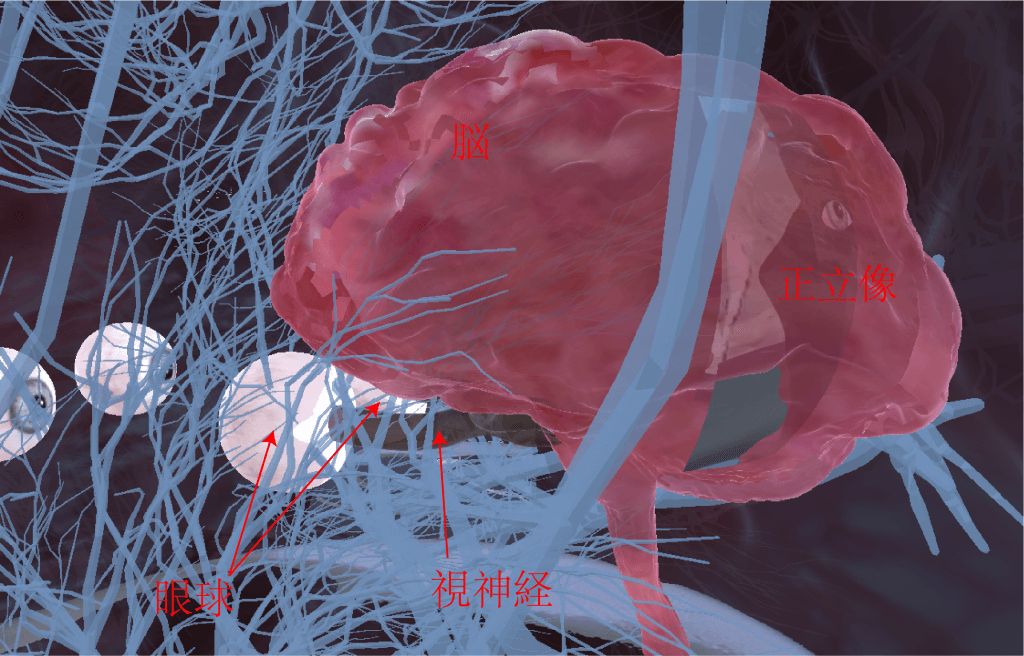 The Mechanism of Seeing

While VR works can be created freely without the need to simulate reality, citing reality based on scientific facts can be read as a structure that questions the reality in which we live.

The virtual is an alternative space to the real, and at the same time it can exist as an approach/counter to reality.

Through her approach to human science and the embodiment of 3DCG, Miki is using the virtual to approach the real.

Throughout her works, we can read what she is approaching in the real world based on the figurative.

Miki offers the following explanation for this work.

*Quoted from the page of NEWVIEW AWARDS 2020 “gaze on me”  https://newview.design/works/gaze-on-me/

The people we love are probably our friends, family, lovers, and colleagues.

When we meet our loved ones, we look at them and recognize them. At that time, emotions arise in us.

I feel that the point of Miki’s work is to observe these emotions and “seeing”.

Emotions are a phenomenon that has been studied scientifically, but at the same time, there are many areas that cannot be expressed in words or science.

In contrast to the scientifically understood act of seeing, how does the unknown phenomenon of emotion shape our existence and perception? This exhibition will be a space to think about this question while viewing the works.

The phenomenon of “melting” in this message may be a question about the boundary between “me” and “you”.
By observing through the two phenomena of “seeing” and “feeling”, we can think about the ambiguity of the boundary and the mystery of human beings beyond scientific observation.

The above is just my impression of the film. I believe that there are points in this work that can be appreciated more broadly than that.
I think it is interesting to look for these points while viewing the work.

Acting as a VR medium

Lastly, I would like to review the act of “diving into the body” using VR.

When I watched this work, I noticed that it expresses the act of “diving into the human body” using VR. I found this point interesting as a medium.

With the spread of VR in Japan, most of the works that have been released have been “virtual world” experiences in the realm of animation and games, or architectural visualization.

This work, however, is neither a virtual world nor architecture, but an approach to the “human body”.

I felt that this approach could be an extension of the game and manga content that has depicted VR.

For example, in the manga work “Ghost in the Shell” by Masamune Shiro, there is an electronic brain called the dennou. Through this brain, various cyber incidents occur and the story unfolds.

Also, in the game “CYBERPUNK 2077” released last year, “Brain Dance” appears as an evolutionary medium of VR. This is a device that allows you to “experience” the memories, experiences, and emotions of others all as they are.

These two media as so-called “VR” are described as devices that allow us to go beyond monitor-like experiences and experience them through a “brain science” approach.

In current VR, “pseudo-experiences” are the norm due to the performance of the devices. However, if it were possible to dive into another person’s brain or body, as in science fiction works, the content of the work itself would change dramatically.

Miki’s work seems to hint at such a future.

“gaze on me” brings a space and experience to think about human beings. By entering this space, you may be able to reaffirm how you perceive yourself and others from a scientific perspective and in the process of thinking. 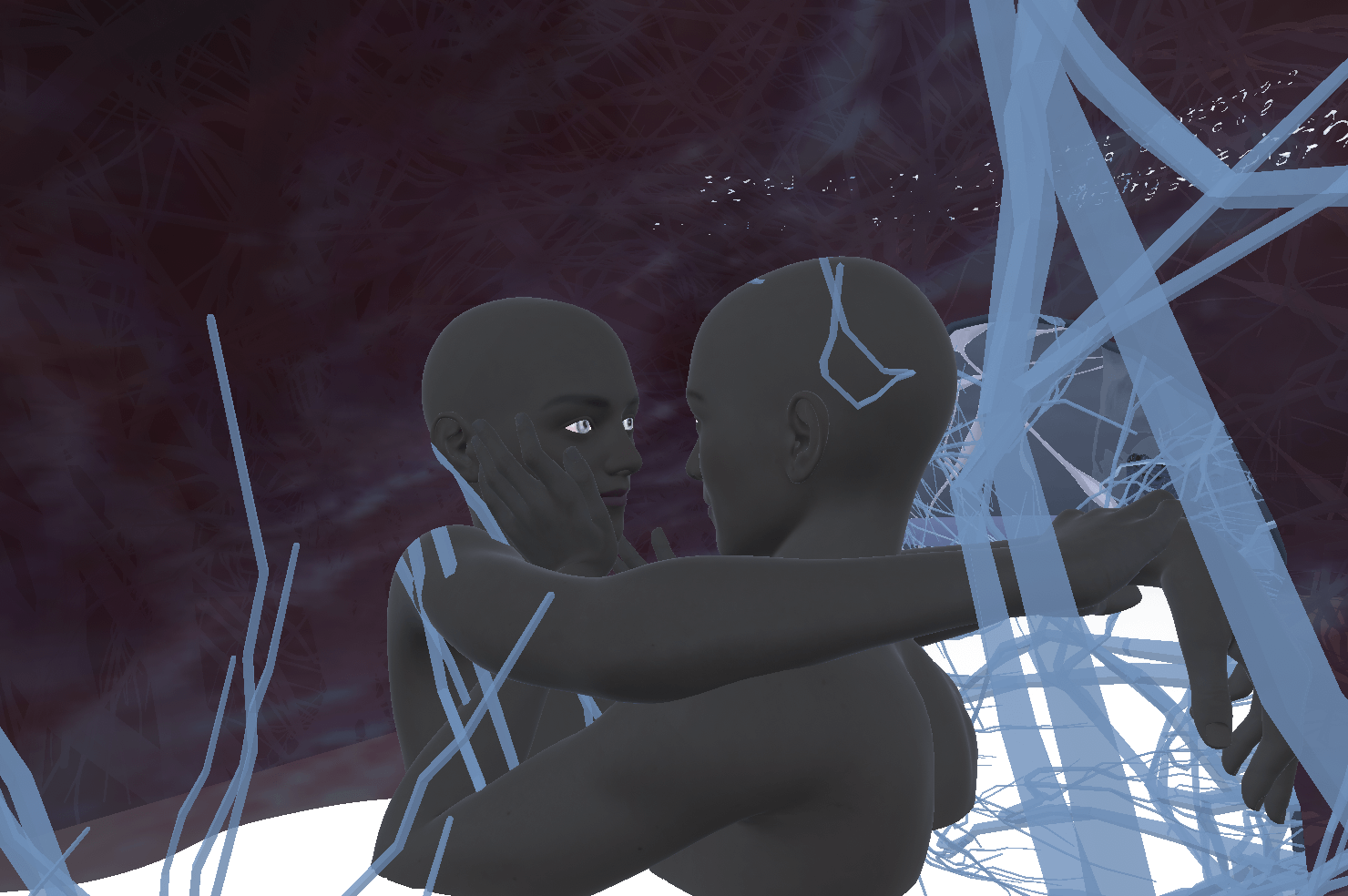 NEWVIEW SCHOOL ONLINE is an online learning site where you can learn Unity and PlayMaker from basic to advanced, and learn the production process (and production techniques) of the attractive contents distributed on STYLY!