The following is an introduction video of the work.

Please increase the brightness of your PC or smartphone screen to view the video. 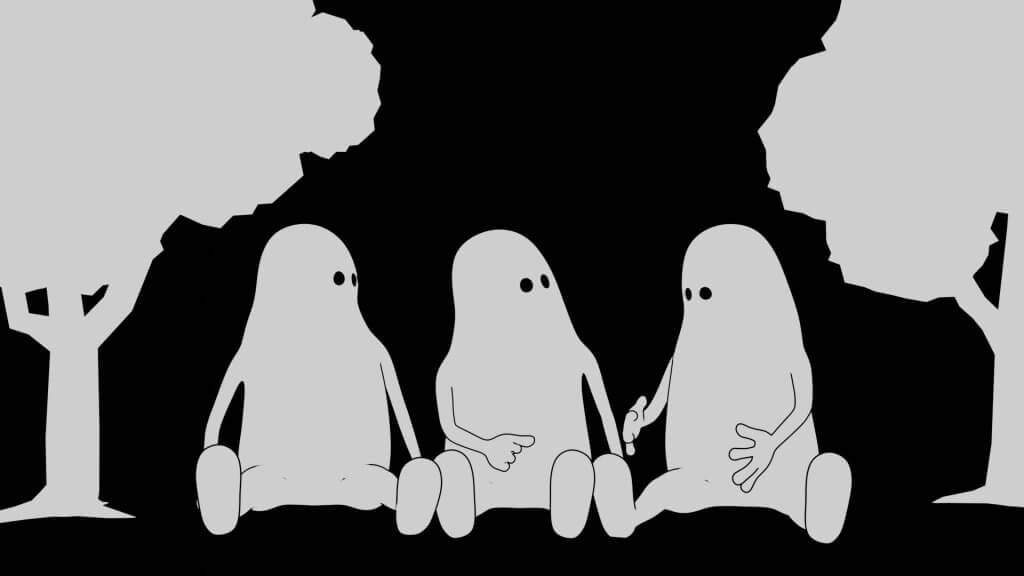 How to experience “behind” (PC and smartphones are deprecated)

Description of the work by the author

In addition, by using minimal black and white animation, the artist attempted to portray the front side of the story (=white creatures) and the back side (=humans) in an equivalent manner. In this work, he depicted the industrialization that is proceeding unchecked behind the white creatures living in the forest. However, this is not simply a condemnation of human activities that destroy the environment. Just as there are human activities behind the white creatures, there is a background to the humans being represented in black.

The aim of this film is to provide an opportunity to imagine what is behind things. 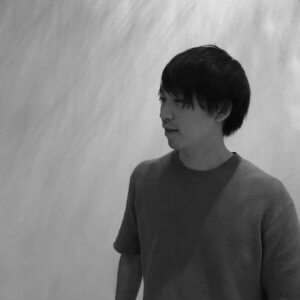 Works as a cross-disciplinary designer and artist.

I think of the Bergman film The Silence, the one where they are traveling through a foreign city where there seems to be a revolution going on but they don’t understand a word of the language. It’s like Ruskin’s using the old, shopworn, novelistic image of the theater—with the unfolding of the drama before him a metaphor of the unity of the world’s great stage—except that he’s a deaf-mute and can only see the scene as patterns and colors and lines.

In “behind,” two screens are presented to the viewer alternately.

Although the two screens overlap and can be viewed simultaneously, the story begins as if there is no causality between the events on the two screens.

This composition uses the technique of “deceptive painting” as typified by the works of Maurits Escher.

By blurring or inverting the “ground” and the “figure” used in art, this technique gives ambiguity to the existence and meaning of the image, or re-presents it as something else.

When two areas exist in the visual field, only the shape is visible in one area, while the other area forms the background. The part of the image that is perceived separately from the background (the shape) is called the “figure,” and the background is called the “ground.” The term “figure-ground” was first used by the Danish psychologist Rubin in 1912, and is a key concept in Gestalt psychology. The melody is heard prominently, while the accompaniment is perceived as receding into the background. Thus, figure and ground appear in each aspect of perceptual experience, especially in visual perception. In general, the figure has shape, contour lines, and material properties, and its surface appears solid, well-defined, and raised. On the other hand, the ground has neither shape nor contour lines, but has material properties, and its surface appears soft, ill-defined, and uniformly spread out behind the figure (Shogo Imai).

Compared to many VR works, “behind” may at first glance appear to be an ascetic work.

This is because VR, which allows various objects to be placed in a space using 3DCG, is often seen in works that use a variety of colors and shapes.

By placing the 3DCG objects on a single black and white surface, the artist attempts to create an ambiguity in the image by mixing the ground and the figure on that surface.

Differences and maldistribution among beings

Now, what kind of relationship will the beings divided into black and white show in this work?

The fact that places and times that are invisible to each other exist independently of one another makes 《behind》 a work that is typical of virtual reality, showing the disorder of fictions.

The worlds created by today’s virtual reality are often based on reality, but are somewhat unrealistic.

The reasons for this are often to reduce the physical simulation of light reflection and transmission, to avoid the limitations of current devices and software for experiencing and creating virtual reality, and to depict 3DCG with incomplete reproducibility.

In turn, they emphasize the fact that the physical laws of the virtual space are discontinuous with reality.

VR spaces are in disarray. And while you are in one VR space, you cannot see another VR space.

An event or story is occurring separately in each space.

When you enter one virtual reality space, you can forget all other places exist.

At the same time, however, we are forced to remember all the forgotten worlds, and we are participating in a situation where we are presented with an unnatural reality.

In addition, “behind” evokes the world of non-human others.

On the black-painted side, human economic activities and wars unfold.

In contrast, the existence of the creatures on the white-painted side is uncertain, and it is unclear whether they are animals, ghosts, or fictional characters of some kind.

The humans move with gestures as if they do not see or care about the existence of this white-painted entity.

On the outside, it shows the virtual perspective of the animal or object.

This also points to the fact that the ideas that we share, such as words and concepts, are fictional.

For example, what Hiroki Azuma read as the “negative theological system” in “Ontological, Postal: On Jacques Derrida” (Shinchosha, 1998) was exactly such a logic. In other words, there is only one “unspeakable thing”-the “impossible thing”-that cannot be captured even if one tries to directly ask what it is, and yet because of its existence, a system of meaning is formed around it.

This is the position of seeing plurality outside the hole of the single back. In other words, he (Marcus Gabriel)* says that it is multiple heterogeneous fields of meaning that form this world existentially, and that each of these fields of meaning has a different type of being.

In “behind,” Takahashi uses a deceptive composition that reverses ground and figure to visually represent what is taboo and what we try not to see in each other.

This is not just to represent ideological or linguistic differences, or the structure of opposition, for example, between the West and the East.

The work also represents a paralyzing sense of crisis regarding contemporary taboo issues.

This is a work in which not only problems that are easy to see, but also things that we suddenly realize have been paralyzed, and things that we have forgotten to put “behind” us, appear as taboos.

The black-painted people and the white-painted beings look at us, reminding us of what is behind us that we have forgotten.

Or what is it that their backs are telling us?

And what is the virtual reality that surrounds them/us?

You may have already noticed that there is a blacked-out person in the above scene.

How to experience “behind” (PC and smartphones are deprecated)