In this article, we create a ‘singing-and-dancing’ live space with the ‘particle’ effect and the model created with VRoid  Studio.
By applying this method, you can create your favourite live-performance space by using your original model, playing other songs or creating your original particle performance.

I will show the instruction in the series of four separate articles, which consist of Chapter 1 to 11.

This article covers Chapter 7 and 8, showing how to create a stage and construct a ‘live performance’ by using ‘Timeline’.

We use ‘Ultimate VFX (Unity Asset)’ to create a stage with the particle effects.

The whole workflow is as follows.

Ultimate VFX is a collection of particles, which is an Asset downloadable from Asset Store.

Although it is a paid Asset ($40), I recommend it because it has 100+ very high-quality particles that allow you to create various expressions by combining and customizing them.

In addition, please note that the sample with C# scripts doesn’t work in STYLY.

*In this article, I’m using Unity2017.4.3.
Click here to check which Unity versions are compatible with STYLY.
https://document.styly.cc/doc/docs/en-US/creator/creator_plugin_intro/#about-the-corresponding-unity-version
Basically, the functionality is almost unchanged, so you should be able to create it without any problems.

Create a project for Ultimate VFX

Since the size of the Asset is large, we create a separate project with Unity2017.4.3 to access the sample particle.

Before importing the Asset, set up the project as instructed by the following document: 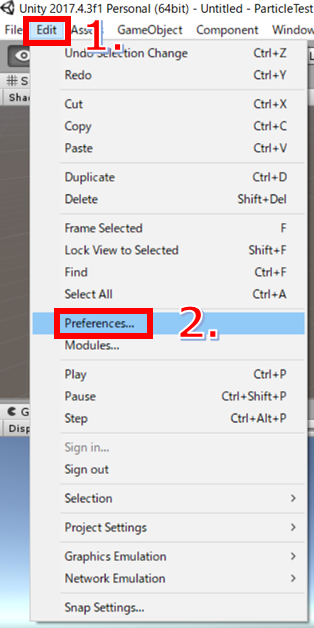 Uncheck the ‘Compress Assets on Import’ box on the General tab. The preparation has been done, so now download and import the Asset.

Confirm that the ‘Mirza Beig’ folder has been created. 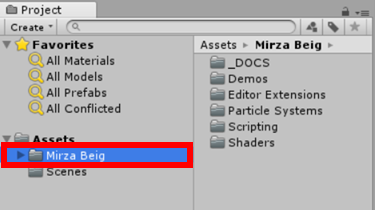 Find your favourite particle from the sample Scene

In the Project window, press the ‘Search by Type’ button and select ‘Scene’. 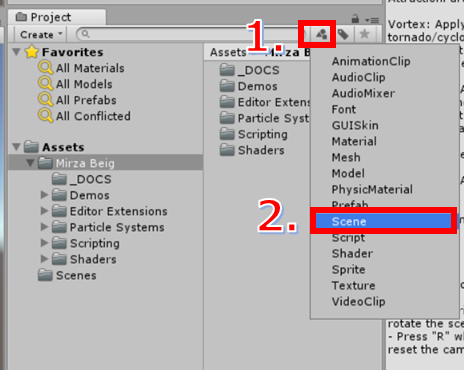 It will find multiple Scenes. Each Scene starting with ‘1 -‘ contains a single particle. The others have combined particles.

This time, we select ‘1 – Ultimate VFX (Demo)’ that has the most variations of particles.

You can access multiple particles by playing ‘1 – Ultimate VFX (Demo)’ with Editor. The outline of the operation is as follows.

Export the sample as a package

Export the Prefab of your favourite particle.

As an example, I will export a particle called ‘stargate’.

In the Project window, enter ‘stargate’ in the search box.

※You can distinguish between ‘Looping’ and ‘One-shot’ by the name.

Please note the followings when exporting.

Since the Prefab with C# scripts cannot work in STYLY, how it looks in STYLY is different from how it looks when it’s played with the Editor.

To progress efficiently, I recommend checking if it doesn’t include any C# script by making a sample Scene and placing the Prefab in it.

For example, let’s check it for a particle called ‘plexus’.

Select ‘File > New Scene’ in the Editor menu to create a Scene for checking.

In the same way as we did earlier, find ‘pf_vfx-ult_demo_psys_loop_plexus’ and drag it into the Hierarchy window. 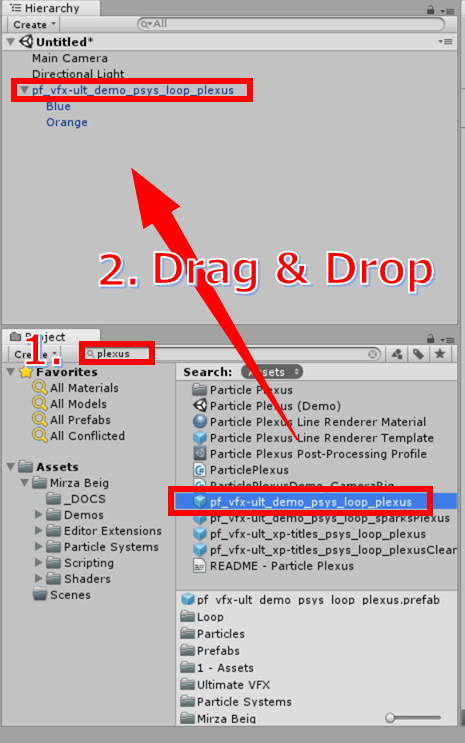 Since the object is deactivated, activate it and then click ‘Play’ on the ‘Particle Effect’ panel. If you see the image different from what was seen when it’s played with the Editor, it does include C# scripts.

The difference of the particle with/without C# scripts

You can also check if there are C# scripts with the Inspector of the child objects of ‘pf_vfx-ult_demo_psys_loop_plexus’, but it takes time as there are a lot of objects to check.

In addition, the ‘Ultimate VFX’ Asset includes the script to resize particles in a simple way, so export it too.

In the Project window, press the ‘Search by Type’ button and select ‘Script’. 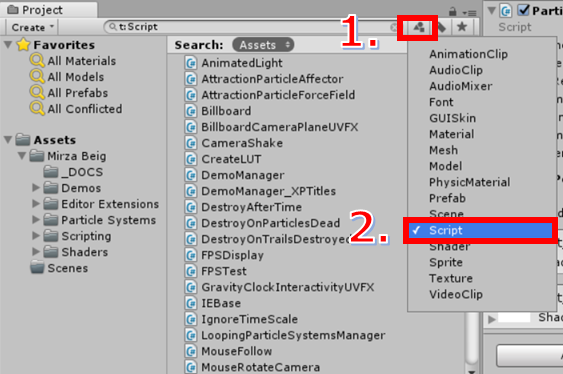 Select all the extracted scripts with ‘Ctrl+A’ and export them. 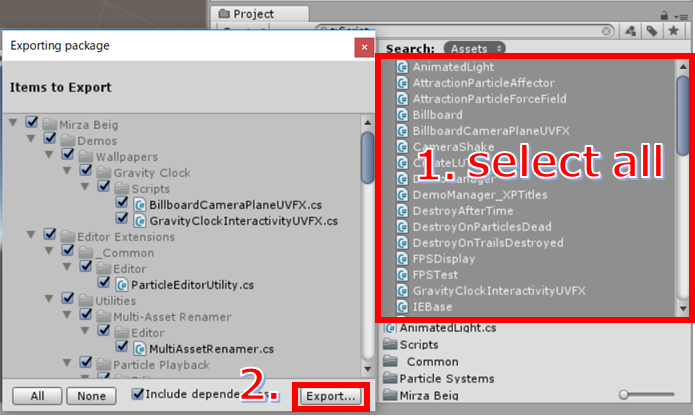 Import into the project you are working on

Import the Prefab and scripts into the project you are working on, and customize them.

Firstly, import the exported ‘particle’ Prefab and scripts into the project you are working on.

It creates the ‘Mirza Beig’ folder directly under ‘Assets’. Drag and drop the Prefab into the Hierarchy and activate the object. 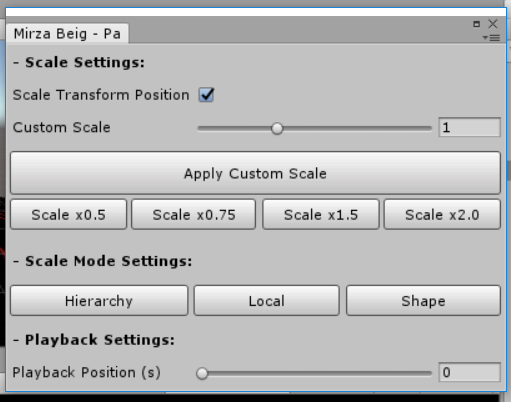 Adjust the scale of the particle

Pressing the ‘Hierarchy’ button under ‘Scale Mode Settings’. Then, you can adjust the scale as you like by using the ‘Custom Scale’ slider or the ‘Scale×0.5’ button.

Enable the created object to be controlled by Timeline.

Press the ‘Add Component’ button to add the ‘Playable Director’ component to the imported character. 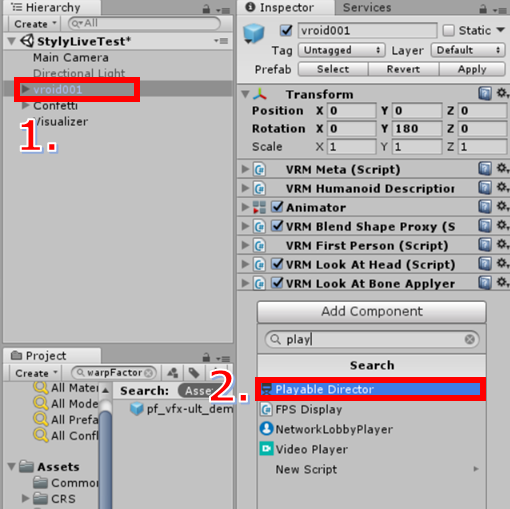 If the TimeLine tab is not displayed, select ‘Window >Timeline’ to display it. Since the TimeLine is created directly under the ‘Assets’ folder, move it under the TimeLine folder and rename it ‘ParticleLiveTL’ for better visibility. Drag and drop ‘ParticleLiveTL’ into ‘Playable’ in the ‘Playable Director’ component. 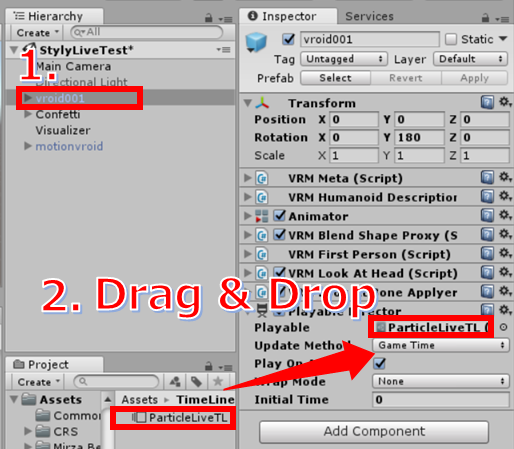 The setting for Playable Director

Set ‘Controller’ in the ‘Animator’ component to ‘EmptyAnimator’ (See the screenshot below). 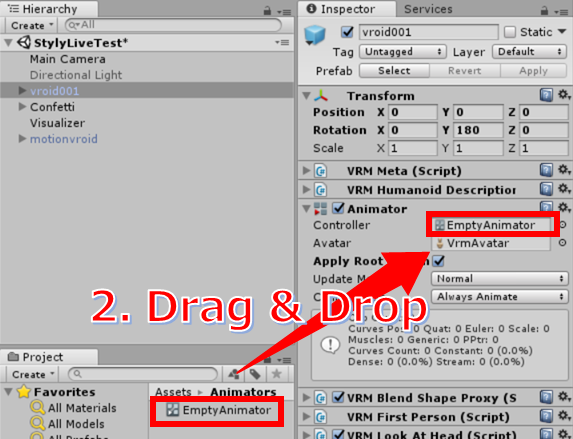 ※This empty Animator was created by right-clicking and selecting ‘Create > AnimatorController’, and renamed to  ‘EmptyAnimator’.

Set up the animation for the character

Select the character in the Hierarchy window and set up the animation in Timeline editor.

In the Timeline editor, select ‘Add > Animation Track’ to create a Track. 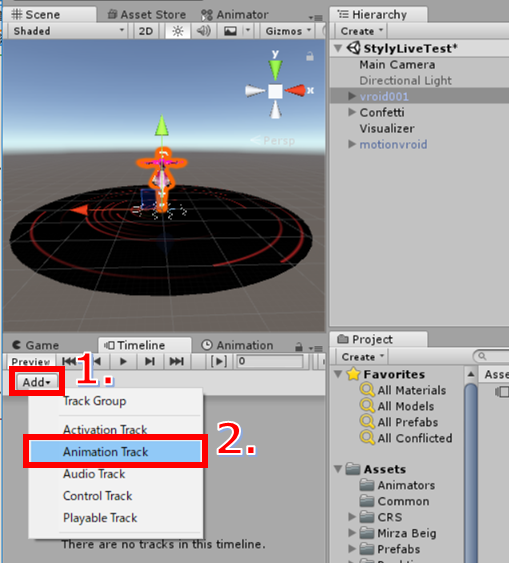 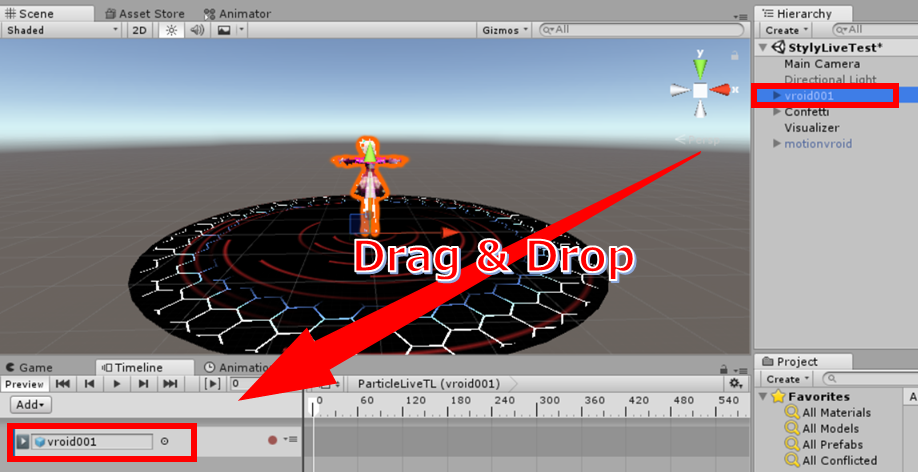 Assign the character to the GameObject of the Track.

In the Timeline editor, select ‘Add > Audio Track’ to create a Track. 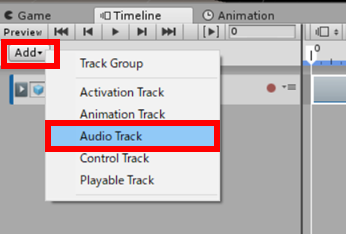 Drag and drop ‘Unite In The Sky (full)’ into the Clip. Select the Clip and set the ‘Start’ of ‘Clip Timing’ to 2 (i.e. starting in two seconds).

Assign ‘Unite In The Sky (full)’ to the Clip

By the way, the Play button on the Timeline editor doesn’t playback the song.
※In Unity2018, you can playback it by pressing the cog icon in the top right corner and checking the ‘Enable Audio Scrubbing’ box.

Hide the character at the end of the live performance

In the Timeline editor, select ‘Add > Activation Track’ to create a Track. 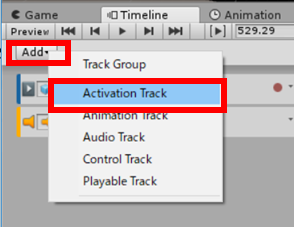 Drag and drop the character into the GameObject of the Track. Select the Clip and set the ‘Start’ of  ‘Clip Timing’ to 0. Set ‘End’ to the timing when you want to hide the character.

Assign the character to the GameObject of the Track.

Set up Particle and Shader

Arrange the imported particle on the Timeline so that it synchronizes to the song.

The following is a setting example of the particle effect just after the playback starts.

※I recommend grouping the particle performances that share the same starting and finishing timing by ‘Track Group’ to have better visibility.

In the Timeline editor, select ‘Add > Track Group’ to create a Track Group. 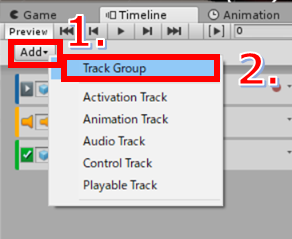 Rename it ‘CRS’ and press the ‘+’ button to create two Active Tracks. Then, drag and drop the Visualizer object and the Confetti object into them to assign. 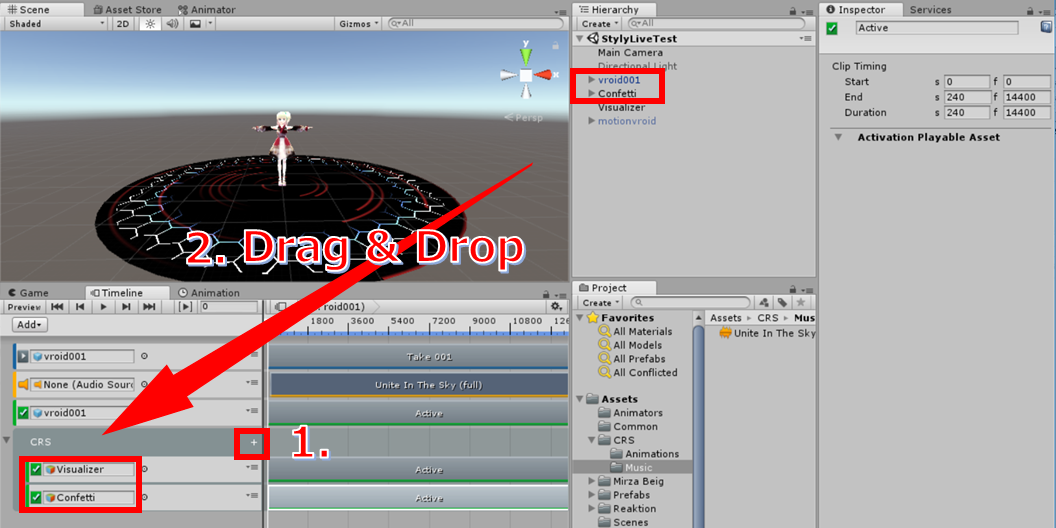 In the same way, add other particle effects.

The Timeline of the Scene uploaded to STYLY is shown below.

The Timeline of the Scene uploaded to STYLY

※Since it included a paid Asset, I excluded it from the sample project.

That’s all for today!

In the next 4th article, I will introduce the workflow from ‘Enhance the presence of the character’ to ‘Upload to STYLY’.