In this article, we’ll show you how to create a “flashlight that can be switched on/off” in PlayMaker.

Once you understand how to use the controller’s triggers to cause action, you can apply them to create a variety of gimmicks.

It is also recommended as an introduction to PlayMaker.

You can experience the sample space from STYLY GALLERY.
The Night Museum

You can download the Unity project described in the article here.
STYLY-Unity-Examples

First of all, download a sample project from Github and open it in Unity.

It is the folder called “Flashlight” in STYLY_Examples to use this time.

Create a flashlight and let the player have it

It is a flashlight that turns on when the trigger of the controller is pulled, and turns off when it is released.

You will use PlayMaker to build your logic.

The general flow of the logic is as follows;

(2) When the trigger is pulled, it transitions to the lighting state

(3) When the trigger is released, transition to the off state First, create a flashlight for the player to hold when it loads the scene.

Right click on the Hierarchy window. Select “Light” -> “Spotlight” to create a Spotlight and name it “Flashlight”. 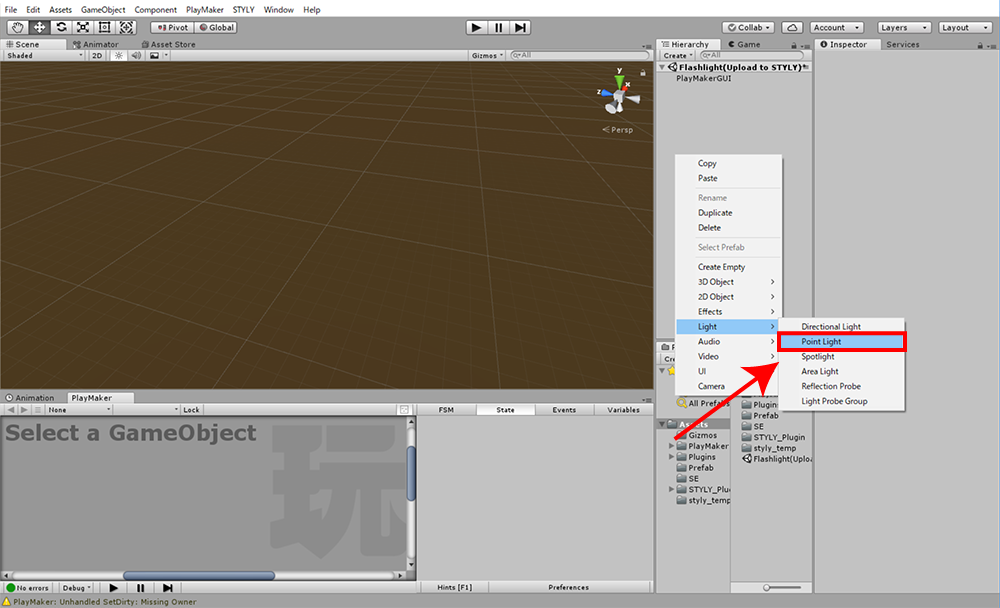 I change the property of Spotlight because it has a short irradiation distance and a narrow irradiation range to use it as a flashlight. 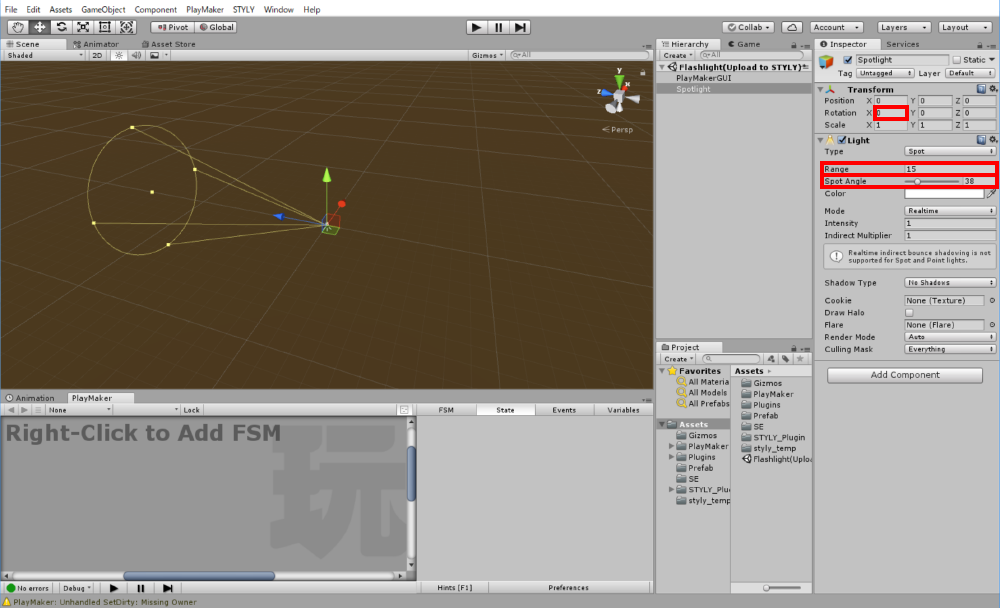 I want the shadow to fall when I shine it with a flashlight, so I change the “Shadow Type” to “Hard Shadow” and the “Render Mode” to “Important”.

(Due to STYLY’s specification, shadows will not be drawn correctly unless “Render Mode” is set to “Important”.

The creation of the flashlight is now complete.

Drag and drop the created “Flashlight” to the project window to make it prefabricated. 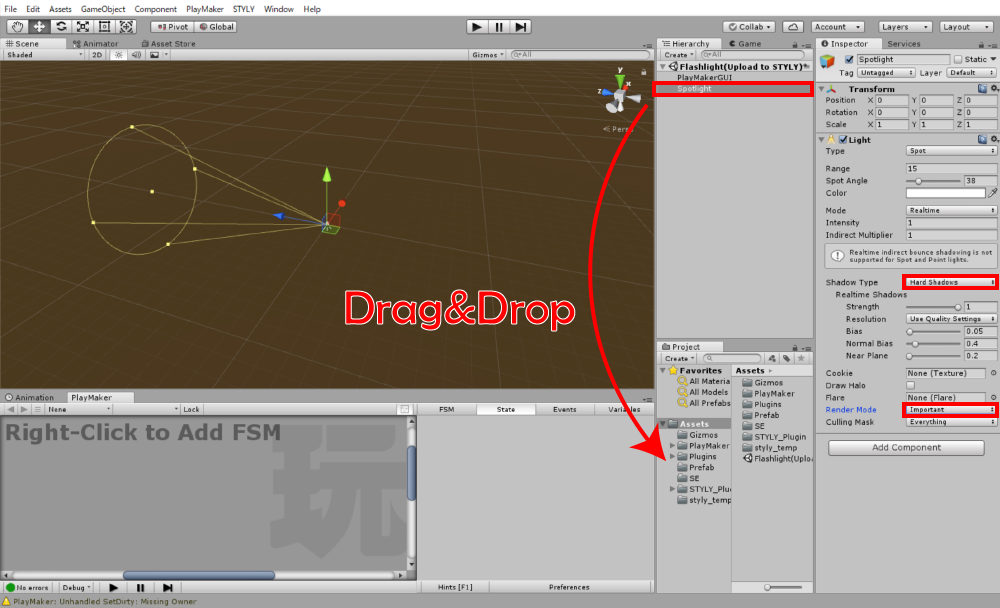 Letting the player hold the flashlight when the scene plays.

The next step is to create an empty object in the scene and build the logic.

The process flow of the logic is as follows;

(1) Use the [Find game object] to find the controller in the scene.

(2) Get the spatial coordinates of the controller by [Get Position].

(3) Click [Get Rotation] to get the angle of the controller.

(4) In [Create Object], the [Flashlight] created earlier will appear at the controller’s position in the scene.

Right click on the Hierarchy window. Select “Create Empty” to create an empty object and name it “Controller_Flashlight”.

This is where we will build the logic in PlayMaker. 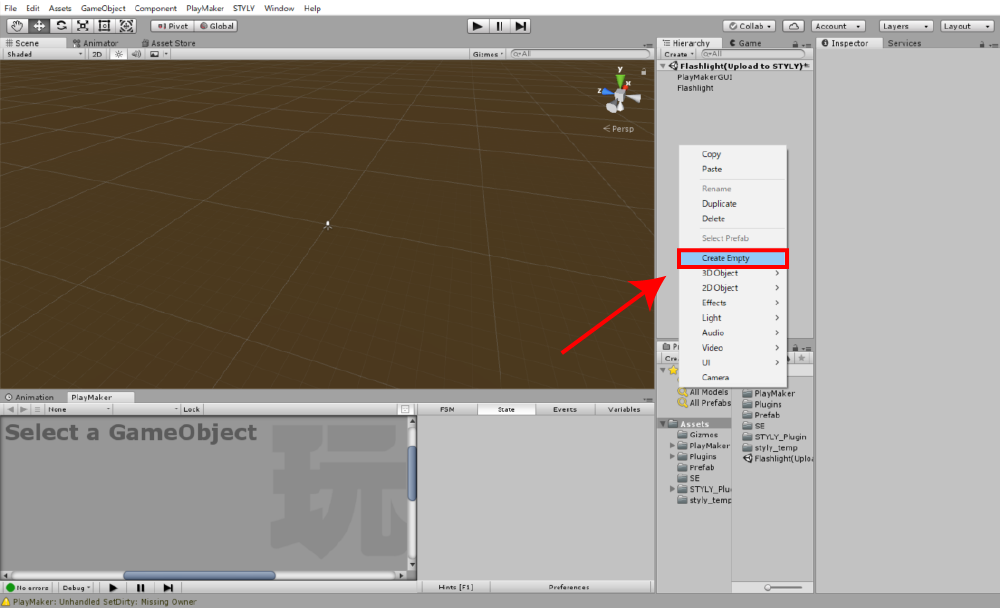 Open the PlayMaker Editor, right click on the window and select “Add FSM”. 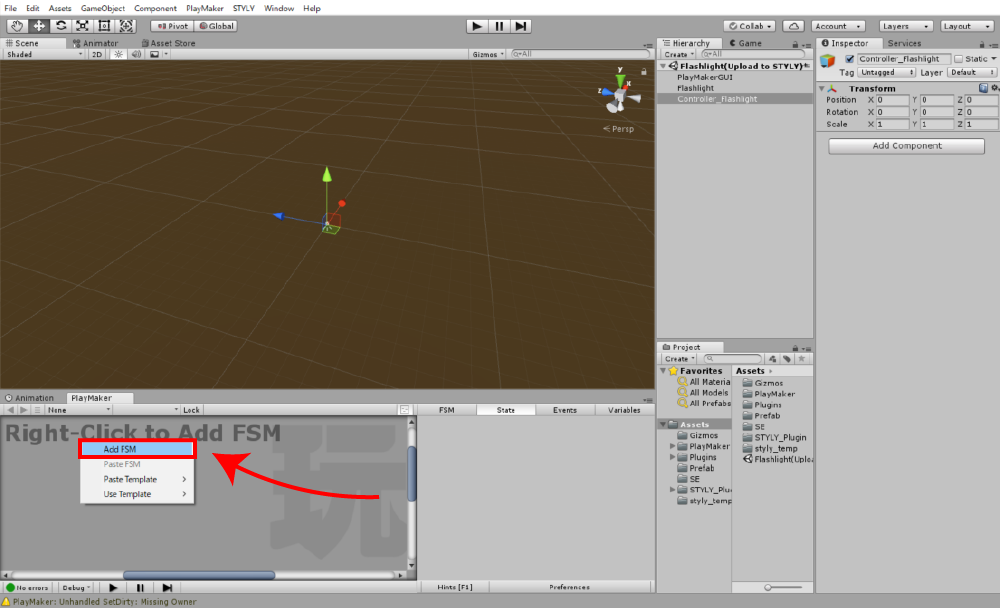 To add an action, use the Action Browser.

Once you open the Action Browser, use the search field to search for five actions: “Find game object”, “Get Position”, “Get Rotation”, “Create Object” and “Set Parent” and add the action to “SetUp”. 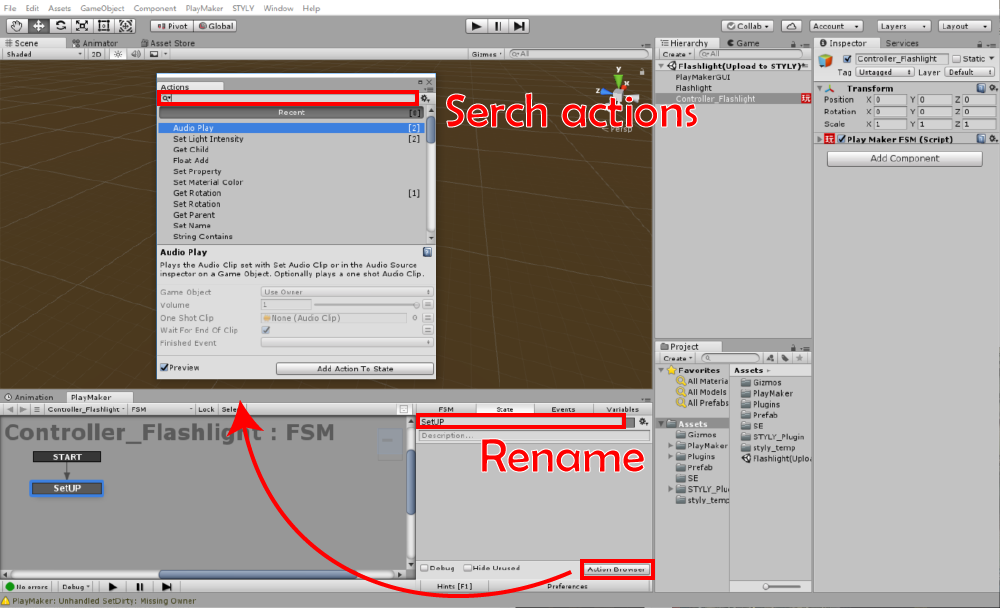 Once you have done adding actions, you can set up each action as follows

Next, click on Store and select “New variable…”, and name it “Controller”.

The right controller in the scene will now be searched and stored in a variable called “Controller”. When the box for specifying an object appears, press the two-line button on the right to toggle the variable to be specified.

Then, specify the “Controller” variable that we created earlier.

Click on the Vector and select “New variable…” and name it “Controller Position”.

Now the spatial coordinates of the controller in the scene will be stored in a variable called “Controller Position”. Setting the Get Position.

When the box for specifying an object appears, press the two-line button on the right to toggle the variable to be specified.

Then, specify the “Controller” variable that we created earlier.

Click on Euler Angles and select “New variable…” and name it “Controller Rotation”.

Now the spatial coordinates of the controller in the scene will be stored in a variable called “Controller Rotation”. 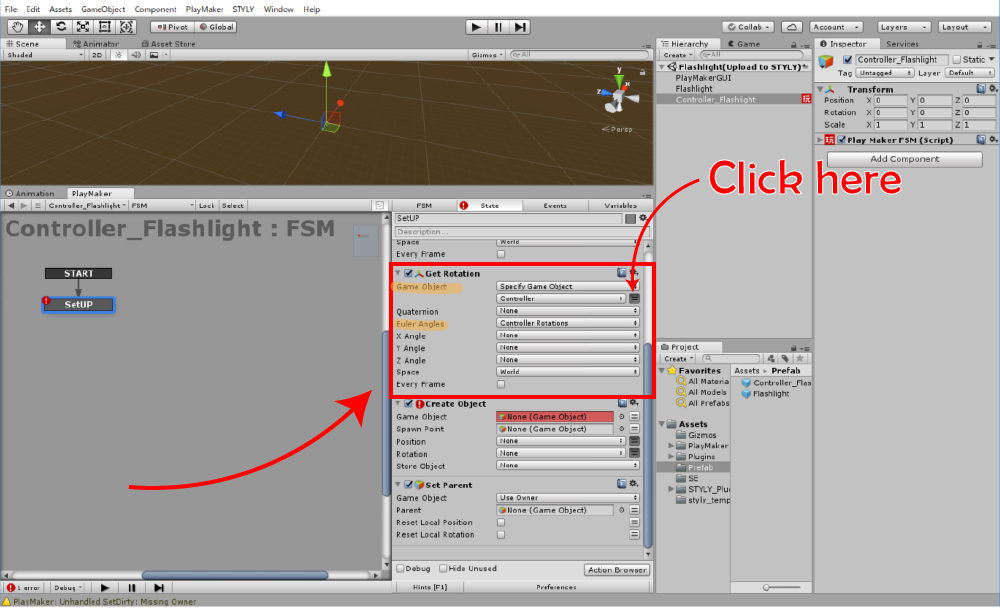 Set the Get Rotation.

In the “Game object”, we set a Pre-fab called “Flashlight” that we created earlier.

“Position” is the “Controller Position” variable that we created earlier.

“Rotation” is the “Controller Rotation” variable that we created earlier.

Click on “Store Object” and select “New variable…” and name it “Created Flashlight”.

Now the flashlight will appear at the controller’s position in the scene and will be stored in a variable called “Created Flashlight”. 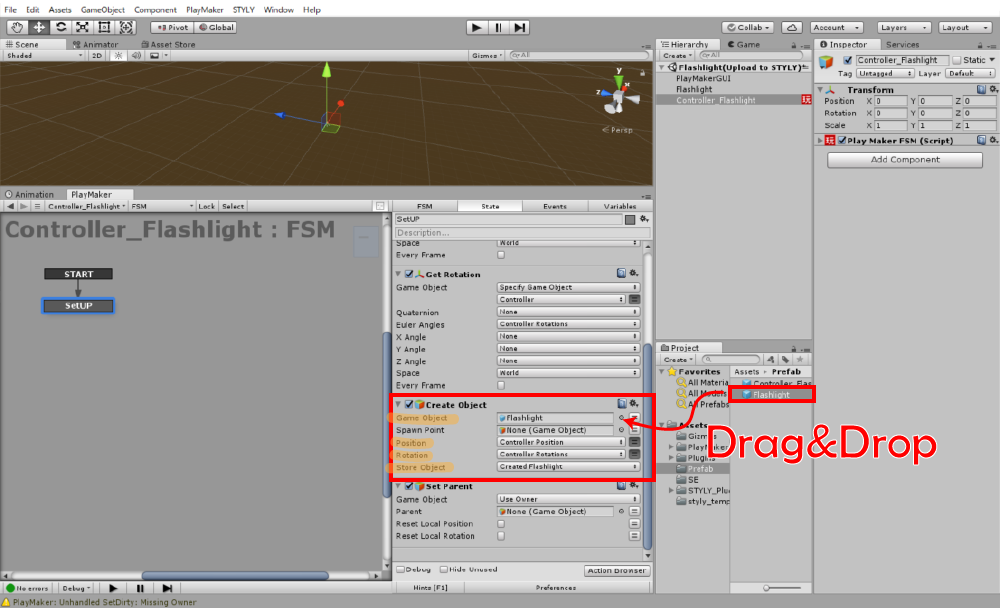 The purpose of this Action is to make the flashlight generated in the scene a child object of the controller and make it follow the controller.

Then press the double line button to toggle the variables and specify the “Created Flashlight” that we just created.

Press the two-line button on the right to switch to specify the variables, then select “Controller”. Detecting “pull” and “release” of triggers in global events.

When the controller’s trigger is pulled in the STYLY scene, the Global_TriggerPressDown_R event will be enabled.

And, when the trigger is “released”, the “Global_TriggerPressUp_R” event will be enabled.

Be careful, it won’t work properly if even one event name of them is wrong. After the “SetUp” action, created earlier, is executed, it is necessary to transition to the “OFF/Waiting Trigger R” state.

Right click on “SetUp” and select “Add Transition” and “FINISHED” to create an event called “FINISHED”.

If you drag and drop this, an arrow will come up and connect it to the “OFF/Waiting Trigger R”.

Now, after the “SetUp” action is executed, it will transition to the “OFF/Waiting Trigger R” state. Next, we will build the logic so that the trigger can be used to switch the lights on and off.

The process flow of the logic is as follows;

(1) When the [Global_TriggerPressDown_R] is enabled, it transitions to the lighting state.

When the “Global_TriggerPressUp_R” is enabled, it transitions to the off-light state.

In order to achieve this, we will create a transition as shown in the following image. Completed image of the transition.

Create a new State and name it “ON”.

If you drag and drop “Global_TriggerPressDown_R”, you will see an arrow and connect it to “ON”.

All the left ones are to add an action so that the light turns on and off according to each state.

Add the “Set Light Intensity” action to both the “OFF/Waiting Trigger R” and “ON” states.

The flashlight is now completed. First, attach “Audio Source” to the flashlight (Flashlight). This time, I prepared a SE called “Switch”.

Prepare a suitable sound file and attach it to the flashlight by dragging and dropping it.

Uncheck “Play On Awake” in the attached “Audio Source” and pull the Spatial Blend lever to the 3D side. When you’re done, press the “Apply” button next to the Pre-fab at the top of the Inspector to save the changes you’ve made to the Pre-fab. Save your changes to the Prefab.

Next, add an action to the State of “Controller_Flashlight”.

Add an “Audio Play” action to the “ON” state.

Select “Created Flashlight” for the “Game object” and attach “Switch” to the “One shot Clip”.

The sound effect comes to sound when the flashlight is turned on.

(To play the sound effect even when the light is “OFF”, add the “Audio Play” action to the “OFF/Waiting Trigger R”.) The only way to darken a scene is to remove the directional light, but it doesn’t enable to completely darken it. If you want to make it even darker, change the ambient light setting.

You can find out more information regarding this in the article below.

To use the gimmick in STYLY, upload the prefabricated “Controller_Flashlight” that you have created.

You can learn more about how to upload assets from Unity to STYLY in this article.

Once you’ve mastered how to make items using PlayMaker, you can now apply it to a variety of gimmicks.

Use this article as a reference to create your own original item.