I will explain how to add lyrics to a song by using Unity’s Timeline function.

This tutorial will be great for people who want to learn how to use Timeline and start creating a particle live show.

In the Timeline Editor window, you can control various elements in sequence, switching objects and playing music, animations, particle effects, etc. It is great for adjusting the timing of interaction between objects, so it’s an indispensable function for creating a particle live show and adding effects to a song.

First, open the Timeline Editor in Unity by selecting ‘Window > Timeline’ in the top menu. 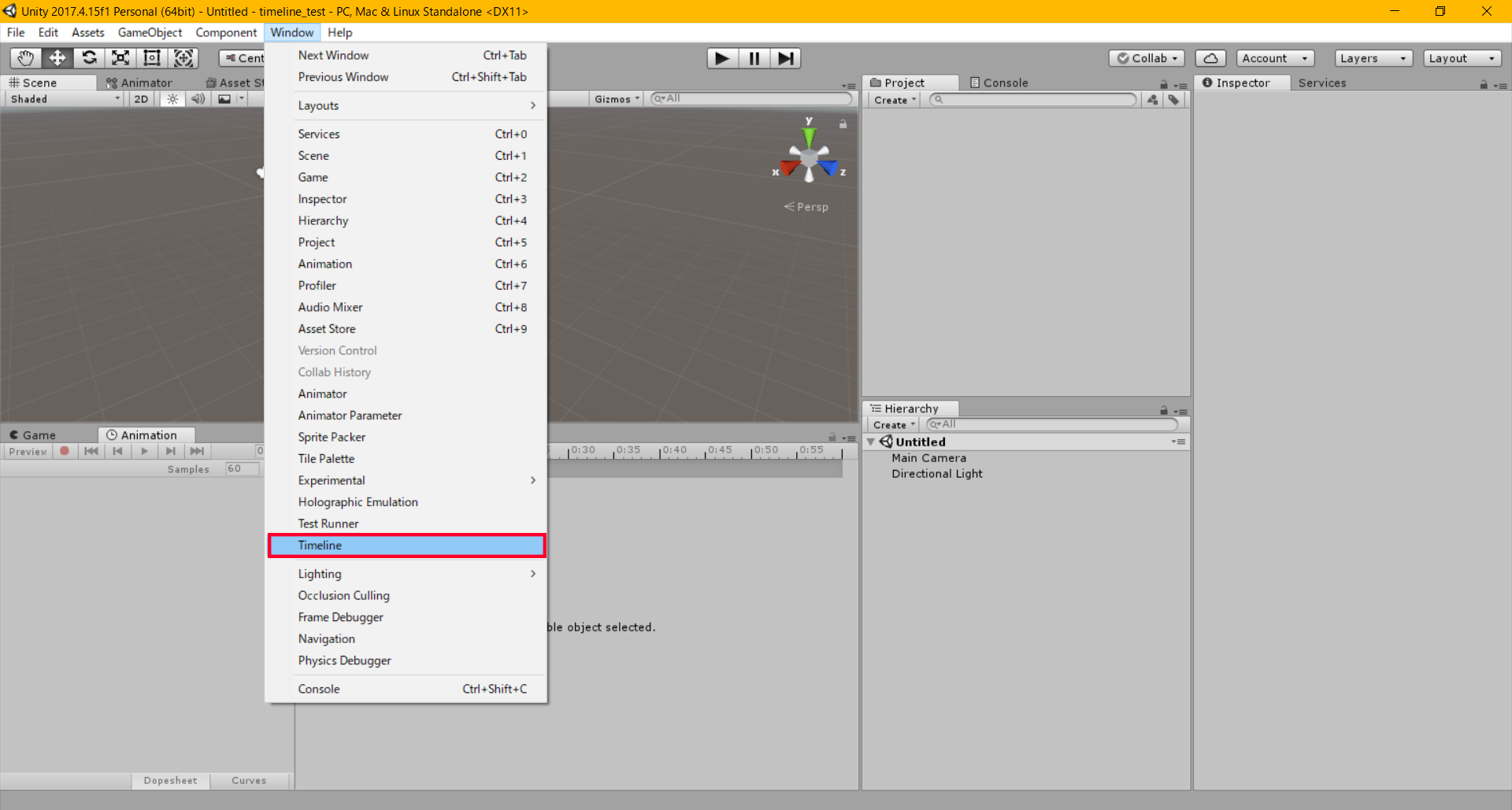 Next, in the Hierarchy window, create an empty object (‘Create > Create Empty’), which becomes the GameObject that stores the data of the Timeline. This time I named it ‘TLLyrics’.

With the object (‘TLLyrics’) created in the Hierarchy window, press ‘Create’ in the Timeline Editor to get it ready. It will create the Timeline asset (‘TLLyricsTimeline’) automatically and also attaches the ‘Playable Director’ and ‘Animator’ components to ‘TLLyrics’. 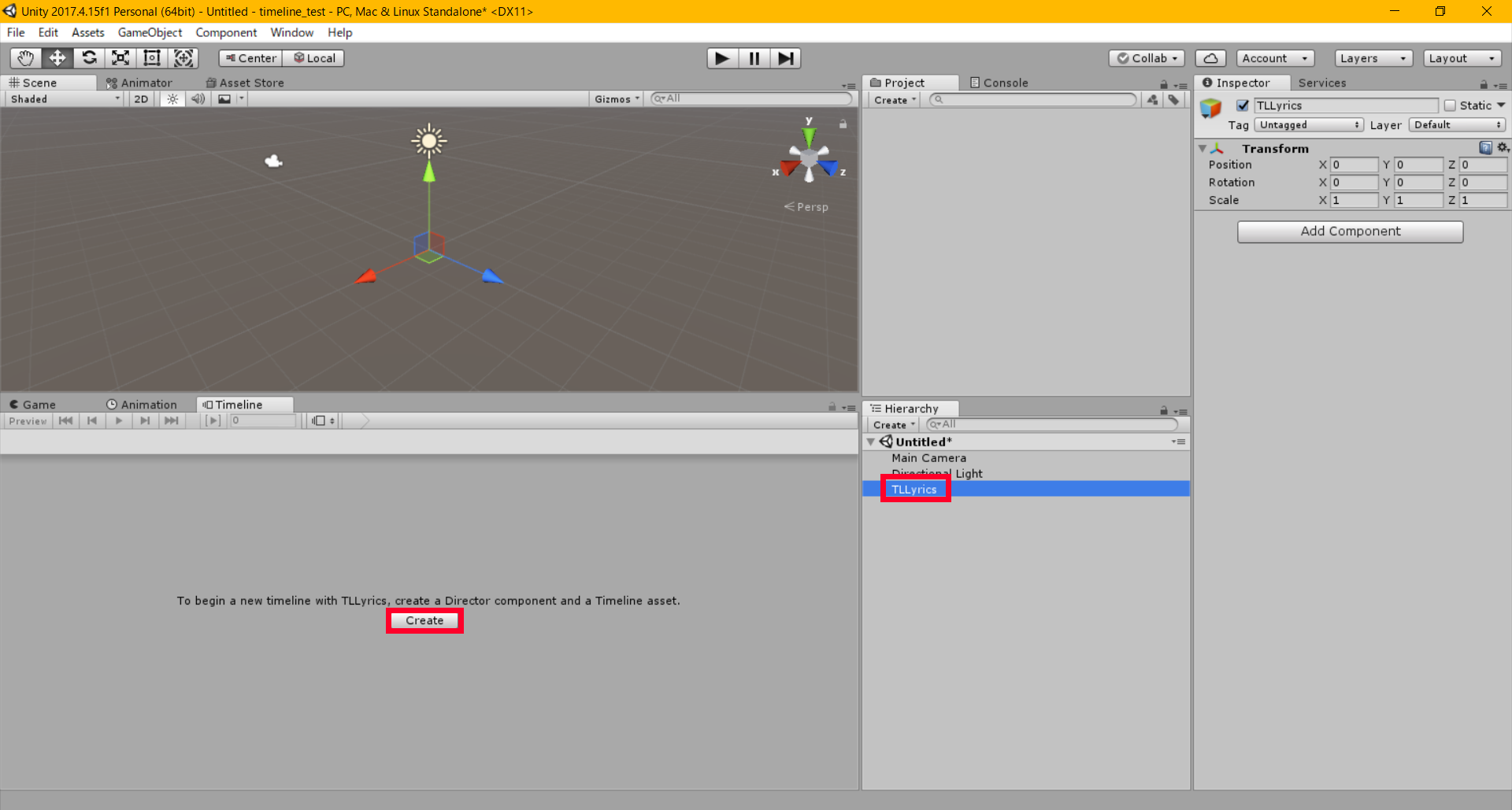 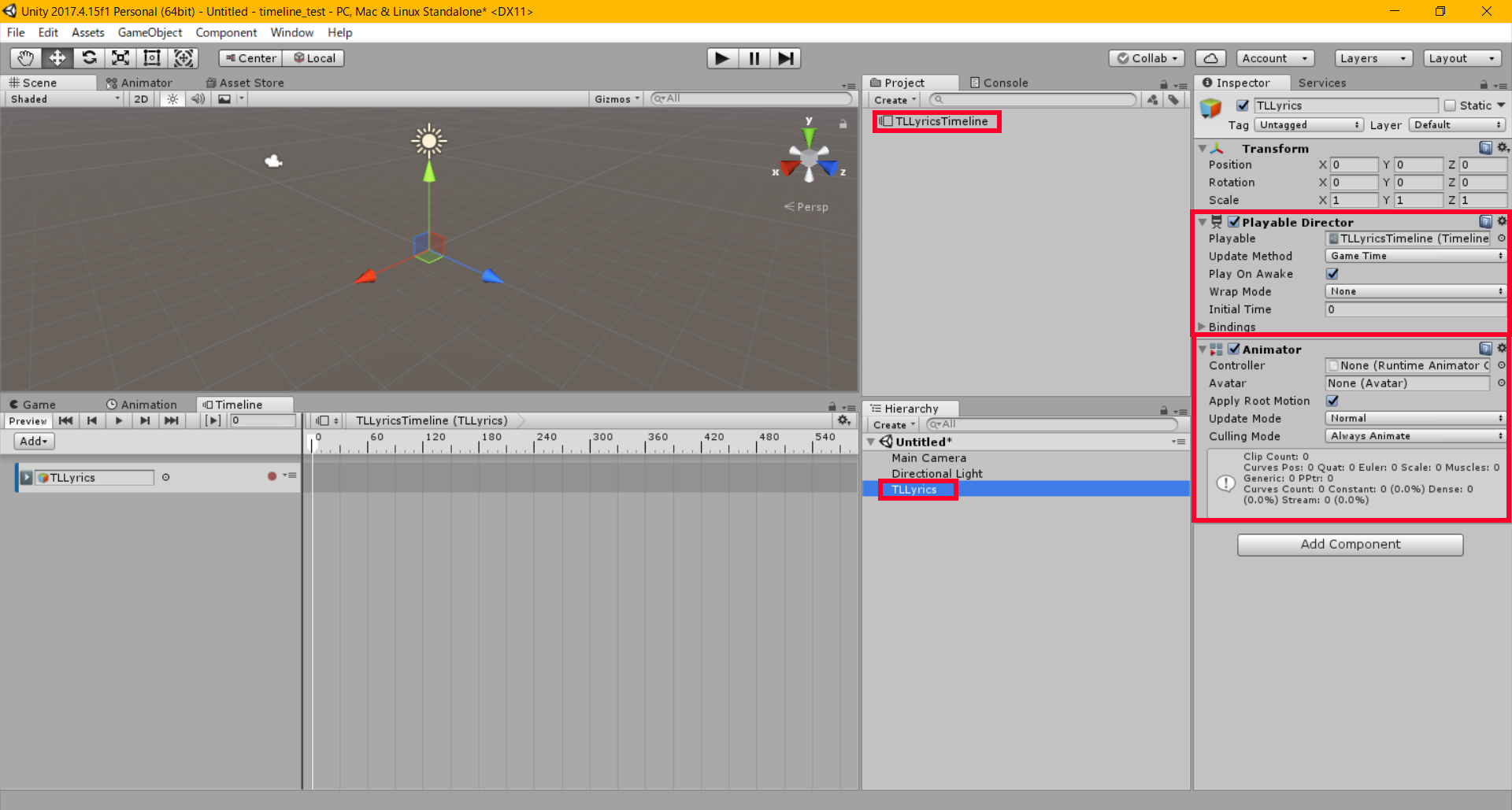 How to Activate and Deactivate an Object by Using Timeline 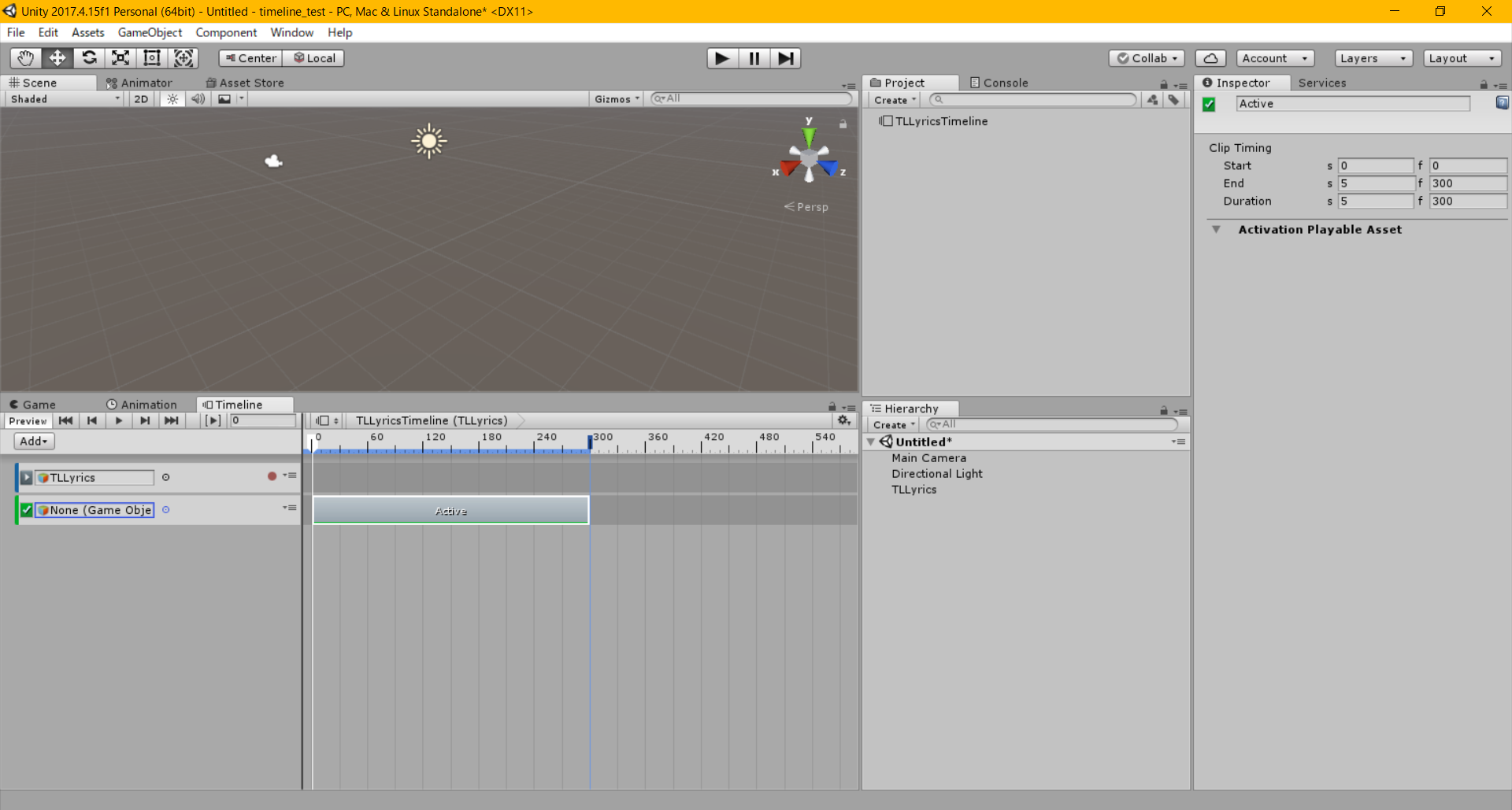 Let’s use a Cube as the object to appear. Create a Cube ( ‘Create > 3D Object > Cube’) in the Hierarchy and specify it in the Activation Track created earlier (Alternatively, you can do the same by dragging and dropping the GameObject to appear in the Timeline Editor). 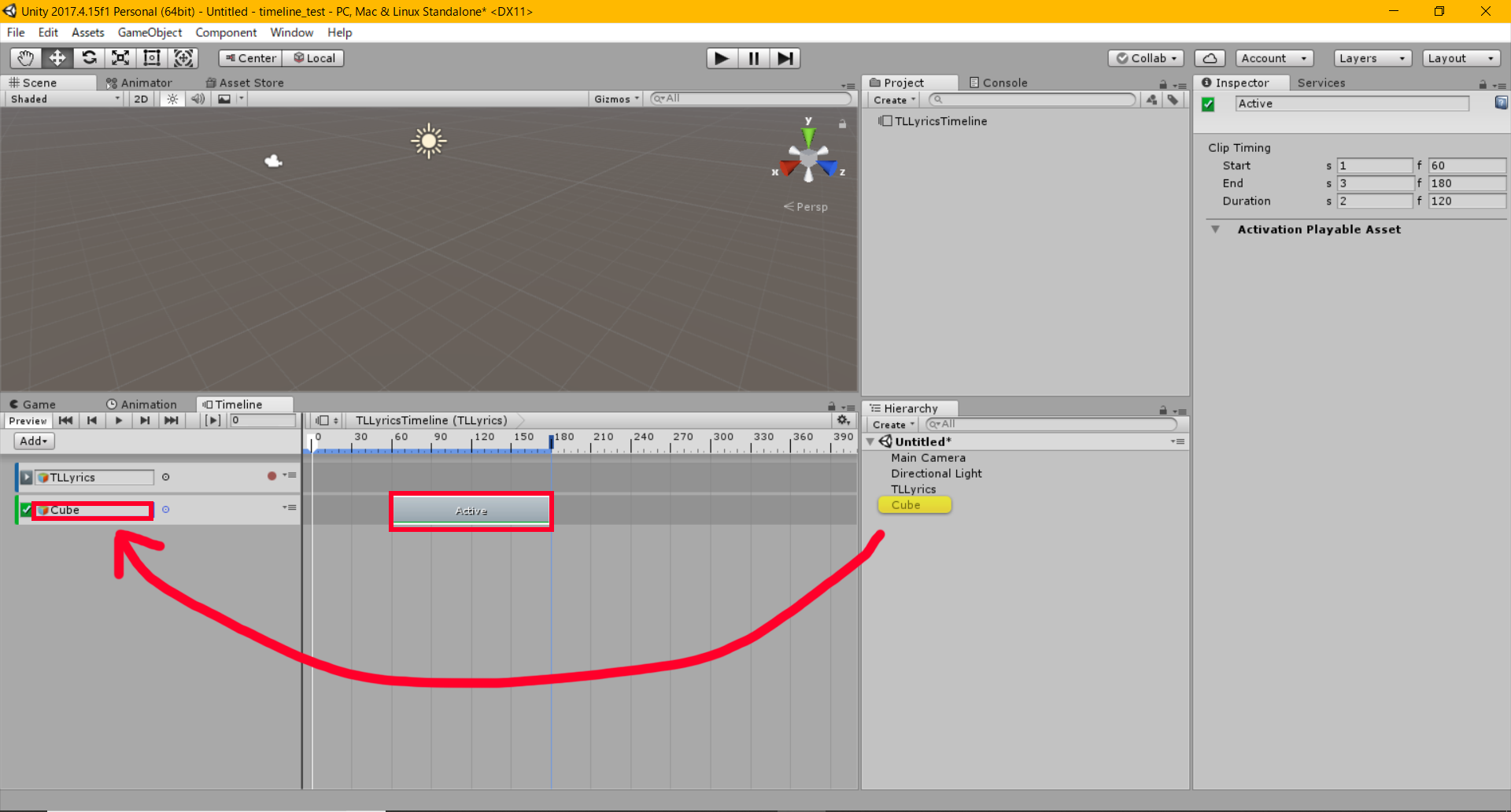 Play it to check if the Cube appears in one second.

As you can see here, it’s visually intuitive to control objects with the Timeline, so it is useful when you want to synchronize many objects and effects.

This time I use ’Ice Cream’ by 8gatsu2yuki as an example.

Here, I create the ‘Lyrics’ particles for the first part, ‘Namae Wo Yobaretara (when my name is called)’ and ‘Mieru Kokoro No Okusoko (It reveals the depth of my heart). Prepare the image for the lyrics with a transparent background. If you create the particles while following this tutorial, please use the following images (the lyrics are almost invisible on the screen…). ‘Ice Cream’ lyrics #1 – ‘Namae Wo Yobaretara (When my name is called)’ ※ It’s hard to read the white characters on the transparent background. ‘Ice Cream’ lyrics #2 – ‘Mieru Kokoro No Okusoko (It reveals the depth of my heart)’ ※ It’s hard to read the white characters on the transparent background.

If you want to prepare such an image by yourself, you can create it with free software such as GIMP.

When creating a ‘lyrics’ image with GIMP, set ‘Fill with’ to ‘Transparency’ to create a new image. 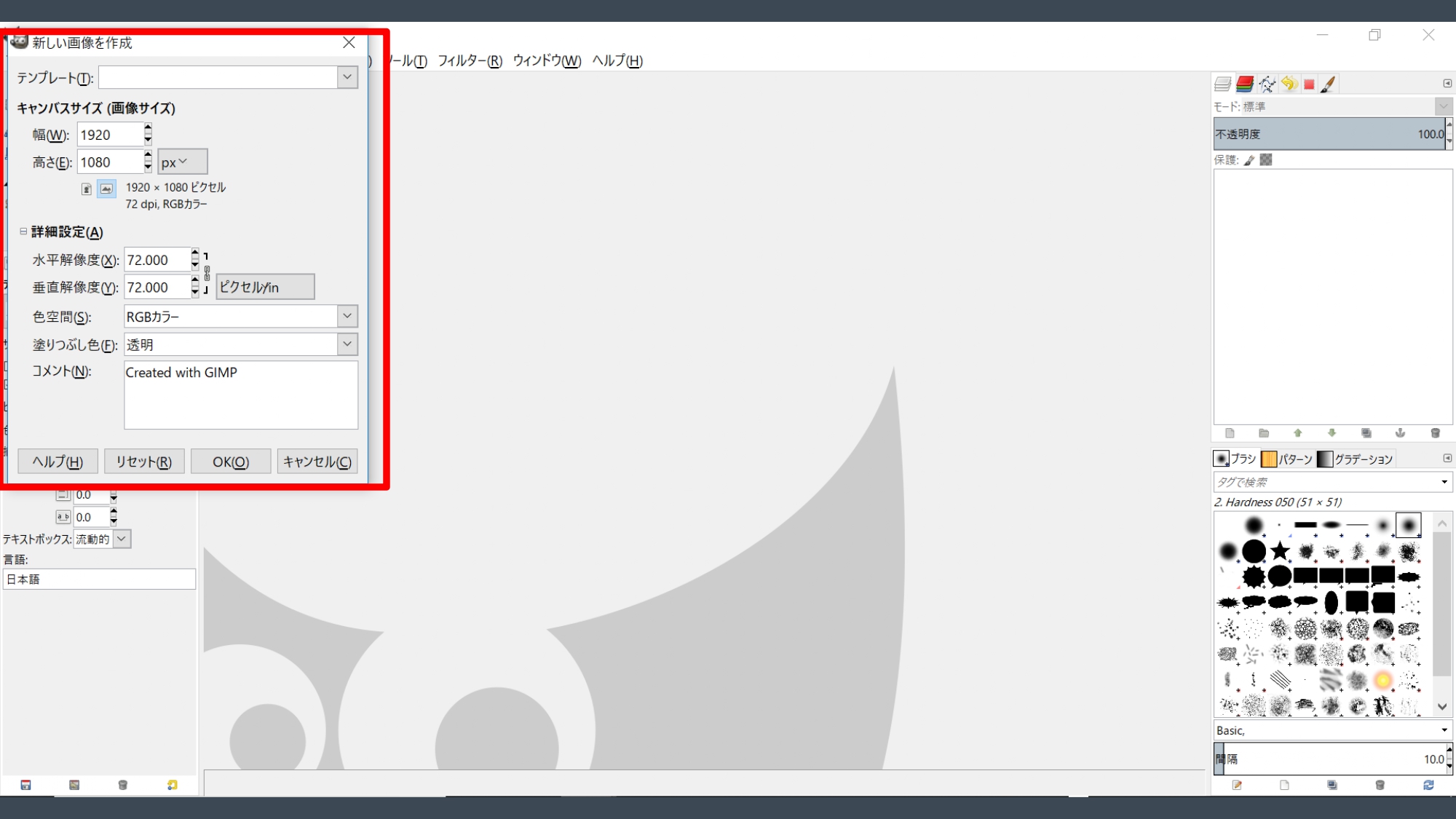 Create a new image with GIMP

Enter the lyrics in your favorite color. You can make them centered by pressing the ‘Justify/Centered’ button. I recommend justifying and centering the lyrics in Unity. 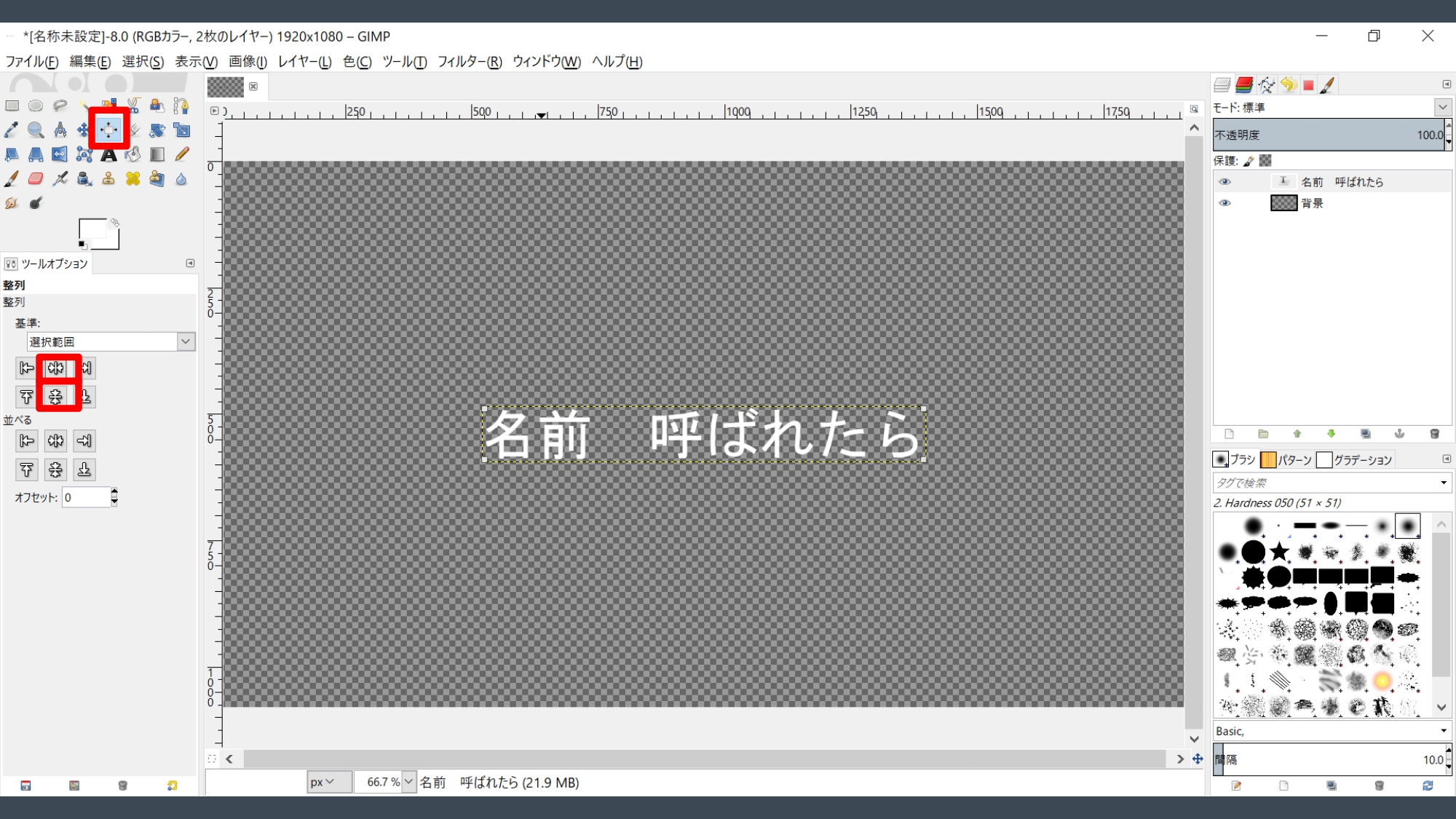 Once you exported it as a PNG image, it’s ready to use. GIMP – Export as a PNG image

Import the above image into the project in Unity. Next, we are going to create material for particles. I will make a new folder named ‘Lyrics’ and place all work under this.

In the Project window, create material (Create > Material) and set the shader to ‘Particles/Additive’. Set the ‘lyrics’ image prepared earlier in ‘Particle Texture’. Now you’ve got the material ready. 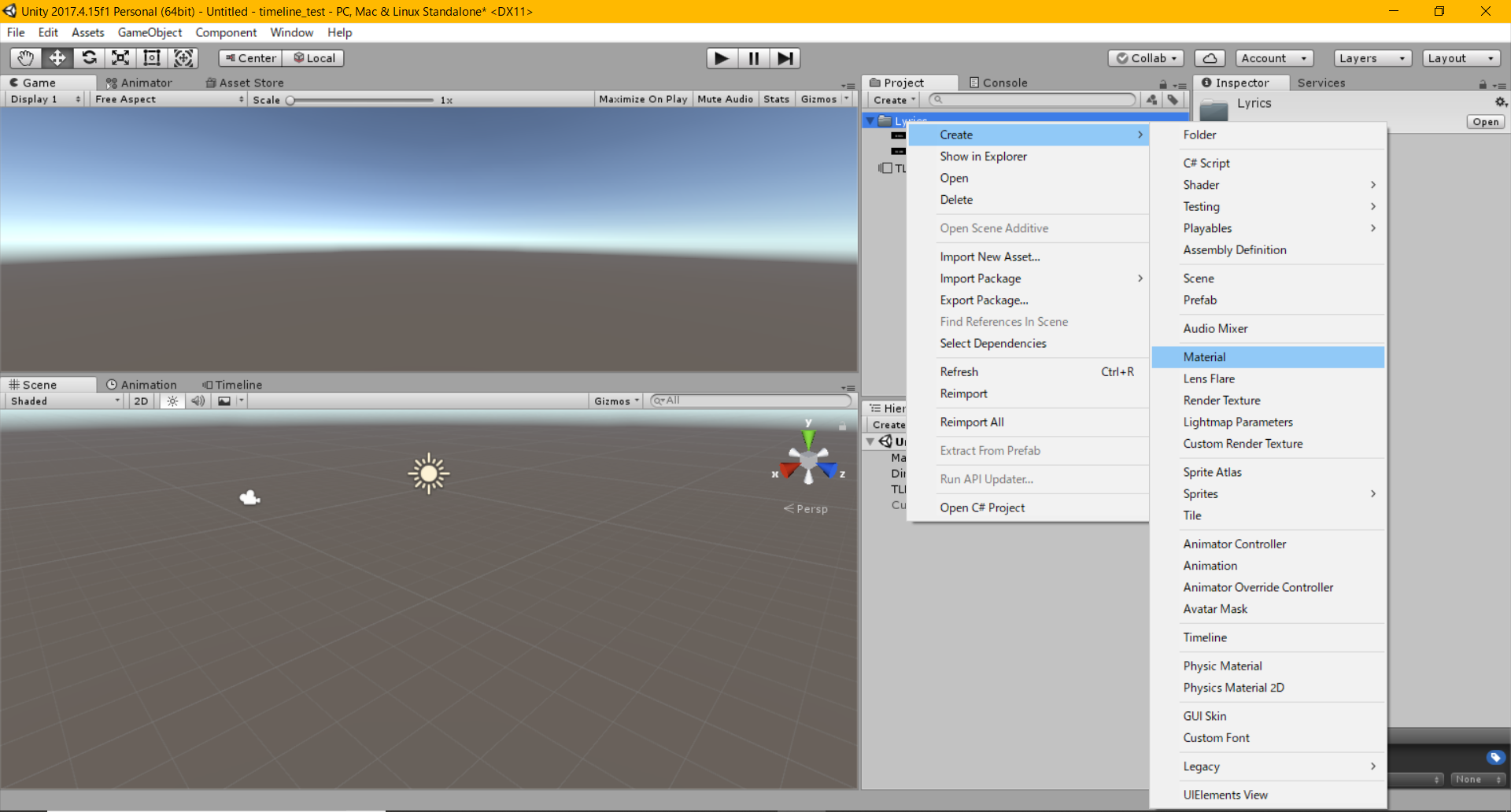 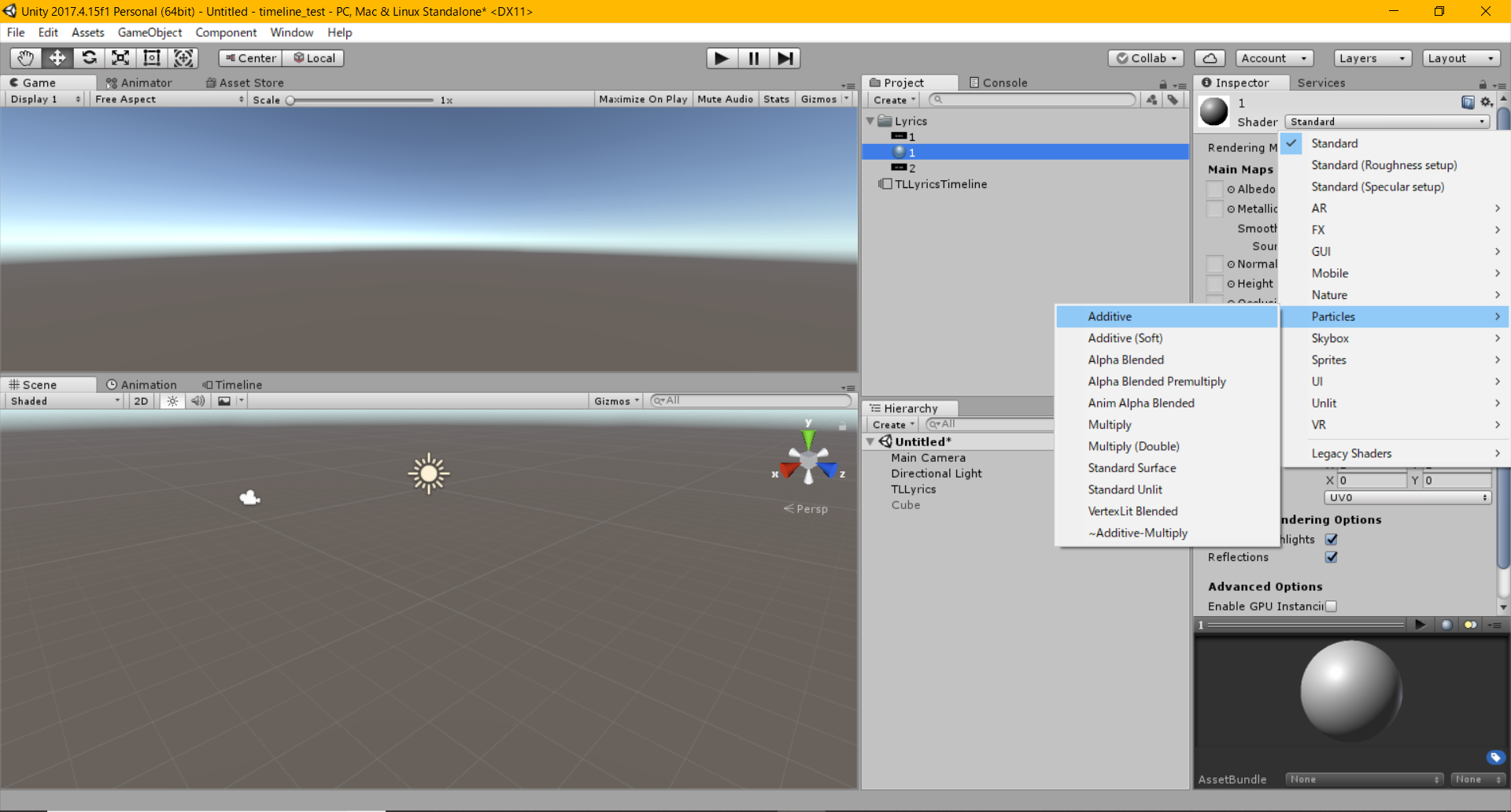 Set up the shader (Particle/Additive） Now, we are going to create ‘lyrics’ particles.

First, in the Hierarchy, prepare the following structure by using ‘CreateEmpty’. This time I will place each ‘lyrics’ particle under ‘Lyrics-root’ (Please delete the Cube created earlier during the ‘Timeline’ introduction). Place each ‘Lyrics’ under ‘Lyrics-root’.

Add the particle components to the GameObject (Lyrics-root/1) where you want to attach ‘lyrics’ particles and set the parameters for each component. Once you have added a component, set the parameters so that each ‘lyrics’ image gradually appears and disappears in order without changing its position. 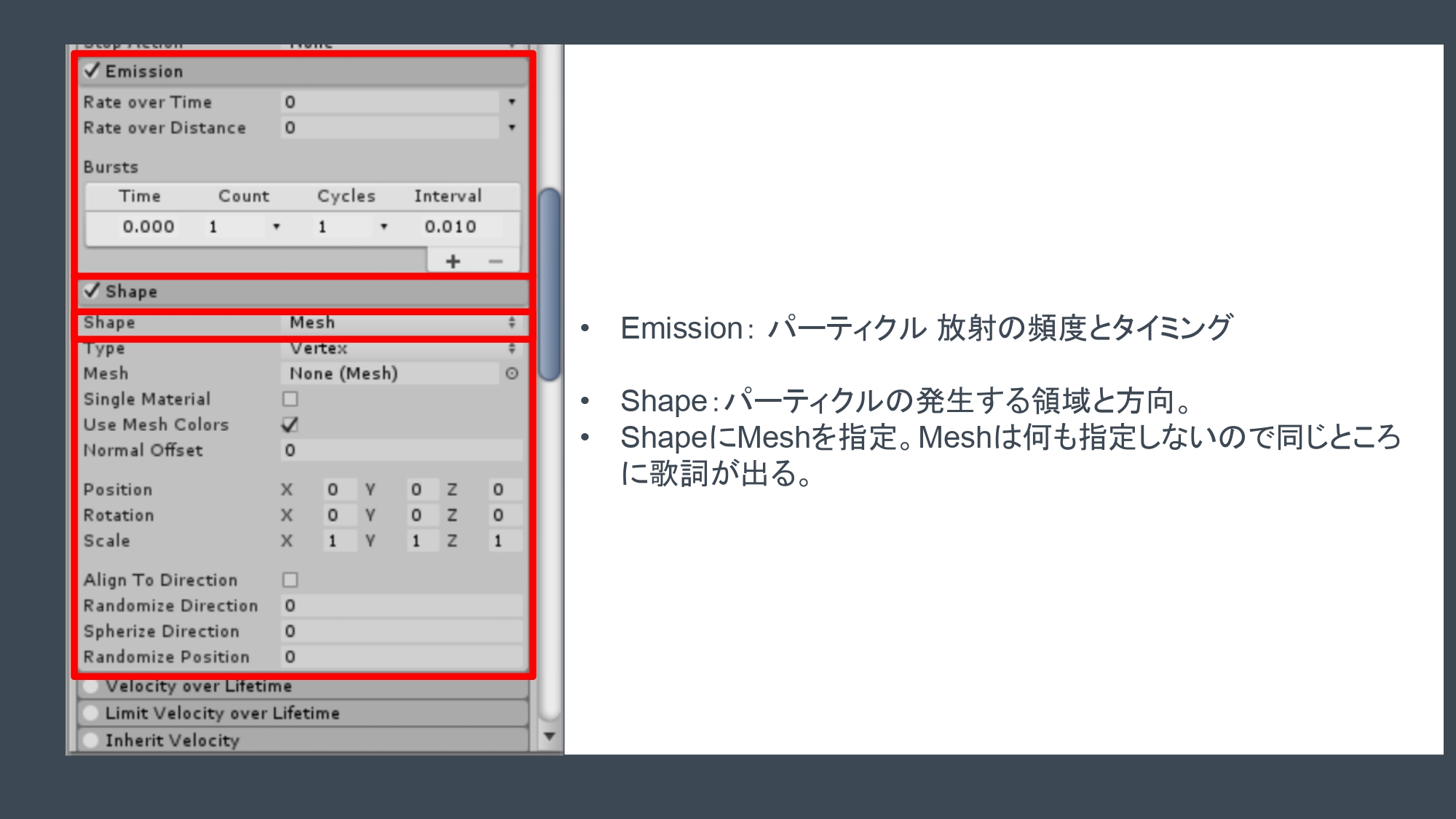 Set ‘Color’ so that the particle appears and disappears gradually (See the following screenshot). With these settings, the ‘lyrics’ particles will be played as shown in the below animation.

Check how the ‘lyrics’ particles behave.

You can use any lyrics particle with the same settings except for ‘Start Lifetime’ and ‘Material’. Set up the next lyrics, ‘Mieru Kokoro No Okusoko’ (Lyrics-root/2) in the exact same way and replace ‘Material’ with this corresponding one. You can duplicate (Ctrl+D) the created ‘Lyrics-root/1’ and rename it. Alternatively, you can duplicate the particle with the parameters set and paste it.

Show the Lyrics Particles with the Music

In the Timeline editor, make the created lyrics particles appear with the song.

Import the Song into Timeline

Select the ‘TLLyrics’ created when I explained Timeline and check it in the Timeline Editor (I have deleted the Activation Track for the Cube I used in the explanation).

Import the audio file (‘IceCream’) into the project and drag it into the Timeline Editor to add a new track (Audio Track). Add a song to Timeline

I changed the unit of time from ‘Frames’ to ‘Seconds’ to make it more intuitive. The setting for Timeline (Frames/Seconds)

Next, we are going to add ‘ActivationTrack’ for each lyrics particle. Use ‘TrackGroup’ here to manage many lyrics particles. In the Timeline Editor, add a TrackGroup by pressing ‘Add’ and select ‘Track Group’. Add two ActivationTracks to the TrackGroup and put the lyrics particles created under ‘Lyrics-root’ in the Timeline. Put the lyrics particles in the Timeline

Now, we are going to adjust the settings so that the lyrics appear to match the song.

Play the Scene and while listening to the music, time the lyrics particles so that they appear to match the song. I adjusted the main camera for better visibility. I set the Position of Transform to (0, 0, -0.5) and ‘Clear Frags’ of the camera component to ‘Solid Color’ (with the background set to black).

Now, we want to time the lyrics to match the song. Play the Scene and stop it at the beginning of the lyrics and then adjust the clip to the Timeline Playhead. You can also fine-tune it with the waveform. Next, adjust the clip so that it disappears when the song finishes. Adjust the clips of the lyrics particles.

Stop the Scene, select the clip and copy the value of ‘Duration’. Paste it into the ‘Start LifeTime’ of the corresponding lyrics particle to make the particle appear and disappear at the timing that corresponds to the length of the clip. Copy ‘Duration (Seconds)’ of the clip Set it as the ‘Start LifeTime’ of the corresponding particle

By applying these settings to both ‘lyrics’ particles ‘Namae Wo Yobareta’ and ‘Mieru Kokoro No Okusoko’ (1 and 2), they successfully appear and disappear at the specified timing which is now synchronized with the song.

This concludes the tutorial on the basics of lyrics-based particle live shows.

I also recommend the following article to create various expressions by using particles and shaders. Please try to make other expressions by yourself!

A large student who jumped into VR in the trigger to meet the TV anime "Prepara". Daily struggle to realize the world of "Prepara" to VR. We usually create VRCHAT's World Creation and Avatar Creation by Vroid, etc., and also write a sensual novel with VR theme. In the VR architectural contest, we won the master canna award in "Beautiful Building" by Shader.