There were a total of 31 artwork applications for the VR content award ‘STYLY Photogrammetry Awards 2019’.
Out of the 31, which were all full of originality, 14 were selected as finalists for the competition.

At the award ceremony planned on August 10th, 3 awards, the ‘Judge’s award’, ‘LookingGlass award’, and ‘STYLY award’ are going to be chosen from them. 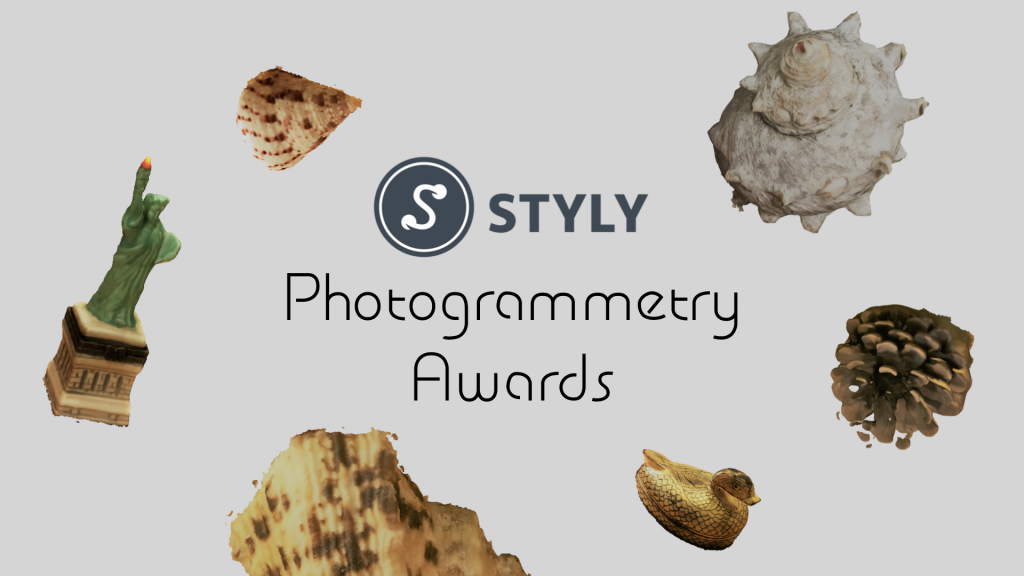 The ‘Graffiti’ drawn at the underpass of Toyoko line
It is drawn again, and disappears again.
Where the main gate of Yokohama senkyo company existed previously.

This is a middle report of the project called #ARCHIVETATEISHI to create a 3D archive of the townscape of Tateishi, Katsushika City, which begun last year by volunteers.

This is a space of apples that you cannot count.

The theme of this artwork is, ‘A grave in the VR era’.

When you visit a graveyard, you can notice that recently there are strange gravestones shaped as paper cranes, books, and etc.
The shapes are probably something that the person deceased loved.

A grave is a place to pray for the deceased, and where those who were left can sort their feelings.

Maybe there may be criticism that the space is imprudent.
But, I hope that the idea that a grave is where the left can sort their feelings reaches more people, and in the coming era, there may be more unique approaches to pray for the deceased.

”BLOCK HOUSE VR” is a pre event held in a world based on the ‘BLOCK HOUSE’ gallery in Omotesandou. The world will be updated frequently, and an exhibition matching that of the real world will be held in September.
This project inherits the commonground idea, and holding the event simultaneously in the real world and the virtual world creates a topographic world.
8 creators will create artworks with the theme, ‘The difference between virtual and real’, and the interactions between the viewers and the artworks will create new phenomenons.

This artwork did not capture the photos of a subject, but captured photos of the smartphones that are taking a photo and reproduced them using Photogrammetry. It is made by using the same models from 16 different angles, and placed the models in the same positions of where they were taken. The subject in the center has no texture, but by walking around the space and looking at the pictures in the smartphones, we can see what the original subject looks like, and imagine the surroundings.

By using the internet, we can share pictures online, and look at all over the world in real time. We do this without thinking about it deeply, but what we are doing is that we are making assumptions of what is there from 2D information.

Even if it doesn’t exist, the pictures shown in the smartphones is what matters, and what feels real.

I wanted to create such a monument.

I wanted to reproduce the childhood play we all did,【walking only on white lines of the road】in VR.

Through a observer’s view, road directions lose its original meaning, and resembles a maze. As the shape becomes more and more complicated, the maze becomes more attractive.

But road directions are meant for traffic, and we cannot play in the middle of a road where cars are running by.
But in a world recreated using photogrammetry, we can do anything we want freely. I recreated a certain junction with a lot of road directions in disarray, located in Satoshi Setagaya.

In addition, to let the idea ‘If you step out of the line, you are out’ have more reality, I set so that the road shader dissapears when you go near.

I hope that by returning to childhood and reexperiencing a city world, the viewers can refind the many elements of the everyday world, which grownups have a hard time finding.

I created photogrammetry models from a keyboard, a dumbbell, and a robot.
To create some sense of unity between these disconnected elements, I threw the lot into outer space.
Why is the dumbbell floating? Of course it is, it’s outer space. I wanted to create an extraordinary world, which we cannot experience in the real world.
For the scene, I used complementary colors and clashing colors to make the model stand out.
Another thing I had in mind was to use as many techniques I learned from articles in the STYLY Magazine. I used such tips froms the articles for the Shaders and Particles in the scene.

Aspects of real world landscapes and architectures change according to the season/weather/time and how the person captures it.
This artwork uses photogrammetry and photorealistic style transfer technology to reproduce the ‘Basilica di Santa maria della Salute’ from Venice, capturing the landscape in daylight, sunset, early evening as the city is lighted up by city lights, midnight when the city is illuminated by moonlight, and breaking dawn as the city wakes up.

This is your story, where you rediscover the city you live in.

Japanese folk toys have a lovely innocent look, and are attractive in a unique way.
They are also created with the technique of superior craftsperson.
I want more and more people to discover the charm of Japanese folk toys.
And, I want to spread the attraction of Japanse culture globally. These two were my main motivations to create this work.

I collected data from the Former Yabashihara House【Important cultural property】(from the 1750’s) and used modelling skills to recreate a room. I used the texture from real photos, and the music I am using recorded live from a Kyoto Koto performance.

Japan has a custom called ‘Ninety nine gods’.
Since folk toys are popular as amulets and lucky charms, I thought of them as gods, and named the world ‘九十九 -TSUKUMO-’.

I made this content so that viewers can experience the charms of Japanese craftsmanship, unique customs, and Japanese culture.

◆Content
●The experiencer will search for folk toys in a Japanese-style room.
●The folk toys will appear as the viewer approaches them, and the viewer will become able to read the explanations for them.

People from all around the world, young and old, come to pray for peace to the ‘Hiroshima Peace Memorial’, a world heritage.
’Technicism’ is not only the title of this work, but also it’s theme.
Photogrammetry, the technology used to create this work creates real looking 3DCG from photos,
but computer generated scenes look somewhat dangerous and destructive.
In this work, viewers can travel between the computer generated scene and the original real scene.
Humankind has solved many problems through the development of technology, but it also resulted in many tragedies.
Hiroshima Peace Memorial was built to pray for peace, and to precept another tragedy from happening.
I thought that I could express the negative side of the world heritage by recreating the site using photogrammetry.
Although our world and society still have many problems, I believe that one day we will be able to solve them all.

The announcements of the award receiving works will be at the Photogrammetry Meetup on August 10th (Sat).

The announcements of the award receiving works will be at the Photogrammetry Meetup on August 10th (Sat).
The details of the event are here.