This article explains in detail about “Color Grading” in “Post Processing“, an asset for implementing post-effects in Unity.
By using this effect, you can freely change the color of the entire scene, allowing for richer spatial expression.

It is intuitive and can greatly improve the quality of the scene, so let’s take this opportunity to try Color Grading while referring to the sample scene!

You can experience the sample scene from the STYLY GALLERY.

You can download the Unity project described in this article from here.
Color Grading Sample Scene

What is Color Grading?

Color Grading is an effect in Post Processing, an asset for implementing post-effects that modifies or alters the color and brightness of the final image generated by Unity.
With this, you can freely change the saturation and brightness of the space, just like in Instagram or Photoshop.
I used Bloom in Post Processing to create a glowing object, and then used Color Grading to change the overall color to blue.
By doing this, I was able to create a much more unified image than without any correction, and the quality of my work went up a notch.

For more information on Post Processing, please refer to this article.

Click here to see the assets used in this article.

*Note: About the assets available on STYLY

Let’s try to use Color Grading

Select Add effect… and select “Color Grading” from the list.

How to use Color Grading

First, let’s take a look at the basic usage of Color Grading.

There are three basic modes of Color Grading.

The sample scene was created using High Definition Range (HDR), but there were no problems with the scale of the sample scene.
It is a good idea to use different Modes depending on the size of the scene you are creating.

Tonemapping is a function that re-maps the brightness according to the display we are using, and this function can be used to create a sense of atmosphere for the entire space.
Tonemapping is especially effective for HDR, which has a wide range of brightness.

There are four modes of Tonemapping.
I’ll explain them one by one, comparing them to the image without the effect.

There are four modes of Tonemapping.

Compare the image with the one without the effect and see for yourself.

Channel Mixer is a mode for setting how much the color selected in the tabs at the top affects the input RGB, which is divided into RGB (red, green, and blue).
However, since this function is quite difficult and the same color can be achieved with the modes introduced so far, I will not discuss it here.

The trackball in the middle of the hue ring is used to adjust the Lift (dark areas), Gamma (middle areas), and Gain (light areas).
The closer the middle trackball is to the hue ring, the stronger the influence of that color becomes.

To make it easier to understand, I’ll highlight each color.

When only Lift (dark area) is close to red

Click and hold the trackball of Lift and move it closer to red.

Then the dark area turns red.

Lift has a strong effect on dark areas.

Next, when only Gamma (the middle part) is close to green 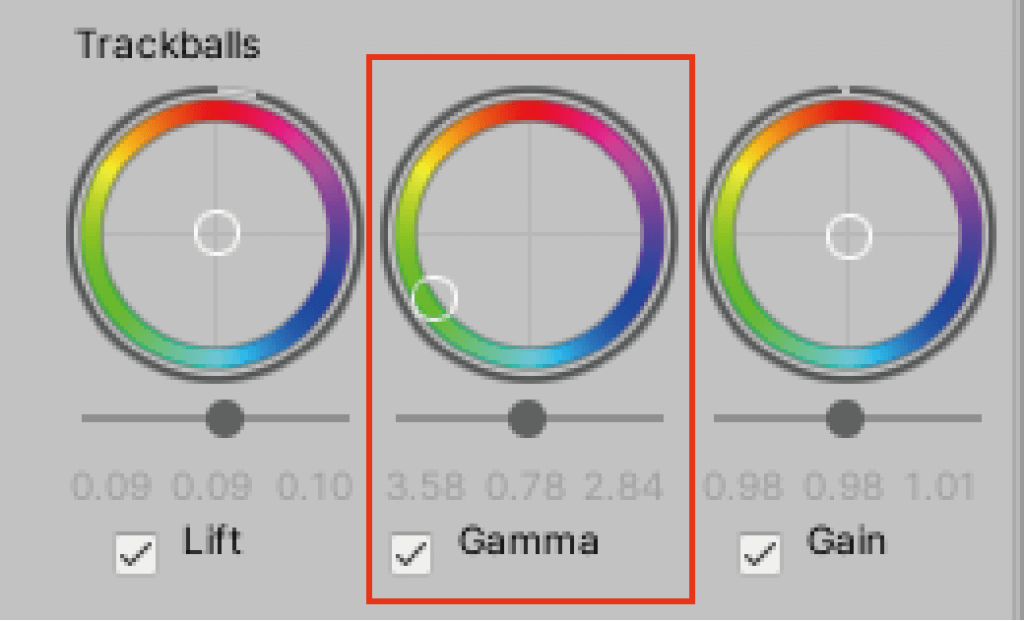 Then the middle part of the image turned green.

Gamma has a strong effect on the middle part of the image.

Finally, when only the Gain (bright area) is close to blue 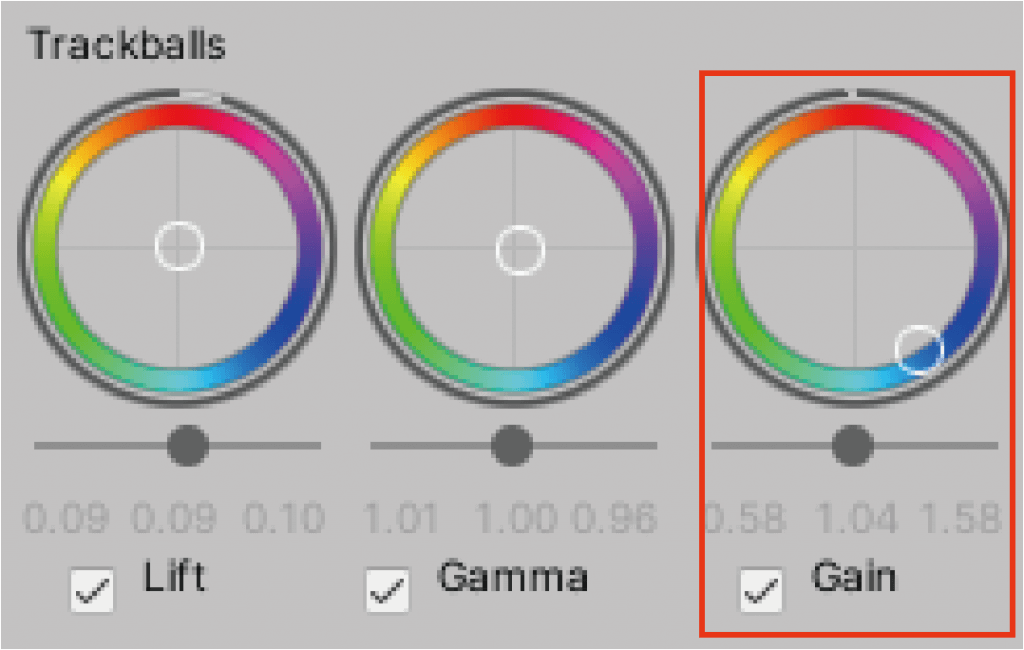 Click and hold the Gain trackball while moving it closer to blue.

Then the bright area is tinted blue.

Gain has a strong color effect on bright areas.

This is a mode that allows you to adjust the brightness and saturation of the hue using a tone curve in Photoshop.
This mode is also relatively difficult, and can be substituted with the modes introduced earlier, so we will skip it.

This is how to use Color Grading.
Color is one of the most important elements in a work of art.
Just by choosing one of these modes to change the color and atmosphere of a space, you can improve the quality of the space you have created and make your work even better.

Finally, let’s take a look at how to direct the effects of the sample scene.

For the sample scene, I used an effect called Bloom from Post Processing.
Bloom works especially well with Color Grading, and I was very impressed with the compatibility of the two effects.

Direction of the sample scene

In this sample scene, an object is made to glow and the amount of light and diffusion is adjusted using the Bloom effect.
First, let’s make the object glow.

First, prepare a suitable object in Unity (Directional Light has been removed to make it easier to see the light emitted).

Drag and drop the created material onto the object.

Drag and drop the created material onto the object.

Then, open the object inspector, select Emission in the Material Settings section below, and click HDR below. 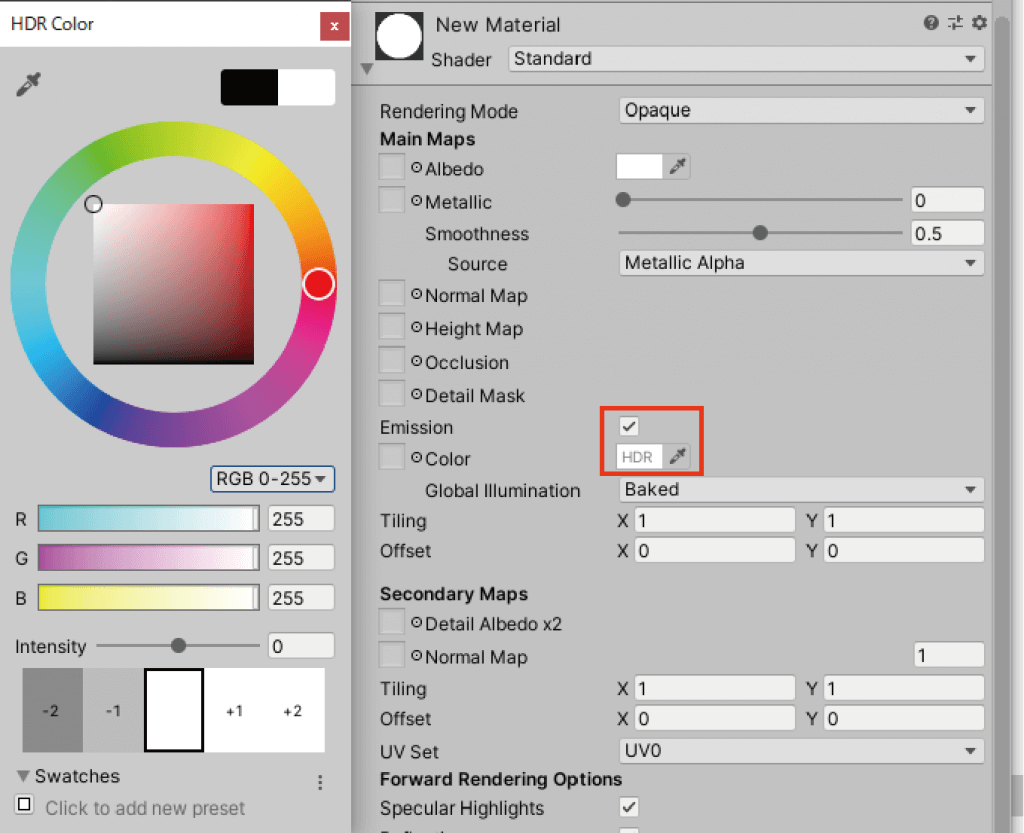 Select the color you want in the color picker, and the process of making it emit light is complete.

We will now implement the Bloom effect.
As with Color Grading, select Add effect… in the Post-Process Volume of the Gameobject and select Bloom from the list. Select Add effect… and select Bloom from the list.

Place the glowing object, and change the Intensity value of Bloom to change the amount of light emitted by the object.

Changing the Intensity value of the Bloom changes the amount of light emitted by the object.

After that, use Color Grading to correct the color tone and you are done.

In this article, I’ve covered how to use the Color Grading effect in Post Processing, as well as the detailed roles of the modes.
This is a great opportunity to take your work to the next level.