If you have used Unity, you may have heard that you can use GitHub in Unity, but you may not know how to use it.

In this article, I’ll briefly introduce the GitHub function and show you how you can implement GitHub when developing with your team using Unity.

I think this is an area where you can improve your production efficiency by getting used to Unity early on.
The more you get used to using GitHub, the more effective it will be, so please start working on it as soon as possible!

*This article is a continuation of the previous article. Please see Part 1 first.

Advantages of Integrating GitHub and Unity

The advantages of integrating GitHub and Unity are as follows

However, “GitHub for Unity”, which is provided by GitHub, does not have the function to share the editing status with multiple people (as of August 2021).
This article also shows you how to use a service called SourceTree, which supports collaborative development in Unity, to allow multiple people to use the same project.

This article is intended for people who

This article does not cover how to introduce GitHub to Unity for team development or how to upload a collaborative project to the web via GitHub.

I’ll start with two things: 1. to be able to manage the production status of each version, and 2. to be able to work with multiple people on a project.

Also, since the goal is to be able to do team development (2), GitHub for Unity, which only includes version control functions, will not be covered in this article.

So, let’s start with the explanation.

In the previous article, we worked up to the point where we were able to link GitHub and SourceTree.
In Step 6 and later, I’ll explain how to visualize the co-editors and production status, and how to revert the version.

SourceTree does not allow you to create a project in Unity and then register the project’s files to GitHub.
Therefore, we need to insert the files manually.

In this example, I named the project “unity git renkei” for the sake of clarity. You can open the file where the project is saved by clicking the “Reveal in Finder” button on the right side of the project list.
*”renkei” means “integration” in Japanese.
(Unity saves all edits made in Unity as a file. The file is saved in this folder.) 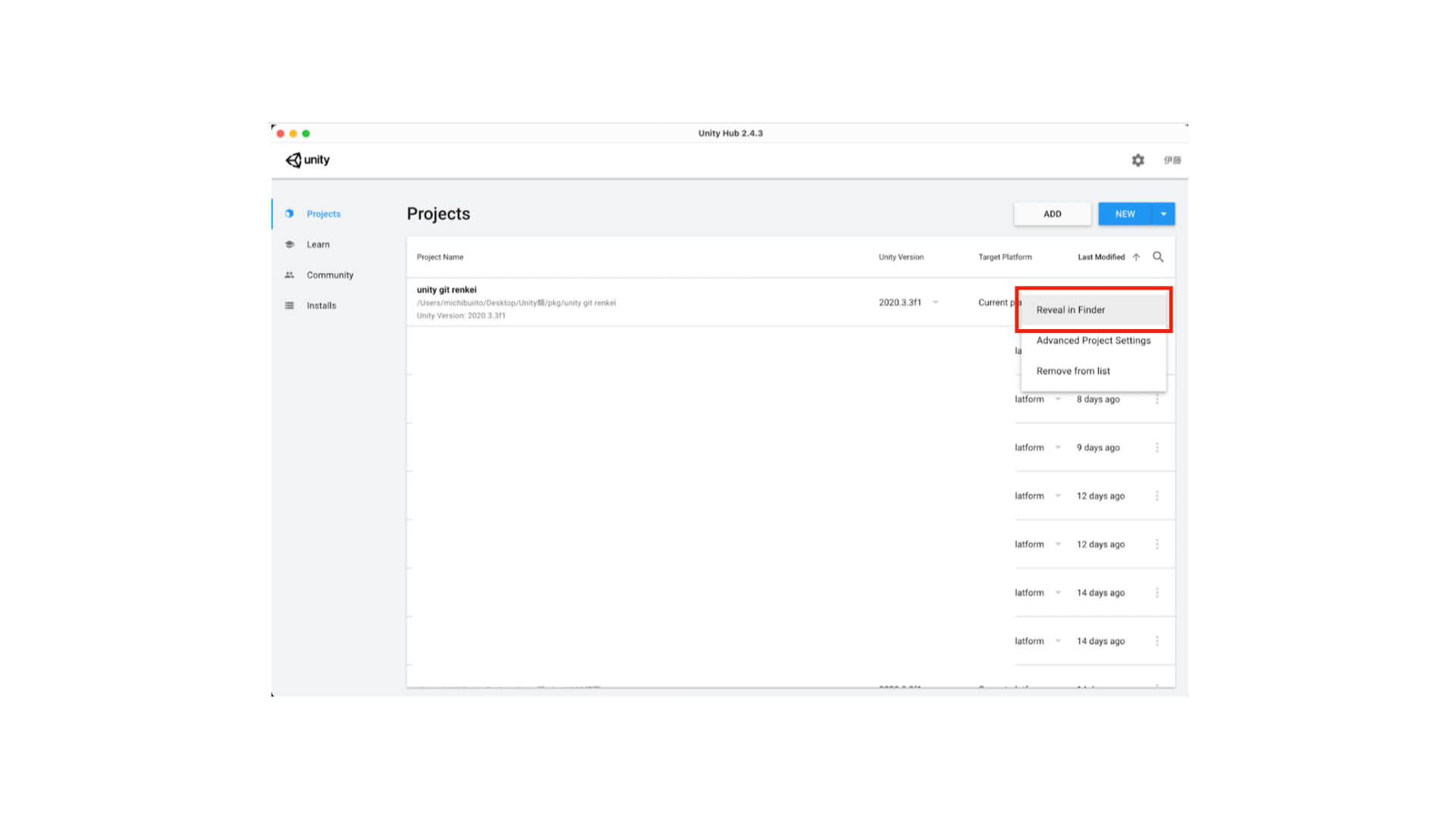 Open the file where the project is saved from UnityHub

From within the source tree, you can also view the location of the folder by selecting “Show in Finder” from the File Status column in the upper left workspace. 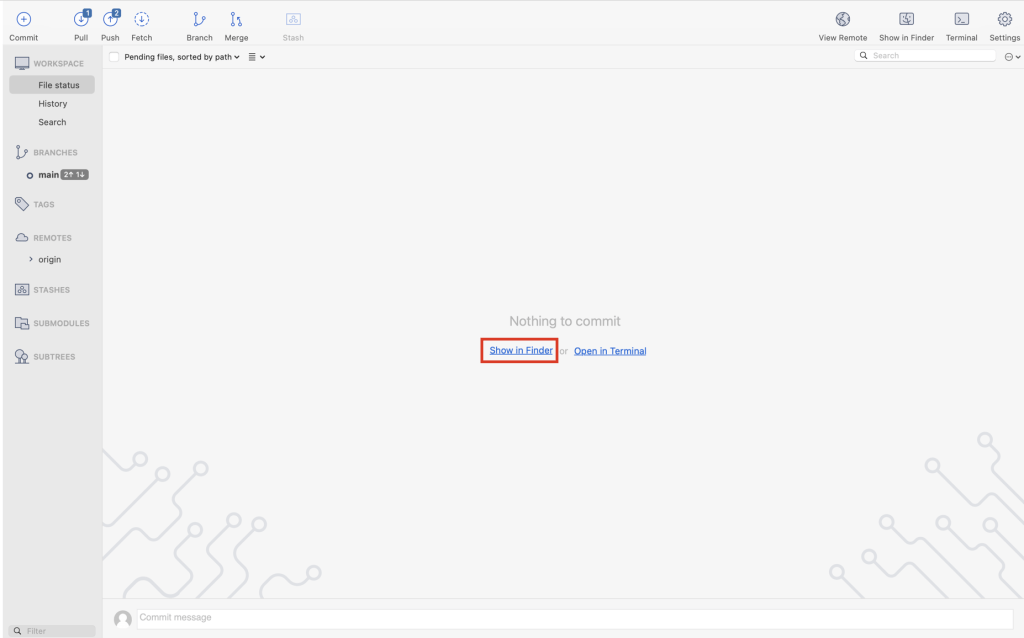 Select Show in Finder for the source tree as well

Save the Unity project folder to the folder where you want to save the SourceTree. 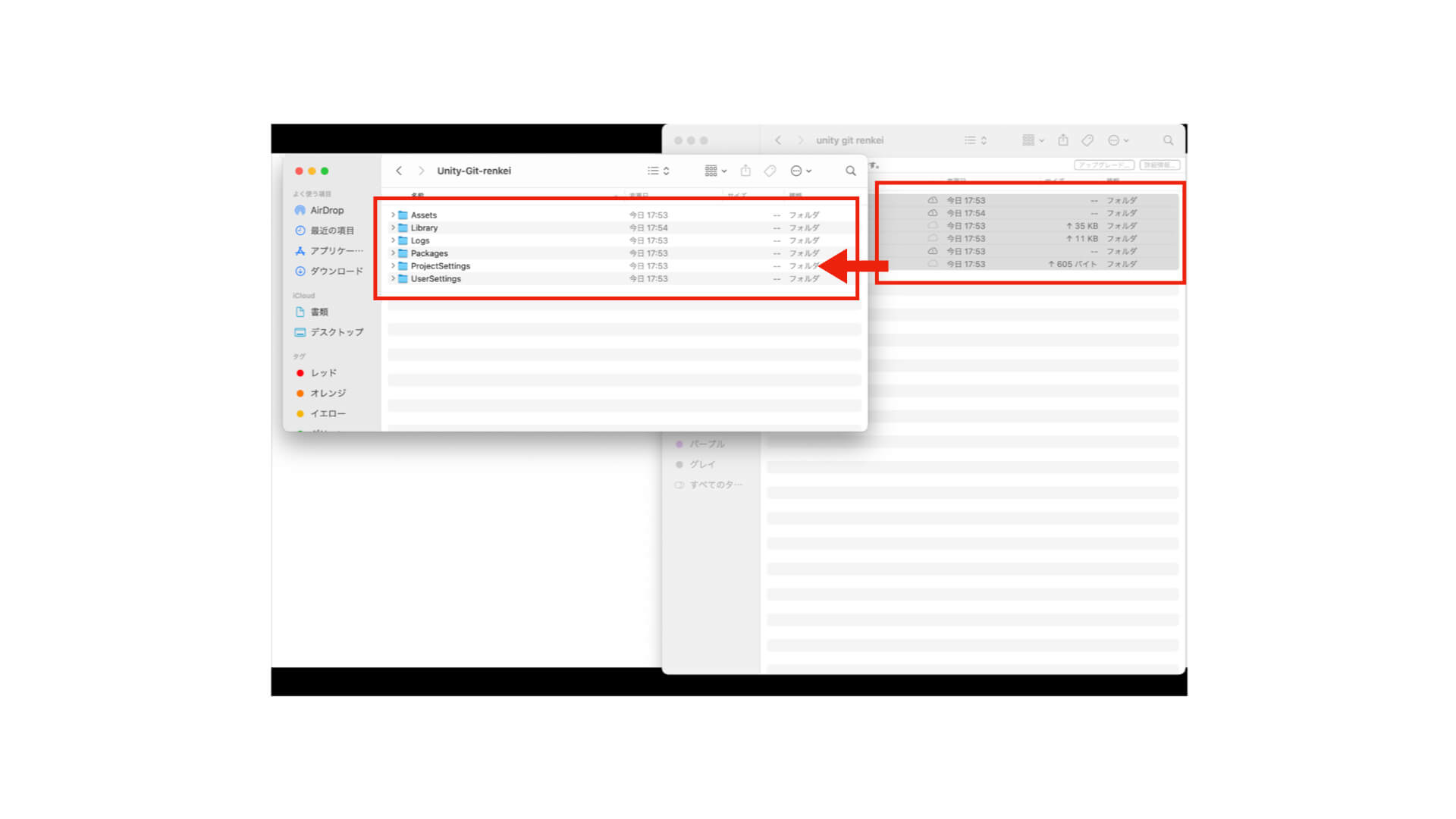 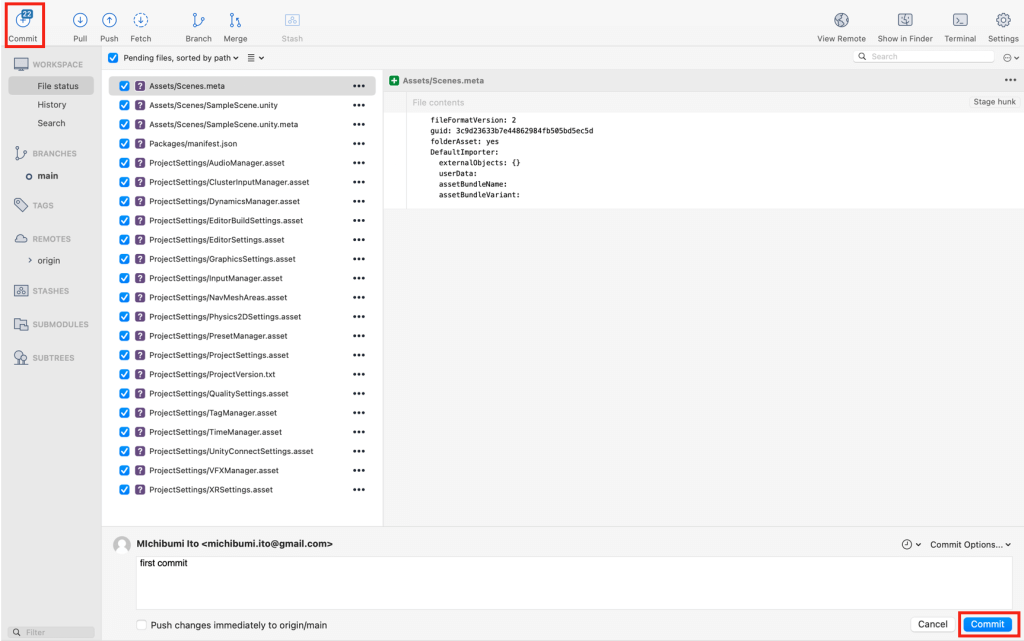 Screenshot of the source tree with Unity files reflected. Check “Pending File” and select “Commit” on the top left of the screen.

Then you will see the information of the Unity project files in the lower left corner of the SourceTree.
Select the checkbox to the left of the “Pending Files” to select all the data you have registered.
After you have selected all the files, select “Commit” on the screen (detailed explanation of committing is given later, so at this point you should be able to work).
You will then see a field where you can enter a memo for the commit, so enter a memo of your choice and select commit. In this case, I chose first commit.
This means that you have committed to your local file. 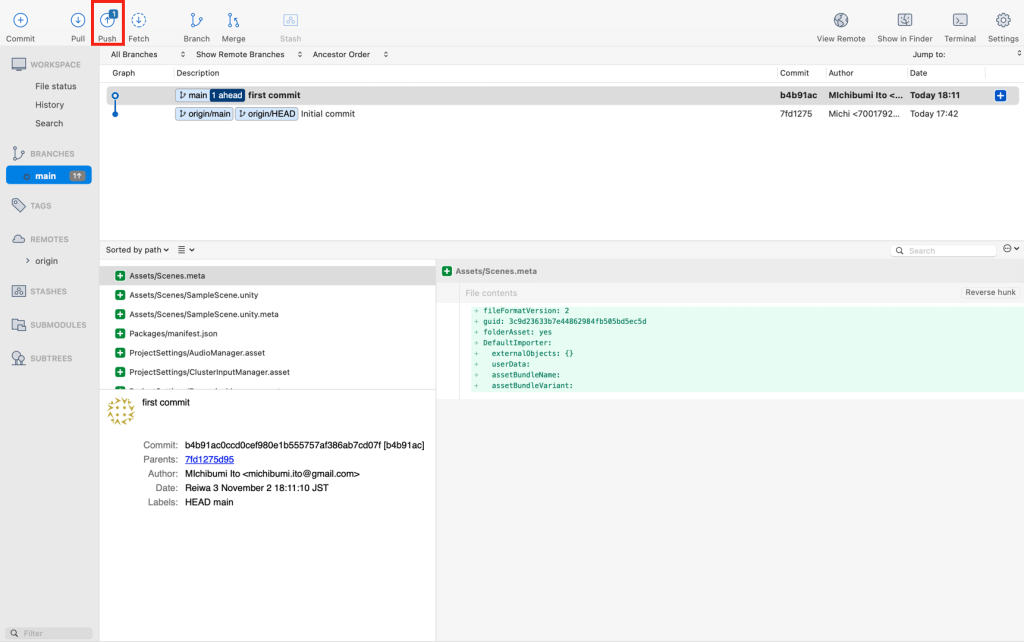 Save it to the online server by selecting Push.

Next, select the commit that you have registered (in this case, you can see the first commit that you wrote down earlier), and select “Push” at the top of the source tree.

This push operation will upload the current data to the server, and save your edits so that other editors can see them (a detailed explanation of the push operation is given later, so at this point, you only need to be able to do the operation).

After this, open the project that was moved to the clone in Unity.
The files you moved the folder to ​be opened from Add in UnityHub.

You can select a project from a folder from “ADD” in the upper right corner of the project selection in UnityHub.

You can create a Unity project that can be synced to GitHub by copying the data from the default project you just created, selecting the cloned file, and opening the project.

Copy the default project and open the cloned file in Unity.

Now you’re set up to update the files on GitHub with SourceTree, which will be saved in a folder when you update Unity!

From here on, I will explain how to use Unity and GitHub for collaborative editing and version control.
I will explain in the following order.

How to invite a co-editor

You can invite co-editors from GitHub. 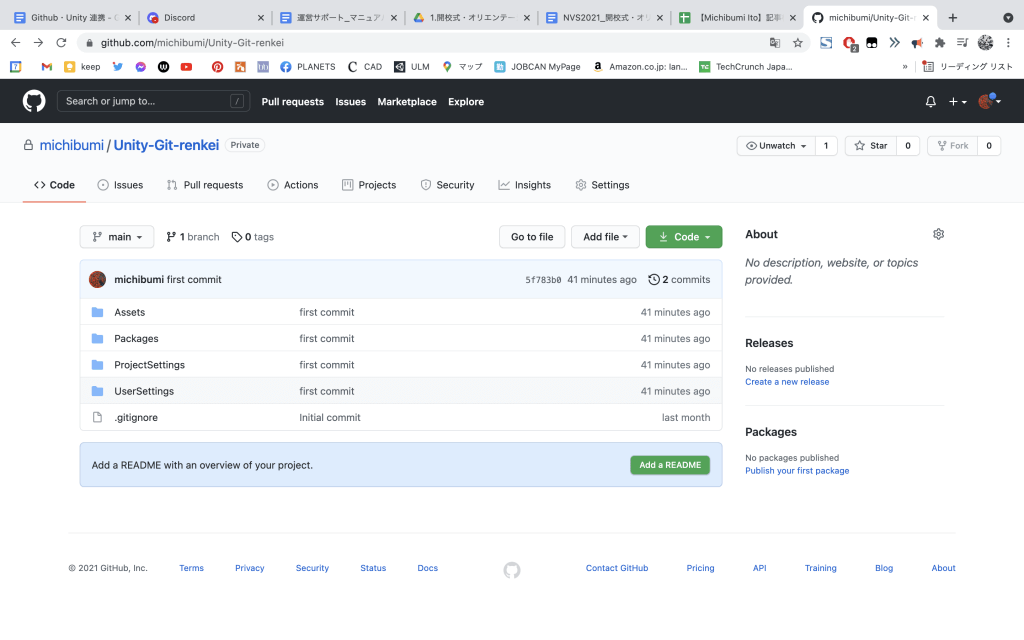 Open the applicable repository on GitHub and click
“Settings” on the right side of the menu that says “Code/Issues/Pull requests/Actions/Projects/Security/Insights/Settings”.
Select “Manage access” at the top of Options in the left column. 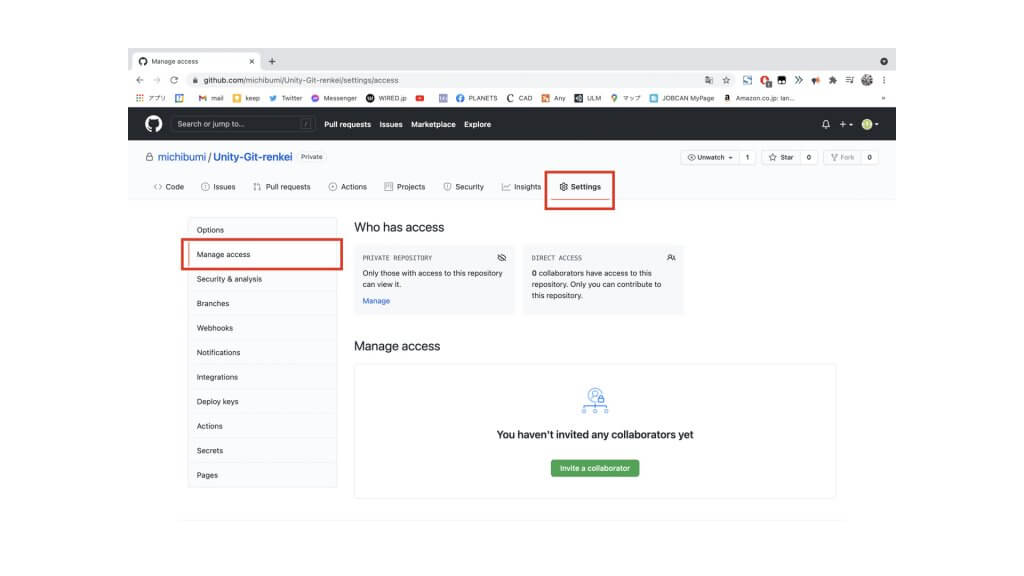 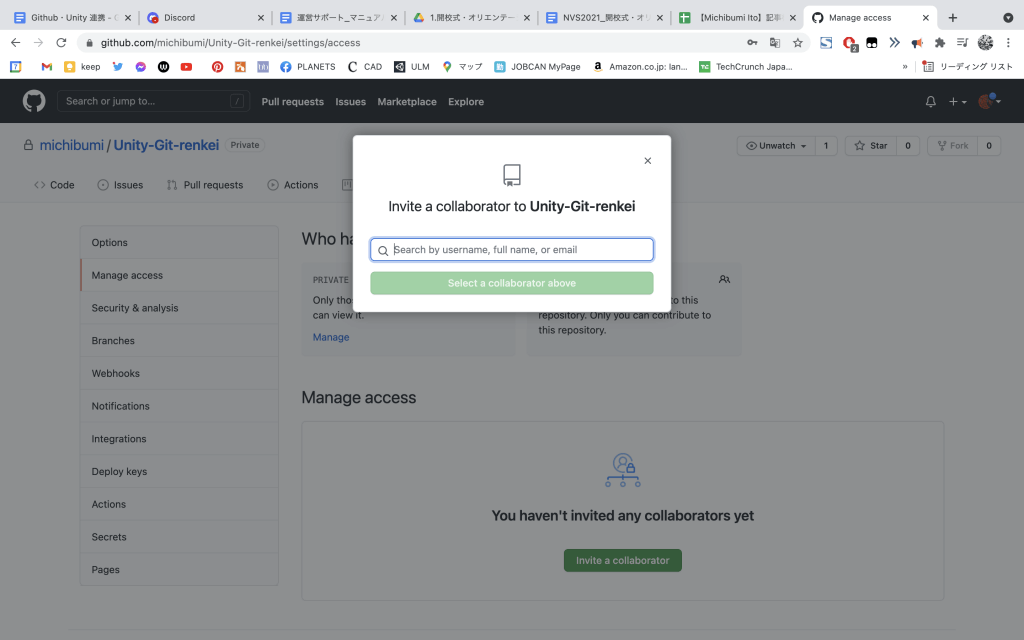 Enter the GitHub account of the person you want to invite in this box to invite him or her.

Explanation of the basic operation “commit”

A commit in GitHub is a command to register a file you’ve added or changed in Git.
Commit allows you to save your edits in Git, but at this point, if you’re working on a project, it doesn’t save the edits you’ve committed to other people. You will only be able to save your own edits locally.

Commit allows you to save your edits to your local repository.

Let’s actually commit the editing status of Unity to GitHub.

First, let’s make some edits to the Unity project we have just created (left).

This time, I put some cubes in the Hierarchy and also created a Prefab for it in Assets (right).

I made a prefab with lots of cubes in Unity.

If you “Save” this project and open the file of this project from Reveal in Finder in UnityHub as before, you will see that the above edits have been saved on the file. 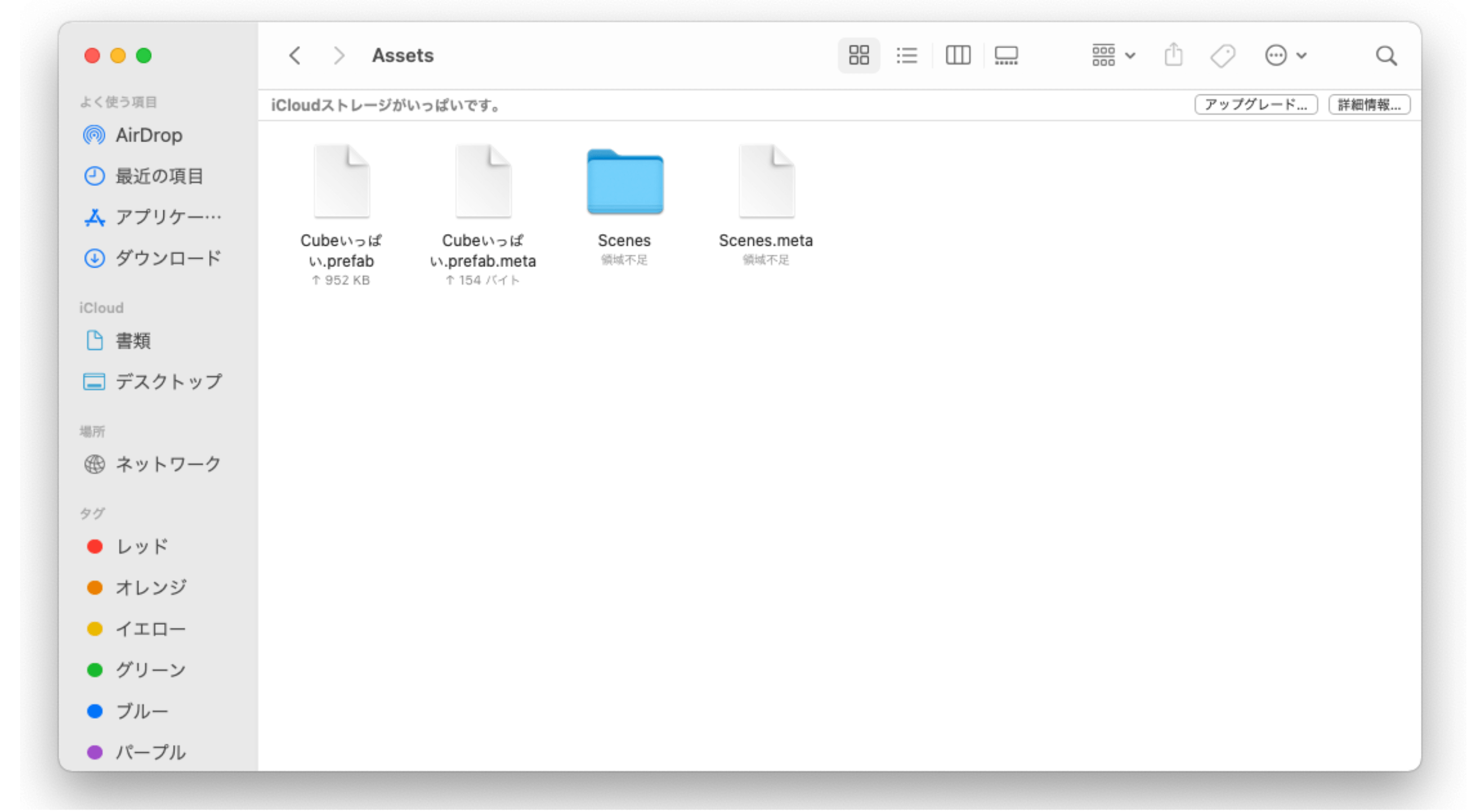 The state of Assets after Save.

Cube and its metadata are reflected in Assets (I won’t go into the explanation of metadata this time because it would be off topic).

Commit this data. In the pending files, select the one you want to save and choose commit. 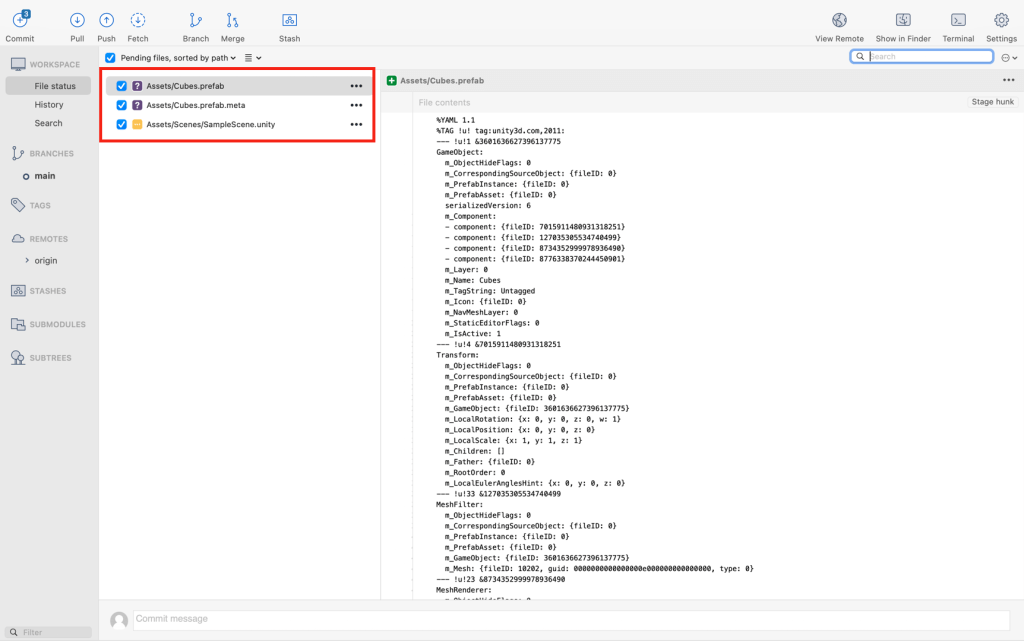 As before, make sure that the file you are saving is checked and select commit.

You can add a comment in the field below (in this case, I added “add CUbes”).
If you get a confirmation for the addition, press OK. Now your local repository will reflect your current editing status!

Explanation of the basic operation “push”

Pushing in GitHub means saving your local work to a remote repository (where you store your edits).

Pushing allows you to reflect the state of the edits that were saved in the local repository to the remote repository.

Select the one you have just committed and select push at the top of the source tree, you will get a confirmation as shown above, press OK.

This has saved the data of the edit status to the remote repository. Press “OK” to push the selected items as they are checked.

Explanation of the basic operation “pull”

In GitHub, a pull is the opposite of a push.
Pulling data from the remote repository, where collaborative editing data is stored, to your local repository to reflect the editing status in Unity is called pull.

By pulling, you can reflect other people’s edits stored in the remote repository to your own local repository.

When collaborating on a project using GitHub, you need to be careful.

If multiple people are working on the same thing at the same time, it can lead to a situation called a “conflict”, where someone’s work is not reflected, or the data is unintended due to overlapping edits, which can be the reason for errors and bugs.

In this case, you will get an error like “error CS 8300 : Marge conflict marker encounterd” in Unity.
There are several ways to avoid this conflict, but a simple idea is to separate the work area as much as possible.

The following ideas will help you deal with the problem. 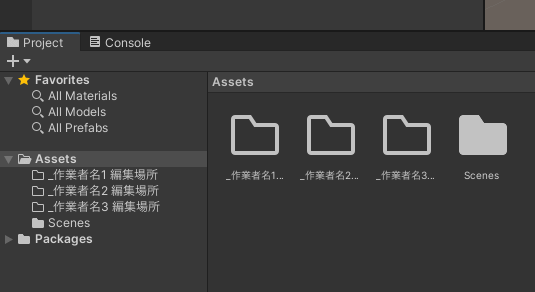 It’s also a good idea to create some simple rules for organizing and naming your scenes, prefabs, assets, etc., to make the integration process easier.

If you are having trouble with the conflict, please refer to some sites for solutions, as appropriate.

How to revert the editing status

You can revert the status of your edits in SourceTree.
If you accidentally commit/pull/push, etc., you can do so by following the steps below.

Right-click (or two-finger-click on mac) on the commit you want to revert, which is the one before the one you accidentally committed. In the tab that appears, select “Reset main to this commit”. 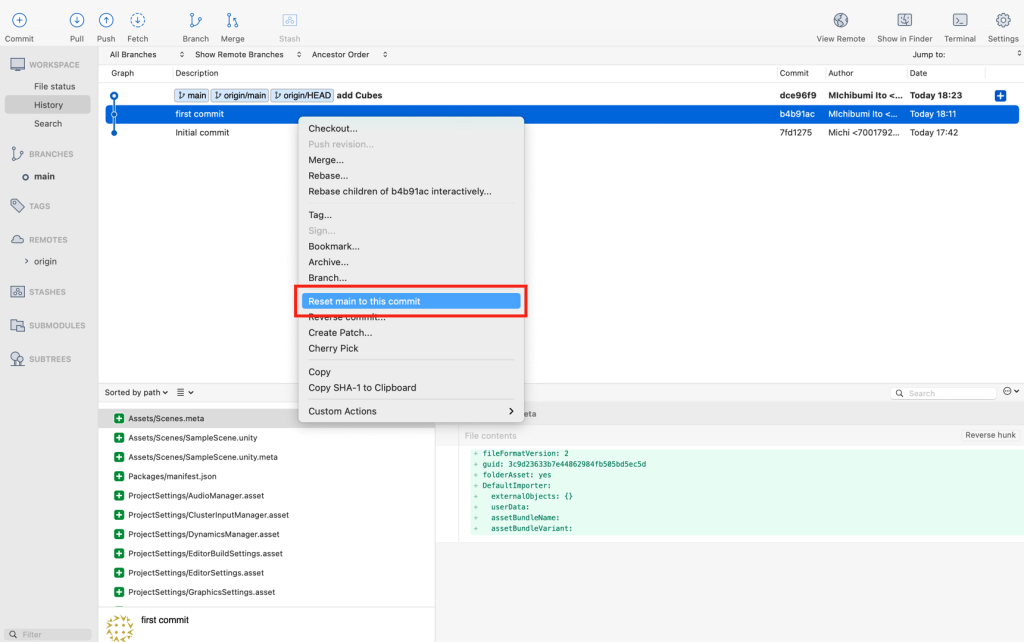 Select “Reset main to this commit”

This will bring up a tab like the one in the image below, where you can select any mode to complete the move.
If you select Soft, you can pretend that the commit never happened, so you can select the same file again and commit it again.
This allows you to revert any commit back to the previous one. You can choose any mode to revert to. Mix is the most common, and once you get used to it, you can select it deliberately!

Thanks for reading the long story so far!

If you’ve made it this far, you’ve basically got Unity and GitHub working together!

If you can handle the contents of the above article in Unity, you will be able to do the following

Also, there may be times when you inevitably get stuck in your work. In that case, you can ask us questions at “STYLY FORUM” where we have accumulated knowledge and questions for using Unity and STYLY, or refer to the article about GitHub.