This article introduces “Neo Tengri,” created by Ardak Mukanova from Kazakhstan, the winner of the GOLD award in the NEWVIEW AWARD 2021. Instructions on how to view the VR work are provided at the end of the article.

A Story Spun by its Virtual Nature

“Neo Tengri” is a VR piece about “Tengri.”

Tengrism is an ancient religion that spread in the Central Asian region, primarily in Mongolia, and centers around the gods worshiped as heavenly deities among shamanist believers. “Tengri” also means “sky,” which is revered as a being that watches over people from the sky and punishes them with bad harvests and floods. The above scene is composed of hazy purple earth and large surrounding planets, a colorful billowing mist, and small shimmering balls floating within arm’s reach. This scene has a very imposing and fantastic atmosphere.

Above the box marked “TAKE,” there is something glowing and shining that is floating above. 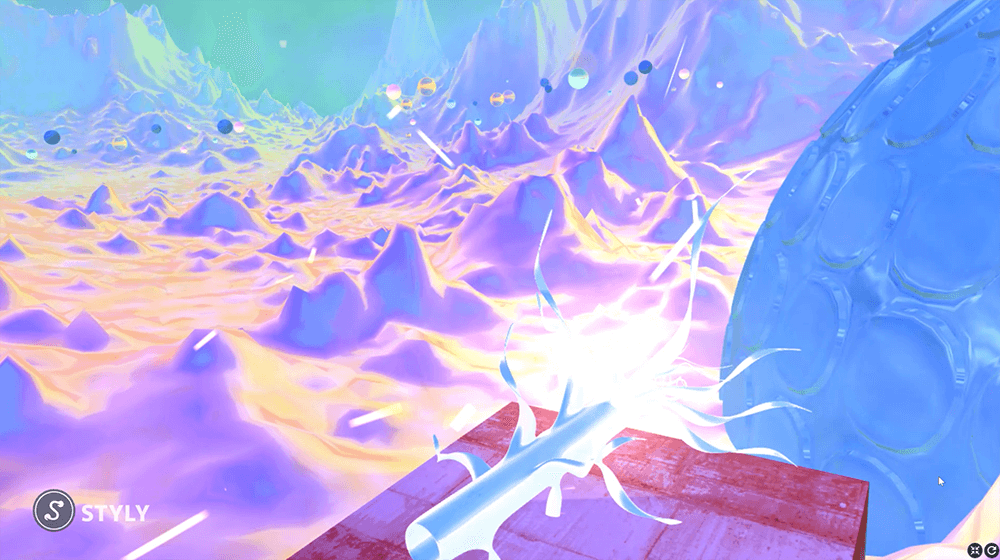 Approaching the box, we see something resembling a glowing tree branch. Let’s pick it up. 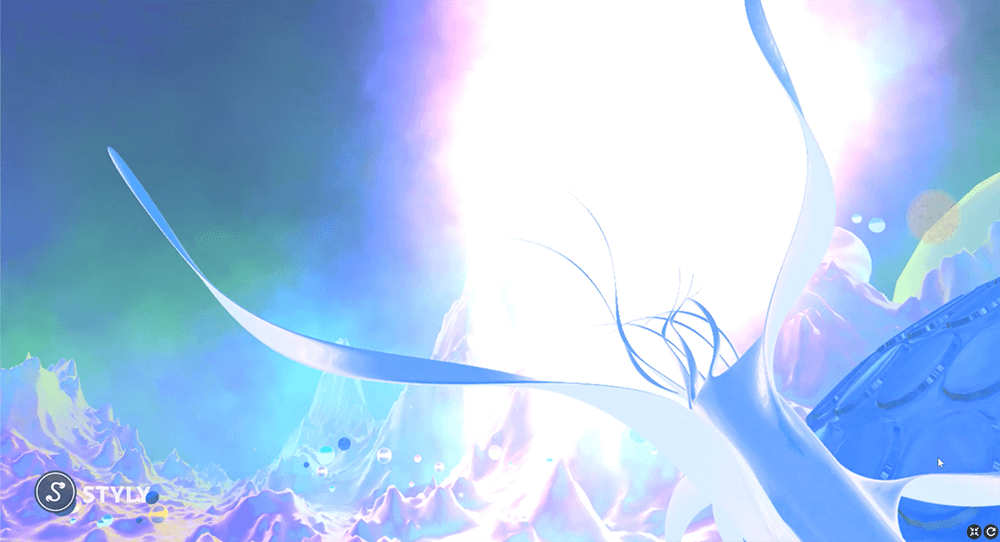 When we pull the trigger on the controller, fire shoots from the tip of the branch with great force. 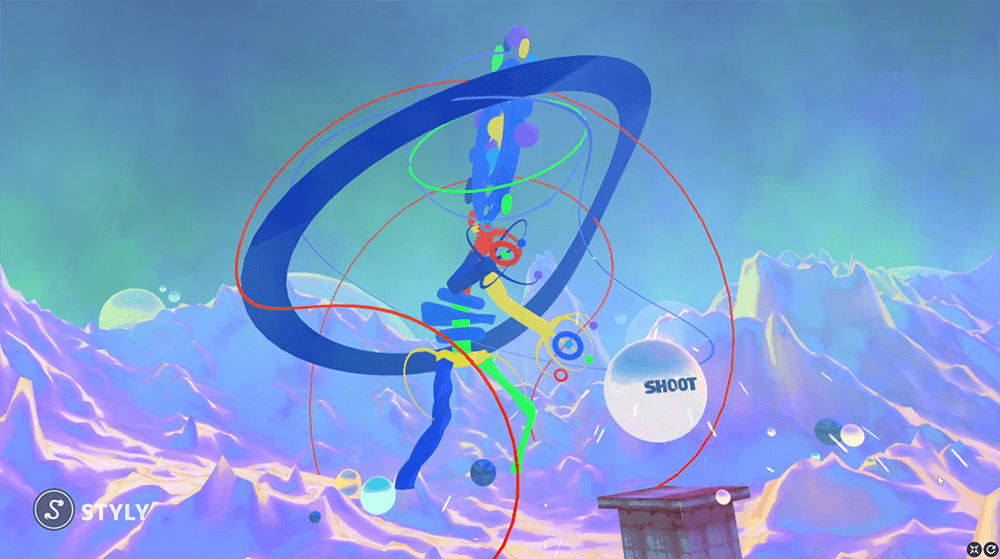 Looking around, you see a large creature that looks like it popped out of a cartoon drawing strolling along and dancing. The first impression of the creature is not very intimidating. In its hand it holds what looks like a VR controller. Let’s get closer to the ball marked “SHOOT” in front of it. 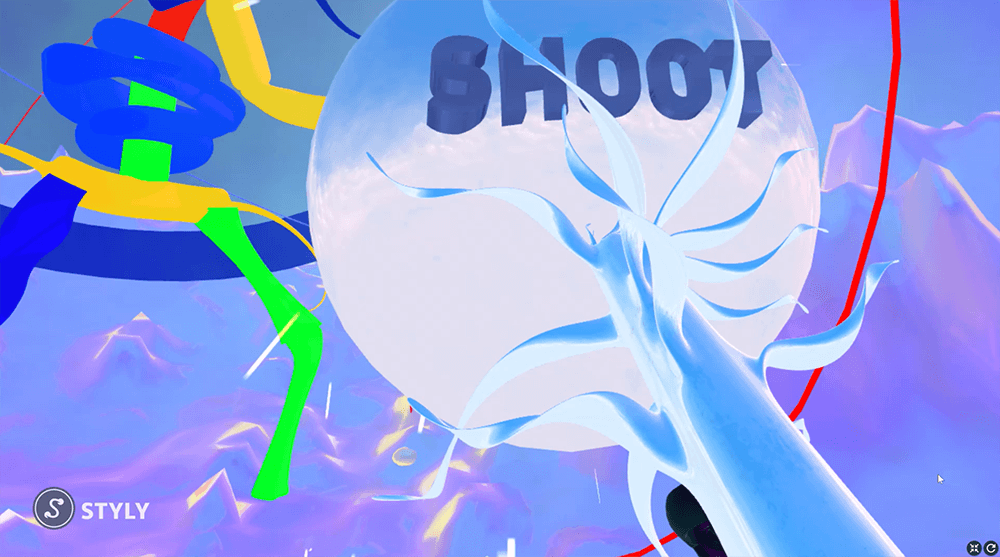 Let’s pull the trigger and shoot at the ball. 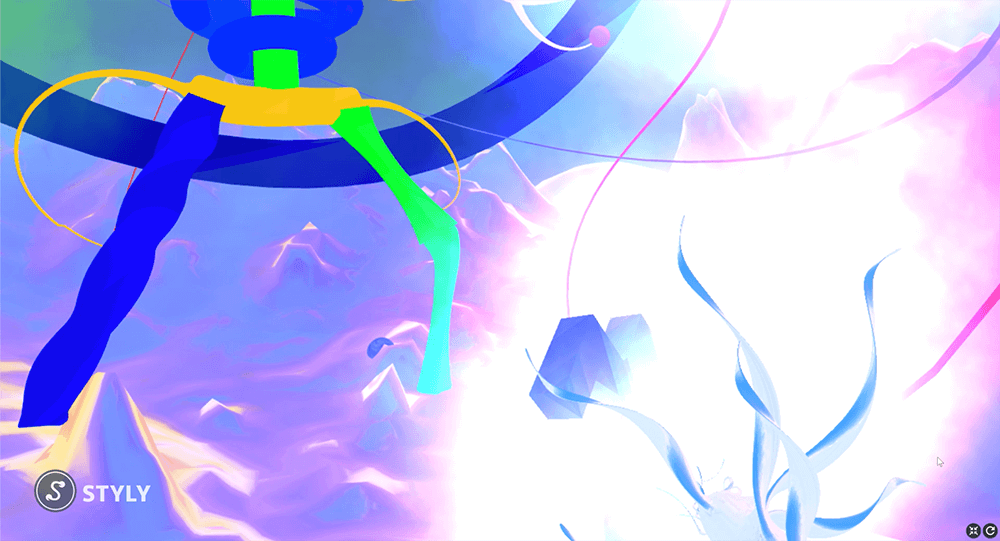 And the ball has disappeared! 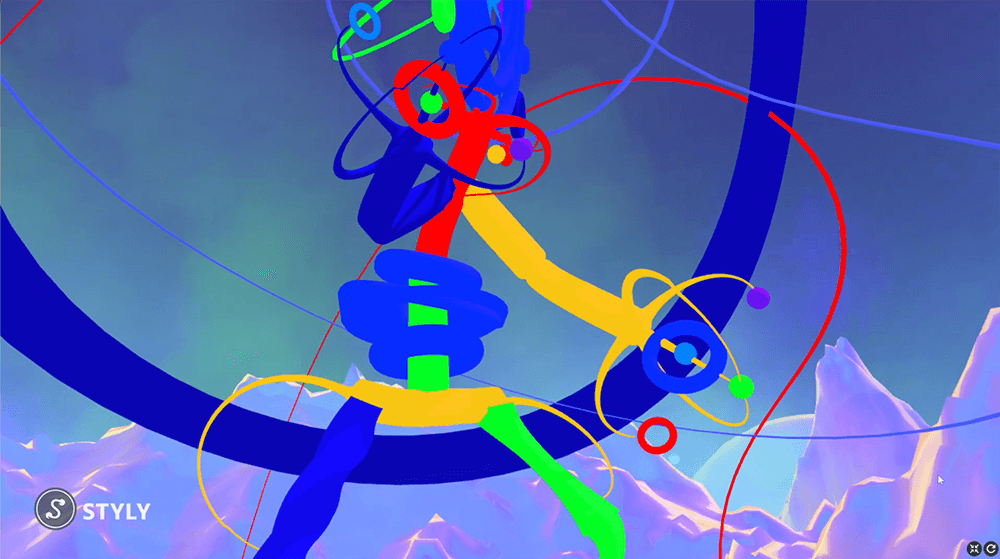 …but the creature is still dancing. 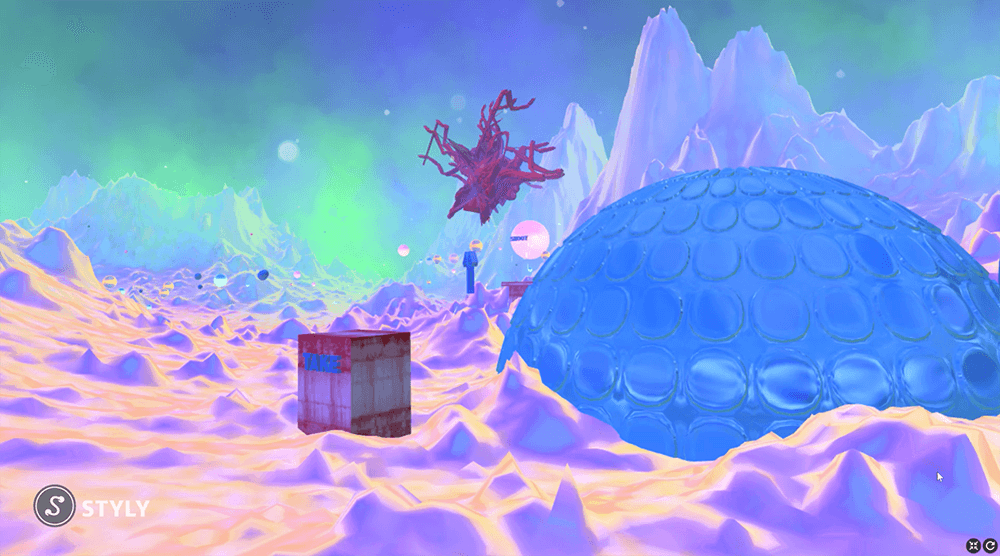 Turning to the other side of the scene, we see a new creature. Let’s get closer to it. 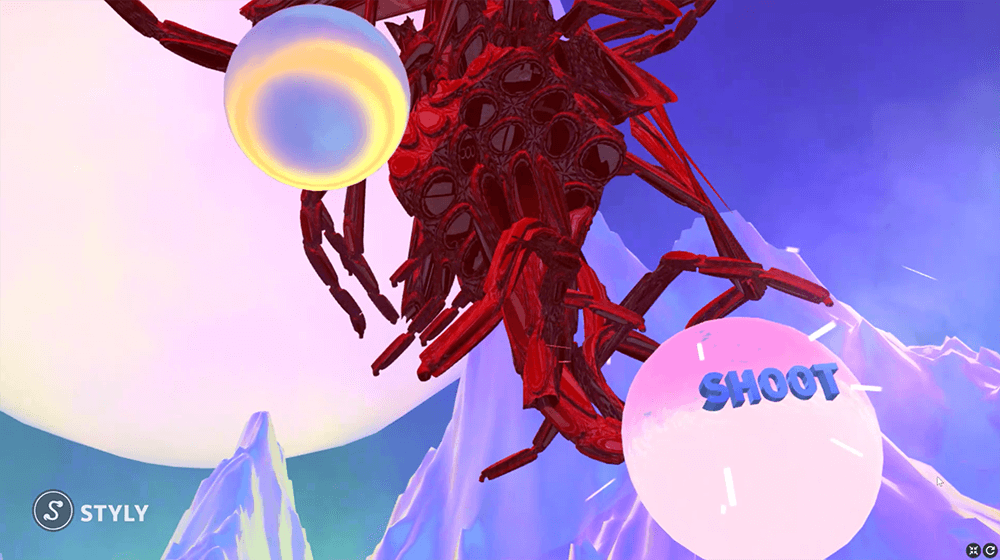 It is moving ceaselessly, and it appears reminiscent of a lobster or crayfish. 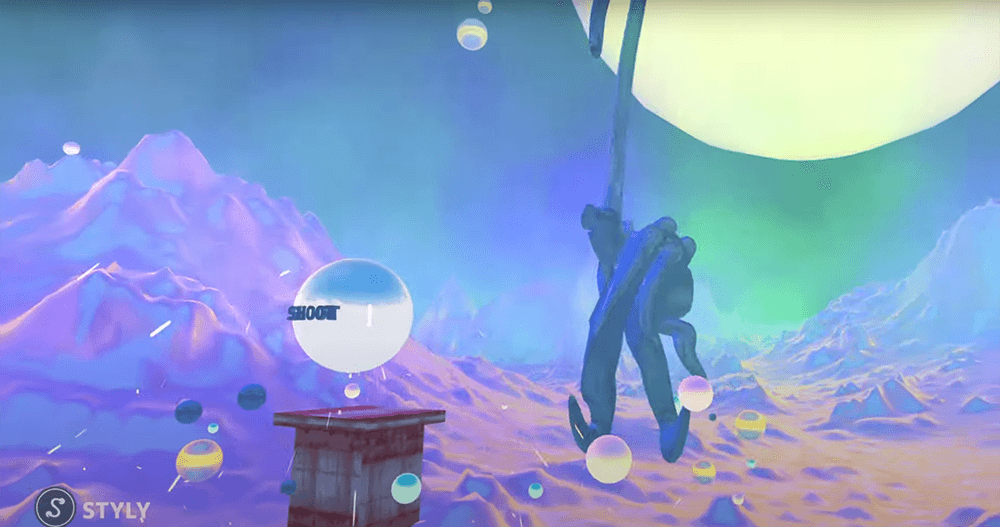 The next creature that appears is one that whips around its long, tail/tentacle/horn-like appendage. This creature has a dragon tail. It protects the ball while emitting a yellowish light. 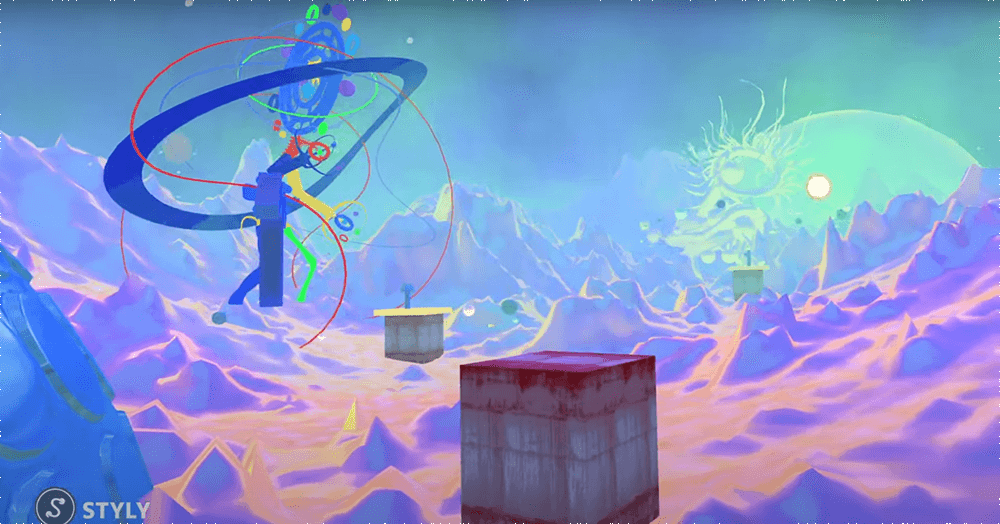 There’s a large unknown planet floating in the distant sky, and we are surrounded by unearthly but beautiful rock surfaces. In these scenes, here are many different creatures that we meet for the first time. One by one, we shoot down all the creatures’ balls. When they are all shot down, a pedestal marked “PRESS” appears. Let’s press the button on the pedestal. A human-like being appears and groans in agony. It crawls about like a dancer, repeatedly trying to get up but falling down again and again. The scene ends with a woman’s laughter and disturbing music.

*There is a second part to the project, but the first part ends here.

The Ancient God, Living at the Top of a Mountain and Representing the Sky

Ardak Mukanova’s description of the scene:

I’m interested in petroglyphs and the ancient nomadic religion called Tengrism and the ways we can interpret them. Tengri is an ancient god living at the top of the mountain who represents the sky.

Based on the petroglyphs’ archaeological insights and traditional myths, as well as self-speculation, I wanted to create an environment unfamiliar to us. A place where we can travel and try to communicate with unknown creatures using methods we don’t know and languages we don’t speak. We also don’t know anything about the creatures in this place, and therefore the environment is open to interpretation. 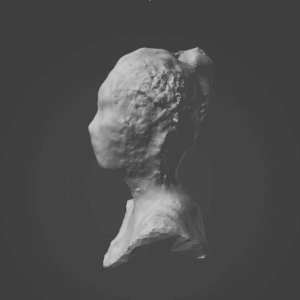 I’m a Graphic and Motion Designer working on both physical and digital projects, born and raised in Kazakhstan. I do commercial client work as well as personal creative projects, in conjunction with completing my MFA at Parsons School of Design in the United States. I completed both my BA and MA as a Graphic Designer at St. Petersburg University in Russia. Right now, I’m focusing on speculative worlds and other realities, which are imagined without humans. I’m trying to create a transmedia space, which is a compilation of a digital variety of mediums and physical accompaniment as well. I share my projects on Behance (https://www.behance.net/ardak_mukanova) and the process, oftentimes, on Instagram (https://www.instagram.com/ardakmukanova）

Handing down Beliefs and Myths

Religious beliefs and folk tales have been handed down through generations in various forms throughout history. For example, ancient Egyptian murals depicting myths, ancient gods and other religious and customary motifs are still preserved today. The Last Supper, a depiction of Christian doctrine, exists today as an oil painting on canvas, and the Great Buddha of Nara is a giant sculpture still enshrined.

The opera – based on Greek mythology – is interpreted and rearranged in many unique ways, and sometimes staged to reflect a certain time period. Furthermore, Esoteric Buddhism is passed down orally and leaves no physical trace.

In “Neo Tengri,” Ardak Mukanova reinterprets the Tengri faith and creates an original environment in the VR world. This approach could become a new approach oto handing down beliefs and stories. The word “indigenous,”which comes from Latin “indigena,” meaning “sprung from the land, native” implies that indigenous beliefs have taken root in the local community of a particular land. What will happen when these beliefs are passed down in the world of VR, away from the local, native community? Interactive experiences open up new possibilities for methods of transmission, enabling us to pass on beliefs that are rooted in lands far away.

“Neo Tengri” is a series of scenes with objects, nature and creatures designed using archaeological insights. These stories of faith, told in a virtual incorporation with nature, have brought new possibilities of interpretation through unknown encounters.

These Tengri beliefs, narrated in places far from their native lands, may continue to take root in the virtual space.