Introducing “Myth Building,” a VR work created by a Canadian computer graphics (CG) artist TRU_ ERIN ELMORE. This work incorporates many mythological motifs, and the worldview is composed entirely of sculpture-like 3DCG. In VR works and games, attention tends to focus on interaction and the way objects are animated. “Myth Building,” however, reminds us that it is possible to create a strong experience that envelops the viewer, even without interaction. This work was nominated as a NEWVIEW AWARD 2018 Finalist.

Plumbing the depths of Occult mysticism, Myth Building draws on embedded symbolic references of our collective unconscious. Existing in an ethereal realm and suspended in deep beliefs 🙂 this work plays with new and old imagery, storytelling and scale. Like Pompeii, the world is frozen. Trapped in the time line of a broken heart and the subsequent search for meaning post devastation. Through practice— artistic, meditative and spiritual we emerge from the ruins. Finding new meaning laden in the substrate of our culture, timeless stories and rich pros resurrect the soul.

Housed by STYLY, inspired by experience, Myth Building is a visual representation of the individual’s journey. STYLY functions as a container for the sculpts, unlike the institutional white walls of a gallery, the platform allows for full immersion and more intimate exploration of the avatars in this virtual sculpture garden. 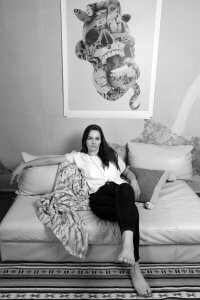 TRU is a new media artist investigating the intersection of humans and technology. Based in NFTs, animation, installation and print, her work explores issues of mortality, technological evolution and our new way of seeing –mediated almost entirely by electronic screens.

“With the emergence of archetypal figures like the Cyborg and A.I, we are being asked to question the age-old ontological gap between nature and technology, I find this spiritual intersection most fascinating.” —TRU

As soon as you open “Myth Building,” you are immediately enveloped by CG that appears to be frozen scenes from some mythological story.

The motifs of the figures are mostly women: some play with snakes and lionesses; some are bitten on the back of the head by male lions; some handle laptops in a relaxed posture; and others look up to the sky like a holy object. This is perhaps the artist’s self-image manifested in her spiritual activity through her meditation and artistic endeavors, as she explains in her statement.

Churches and other architectural structures with mythological motifs, such as the Parthenon, often have a variety of motifs of characters in mythology, each with their own clothing and tools depending on the situation. In this work, along with the very naked figures, the figures of everyday scenes, such as those wearing T-shirts, are dressed as if they were in the myth.

In the CG of this work, the objects have a strong sense of presence due to their figurative quality. This is a conscious effort by the artist to create this work from the perspective of exhibiting a sculpture in a VR space.

Rodin, the father of modern sculpture, said that “sculptures are best displayed under natural light” (quoted in Labyrinth of the Body, Atsushi Tanigawa, 2013). In comparison to the white walls of a gallery (also known as a “white cube”), the artist appears to have considered how best to have objects bathed in light within a CG space, setting the colors of light and sky that are only possible in a VR space.

Interaction and Moving Objects in VR

“Myth Building” consists of nothing more than a collection of objects scattered randomly throughout the space.

In this way, “Myth Building” succeeds in involving the viewer in the sensation of experiencing a painting, sculpture, or installation at a museum. When considering the vast amount of CG and its ability to evoke stories from its content, the expression of objects without motion in “Myth Building” adds an impression of spaciousness to the power of those objects.

VR as an Autofiction

“Myth Building” deals with unconscious ideas and mythological motifs, creating a templelike space, as the artist explains in her own words.

This is like the different images one may associate with the word “man” when reading a certain text. Is he an old man or a young man? Is he a Westerner or Japanese or someone from another country? One of the interesting aspects of VR works is that such differences in perception are reflected, for example, in the color of the sky and soil, in human physique and gestures, in the way time progresses, and even in the meaning of the term “VR.” The famous Japanese poet and writer Miyazawa Kenji called the activity of writing his poems from this perspective “mental sketches.”

In Buddhism, the world conceived by one’s own perceptions is described by the concept of “vijñapti-mātratā,” which means “consciousness only.” This kind of expression is sometimes called “autofiction” in the category of novels. Generally, autofiction is a text woven by an author that overlays the author’s own life story with a fictional story that incorporates the author’s own characteristics. When an artist creates a VR work or 3DCG space, various concepts held by the artist are reflected in the work. “Myth Building” is one such VR work that uses this form, as the artist aims to create a world based on her own myths and images of the unconscious.

If you were to give form and color to words like “myth” and the “unconscious,” what kind of scene would come to mind? And, if you were to develop that scene into a VR work and make the image visible to other people, what would it look like?

[VR] If you have an HMD device, click the “Experience the Scene” button from your PC (web browser), then click the VR icon on the scene page.

[AR] If you are accessing this page from a PC (web browser), you can experience the scene by clicking the “Experience the Scene” button, selecting the Mobile icon on the scene page, and scanning the QR code.