In this article, I will explain how to use this asset to create an animation that poses as shown below.

Here is an AR scene using the animation created with Very Animation.
You can start the scene by reading the marker in the STYLY Mobile app. 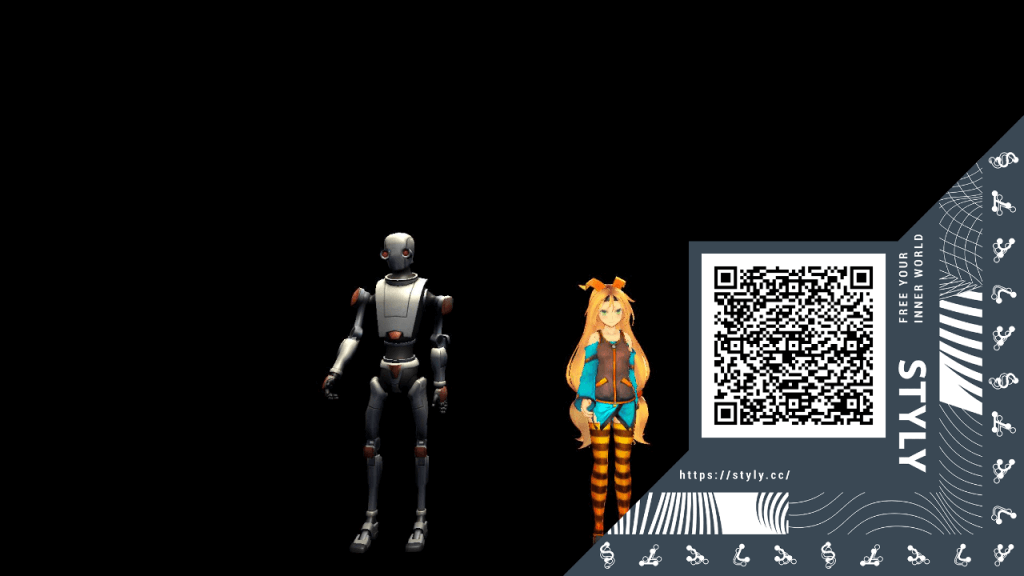 We will be using these three assets, please download them from the following link.

Modifying the rig and setting up the animator

First, let’s create an animation using the Robot Kyle model.
Select the Kyle model, go to the Rig tab and change the “Animation Type” to “Humanoid” and Apply.

Also, since it is difficult to see the model in its current state, let’s change the shaders in Kyle’s material.
Select the material from Robot Kyle > Material > Robot_Color and change the shader to Unlit > Texture.

Change the shader to Unlit

Next, we’ll add an animator controller to Kyle.
Create an Animation folder directly under Robot Kyle, and create a new Animator Controller in that folder named “KyleAnimation”.
Also create an Animation in the same folder called ThumbsUp.

Create the animator and animation

After creating the Animation, open the Animator window from Window > Animation > Animator.
Select KyleAnimation from Project and show KyleAnimation’s layer.
Drag and drop a ThumbsUp onto the BaseLayer and add an animation to the controller.

After that, let’s drag and drop KyleAnimation to the Controller of Robot Kyle’s Animator component and set it up.

Setting up an animator on a model

When the VeryAnimation window is in the following state, you will be able to edit the animation.

Now let’s open the Edit tab by pressing Edit Animation. We will use the following three to edit

In the Setting section of the VeryAnimation tab, you can select the language from English or Japanese.

Changing the initial state to a standing pose

First, let’s change the pose from the initial state to a standing state.
Go to VA Editor > Pose > T-pose and set the character to T-pose.

Changing the initial state to T-pose

You may then see a warning like this in the VeryAnimation tab.
If you see this warning, you can resolve it by opening the ThumbsUp animation from the Inspector and setting Based Upon to Original and the Offset value to 0.

You can change the pose by rotating the shoulder joint (the round part).

You can edit the pose by rotating the joint.

You can also change the pose by adjusting the parameters in the VeryAnimation window.
Take advantage of this to create a standing pose for your character.

Can also be edited from the window

As it is now, the default animation is attached, so we will remove the second keyframe in the Animation tab to make it stationary.

Now we can set the initial state to standing pose.

Set the slider in the Animation tab to 1:30.
Set the positions of the shoulders, arms, and hands to create a thumbs-up pose.

This is where you can show off your skills.
Try to move various parts of the finger so that the pose is natural.

Try it with other models

The animations created with VeryAnimation can be used on other models as well.
Let’s try playing the thumbs-up animation with Unity-chan.

The model of Unity-chan is created with the imported asset
Unity-chan! > Unity-chan! Model > Art > Models folder.

Create an animator for Unity-chan

Let’s play Unity.
You can see that the animation we just created has been applied to Unity-chan.

You can reuse the animation.

How to upload 3D model to STYLY

In this article, I showed you how to create your own original animations using the VeryAnimation asset.
It is easy and intuitive to use, and you can complete the creation of the animation within Unity.

You can also edit existing animations with VeryAnimation, although I didn’t introduce it in this article.
It’s also useful when you want to make small changes to your animations, so please try it!