‘Scary buns’, a VR rakugo (a comic story-telling), created by Eri Inami, a graphic artist and art director. It is a non-conventional work that makes viewers read through a story with graphics by guiding them along a one-way straight route despite the three-dimensional spread of VR space.

How do I show my originality? It is her way of thinking and emotional conflicts to stand out from the other creators that make this work even more interesting.

In this interview, I asked about the concept and design process of Inami’s ‘Scary buns’. 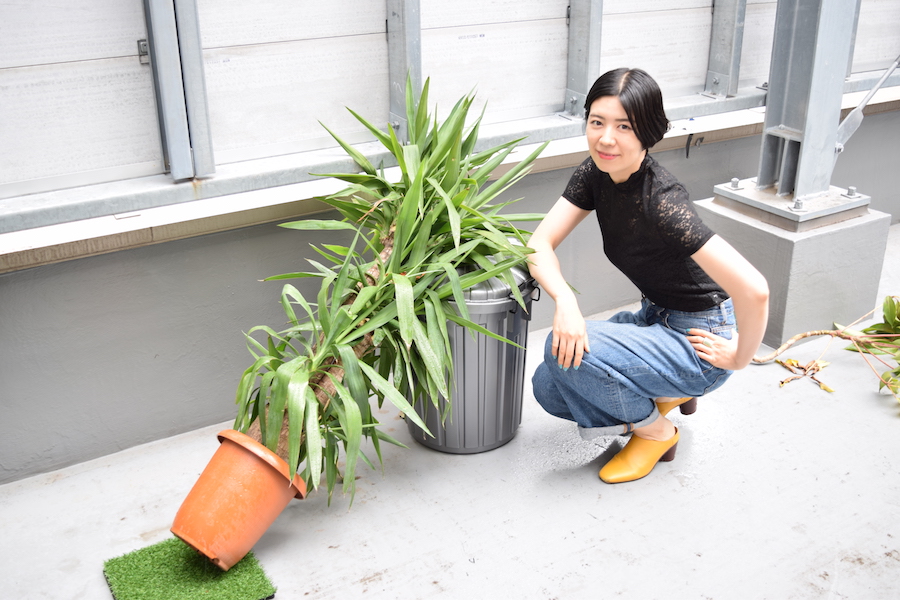 In 2003, she graduated from the Visual Design course at Sokei Academy of Fine art & Design. After her stay in New York, she started activities as a graphic artist and art director from 2010. Focusing on graphic design, she is active in various fields such as video, product, space design, textile, regardless of the type of media. In recent years, she provided her art work to the window display at Isetan shinjuku store, the advertisement of PARCO, and the advertisement of NEWoman.

Create and show a VR with full of wit and humour

—How did you feel when asked to create a VR work?

Inami: To put it simply, it sounded interesting, so I was glad to hear that. Except for an experience with VR, I had never made any VR content by myself. But, since I had been influenced by games for a long time, I didn’t feel any hesitation. However, I had never thought that I would make a VR content because I had not created any 3D content.

—What was your first impression of STYLY?

Inami: In the meetup event NEWVIEW creators were invited to at the end of 2017, I had an opportunity to taste STYLY. But, at that time, I couldn’t use it as I like. Since there were so many people I respected, I got nervous at first.

The most difficult point was that the VR didn’t have any ‘frame’, unlike 2D design, in which I could set its frame size at the beginning.

In addition, I had to be aware of how differently 3D space looked from 2D design. For example, I need to check from various views to arrange objects correctly in 3D. So, it took time to improve the 3D space until I can actually test it as a VR space.

In the beginning, it took quite a while to set the concepts for the expression, the space layout and etc. because it was not so easy to get used to the operation.

—How did you build up the concept?

Inami: First priority was to avoid taking the same direction of work as other creators, so I started thinking about the best way to create very original work with my artistic style expressed.

I tried to use 3D models in Google Poly, but the result didn’t look sophisticated very well. I felt the tools were beyond my control and quit it. Even if I made a  VR space from the data that I could find in a shared 3D-model site, I couldn’t match the people who already had experience with creating a VR work. So, I caught up with the idea of going back to my roots, making good use of my graphic-artist skill to make a VR space.

However, I couldn’t create 3D by myself, and there was no sufficient time to ask a 3D creator to do it. When I was thinking about how to justify the use of 2D, I happened to remember a game, ‘PaRappa the Rapper’, which I used to play before. In that game, the characters were not 3d but 2d, which gave an interesting taste by its ‘incompatibility’.

I was very glad to find that ITO GABIN, an editor I look up to, was one of the judges at NEWVIEW AWARDS 2018 because it was him who produced this ‘PaRappa the Rapper’ (lol).

I also wanted to add one more thing that I had not seen anywhere else, so I caught up with the idea of adding an action, ‘reading’.

Since I had heard that NEWVIEW would hold events around the world, I selected a classic comic story-telling, ‘Scary buns’, which is a very Japanese-style culture and I love it for a long time. 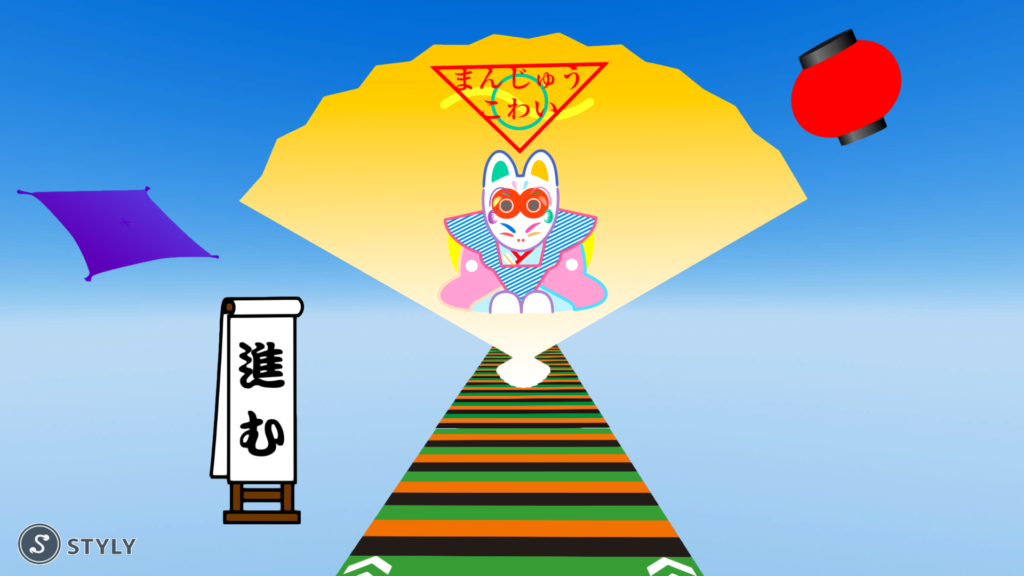 —How did you create this work, ‘Scary buns’?

Inami: Firstly, I made a summarized story from the original and created the graphical characters. Then, I drew the graphics of the scenes along the story, but I faced a problem, how to show the story in the 3d space where people can look around in 360-degree view.

To solve the problem, I gave up the three-dimensionality, the most remarkable advantage of VR, by making a straight route so that people read through the story in one direction.

Like a picture-story show, the visitor can understand the story in a casual way by walking along the route while viewing the graphics on the layers. I planned to create such a VR space.

I drew about 70 layers of graphics and lines for this VR space. In fact, I also placed some animated arrows on the footpath. I think they spiced up the scene. 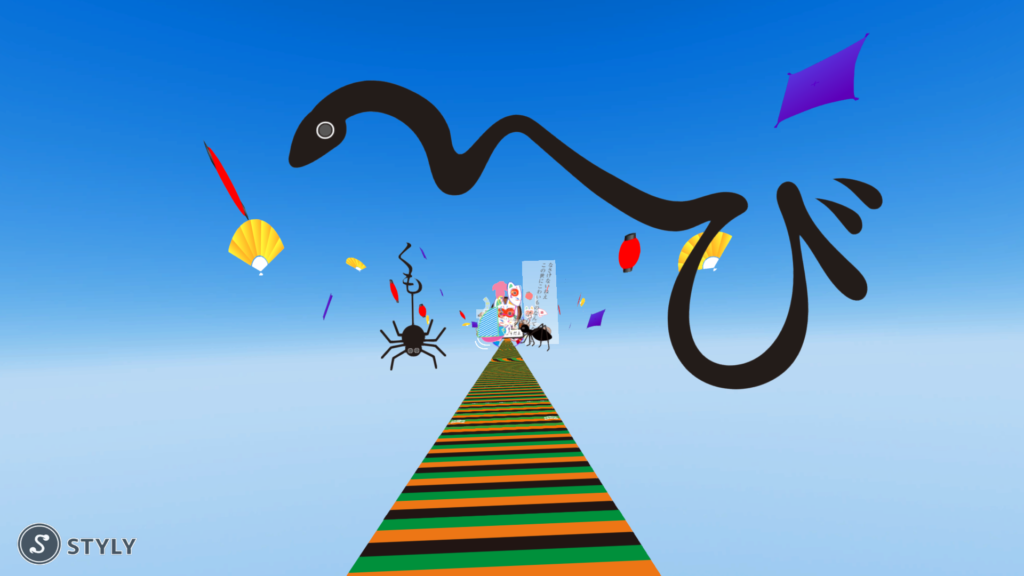 —How long did it take to create the work?

Inami: It took about a month including trial and error. A series of trial and error took the first two weeks. But, once I set the direction, it accelerated the design process. I made the graphics first, then placed them into the VR space. Finally, I adjusted how they looked while checking the whole VR space. That’s the sequence I used.

In this work, the story ends at the end of the VR space. So, the goal has been set clearly. It helped me to see how the design work progress to the completion.

I also intended to make it look very original by ‘reversing’ all conventional approaches, making ‘the multi-directional’ into ‘the one-directional’, and ‘infinity’ into ‘limited space’. 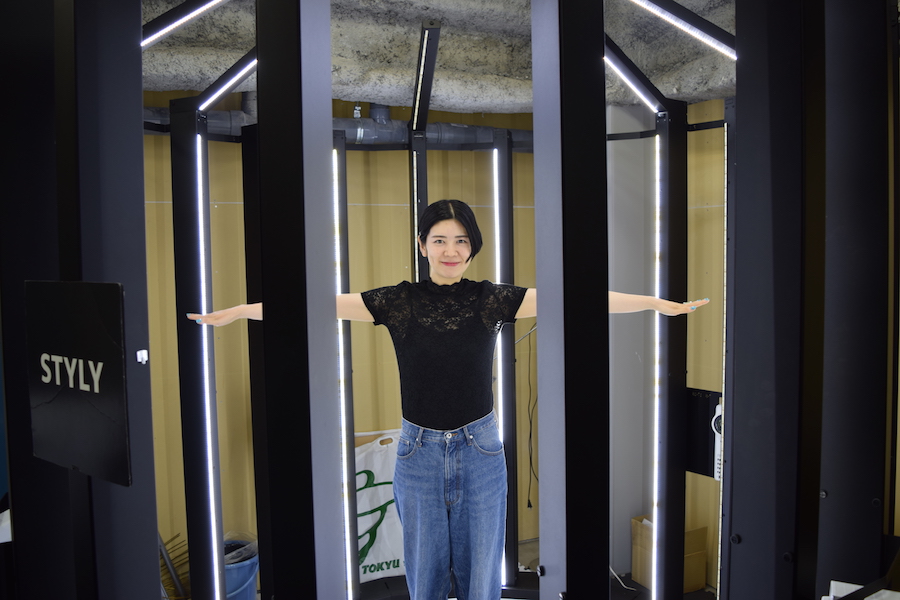 —How did you feel creating the VR work?

Inami: It was not easy to create the work, but I really enjoyed seeing the others’ works created under the same theme. I always think that the creation is ‘Oogiri’*, so I was interested in the various answers they made.

*A Japanese traditional comic dialogue to tell your best joke for the topics set.

Ms Inami showed a new way of VR expression by non-conventional ‘reverse’ thinking. For example, in this VR work, she found her own approach to VR with her wit and originality and then caught up an idea of ‘limiting the infinite space’ to achieve the design intention. What will we witness in her next VR work?