Nowadays everyone has a smartphone, and uses the internet. Photos are now digital data, and are a worldwide media through the web.

A artwork that shows us a glimpse of the future, how the photo media is going to evolve, is “prints” created by Mr.Matsuoka, photographer and programmer.

Today, I interviewed Mr.Matsuoka about his creation. 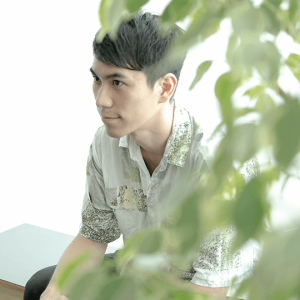 Born in 1991. Graduated from Tokyo Metropolitan University, faculty of systems design in 2016.
Interests: Use of photos as a expression media / Circumstances surrounding photos as a media

VR will change the relationship of photos and us

– Congratulations for receiving the Hideki Matsutake award! How did you first learn about NEWVIEW?

Mr.Matsuoka：Thank you very much. I was not expecting such a result, and am very grateful.

I learned about the commemorative award event on the web, and decided to apply for it.

– What made you decide to apply?

Mr.Matsuoka：I saw a comment that “Since this is the 1st event, nobody has any idea what kind of creations will show up, but we are very excited”, which made me think that taking this challenge would be fun.

– What is the concept of your creation, “prints”?

Mr.Matsuoka：It is less than 200 years since photos were invented, but the evolution of digital technology such as the internet and smartphones has changed the relationship of photos and us.

Nowadays, everyone has a camera in their pocket, and can post their own images through the web. People also see tremendous amounts of images everyday. I think that VR technology will bring more changes to the relationship of photos and us, which led me create “prints”.

I think that photos are an interactive media. Of course, photos are a still image, but for example, when looking at a large image you can look at it from a distance, or focus on the details. If you are looking at a photo album, you can flip to the next page, return to the previous, or focus on a photo covering two pages. When you “look” at something, the action is interactive. I think that by using VR tech, I could make people become aware of how they “look” at something.

I wrote this on the statement of “prints”, but another motive was to study how photos appear in a area calculated by computers. Be it silver-halide photos or digital photos, photos are made by fixing light that enters through lens to grids such as particles or pixels. I tried to create photos in VR using a single particle.

prints from STYLY on Vimeo.

– I see. You currently work both as a, photographer and programmer, but what made you start photography?

Mr.Matsuoka：I wanted to start something new when I became a university student, and I found that I enjoyed taking photos very much when I first tried it out.

One day, a gallerist recommended a book by Naoya Hatakeyama “話す写真”, which made me interested in studying photos as a media, and started creative activities.

– Thank you for the details. May I ask you about the steps you took creating “prints”?

Mr.Matsuoka：The photos I used in my creation were took by a depth camera, Realsense D415 by Intel and a tablet computer. I used a visual programming environment called TouchDesigner to create the controlling software.

(To tell the truth, I originally wanted to control the depth camera with a tiny computer called Raspberry Pi, and keep the whole system size about a compact camera, but I needed more processing power)

The texture with color information and depth information is used in exchange of a negative for film cameras.

Using this negative, I used a DCC tool to create a 3D point group, and deformed it to enable uploading to STYLY. This process is the same as developing and fixing for films. After this process, the creation is completed by placing the finished image to the scene.

I started thinking about my concept as soon as I learned about the award, and it took about 1 month for testing and creating the whole project. 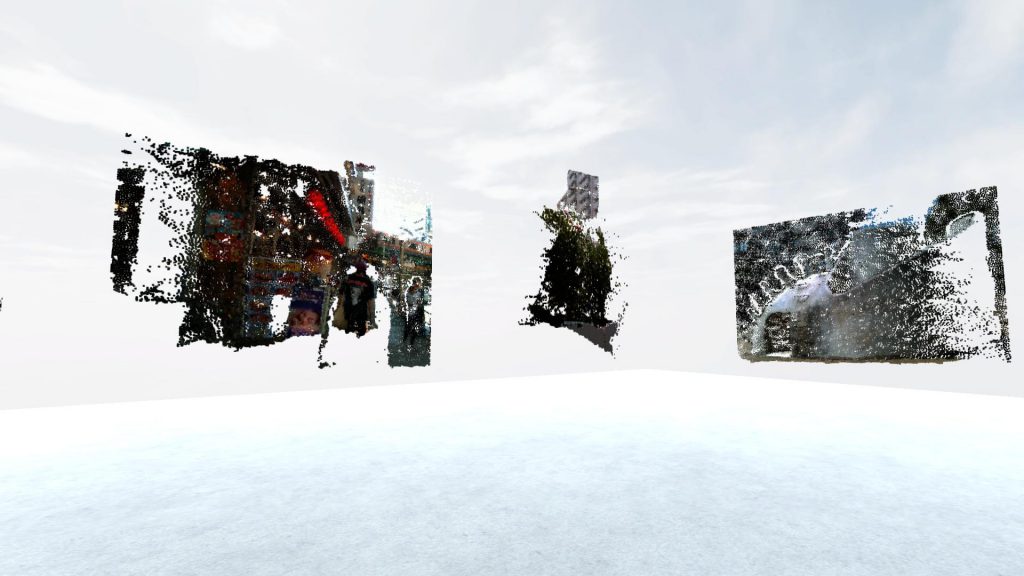 – What did you put in your efforts the most?

Mr.Matsuoka：At first, I tried to place the 3D point group with points, but through testing, I decided to deform the points to small round polygons. This change made it so that the appearance of the photo changes by distance and direction of sight, and made it clear that it is a point group, making my concept clearer too.

– Thank you very much. Do you have any plans for the future?

Mr.Matsuoka：I have a vague idea to study more about VR technology, and try to use what I learn for a photo art.

When you hear about VR, most people tend to think about 3D, but 2D medias will most certainly be affected too. What will happen to them? Will they disappear, or will they change form?

There may be a hint for future media expressions here.

How will VR change photos? I am going to pay close attention.