There were 219 entries of VR works from 7 countries into ‘NEWVIEW AWARD 2018’, a global award for VR contents in the fashion/culture/art field. In the competition, we saw the artists had various titles such as filmmaker, photographer, picture book writer, musician.

Although every artist rendered a unique artistic world, what really stood out was ‘SALLARYLAND’, the VR content designed by Dave Maggio, 3DCG artist who was born in New York and lives in Tokyo now. His VR space is spiced up by various 3DCGs such as drunk people, canned beer, bar, which makes us feel what is a typical salaried worker.

I wonder if people from overseas could feel Japanese salaried-worker culture strange after all?

In this interview, I asked Mr Dave Maggio, the creator of ‘SALARYLAND’, about this VR work. 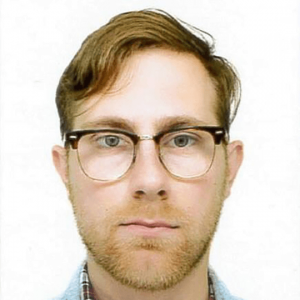 Born in New York and now Tokyo-based artist. He is exploring the next frontier of 3DCG through his experience with game industry. He held a group exhibition, ‘Nightwork’ in April 2018

Dave Maggio: I learnt about it on Instagram! Around this February, the artists I follow (Denske28 and Ms Eri Inami) posted about the public talk of NEWVIEW, so I went to see it because I was interested in.

It was the first meetup of NEWVIEW although I didn’t know about it at that time. It’s really a coincidence!

— I am surprised that such a thing happened! You just happened to participate the meetup, didn’t you? If so, what made you decide to apply for NEWAWARD 2018?

Dave Maggio: I love to challenge a new thing!

As a 3D artist, I worked on some game and video projects before, but I didn’t have many opportunities to try VR since it’s expensive. In addition, I couldn’t program, so I couldn’t create a VR space by myself even if I wanted to. However, I thought I could ‘t help making it this time because STYLY is free and doesn’t require any programming skill.

It’s my very first VR work, so I didn’t have much experience. But, I thought I could do an interesting challenge at least!

— How did you know about STYLY？

Dave Maggio: I learnt about it in an event for NEWVIEW for the first time. I didn’t know about any details of VR. So, I actually learned that there were a lot of  HMDs besides Oculus Rift and HTC Vive in that event.

— What is the concept behind the ‘SALARYLAND’ you created this time?

Dave Maggio: Originally, in this April, I produced an art work with the theme of ‘salaried worker’ for a private exhibition.

When I got to know about NEWVIEW AWARDS, I thought, ‘It should be interesting if I created a VR work about a salaried worker’. So I place the ‘Another World’ background and surreal characters to render the world that make viewers feel what is ‘the salaried worker’.

I thought most of VR works render a fantasy or Sci-Fi world after all. So, I intended to render the ‘everyday’ world with what only VR can realize. I was always thinking about it when creating this VR work.

In addition, the original concept was that viewers intruded into someone’s bedroom, so I  thought out the way that makes viewers feel a small discomfort or being told not to look at. Those who experienced for the first time may think ‘What on the earth is it?’, but I actually intended to give such a first impression.

— How did you make this VR work and how long did it take?

Dave Maggio: The only direction I set was to use ‘Salaried Worker’, so I started with making a character.

I already had the 3D model I made for the exhibition in April, but I wanted to modify it for VR. So I drew a rough idea on a sketchbook. This stage took about a day. Modelling the 3D character took just a few days because I started from the existing model. 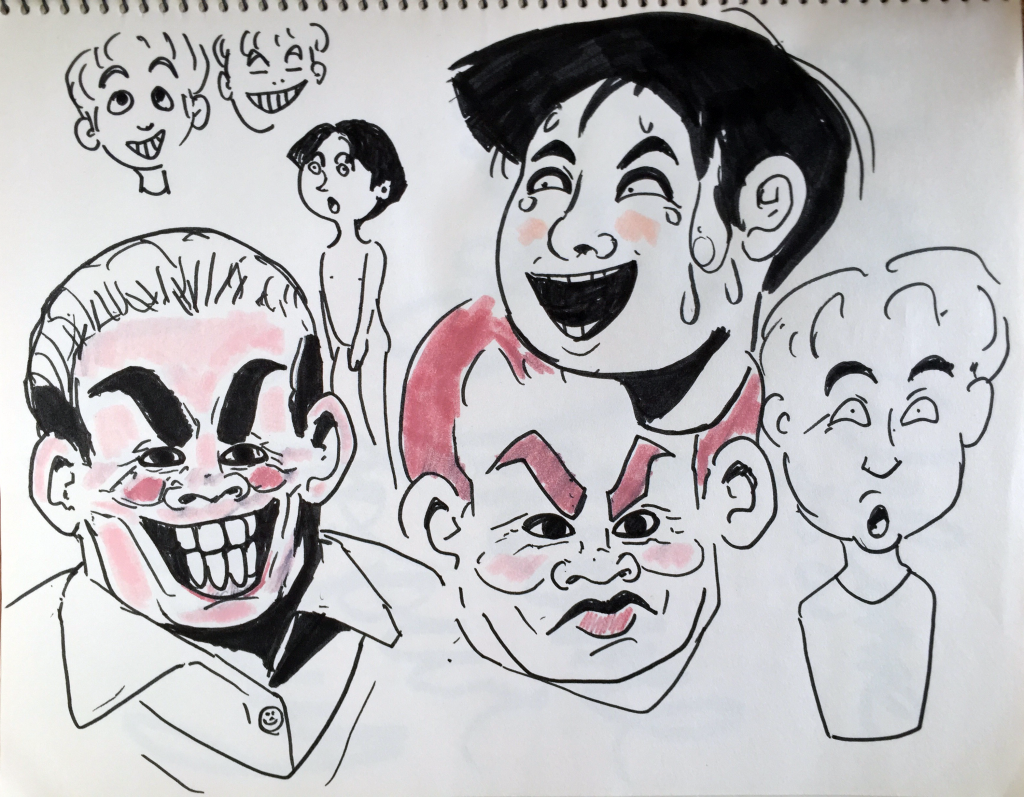 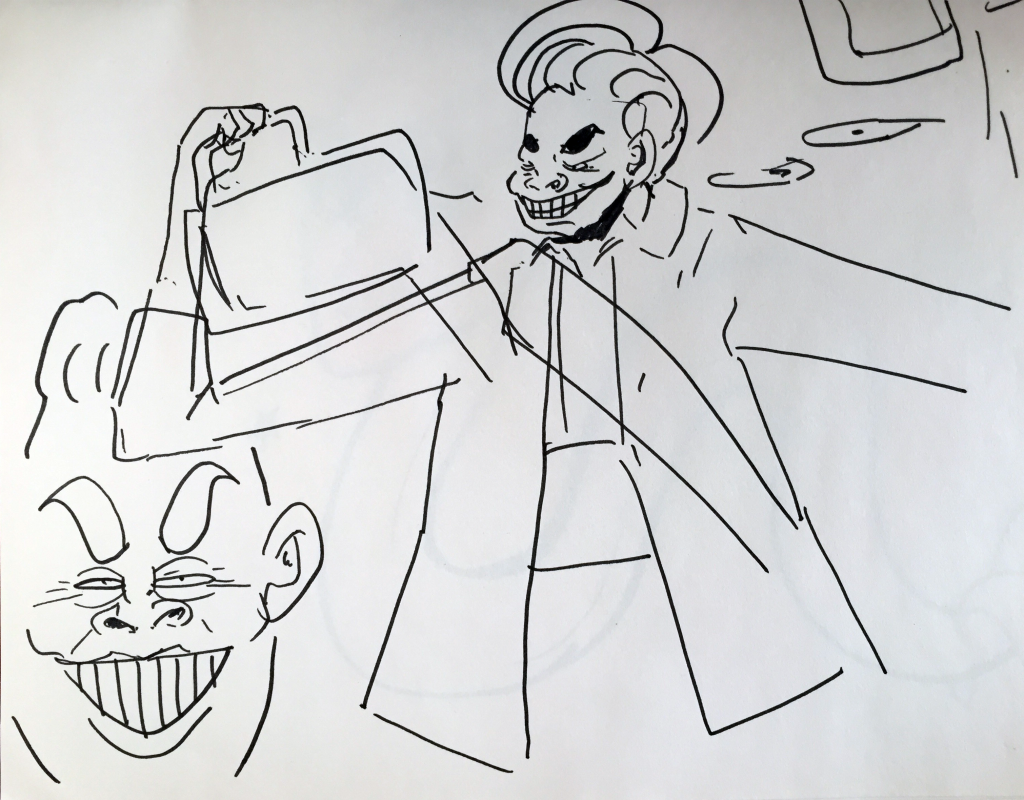 After adjusting the salaried-worker model, I started arranging the character model and other assets on STYLY. It took about two weeks because I wanted to try various ideas.

In fact, I planned to make a large town at first, but my ‘dream’ gradually shrank, becoming a compact one because the deadline was getting close in no time.

On the other hand, this limited time was the reason why I was determined to make a creative work as possible. As a result, it ended up with just one room, but I successfully created a VR work, which makes me feel that such a limited space is more interesting.

— Did you create the 3D models other than the character by yourself?

This time, I used Maya that I am at my best in for 3D creation (I want to study Blender, completely free software, for the next time).

I drew the textures with Photoshop and downloaded the animations from ‘Mixamo’, a motion-capture library. 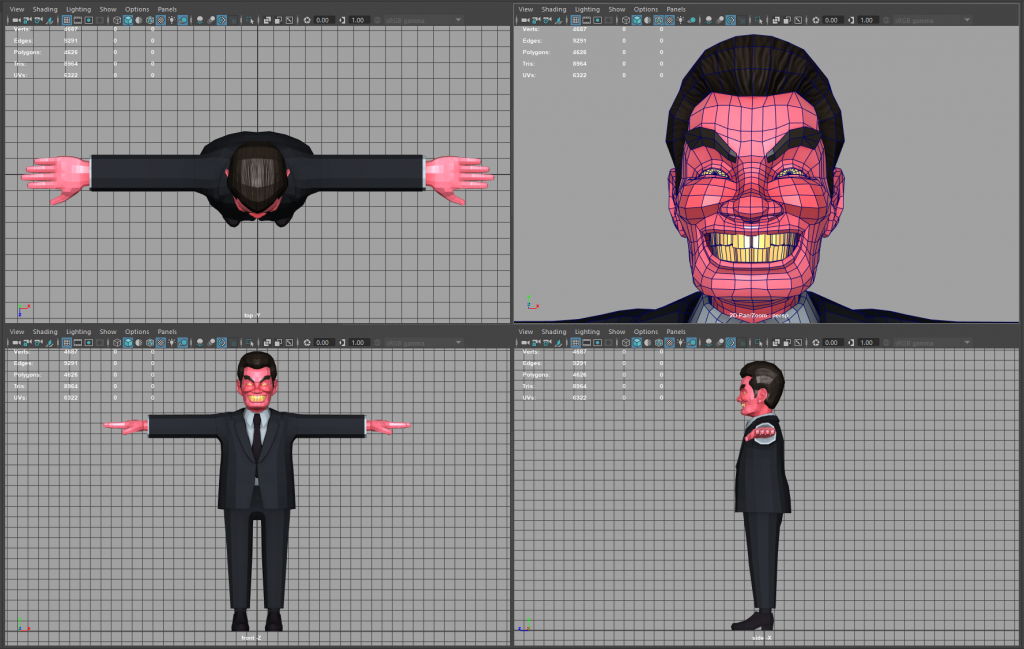 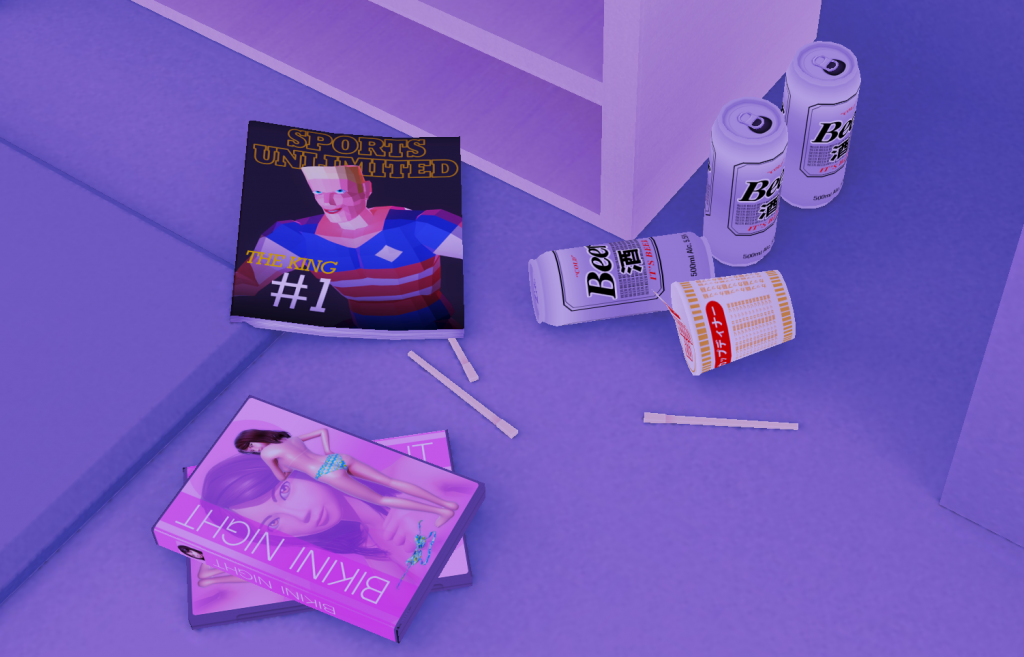 ‘SALARYLAND’ was mainly for the exhibition on the web, so I put all the models in the room together and drew them as one texture to reduce the data size.

Only for the ‘Salaried Worker’ character, I drew the dedicated texture and applied higher resolution than the furniture or the room.

Of course, I paid attention to the resolution of the other models. They were not created as low-polygon models, but, in order to limit the data size,  I cared about the number of polygons, increasing them where I wanted to emphasize while decreasing them where nobody sees very often. 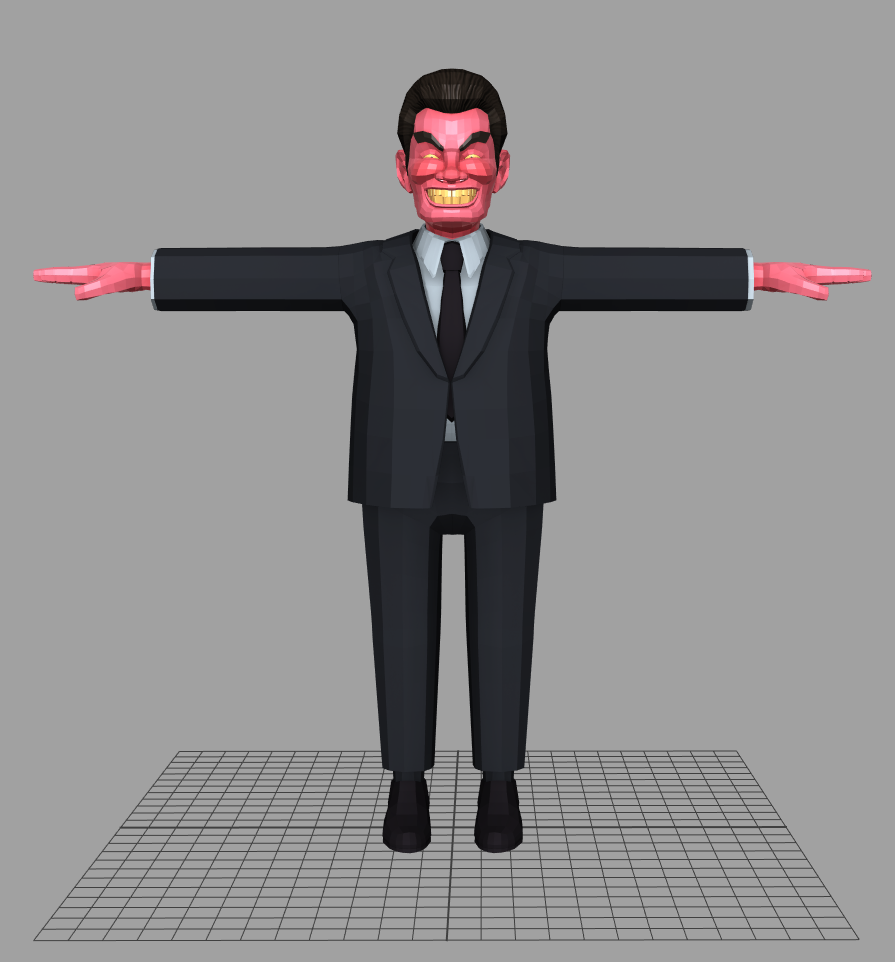 —  Thank you. What point did you care about in this VR work?

Dave Maggio: I think the advantage of VR is to give highly immersive experience, so I wanted to emphasize the feeling of ‘being in an unusual space’. VR makes people feel the scale of things very well, so I took a fair amount of time to adjust the size of the models and the layout.

I was also struggling to set the overall colouring. When creating ‘SALARYLAND’, Unity plug-in for STYLY didn’t work very well because my PC was old. Therefore, I did most of the tasks on STYLY, but I needed to draw the lighting as a texture after all because I couldn’t adjust the light well. The salaried worker in the room is drunk, so I wanted to apply an unpleasant colour; I coloured the room in purple-ish colour and apply an unnatural colour to his skin and eyes to match the room. 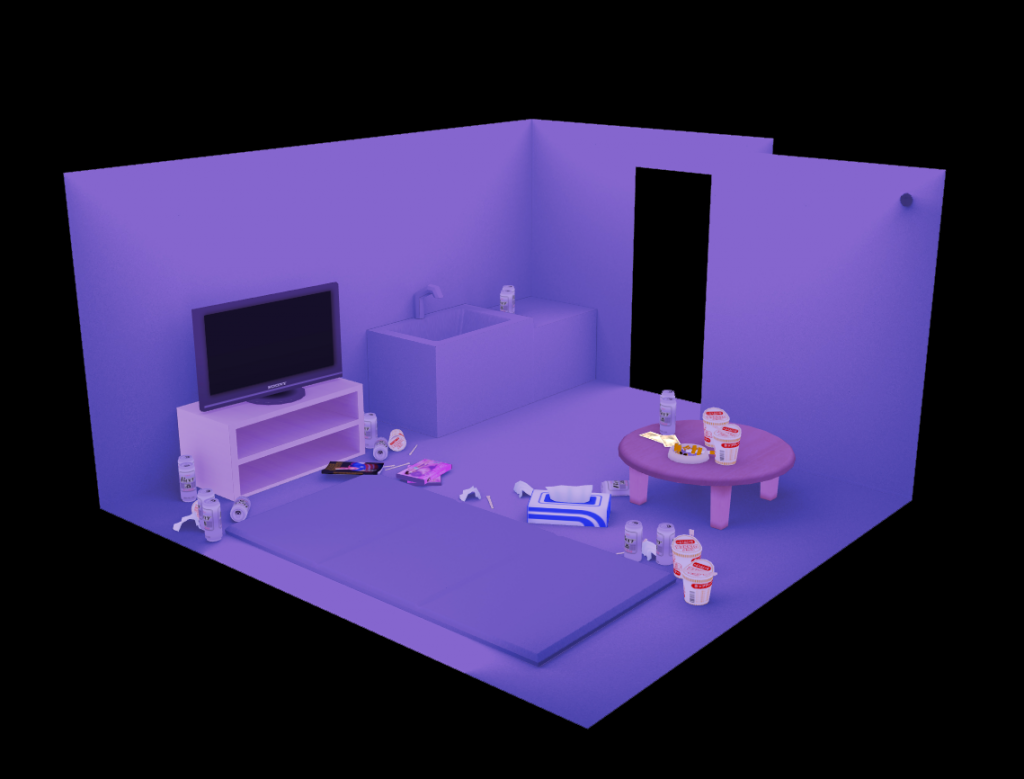 — Finally, could you tell about your future plan?

Dave Maggio: I recently bought a new PC, so I would like to release my works more while testing the software and the techniques I couldn’t use before. And, I would like to use the Unity plug-in properly when using STYLY again.

By the way, the advantage of 3DCG is that you can use it again and again once you created it. So, that ‘Salaried Worker’ might ‘go to work’ again for other projects. For now, I, as an artist, don’t want to repeat the same thing. I will try creating a VR work with more interactive features next time.

‘SALARYLAND’ was a VR space that stood out exceptionally. It was the work reconstructed as a new expression by optimizing the 3D model for VR, which was originally created for a web site.

In NEWVIEW AWARDS, there were a lot of the entries of VR content that was created in a similar way.

The artistic world and data realized in 2D can be reconstructed for 3D space. People think VR is difficult to create because of some challenging tasks such as creating the 3D models from scratch. However, in fact, VR is a media that can create a new expression simply by combining the existing data.

Inspired by this example, I hope a lot of artists step in VR and try designing a totally new VR space.