This article reviews the work “maintenance”, which won the Best Player Award in the NEWVIEW CYPHER 2020 #Graphic category.

We will read about “maintenance” while referring to Yuzuki’s past works.

Asada has been using 3DCG to create figurative works of avatar fashion.

Beginning with an exploration of virtual fashion using MarvelousDesigner to express the relationship between avatars (body) and clothing (media).

Avatars and clothes are also key words in reading this maintenance.

Asada mainly works with avatars and clothes modeled and designed in 3DCG, but in the past she has used Photogrammetry to create works that incorporate real people and clothes into 3DCG.

This is a wonderful piece of work that has the qualities of art while maintaining the quality of design.

While thinking about Asada’s idea of avatars and clothes based on her past works, we will read about her VR work “maintenance”, which exists as an extension of them.

When the scene starts, you see a white hori studio-like wall, a human object that keeps turning against the wall, and the word “maintenance” on the screen. 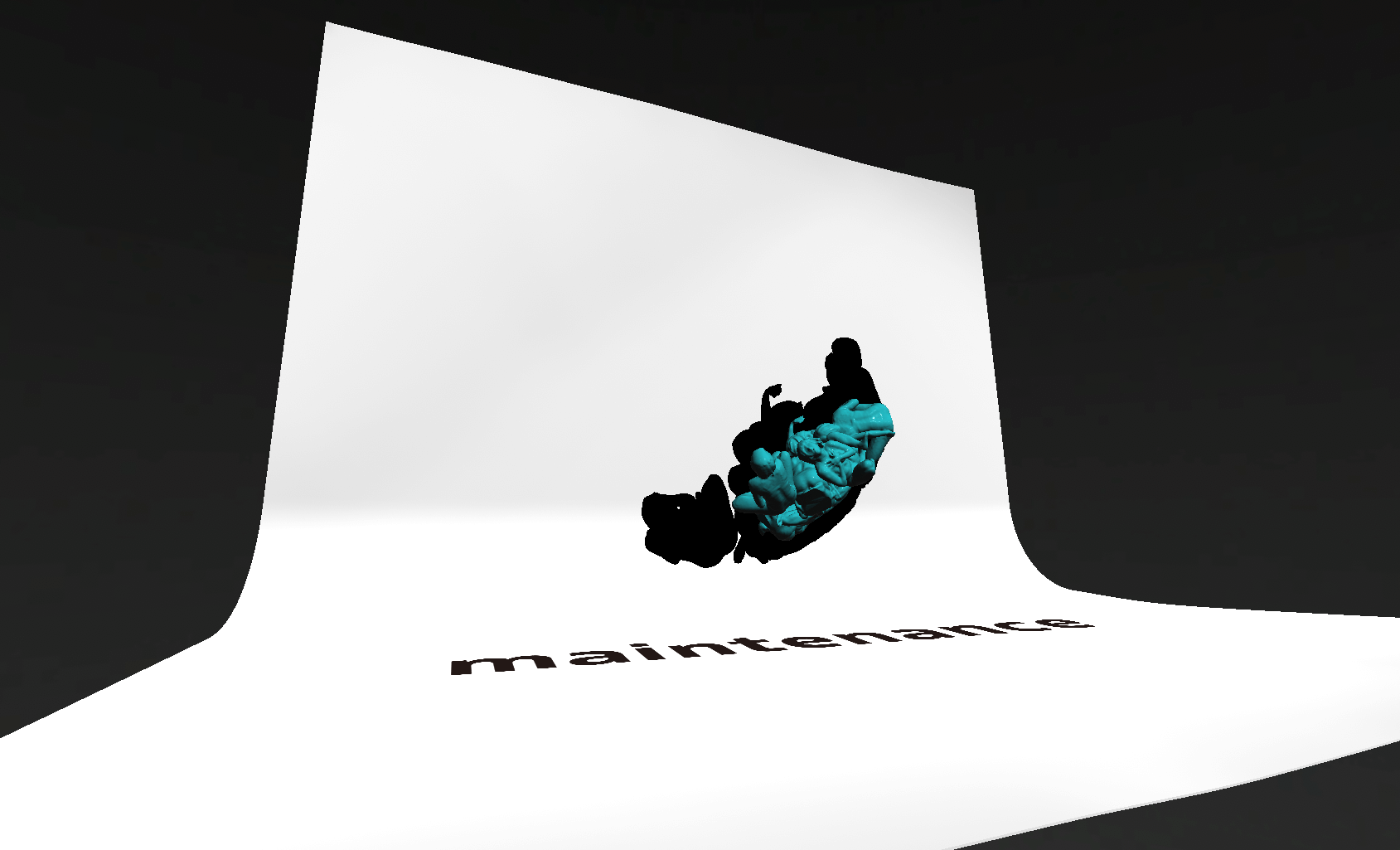 The object, which is constantly rotating, continues to move irregularly under the influence of gravity. Its movement is heterogeneous and gives us a strange impression.

The human objects, which have taken on a heterogeneity due to the movement of gravity, retain the shape of a person, but are transformed into other objects that do not have the characteristics of a person.

You can enjoy this scene by reading the nature of the transformed objects and their background.

The artist describes this work as follows 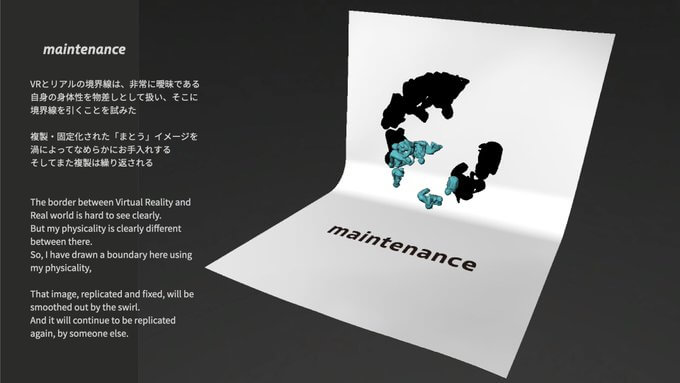 The Border between Virtual Reality and real world is hard to see clearly. But my physicality is clearly different between there. So, I have drawn a boundary has using my physicality. That image, replicated and fixed, will be smoothed out by the swirl. And it will continue to be replicated again, by someone else.

The physicality in this work is the human object in the work. If we refer to the text, we can assume that this object is Asada Yuzuki herself.

The act of drawing the boundary between VR and reality with this physicality is probably inherent in the maintenance of this object of herself.

To begin with, what can we think of this “maintenance” as?

Ms. Asada has posted a video of a “washing machine” on Instagram with the word “maintenance”.

In other words, “maintenance” is the act of taking care of clothes, like washing them.

The clothes in this VR are Yuzuki’s objects. This object is a human being, but it has the characteristics of “clothes”.

Also, in the past, Ms. Yuzuki mentioned the relationship between avatars and clothes as follows

In other words, an avatar in VR is both a body and a garment.

This is a peculiarity of the VR space, and at the same time, it is an idea that extends the media nature of clothing.

Yuzuki’s objects in this work are Yuzuki herself, her avatar, and her clothes. I read that the act of caring for the object clarifies the virtual existence of Yuki using her real physicality.

In VR, the avatar, which is a duplicate of oneself, is sublimated into a concept that one wears while being oneself.

Each action surrounding the body and clothing, such as plastic surgery, makeup, and clothing choices, can be considered an extension of ourselves and the media of fashion and the body.

By observing the outside, we are confronted with the idea of where our insides are and what they are in the first place.

By comparing the real us and the VR us, we may observe a new “us”.

From the perspective of avatars and clothes, I felt that the act of asking questions about the existence of VR and the real, and reading those questions, enhanced the depth of my appreciation of this work.

If you take the time to look at this work from other perspectives, you may find something new. 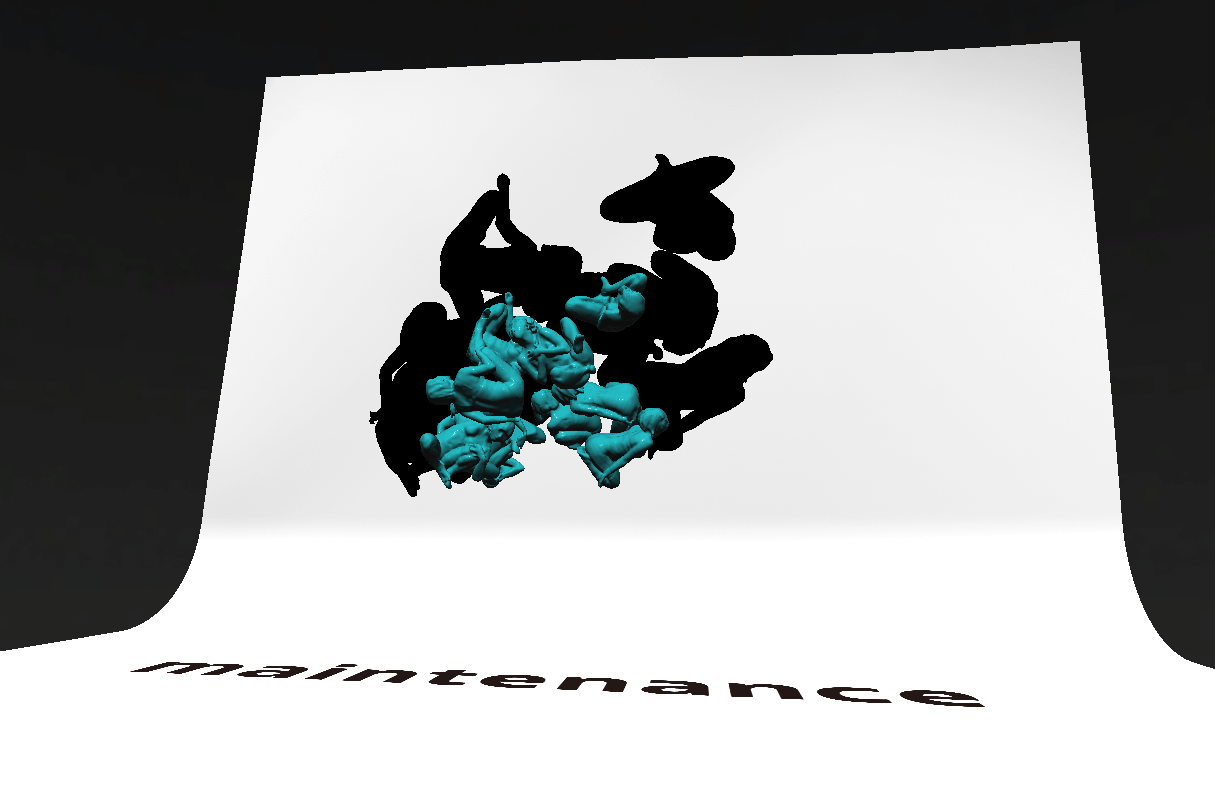