The 23-year-old confession was a finalist work for the NEWVIEW AWARDS 2019.

The work deals with sexuality and sublimates its representation as a chaotic psychedelic figurative VR work.

I would like to introduce the artist, WON, and read about this work. 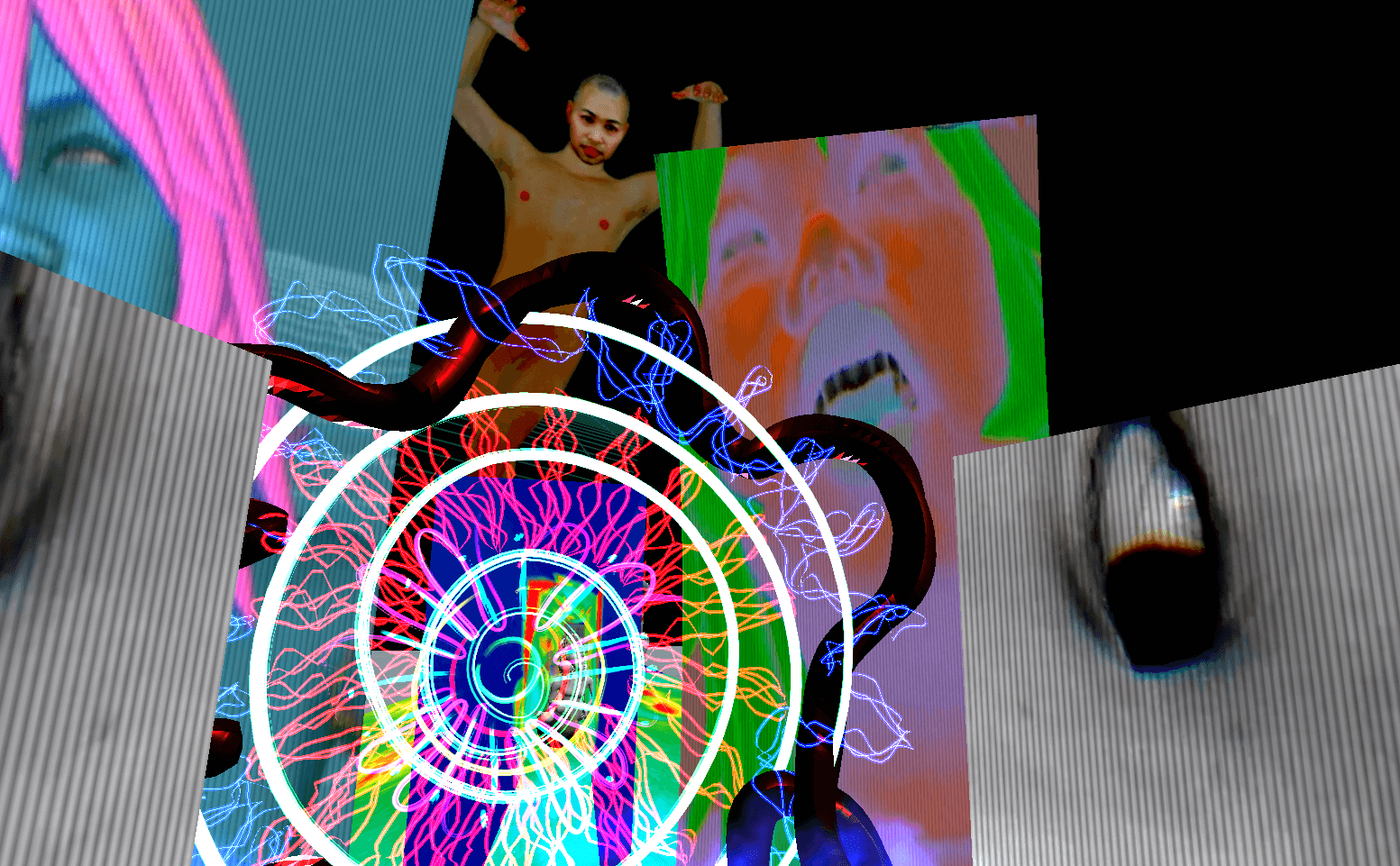 WON HOI IAN is a Taiwan-based artist who creates graphic and video works with a focus on 3DCG, as well as works with a sculptural approach. 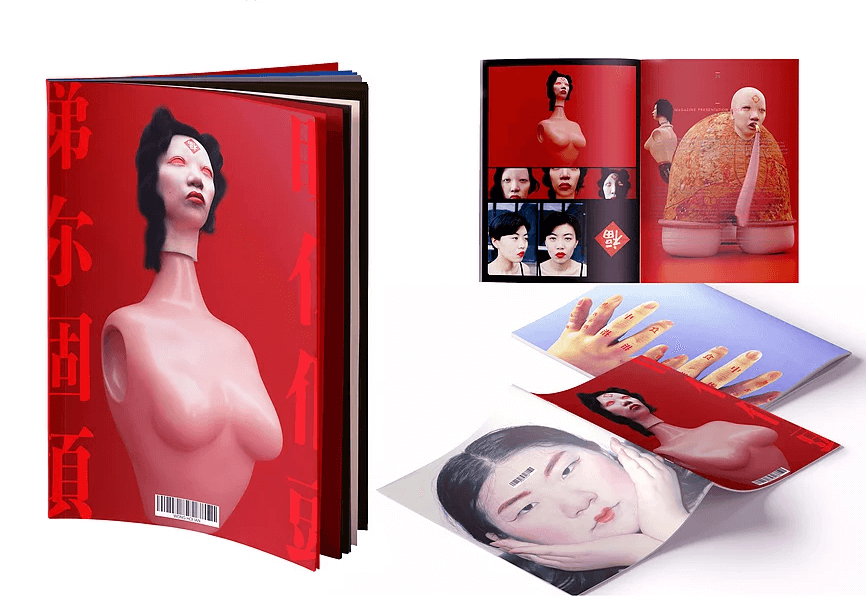 WON considers the human body as a “medium” and sublimates the “sexuality” and “sensitivity” expressed in it as art.

His works are figurative with 3DCG objects, yet they have a certain luster and eeriness. 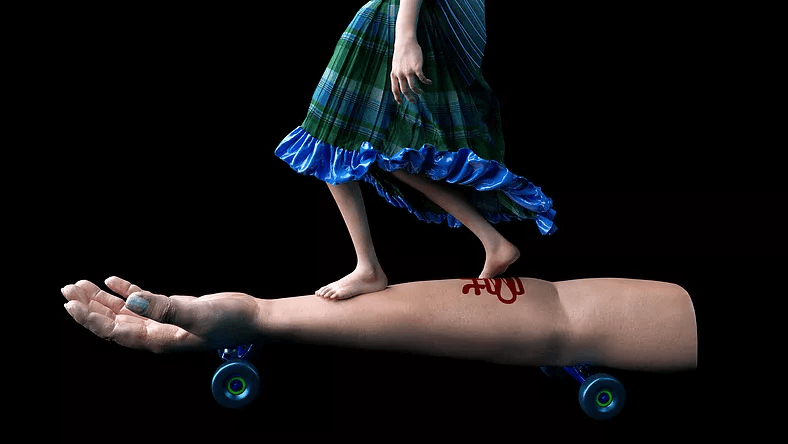 In addition to 3DCG, many of the works in photography also deal with the body and human beings. 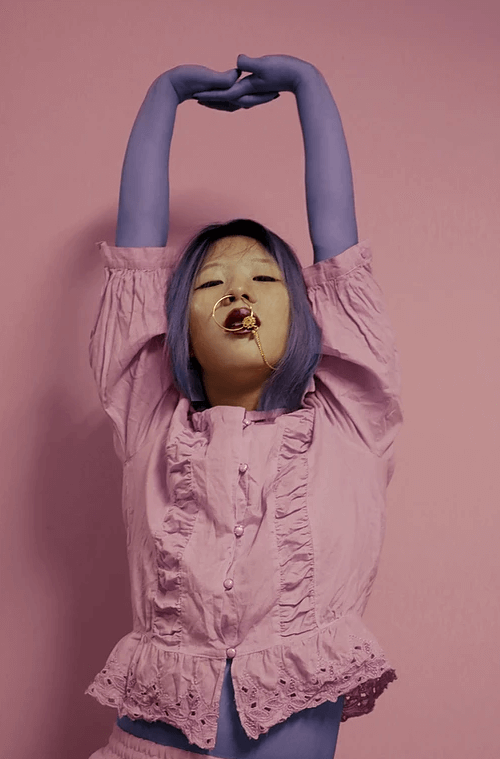 In the field of photography, many of my works are for apparel and fashion brands.

Through art direction, we can sense from his works that he is approaching fashion, the body, and the fundamental realm of human expression.

We will read about WON’s art/creation expressed through VR.

About “The 23-year-old confession”

When this work begins, the player is placed in a space with chaotic images and objects. 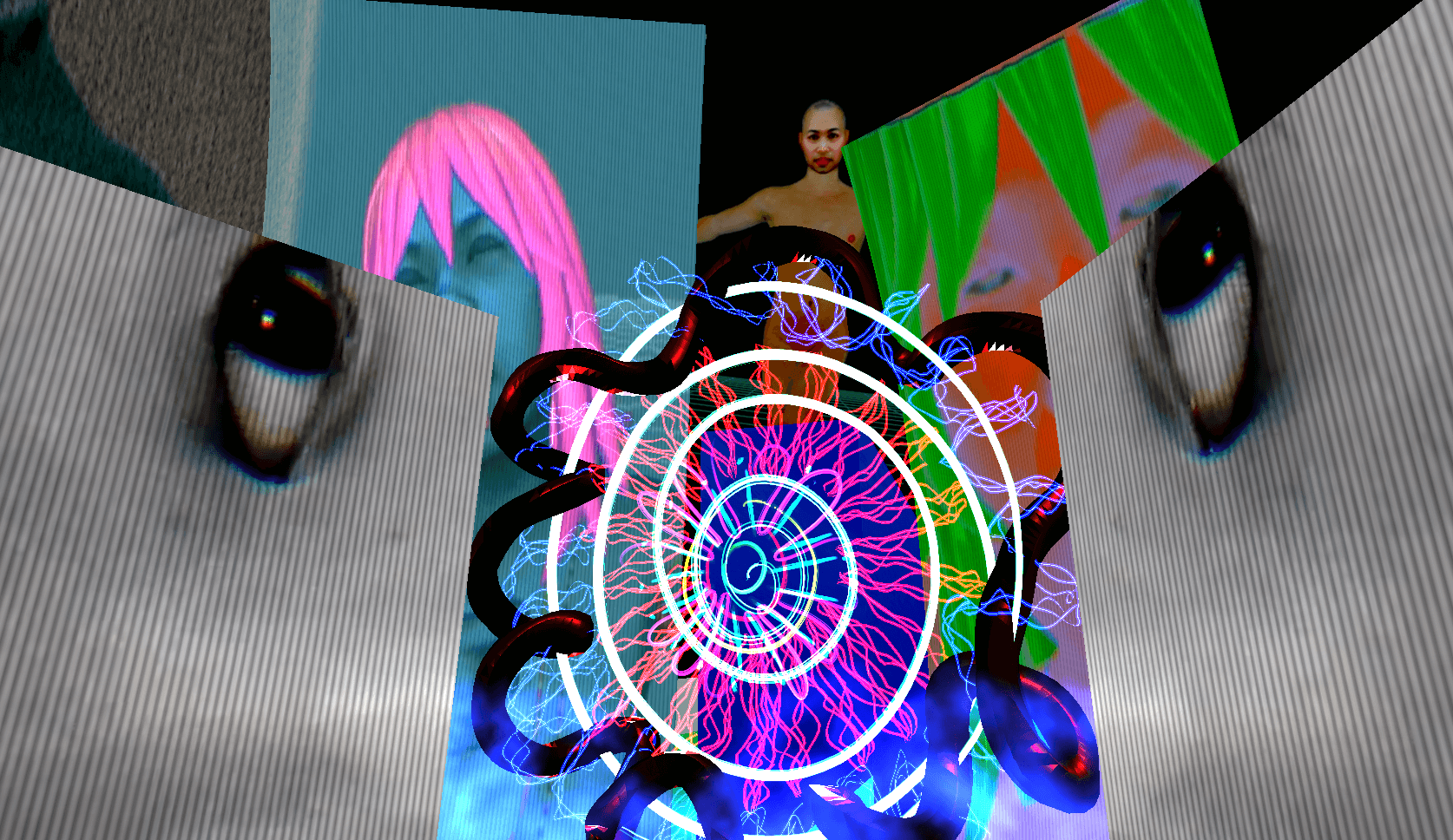 An image of eyes scurrying around, looking as if they are worried about something. An image of a person who seems to be sticking out his tongue or shouting like a madman.

At the top center is a naked person.

As if to leave us behind, the space is filled with tons of information, standing in front of us as if to make us abandon our understanding.

Going straight through the space, we enter a tunnel-like area with a texture of a human face in thermographic coloring. 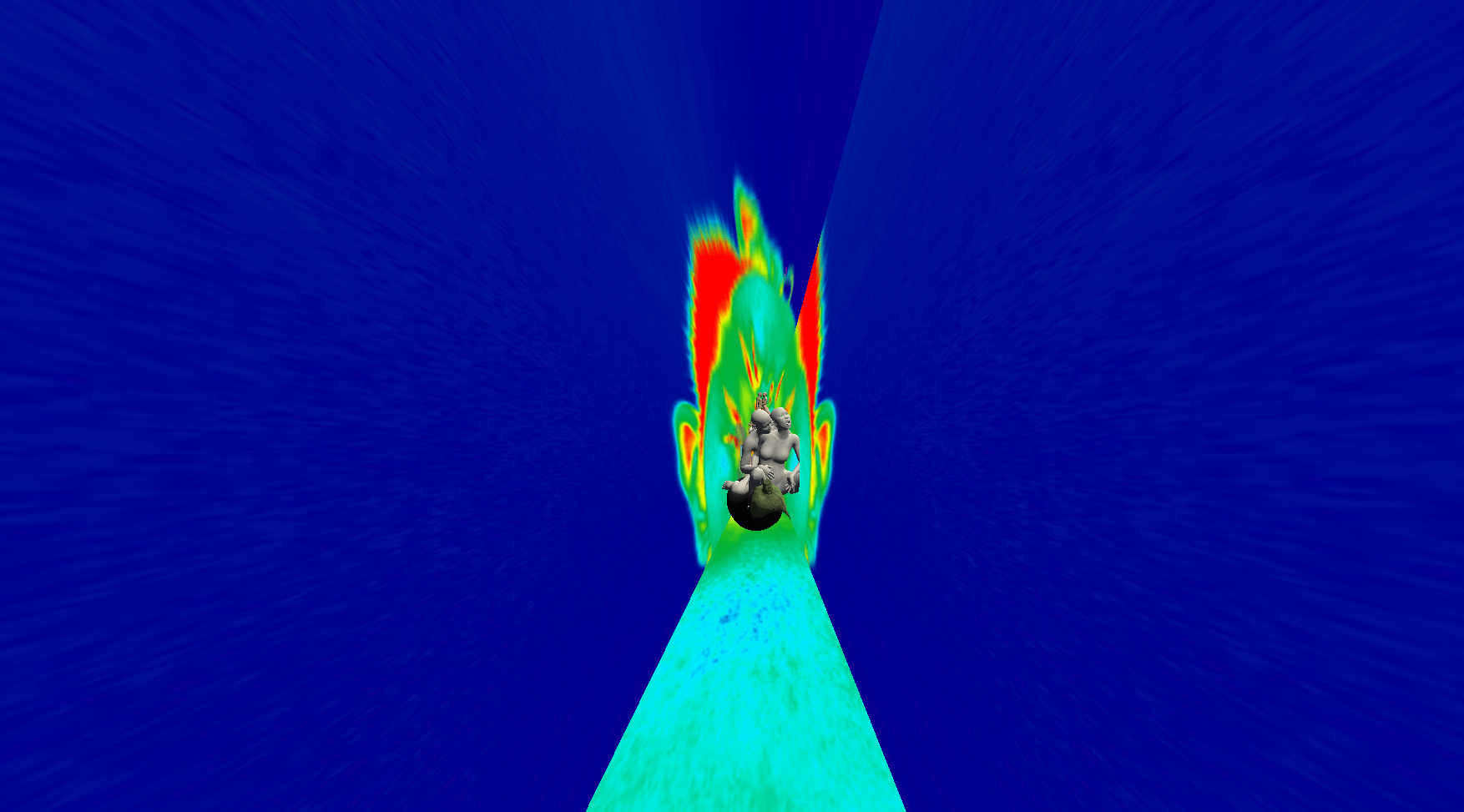 In the tunnel, 3DCGs are placed as if a man and a woman are engaged in a sexual act. 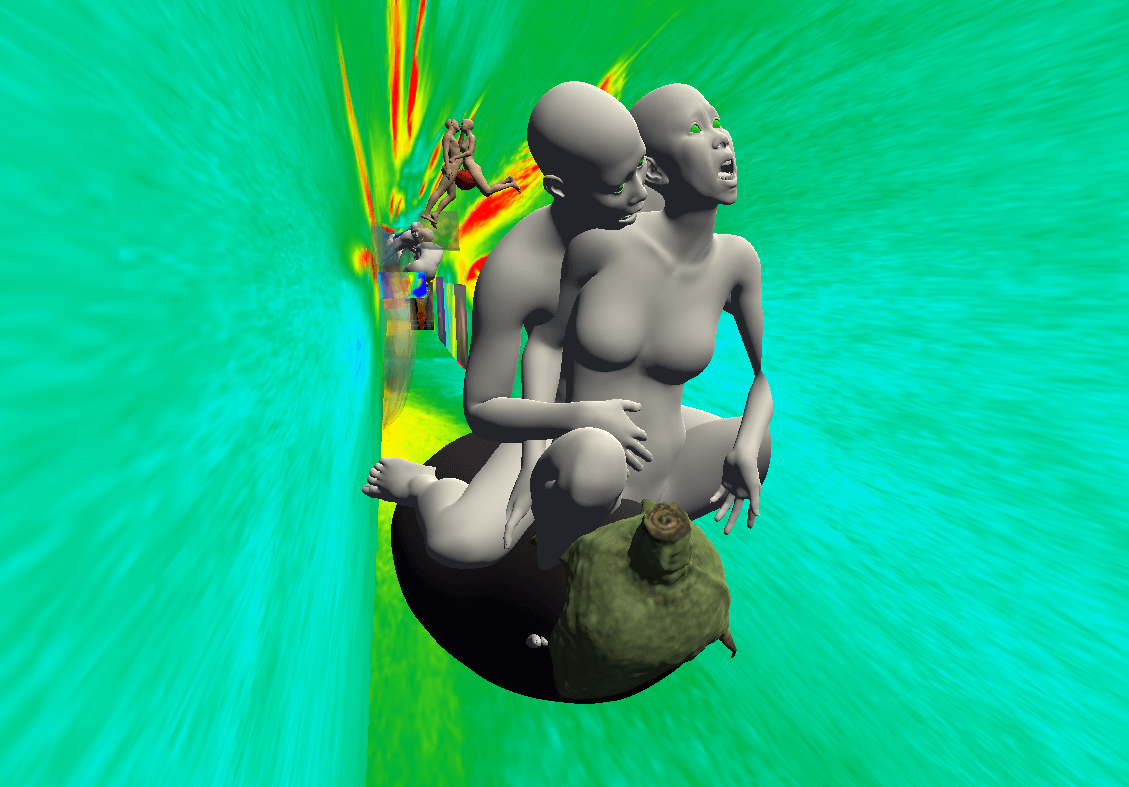 In addition to the 3DCG, 2D graphics are also placed. 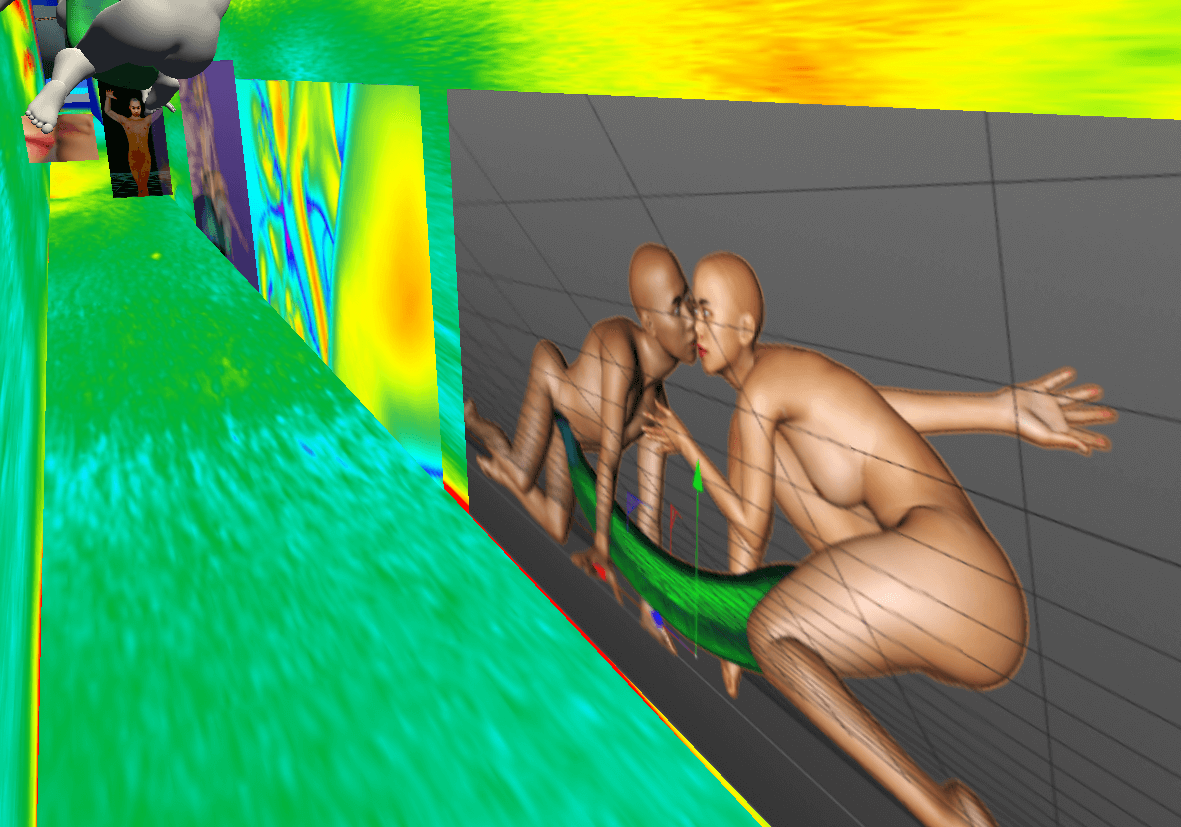 At the very end, there is a graphic of a naked person who was also at the entrance. This person does not have a partner.

And if you look closely, you can see that his body is a bit unnatural. 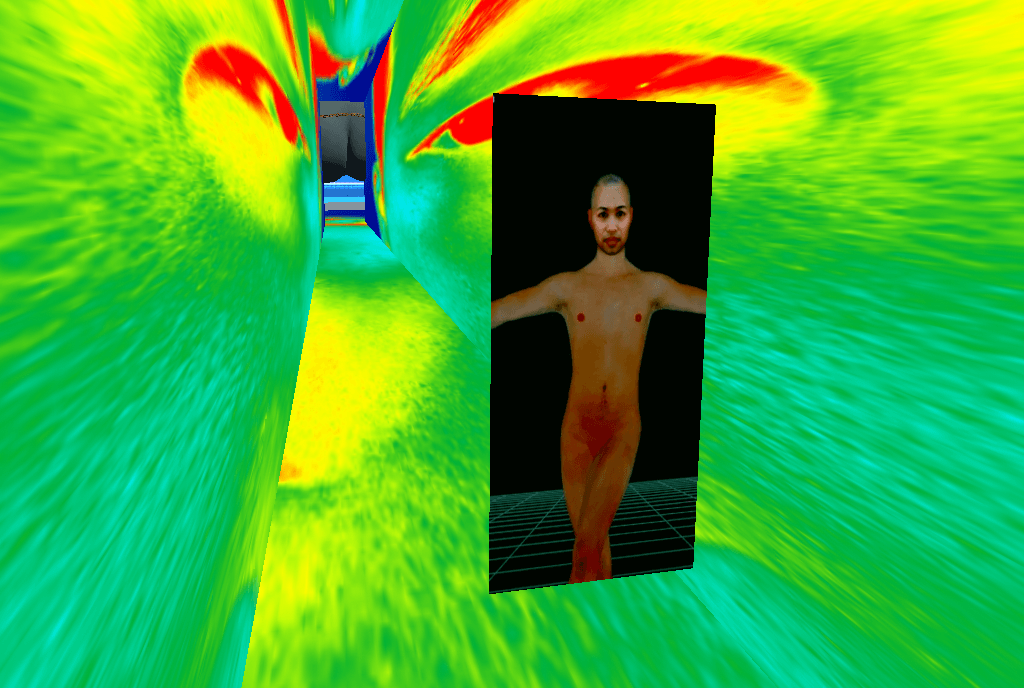 This person’s body and frame look male, but he has no male genitalia. Is it really a man? Or is it a woman?

And who on earth is this person?

After exiting the tunnel, we found ourselves in a space that was beyond our understanding.

There are moving airplanes, images of the red ocean, and a woman with an eerie face with her mouth open. 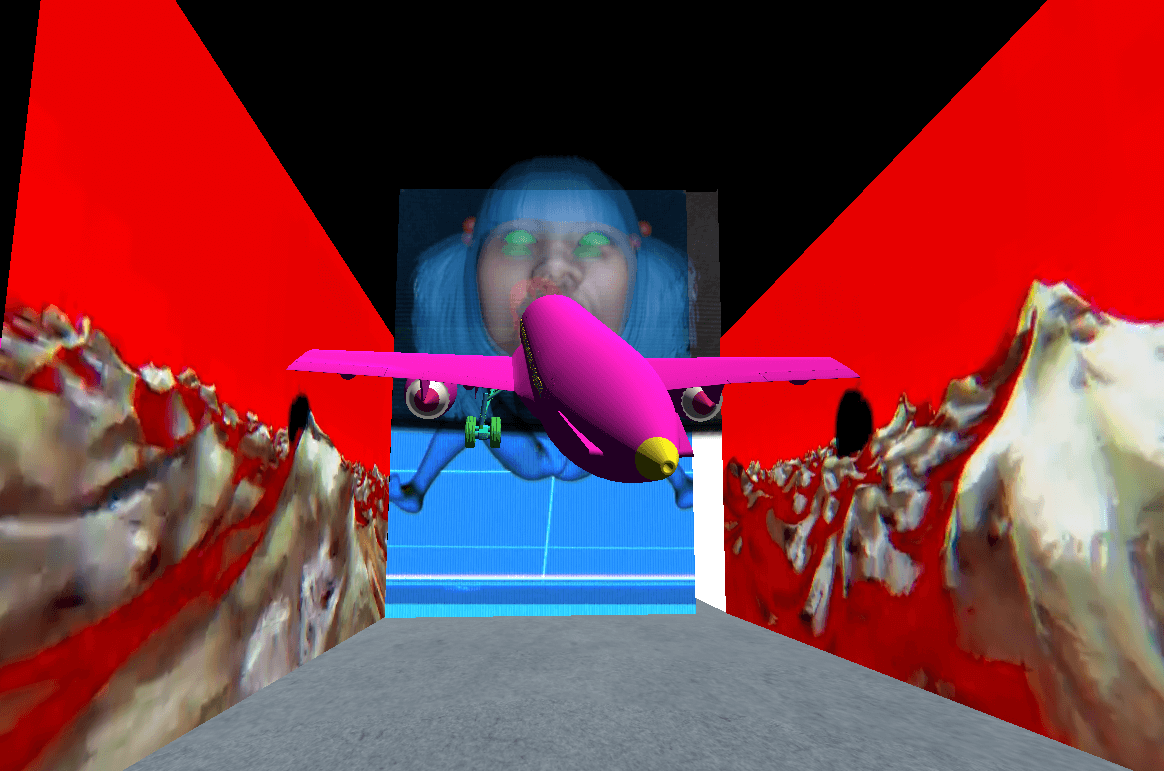 Throughout the work, the objects are arranged in a chaotic way, with a theme of sexuality, and I felt that the work was very delicate, while being eerie and psychedelic at the same time.

The artist describes the work as follows.

What this work represents is the artist’s confused imagination about sex.

It could be the conflicting feelings of being interested in sex but afraid to face it, or the shock and stimulation after dating someone else.

The producer’s idea of VR is to create one’s own eternity, and through VR that records memories of a certain period of time or the space of a specific moment, the viewer can go back to a past time and recall those memories.

The filmmakers also aim to allow the audience to feel psychological emotions such as curiosity (which the filmmakers feel because they were born in a traditional family) and fear of sex. Through this film, the audience will be able to recall the memory of facing sex for the first time, the confusion and anxiety in their minds.

At the end of the piece, we return to the simplest of scenes, which is a kind of respite in this chaotic imagination.

As the title suggests, this work relives through VR the confusion that the author, WON, felt when he confronted others through his sexuality at the age of 23.

The negative emotions that we felt, such as creepiness and fear, are directly from WON’s work.

At the same time, it can also be read as depicting not only eeriness and fear, but also positive expressions such as interest and curiosity.

It can also be associated with the media nature of VR.

If the work is only about creepiness and fear, it is considered passive and intrusive.
When we enter a VR space, we think of the fear as a looming experience that prevents us from moving and makes us stand there. Horror movies are a good example of this.

This work, however, has an entrance and an exit, with a tunnel in between, and we experience the work spatially by moving physically and actively. In order to appreciate a work of art, you have to immerse yourself in it.

In other words, the act of active viewing in VR is an act of expressing “interest” or “curiosity,” and can be read as media.

It is a work that does not confront us with fear, but allows us to experience the interest and curiosity that lies beyond it with physicality. 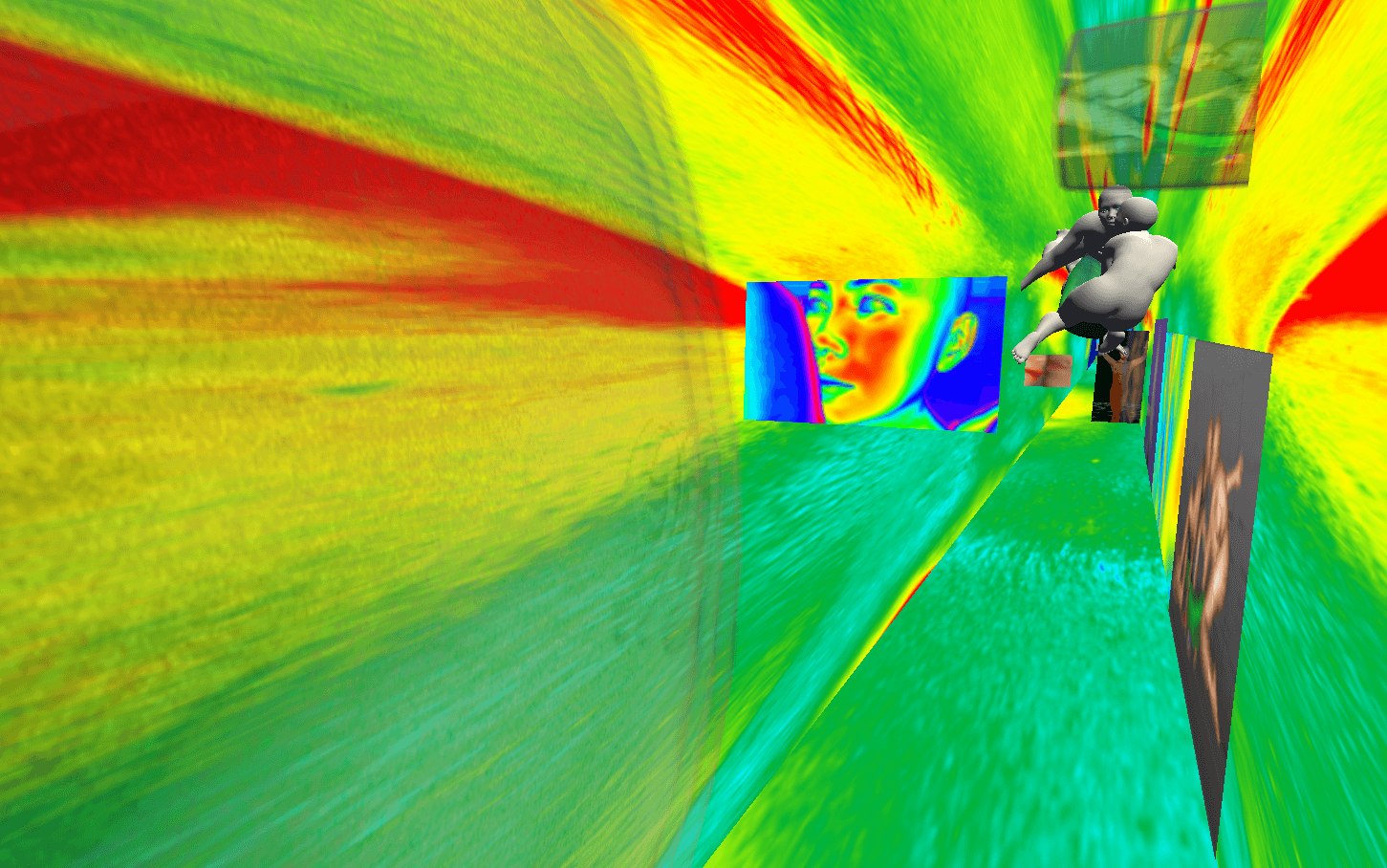 In many of WON’s artworks, the body is used as a medium to represent the parts of our mind.

Through VR, we can see that this work has a structure that allows us to actively, rather than passively, experience that part of our mind.

The part that left a strong impression on me regarding physicality and sexuality was the exit.

In the exit area, there is a 3DCG of a woman, and the exit is located in the same area as the female genitalia.

And the airplane moving violently toward it is probably a representation of male genitalia. 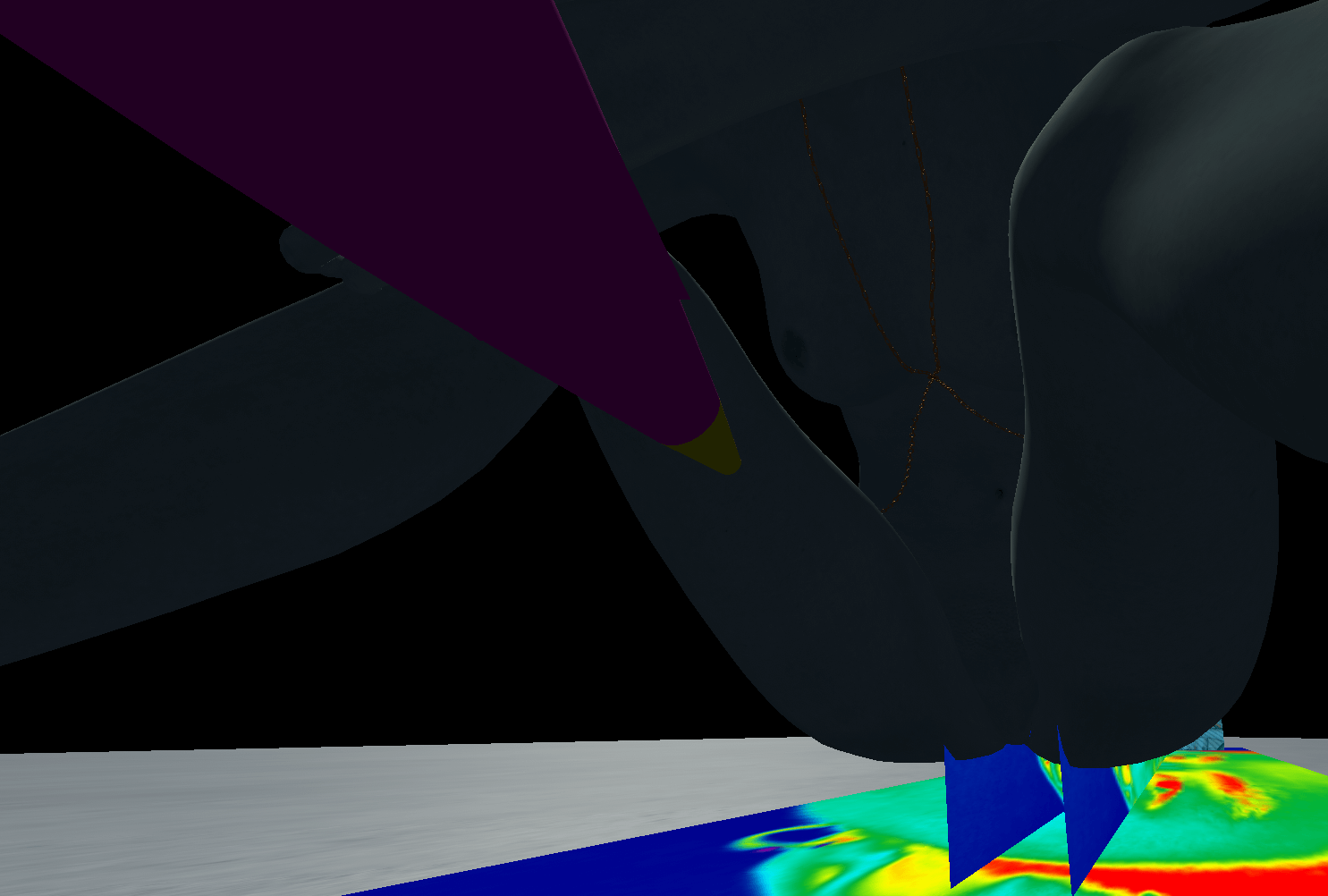 When we step out of the exit, we may be a little frightened by the movement and discomfort of the huge airplane. This represents a negative sensation as opposed to the positive sensation of moving through space (curiosity and interest).

The total experience can be read as “reliving WON’s sexuality and sensation.

I viewed this work through the media approach of VR. However, there are many different symbols scattered throughout this work.

The depth of the work will increase with repeated viewings to see how you can decipher its expressions.

We hope you enjoy the experience. 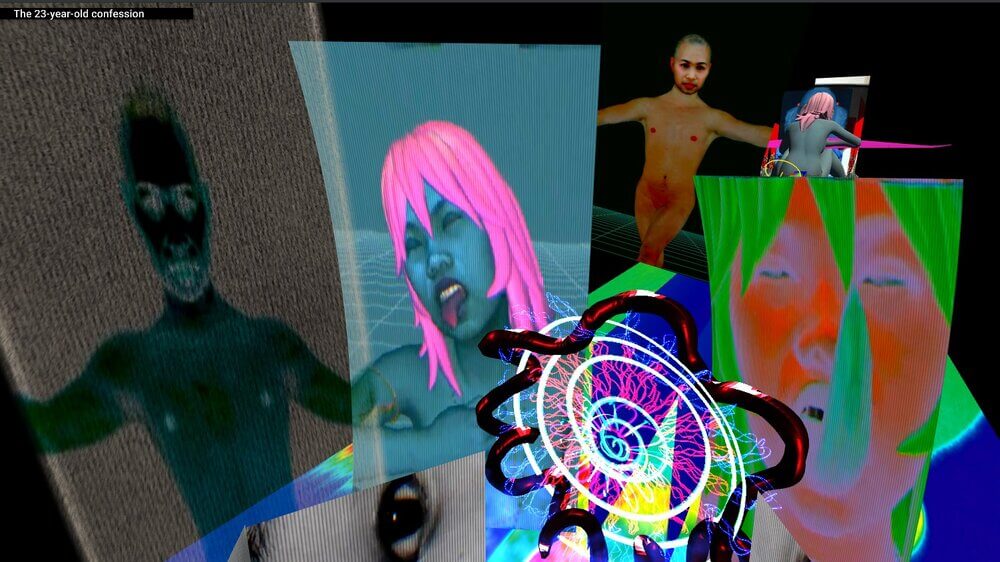 NEWVIEW SCHOOL ONLINE is now open, an online learning site where you can learn the basics of Unity and PlayMaker required for VR/AR content creation, as well as the process of creating the attractive content distributed on STYLY (production techniques will also be disclosed).