In this article, I review the self-titled work “LEPER” by artist “LEPER” who participated in NEWVIEW CYPHER 2021.

NEWVIEW CYPHER is a project in which artists and creators active outside of XR activities use STYLY to create XR.

Twelve artists and creators are participating in the project, and we will be featuring reviews of their scenes in Pick Up Scene.

This time it’s the work of artist LEPER. 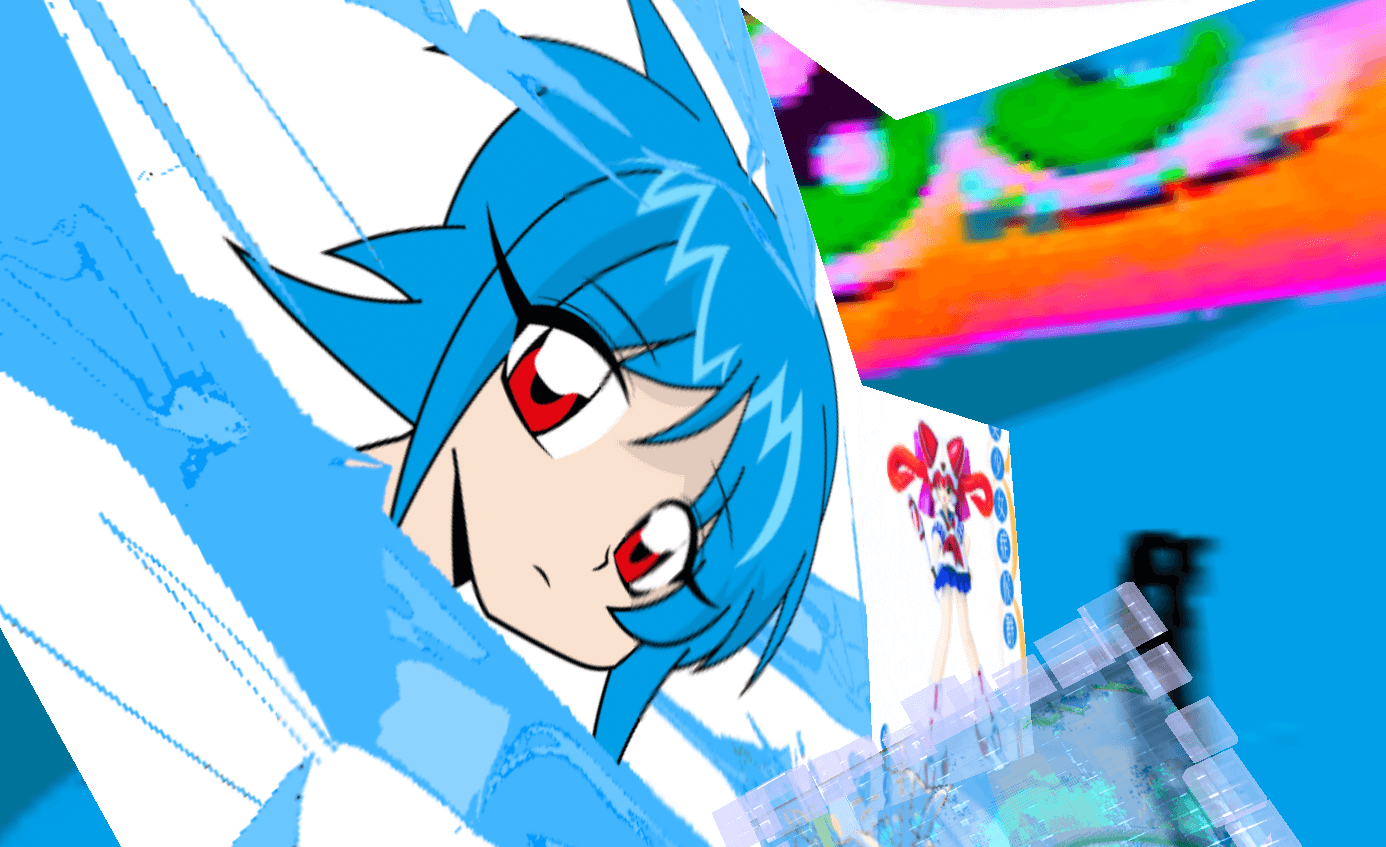 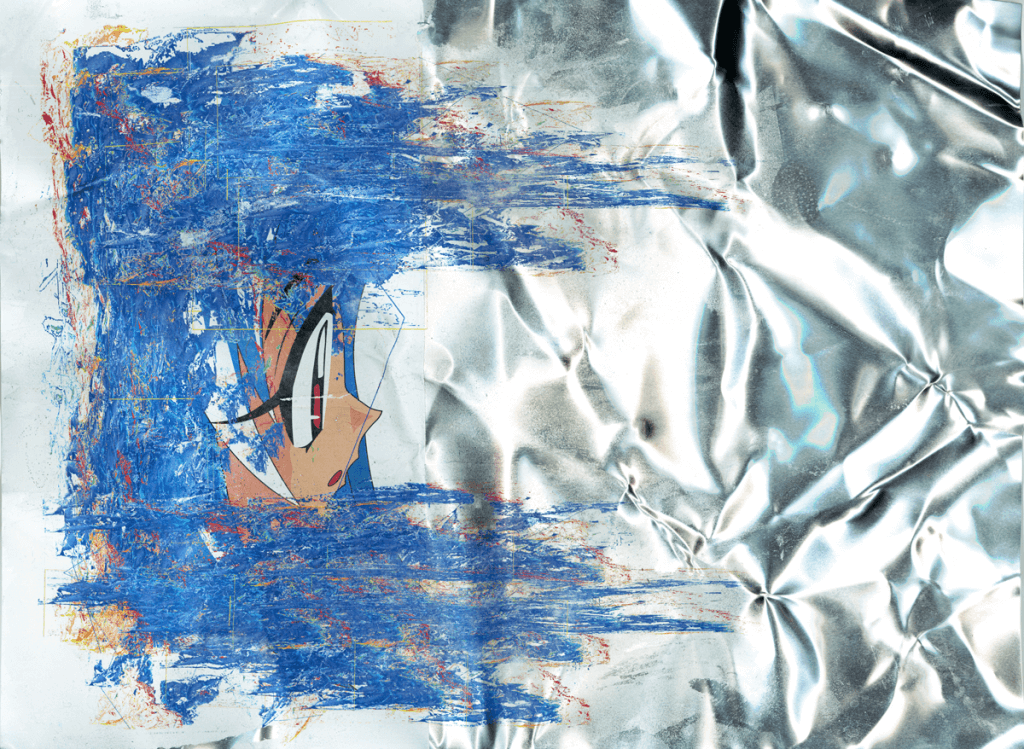 Her works are made of cardboard and aluminum using transfer technology.
Influenced by the 1990’s anime she watched as a child, she deconstructs the images of beautiful girls and uses solvents to create visuals that look as if bugs are occurring.
Since ethanol is not available at the Corona disaster, she uses sake and mouthwash to transfer the images.

Past activities include creating the artwork for the compilation album “? which was released by the internet label “Maltine Records”. 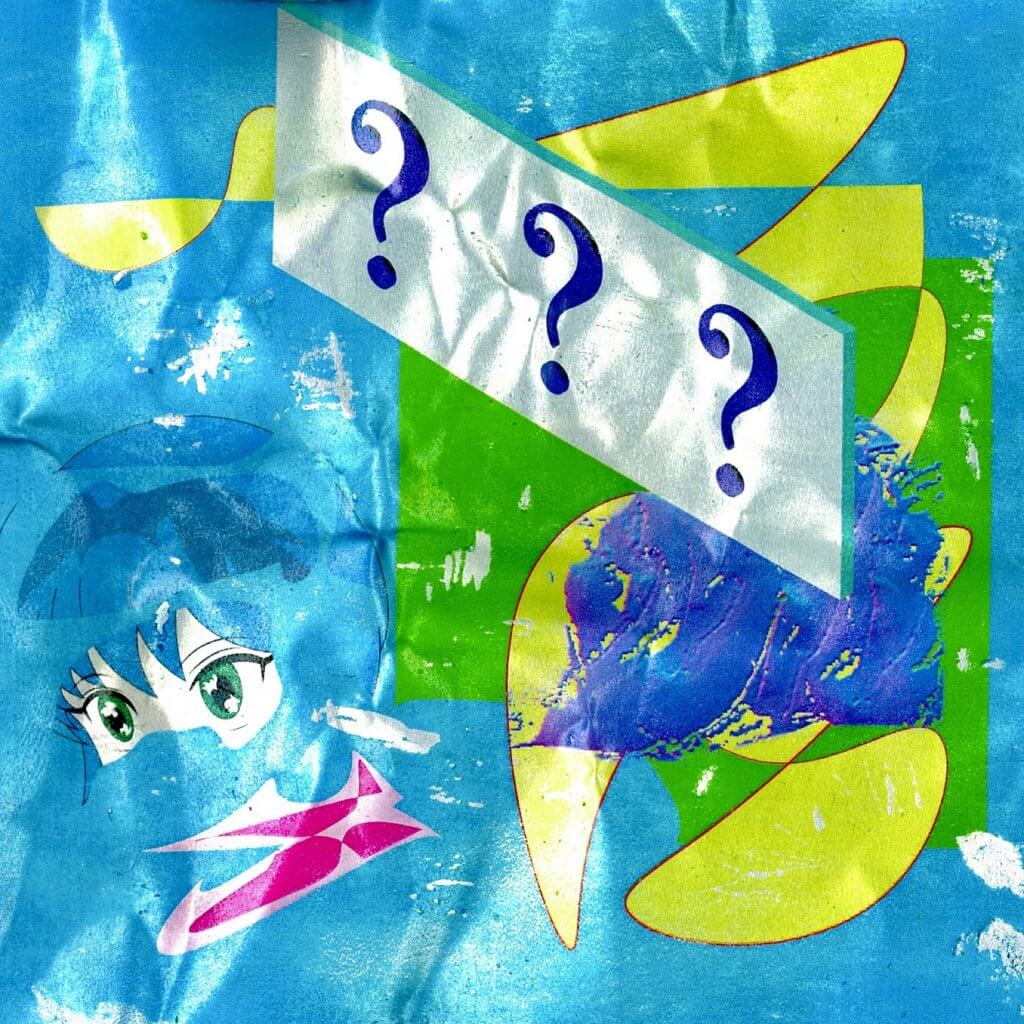 When you launch the work, you will see a space in front of you where anime characters and images of LEPER’s works are chaotically arranged. 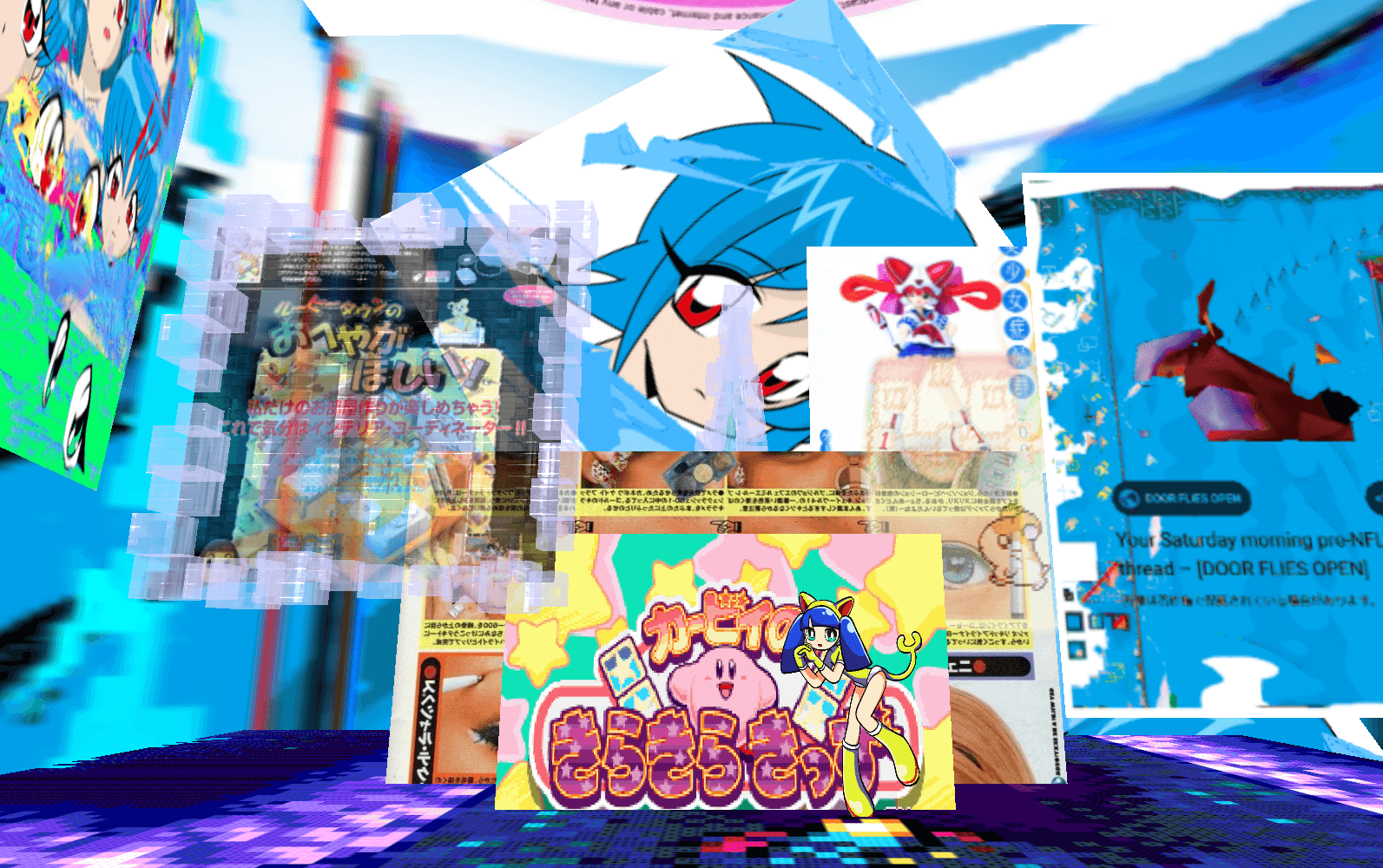 In addition to GIFs of nationally popular game and anime characters, clippings from gal fashion magazines from the 2000s are arranged here. 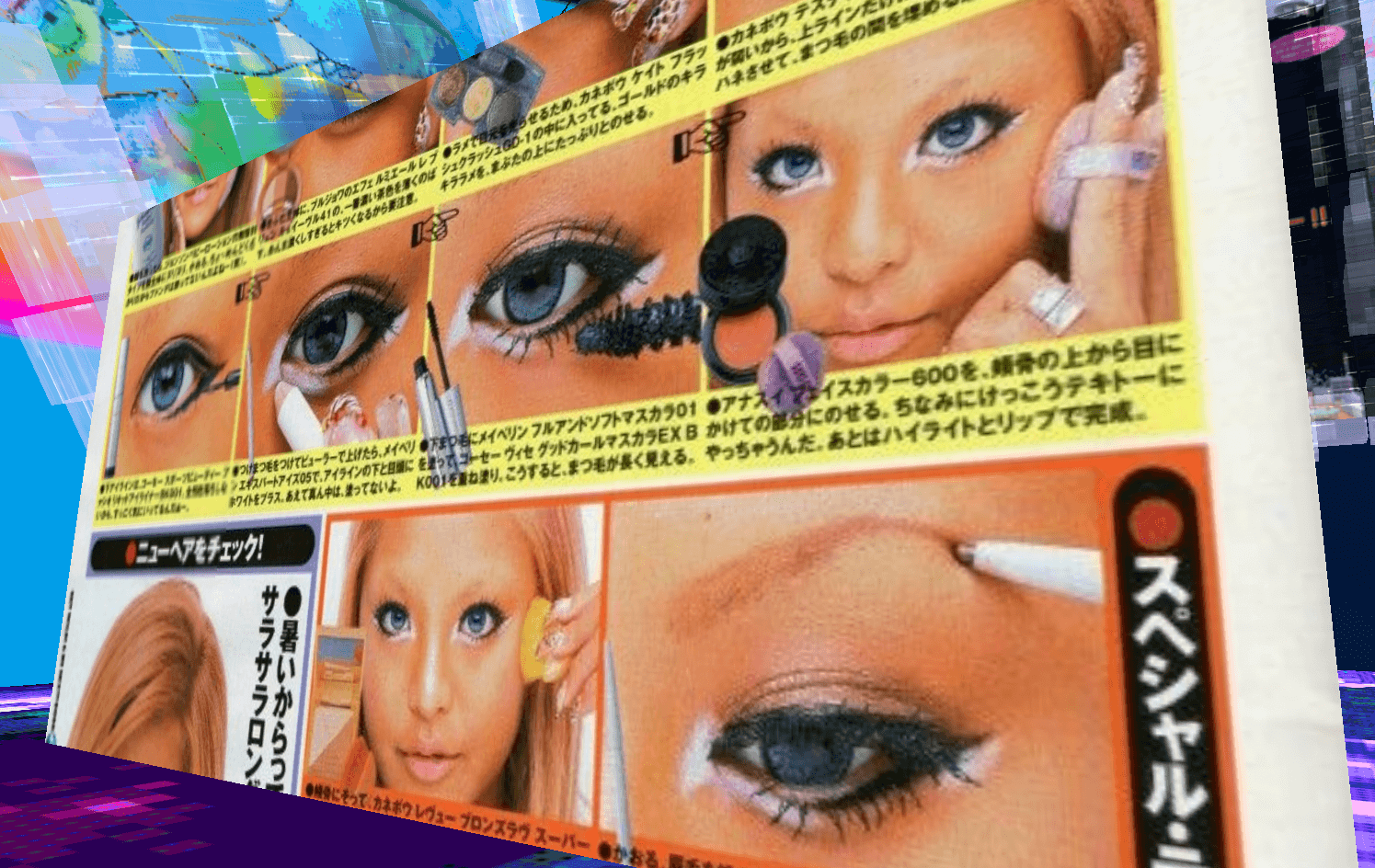 It’s a tasteful choice that makes her want to ask herself why, but it doesn’t stop there.

There are also images of the software “Ichitaro Smile,” which most people between the ages of 25 and 30 have probably touched at least once in elementary school in Japan. 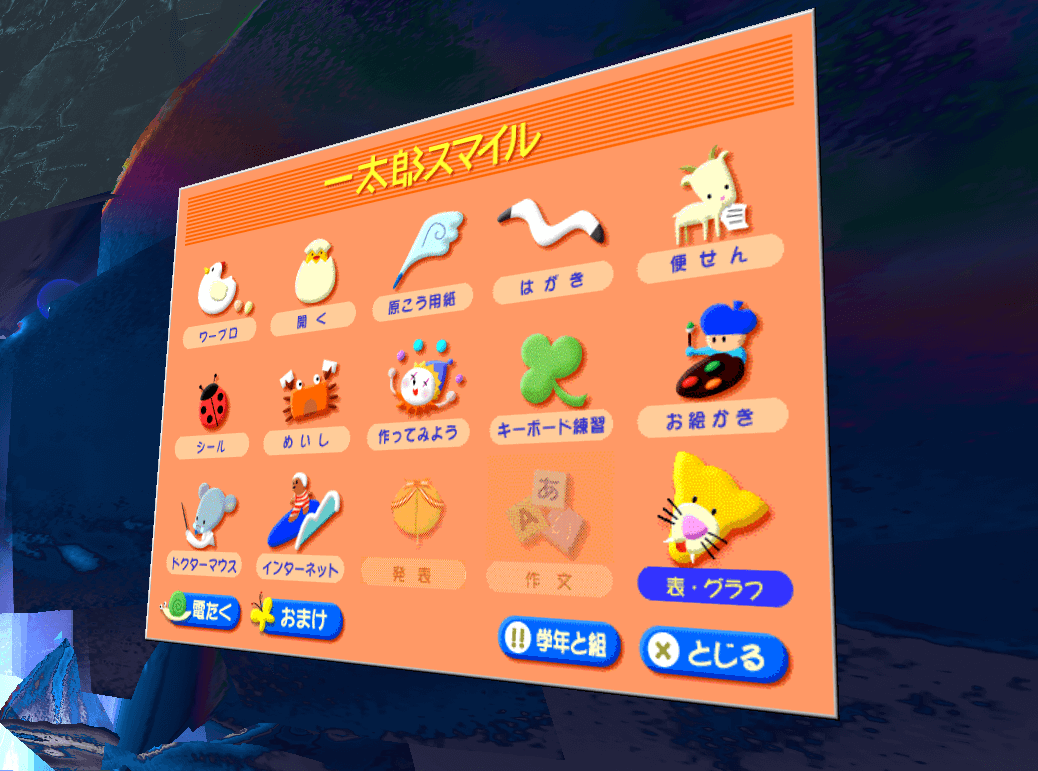 And then there is a huge display of LEPER’s works. 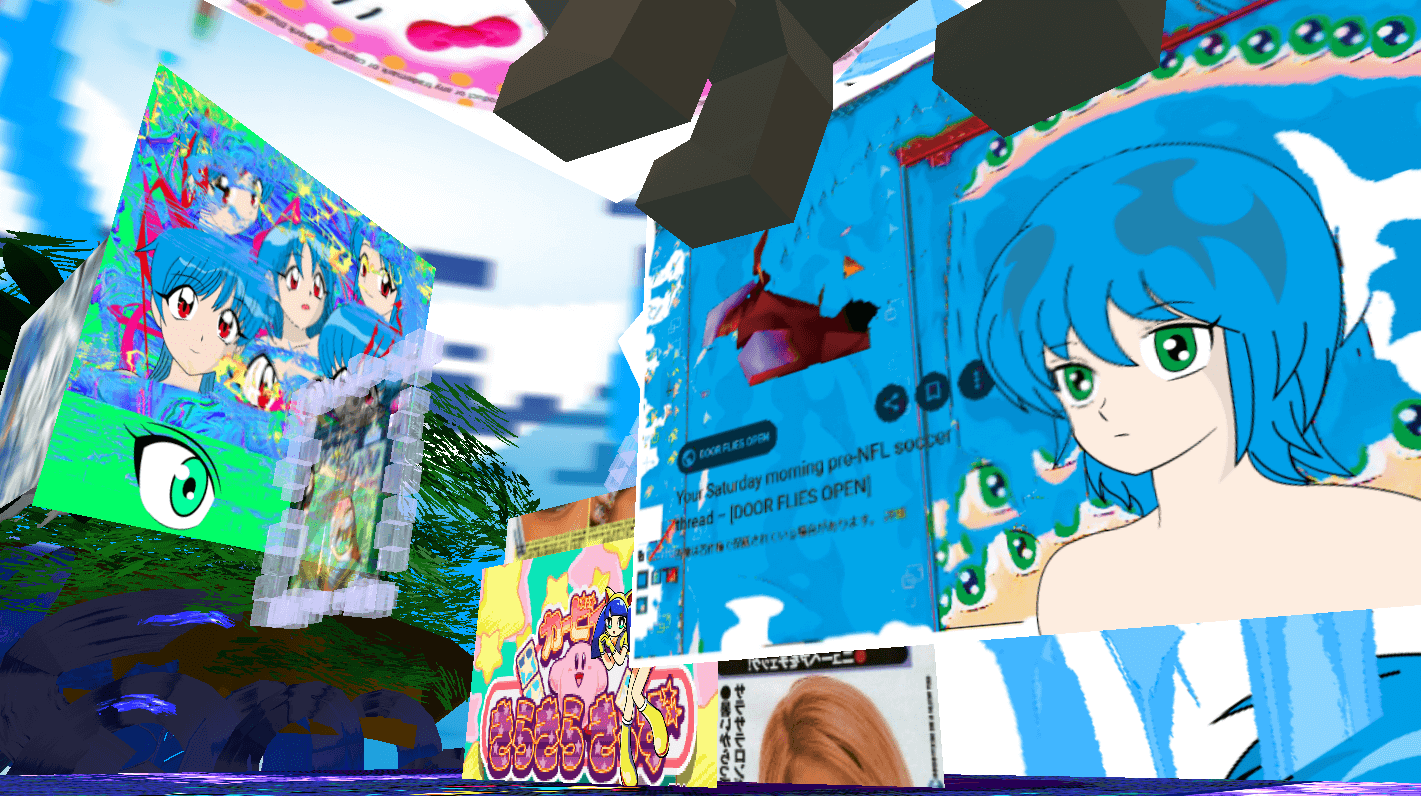 At first glance, it looks like a haphazard choice, but many of them are things we were exposed to in the early 2000s.

Comparing these images selected for digital expression with LEPER’s past works, we can read the new mood of LEPER’s works.

At the core of LEPER’s works is characters that look like they belong in a 1990s cartoon.

Through her art works, she has attempted to transform the image of these characters by transferring them to everyday materials, rather than to canvas, with features such as “natty” textures and large eyes. 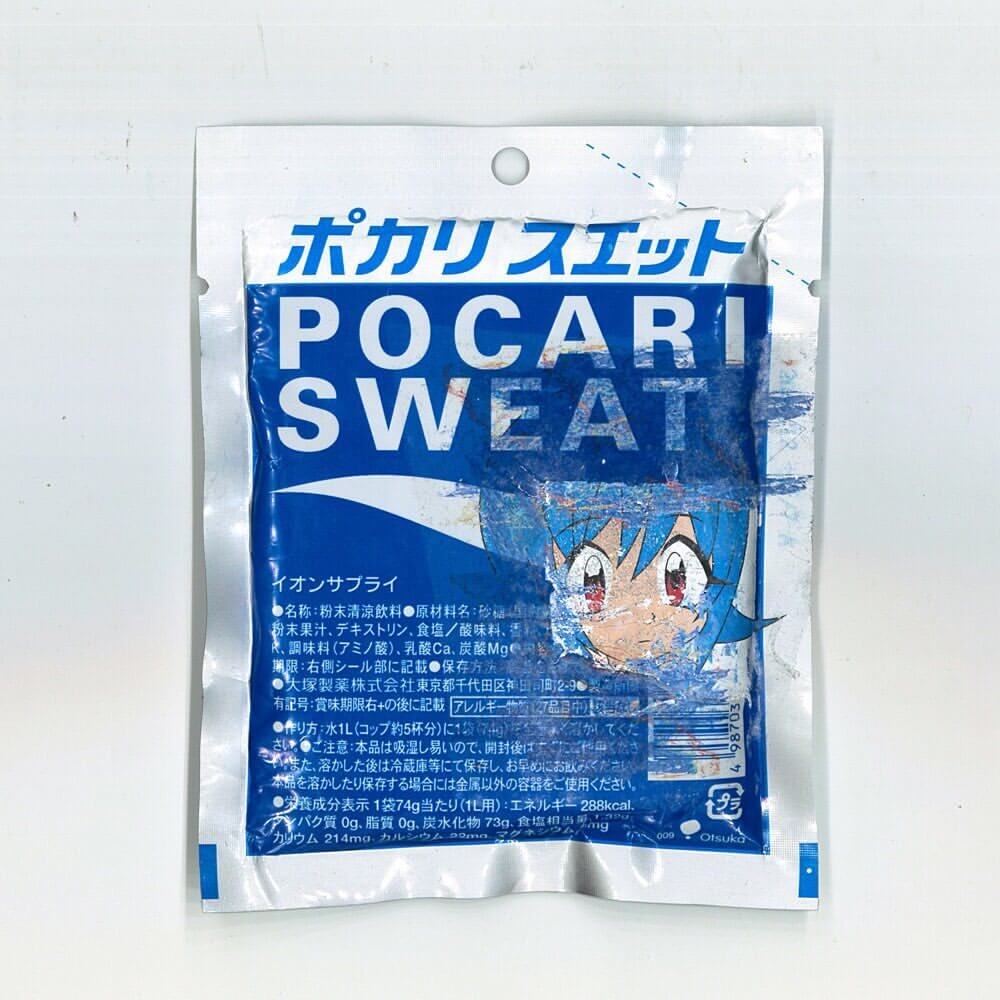 LEPER’s recent efforts include not only physical expression, but also more and more expression on digital media. This VR experiment is one of them.

In the past, she has also done VJs in clubs.

She collected 2D images from the 2000s that were released on the Internet, and arranged them in a collage-like fashion. By doing so, the amount of information displayed on the monitor is enormous, beyond the range of what we can process, creating chaos.

The digital expression that disrupts the originally designed and intended image is the “internet scum” of LEPER.

This time, “LEPER” is a work that allows us to experience the Internet scam, which was displayed on monitors and in 2D, spatially and three-dimensionally.

I feel that this will be LEPER’s entry into a new realm of artistic expression, not only using animated characters from the 1990s, but also challenging new expressions using images from the Internet.

This article was introduced in an attempt to examine authorship and image through her works.

If you take the time to appreciate the works, not only from perspectives other than those mentioned above, you may discover something new.