In this article, I review the work “Shrink” by TOMORO KINOSHITA, an artist who participated in NEWVIEW CYPHER 2021.

NEWVIEW CYPHER is a project in which artists and creators who are active outside of XR activities use STYLY to create XR.

Twelve artists and creators participated in this project, and we will be featuring reviews of their scenes in Pick Up Scene. 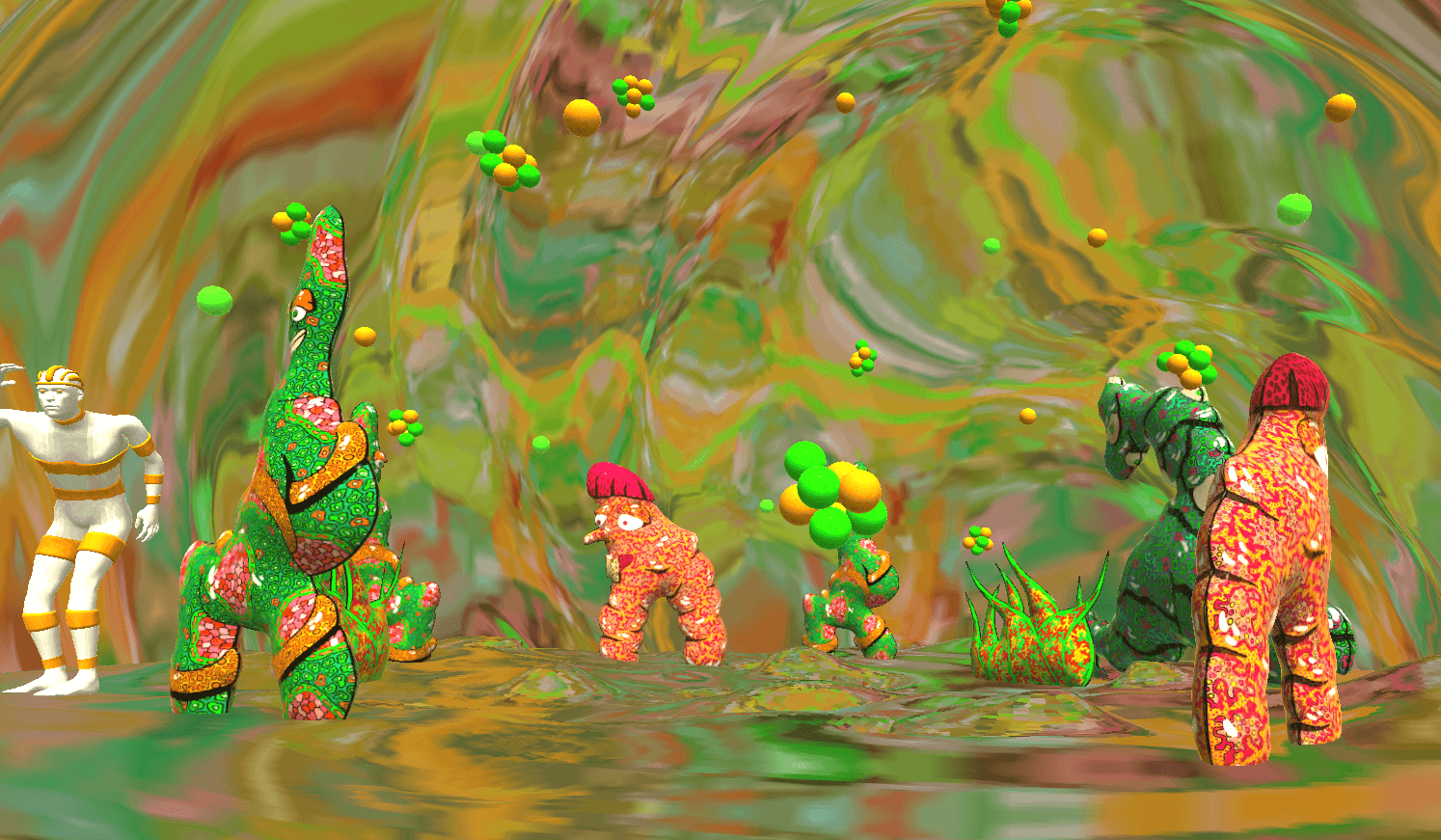 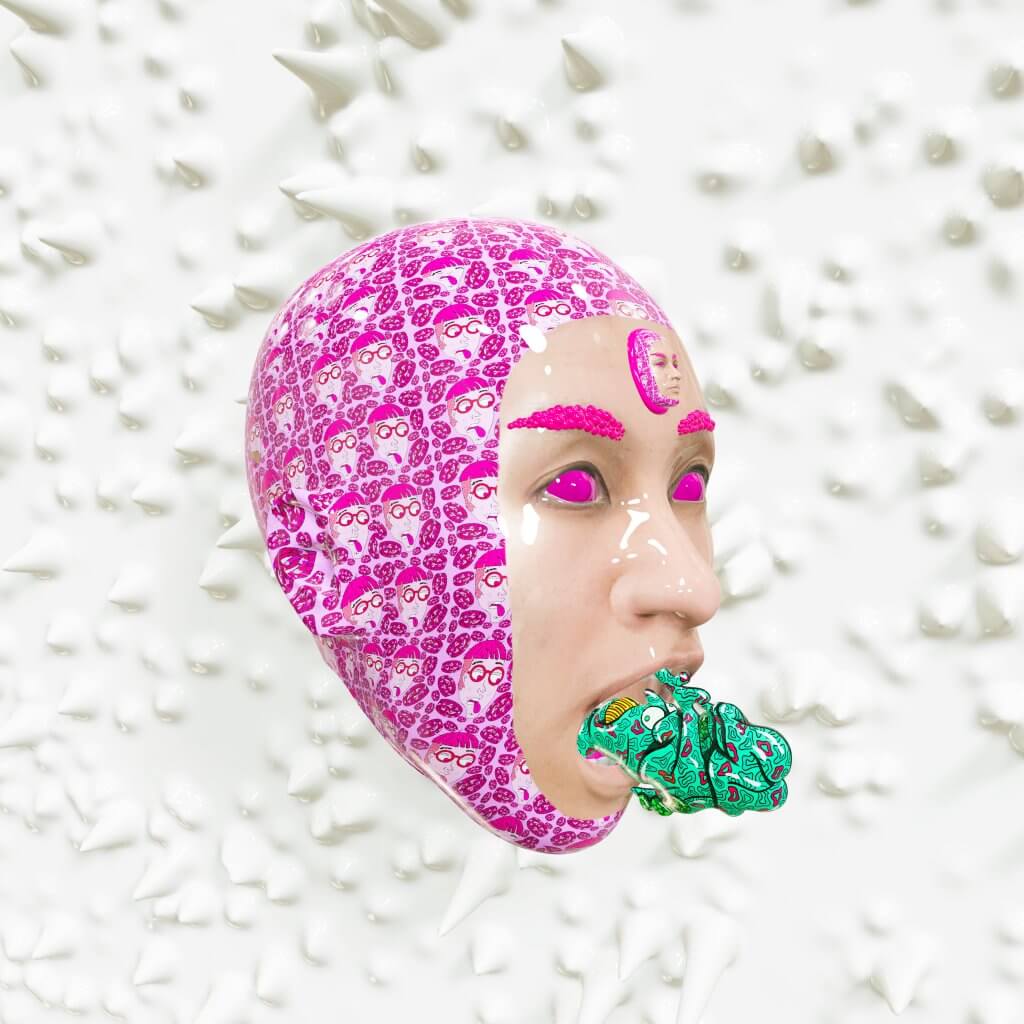 TOMORO KINOSHITA creates videos and artworks that fuse 3DCG and illustrations.
His works are composed of pop, psychedelic colors and strange looking creatures, and his specialty is an expression that catches the viewer’s attention.
He originally started his career as an illustrator, but he began using XR to create works with a more immersive view of the world.
He would like to explore ways of expressing the space he envisions without noise.

TOMORO has been constructing various characters and spaces based on a psychedelic world view. The following article summarizes a report on his past works.

I would like to introduce his work from a higher level, based on his past works.

When you put on a HMD and start the scene, you will see a space like a dome.

The world is a little narrow.

When you look around, you can see characters with Tomoro’s distinctive coloring. 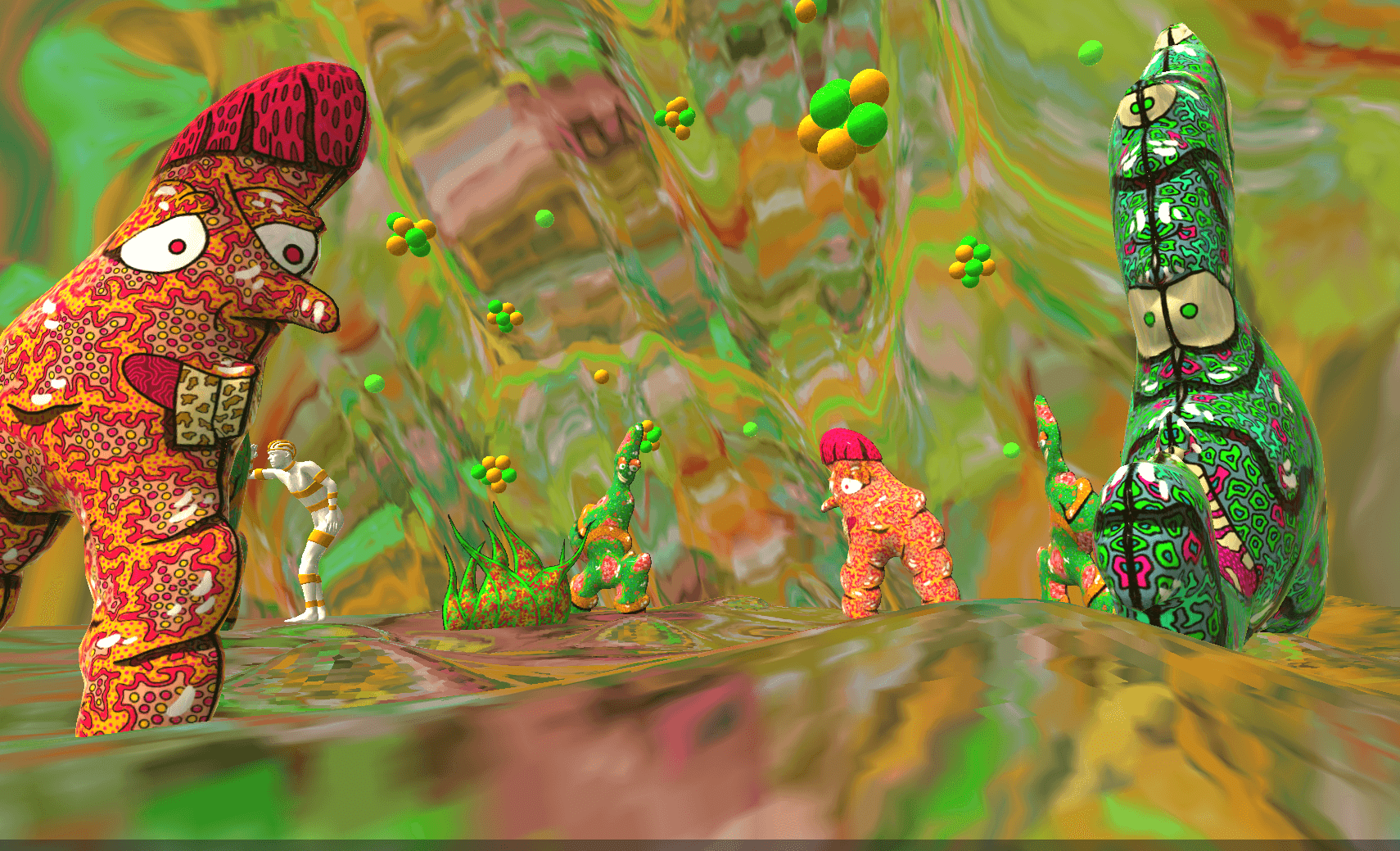 We experience the yellow and green colored world.

You need to move your head back and forth, left and right, and look around to appreciate the world.

The space of the work itself is very small, so there is no need to move.

If you look through the hole in the space, you can see the face of the monster watching us from below. 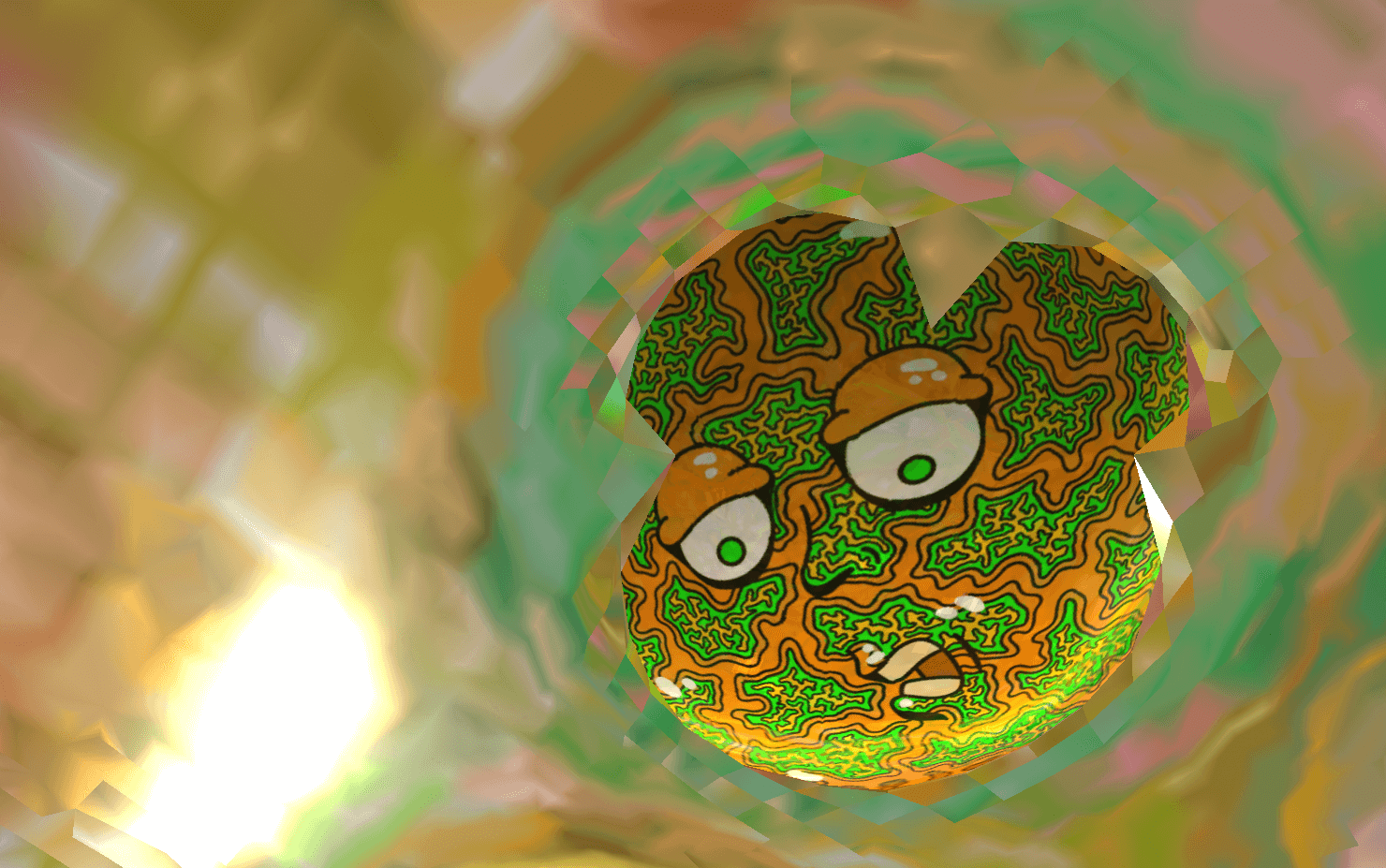 When you look in, the other side is also looking at you. 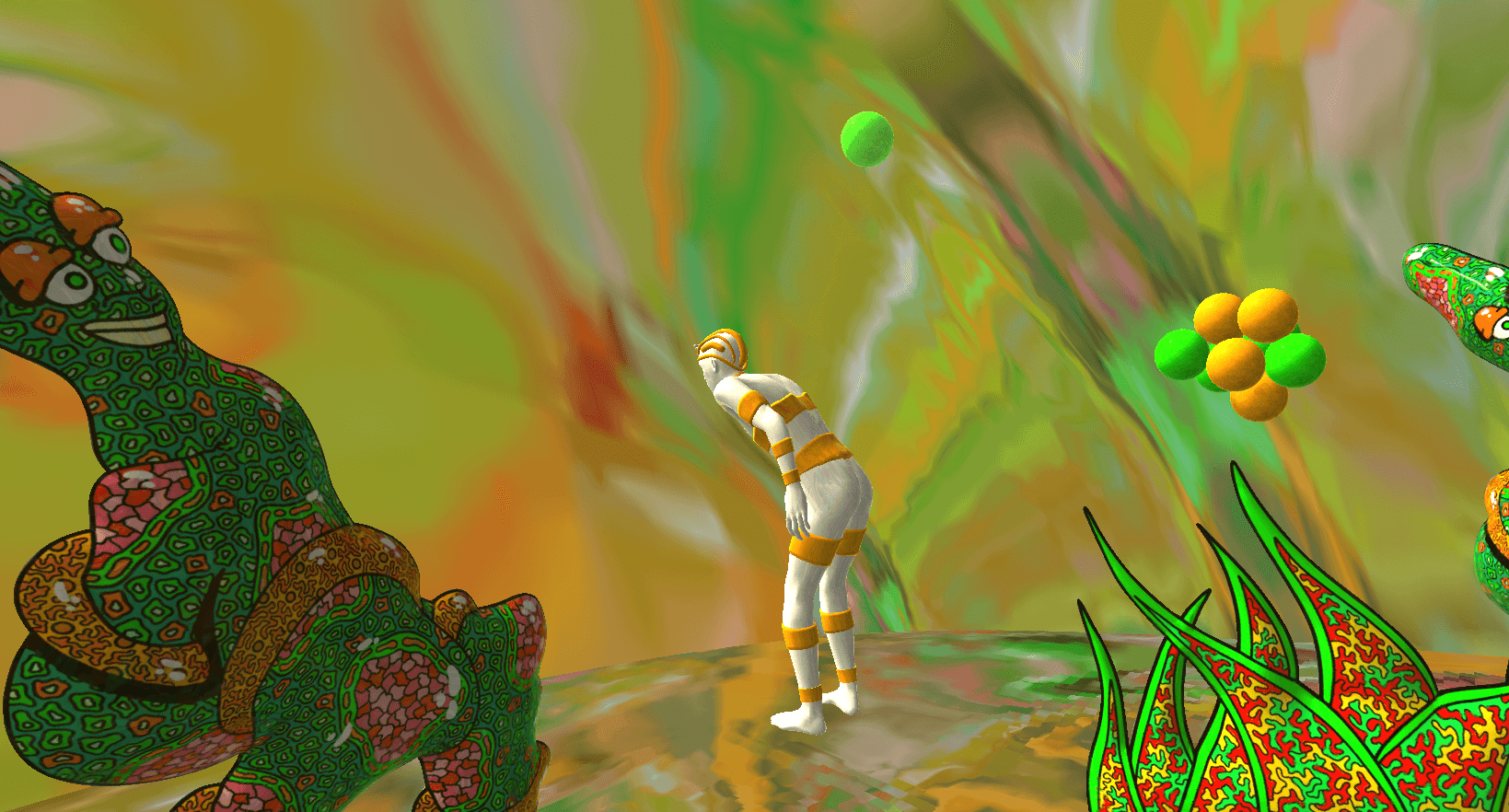 A person watching the outside of the dome

When you force yourself to go outside the dome, there are giants surrounding the dome. 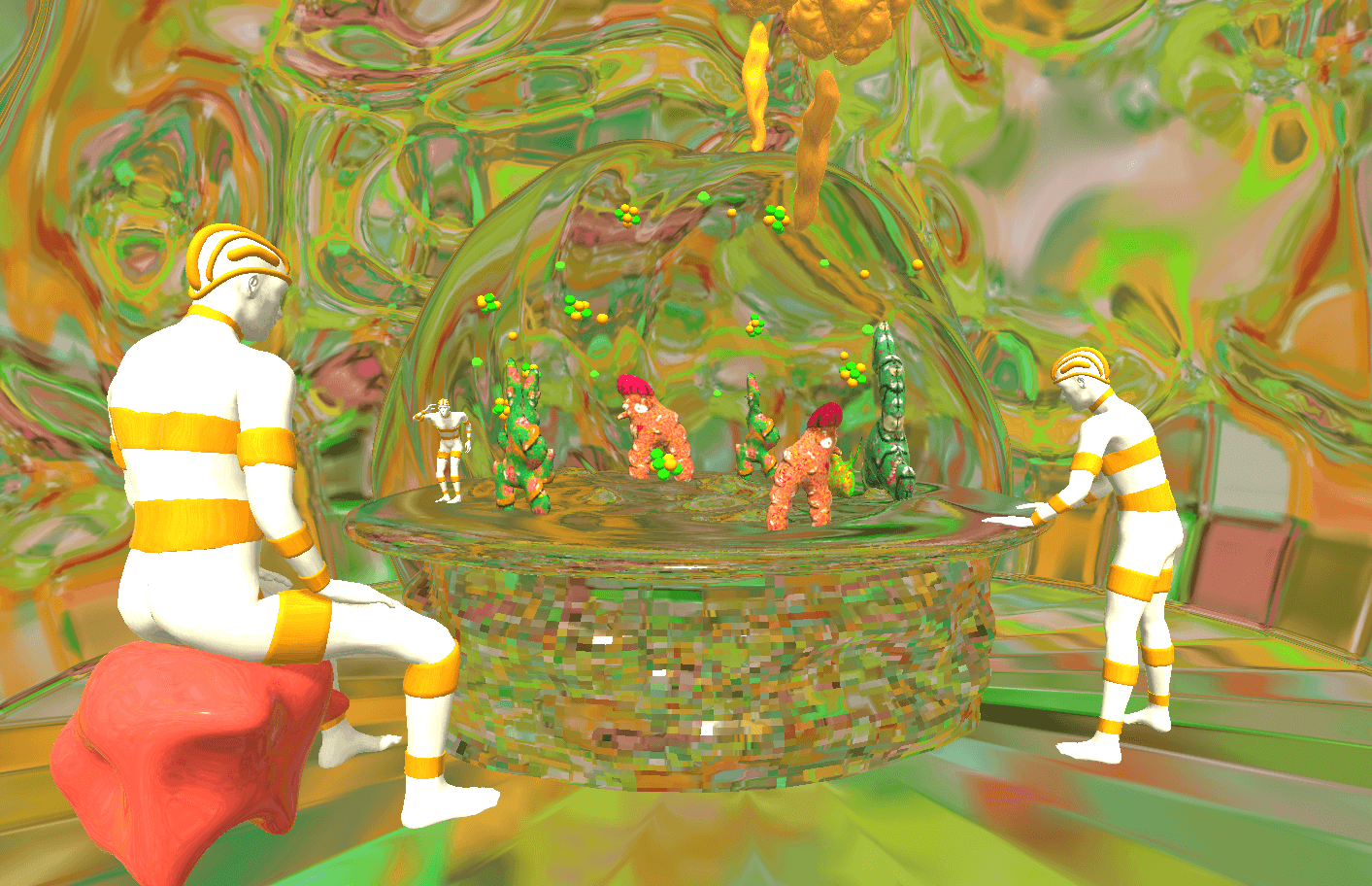 Monsters peeking in, people watching outside, and giants.

Based on these symbols placed in the space, I thought that “Shrink” might be a work that suggests the meta-structure of VR.

To begin with, VR is a viewing device and system that allows the viewer to experience spatial works based on visual information. With this system, the viewer does not view a fixed set of “pictures”, but rather has the experience of searching for the “pictures” he or she wants to see. In addition, game engine-based VR such as STYLY incorporates movement and interaction, which reinforces subjectivity.

In the virtual world, the figure of the viewer wearing goggles while having subjectivity can be seen by the people around (others) appreciating its strangeness and uploading it to SNS. When the artist himself exhibited in the past, he saw many people sharing the VR viewers on Instagram stories.

Looking over these two layers, we can see that “the viewer is the subject in the virtual world (VR), but the structure is that of an object in the real world.

I think Tomoro’s work metaphorically builds on this structure.

The viewer appears as one of the monsters or objects placed inside the dome.

And on the outside of the dome, there are giants and monsters that look in.

The viewer who accesses the virtual world is the subject, but is an object being viewed from outside the dome.

The giants can be superimposed on others in the real world.

This structure is the superposition of the subject and the object in VR. 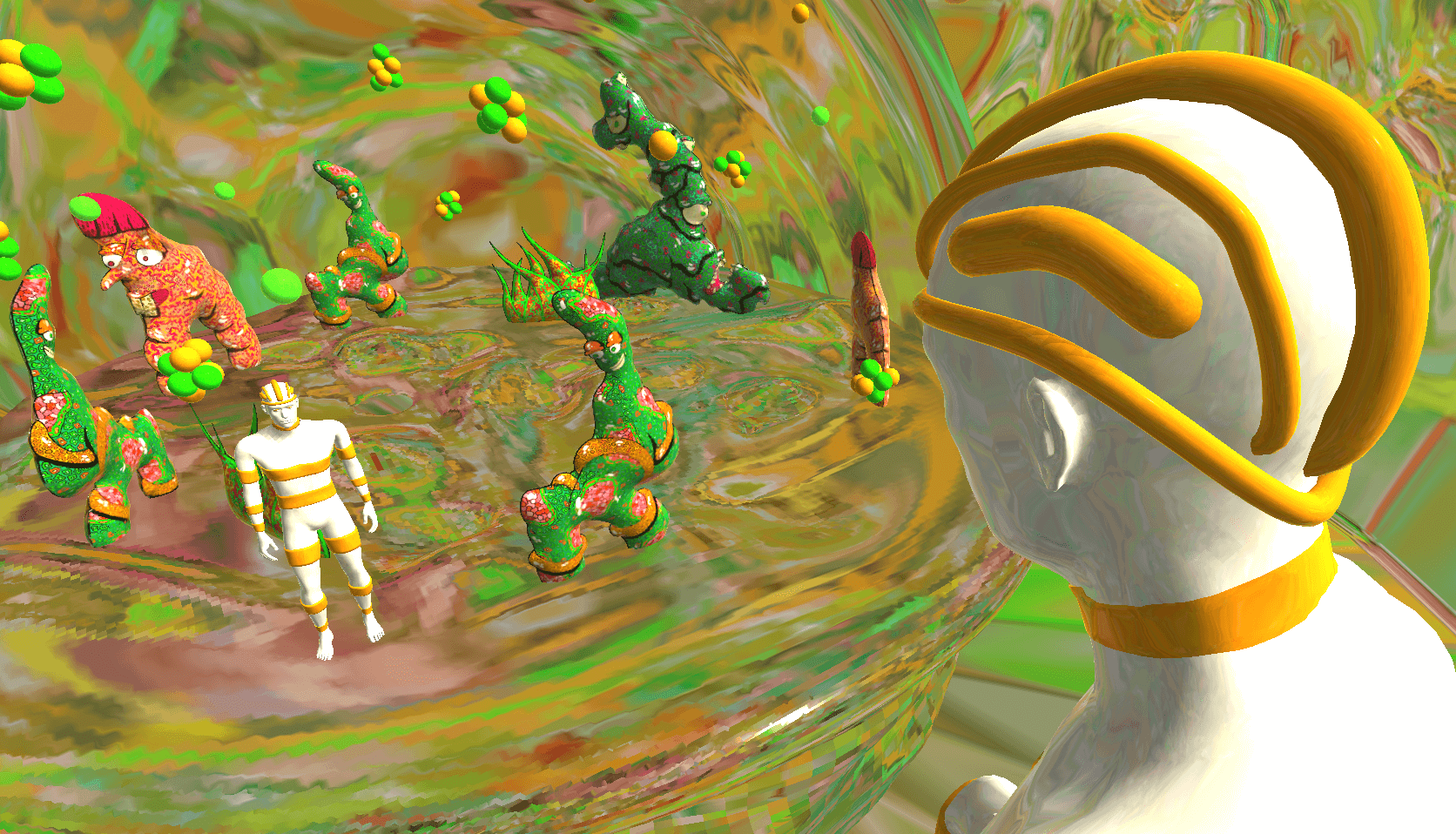 VR is a media device for viewing contents, and in many of TOMORO’s past works, the main experience was to create the artist’s worldview spatially and to view that space.

However, if we think about it from a media theory perspective, the physicality of the VR device and the objectification of its system creates a context that goes beyond the realm of a viewing device.

The state of the viewer is transformed, and that state can be thought of as floating on the boundary between virtual space and real space.

The viewer feels inconvenienced in the virtual space due to the vulnerability of the VR device, and in the real space, the viewer is deprived of vision and physicality.

TOMORO’s psychedelic coloring, which seems to represent these negative aspects, is spread out in front of us.

I think Shrink is a work that reconstructs the world of TOMORO and VR in a meta-physical way, with a psychedelic representation of the media and physicality of VR.

It could be said that this work is an experience of how to face VR devices while complementing the illustrator/artist aspect of TOMORO.

By looking at TOMORO’s works from a media theory perspective, I think we can get a multifaceted view of his world.

Not only from the perspectives other than those mentioned above, but also by viewing his works carefully, you may discover something new.