Have you ever experienced slow scene loading and behavior in Unity when you put a lot of objects in a scene or use your own objects?

I want to use Unity to handle heavy CG data and photogrammetric data! Let’s take a look at Mesh Optimizer, a useful Unity asset for such situations.

What is Mesh Optimizer?

Mesh Optimizer is a free Unity asset that reduces the weight of meshes in 3D models.
It is a useful tool for reducing the number of polygons in Unity while keeping the objects visible in the scene. 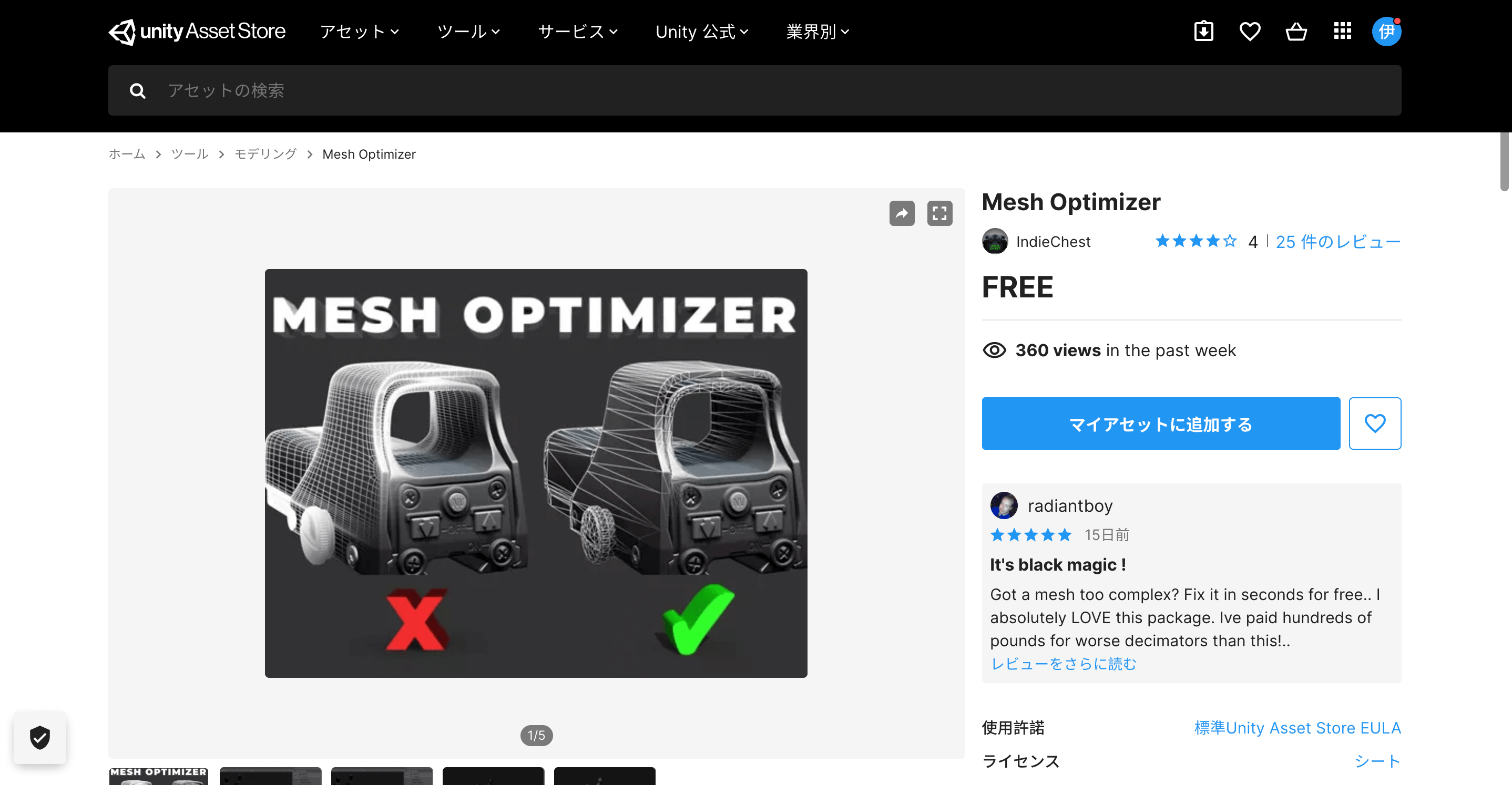 Mesh Optimizer at the Asset Store

You can see that the number of triangles representing the mesh has been greatly reduced.
This is a great way to reduce the weight of Unity games and art. 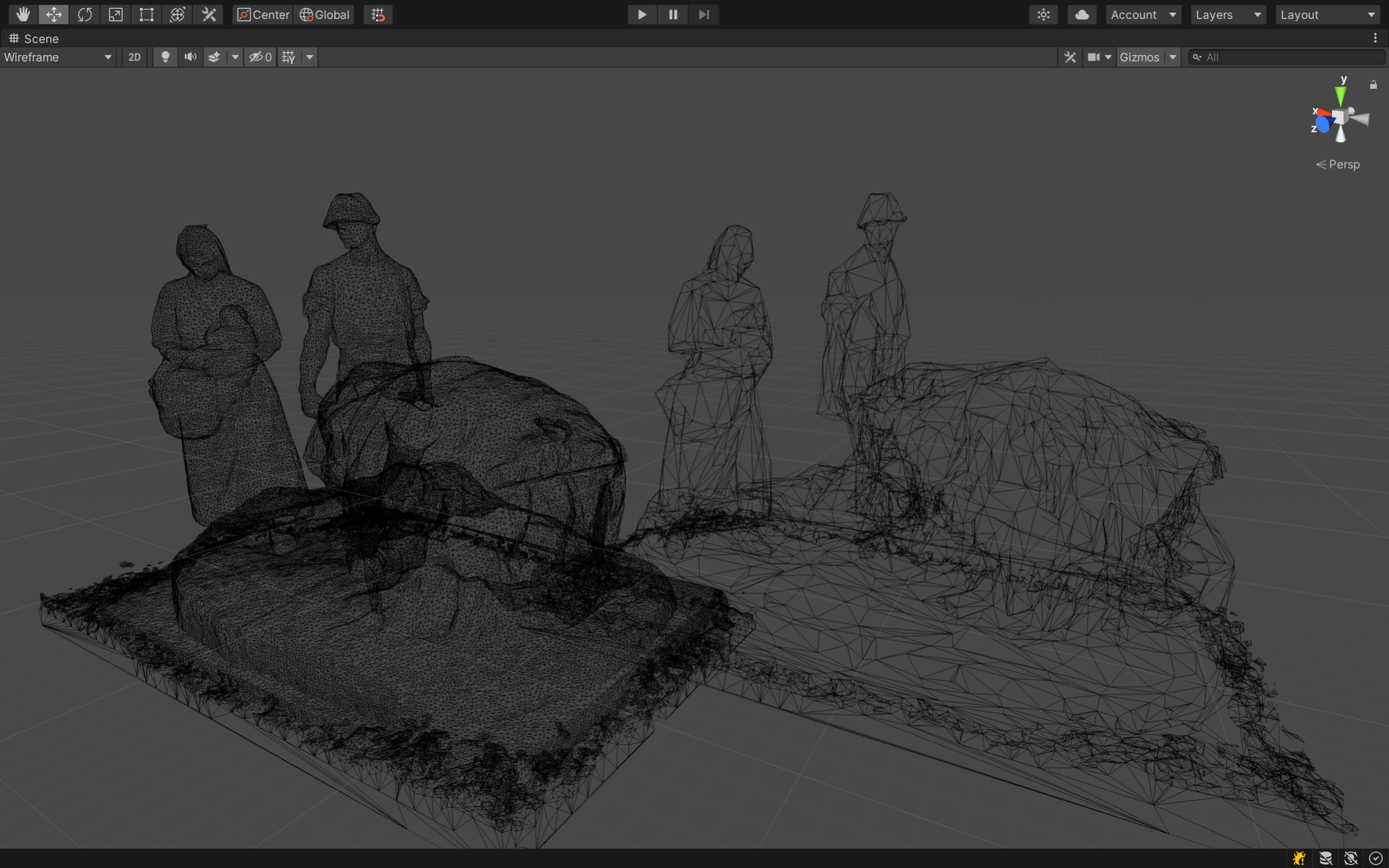 Polygon count before and after using Mesh Optimizer

Let’s take a look at how easy it is to do this in Unity with Mesh Optimizer.

The Mesh Optimizer is a free asset that can be downloaded from the Unity Asset Store, just like any other Unity asset. 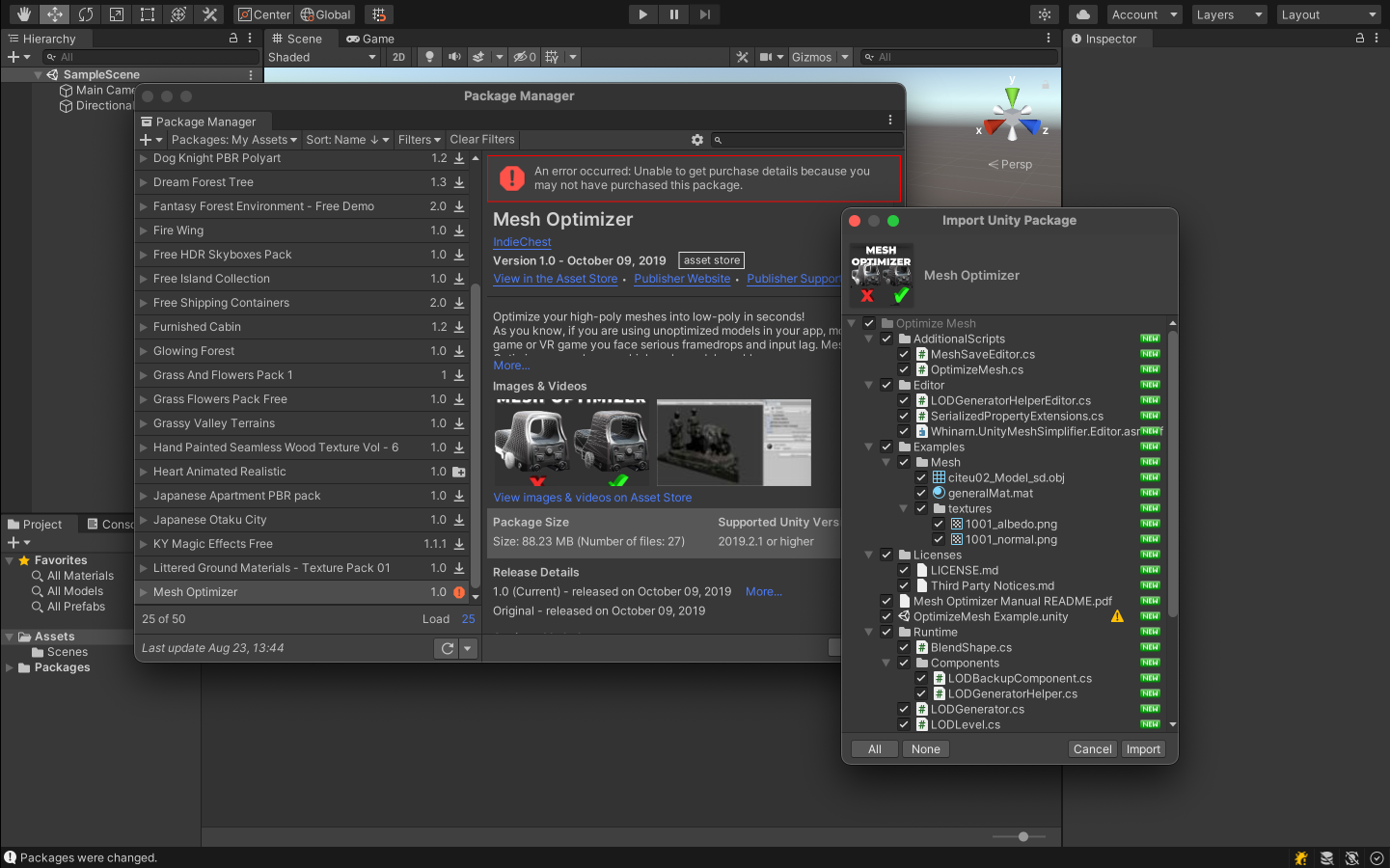 The PackageManager for importing Mesh Optimizer is now open.

When the folder “Optimizer” is added to Unity’s Asset, the download is complete.

Let’s lighten the polygon count of the CG data.

In this article, I will try to lighten the weight of this model.
The data seems to have been generated by photogrammetry, and it looks like a heavy CG. 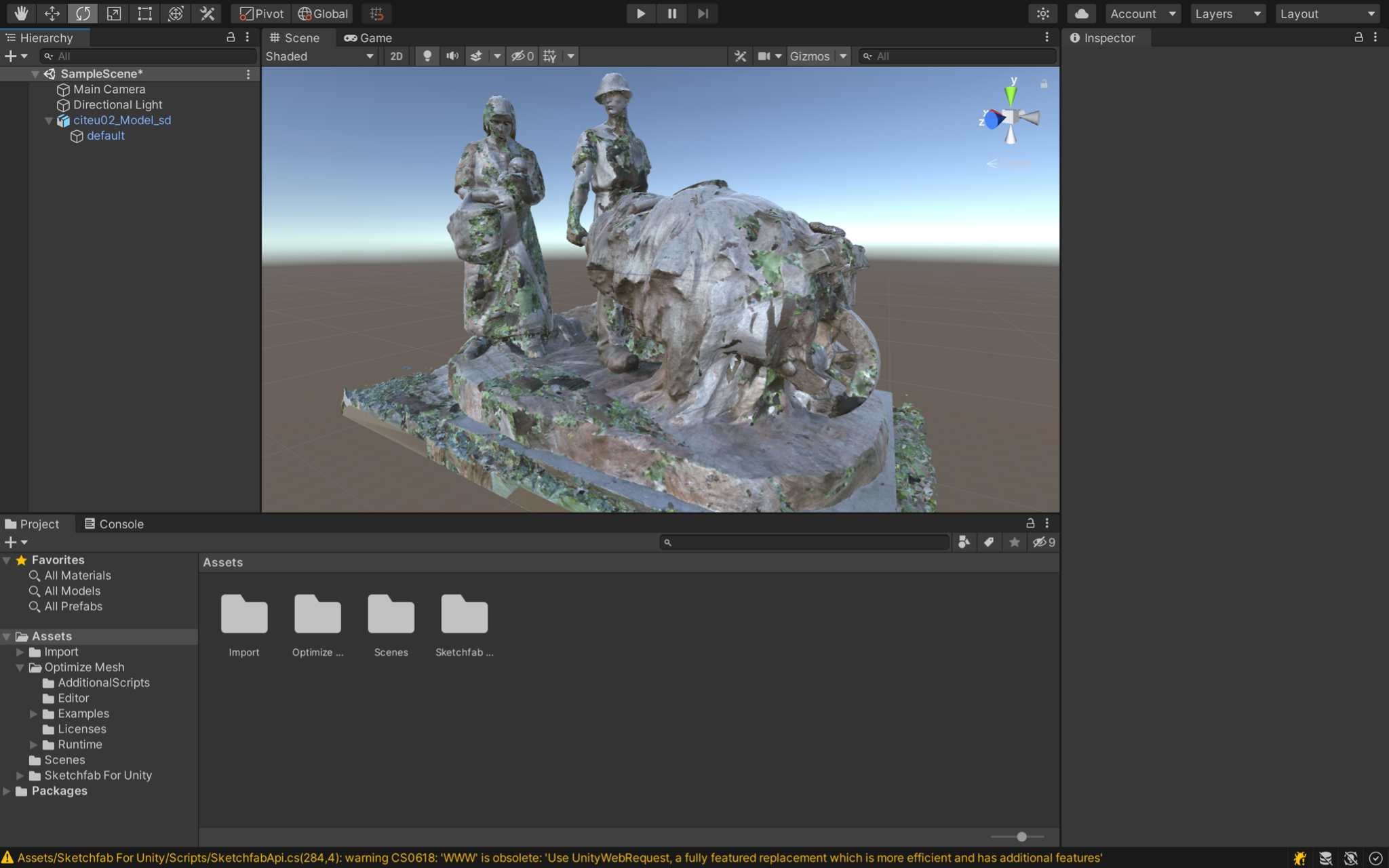 Model to be lightened in polygons

Please refer to this article for how to download the above data from Sketchfab.

[Unity Asset] How to download 3DCG stably from Sketchfab using Sketchfab for Unity.

In Unity, you can change the drawing method of the model by opening the tab in the upper left corner of the Scene window (shown in the red box below).
By selecting “Wireframe”, you can display the model as polygons.
In this view, you can see that the object is made up of many polygons. 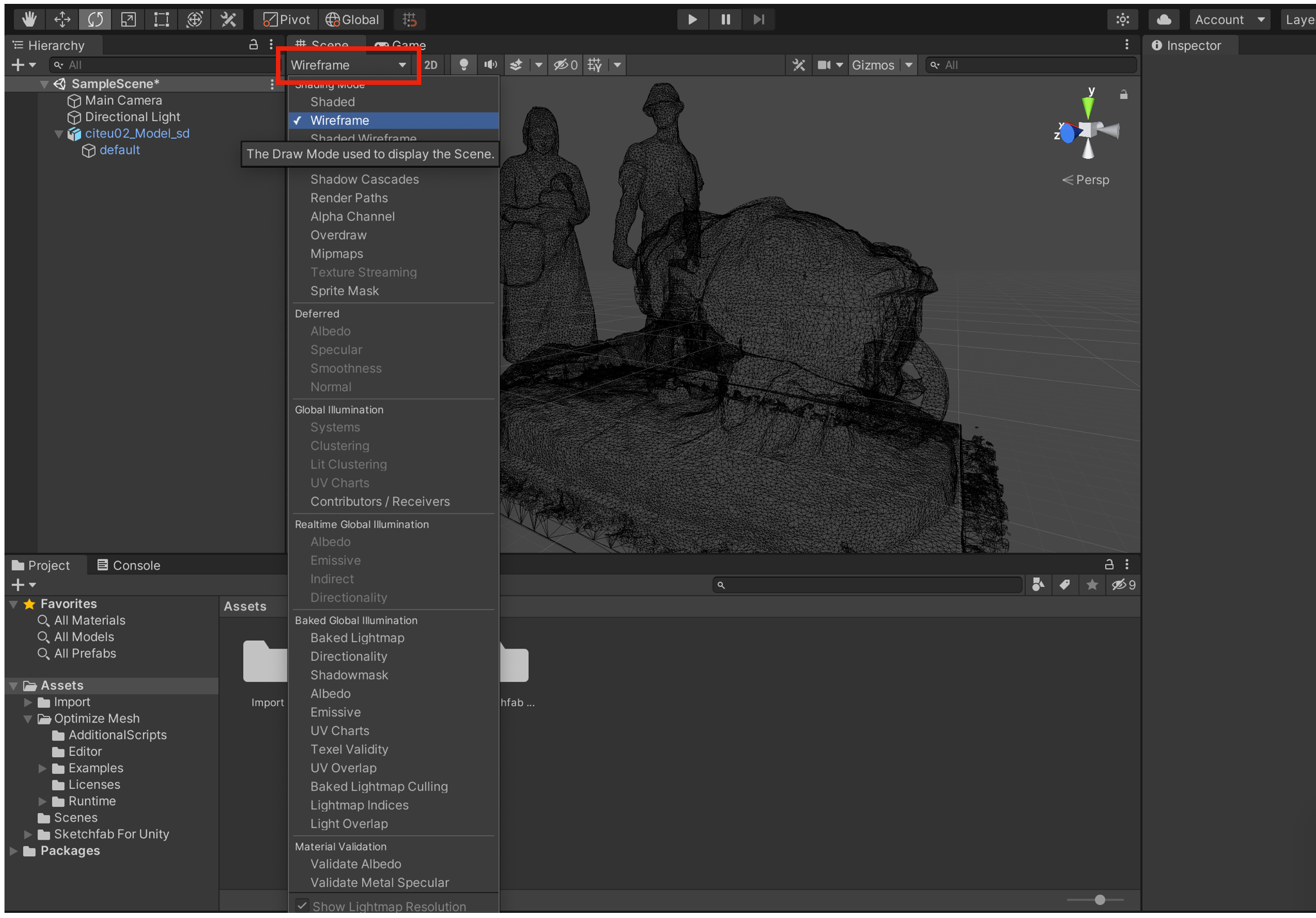 If you set the upper left setting in the scene window to WireFrame, the mesh will be displayed.

The Mesh Optimizer is easy to use. It can be set up by following the steps below. 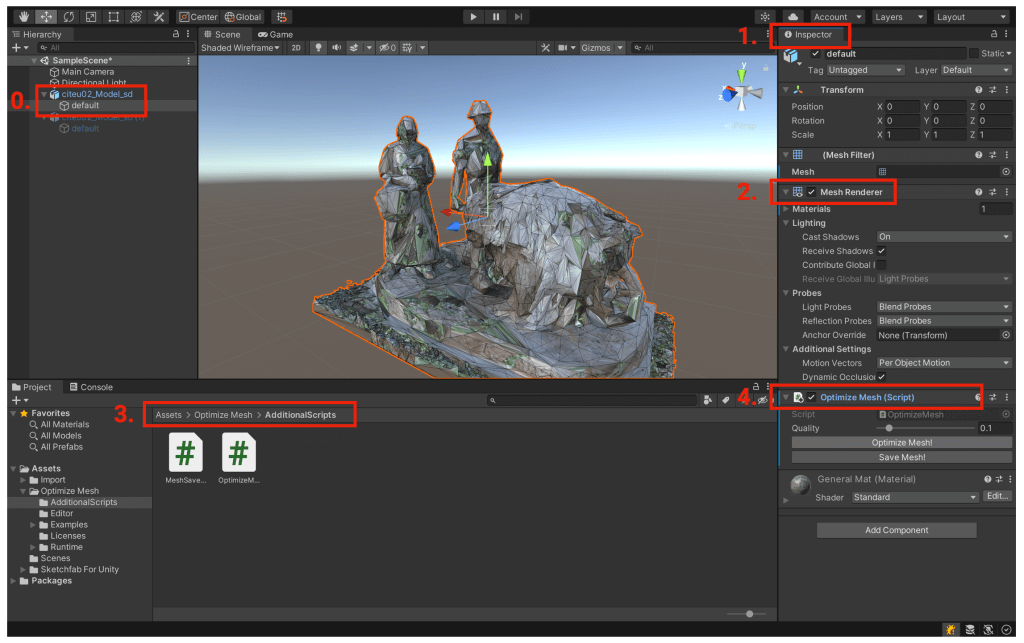 Please check the order of the numbers.

Once this is done, the Mesh Optimizer setup is complete.

The Mesh Optimizer consists of simple buttons as shown below. 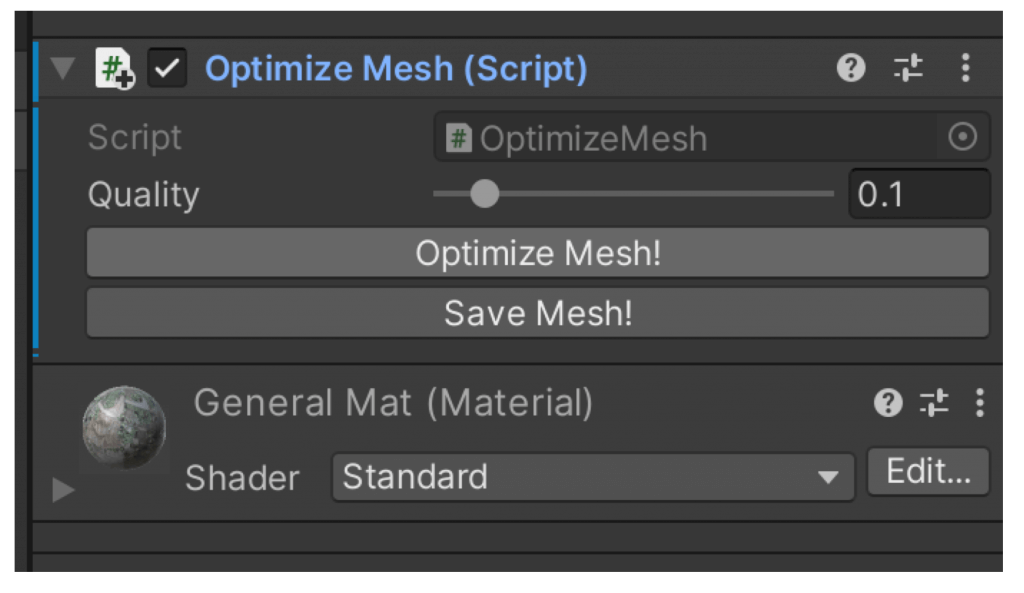 An Optimize Mesh component is added

By changing the “Quality” value, you can reduce the polygon count of the object.

Below is an image with the Quality set to 0.1 and “Optimize Mesh!”
The image on the right is the original image, and the image on the left is the mesh that has been lightened. 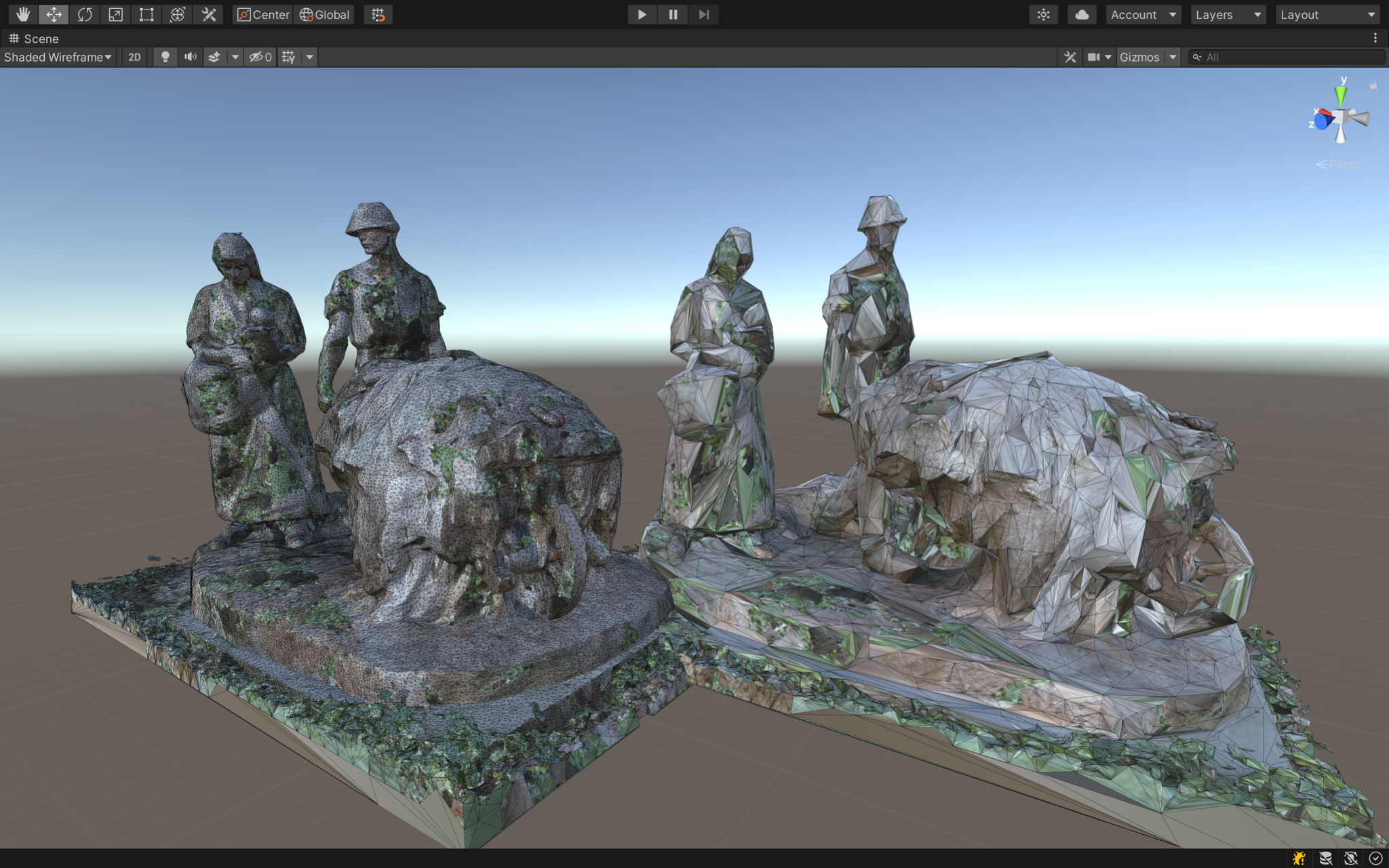 In the Wireframe view, you can see that the number of polygons has been greatly reduced.

Polygon count before and after using Mesh Optimizer 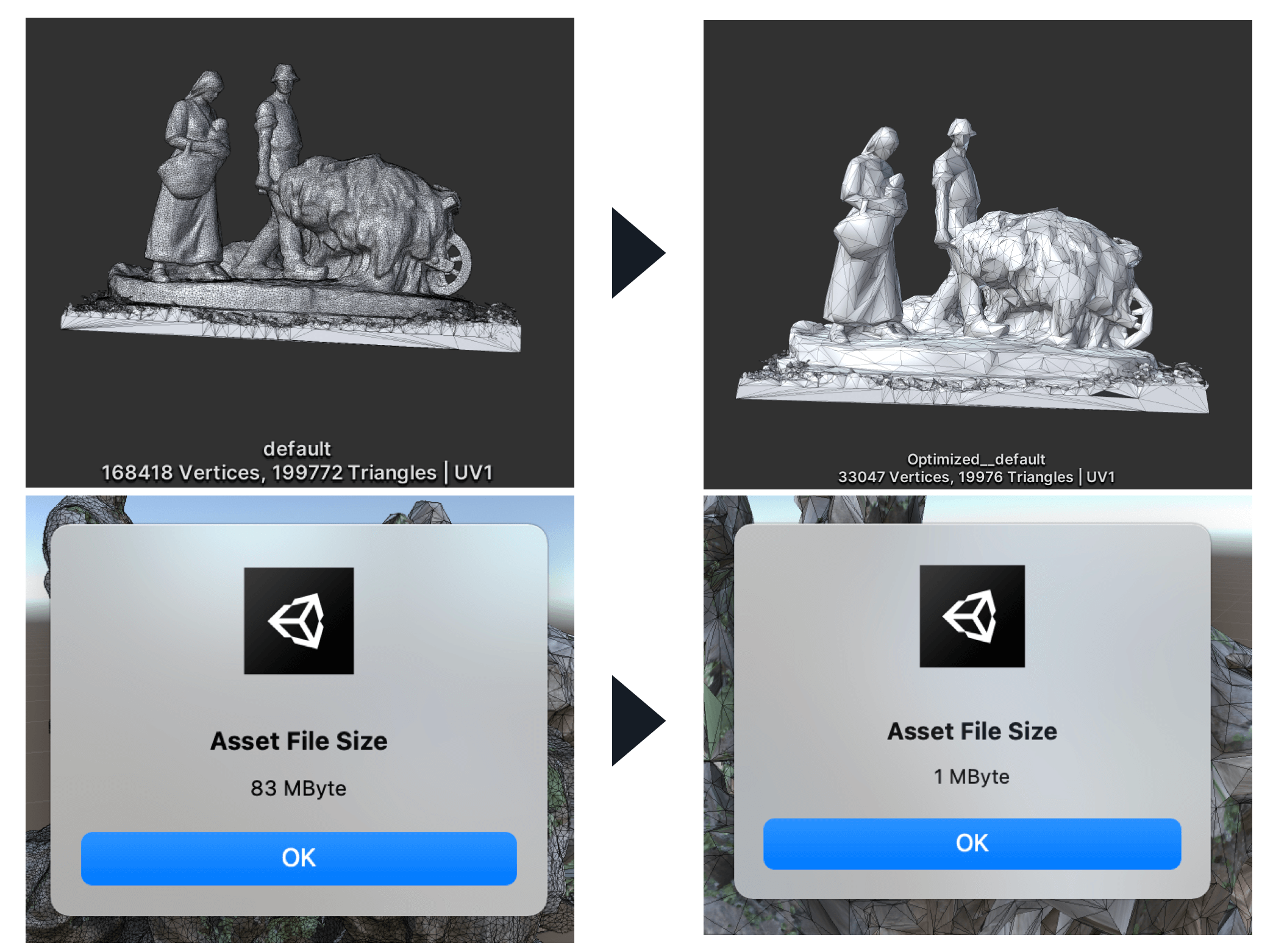 In this case, the value was greatly reduced to “0.1”, so the appearance is a little rough.
Please adjust the value according to the object you are using to find the right balance between appearance and lightness of the object.
It is easy to lower the value gradually to 0.9, 0.8, 0.7, and so on, until the change in appearance is not noticeable.

Let’s save the lightened object.

Mesh Optimizer also allows you to easily save the data after reducing the polygon count.

When you have completed the reduction as shown above, simply select the “Save Mesh!” button to save the reduced object.

After selecting the “Save Mesh!” button, you will be prompted to choose a name and a location to save the file (this time on a Mac). 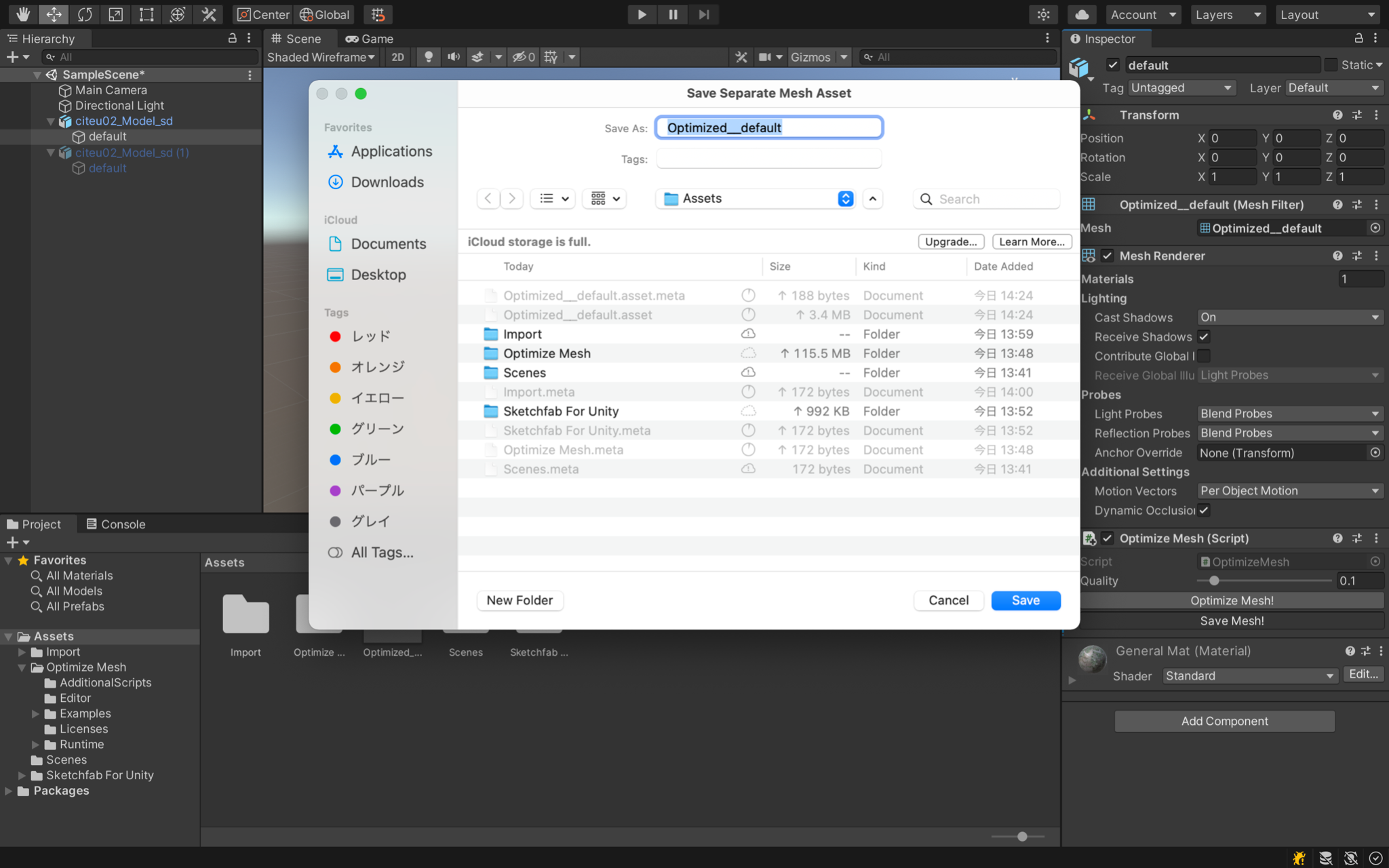 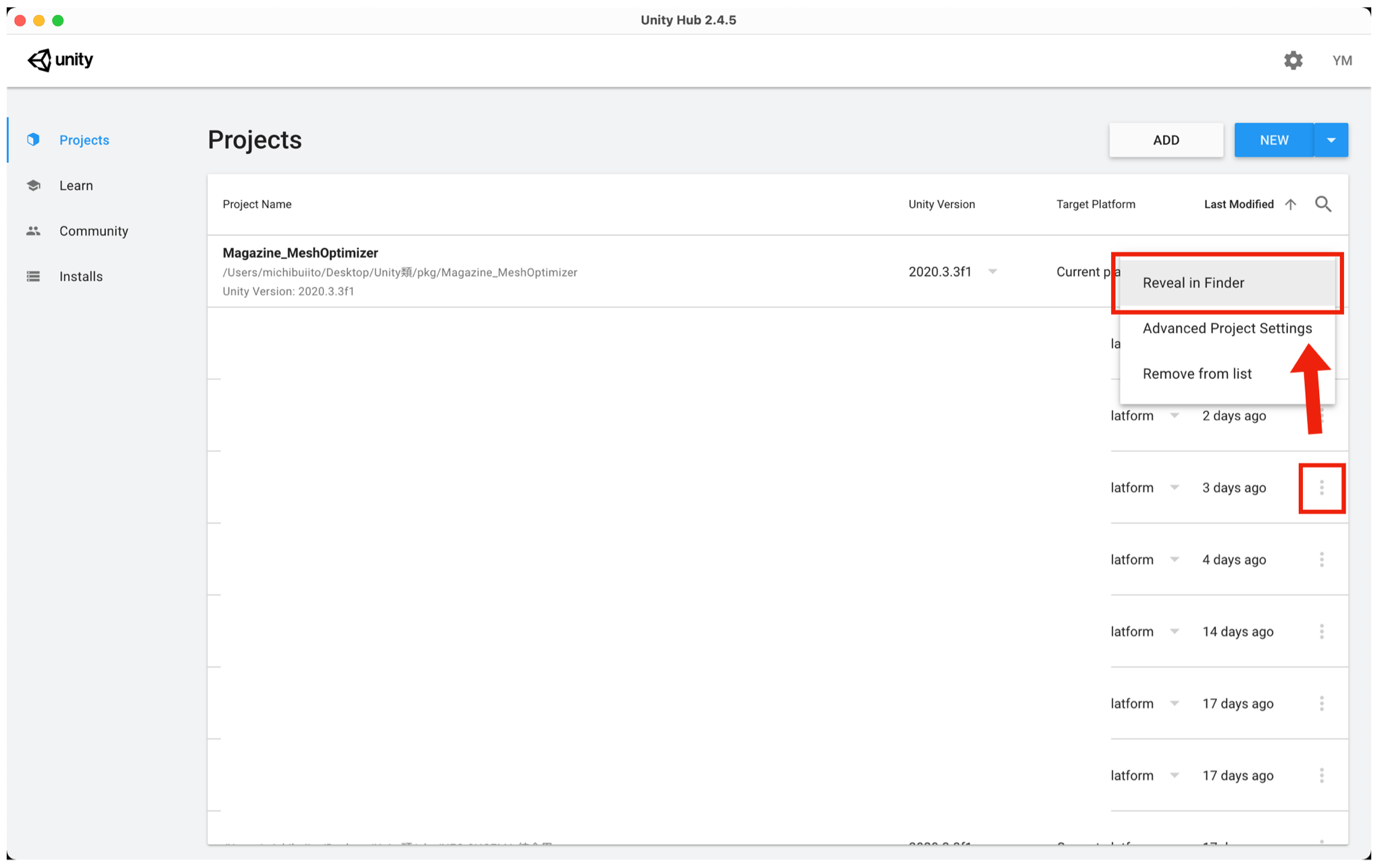 Open Assets in the Finder and save the data there, as shown in the following image.
The red frame shows the saved lightweight data. 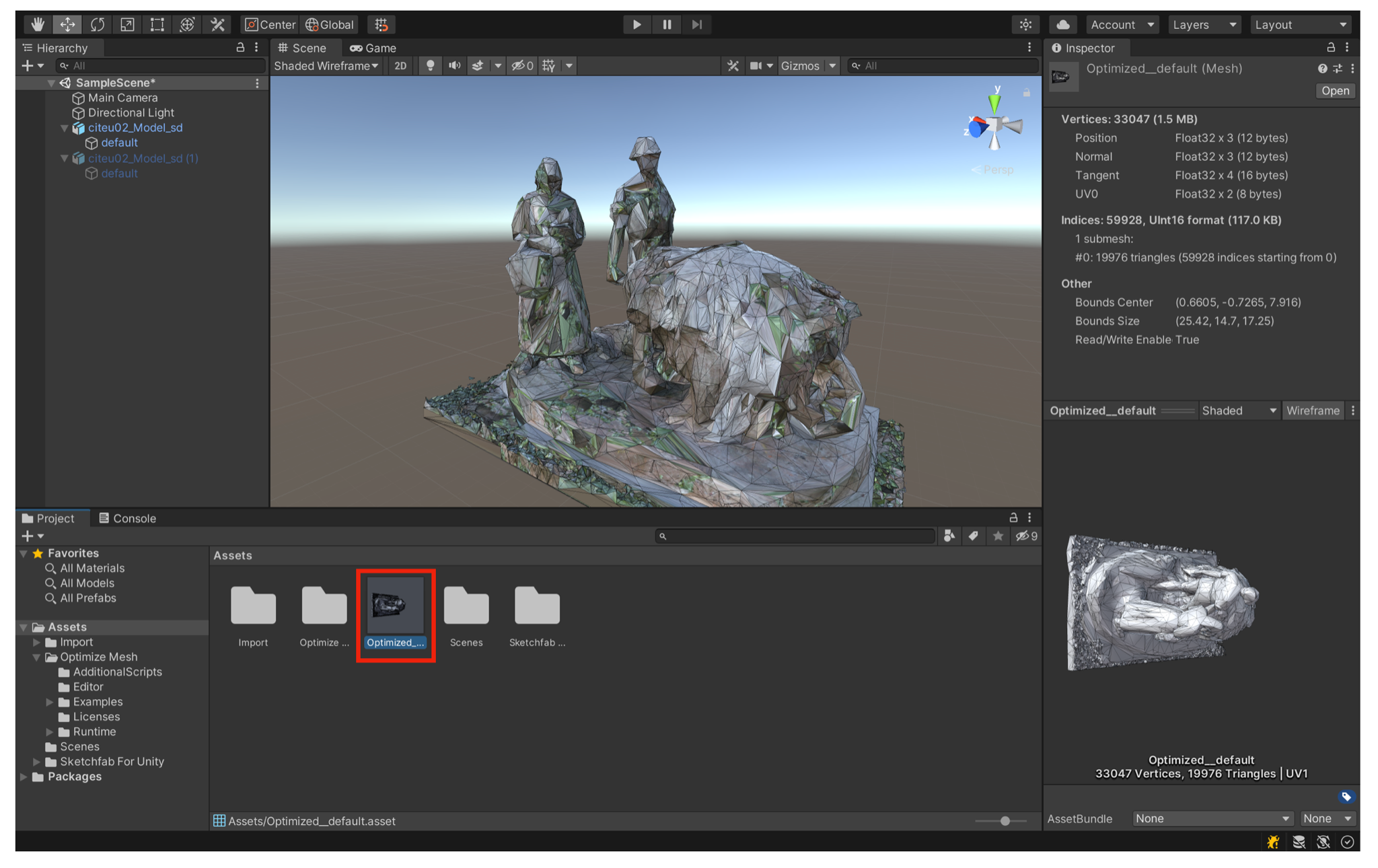 The model is now saved in Assets.

When you want to return to the original mesh

If you want to revert to the original mesh, you can do so in the Inspector of the object you were editing, by selecting the Mesh you were editing from the circular button on the right side of the Mesh Filter.

Select the original Mesh from the Select Mesh window that opens by pressing the circular button on the right side of the image. 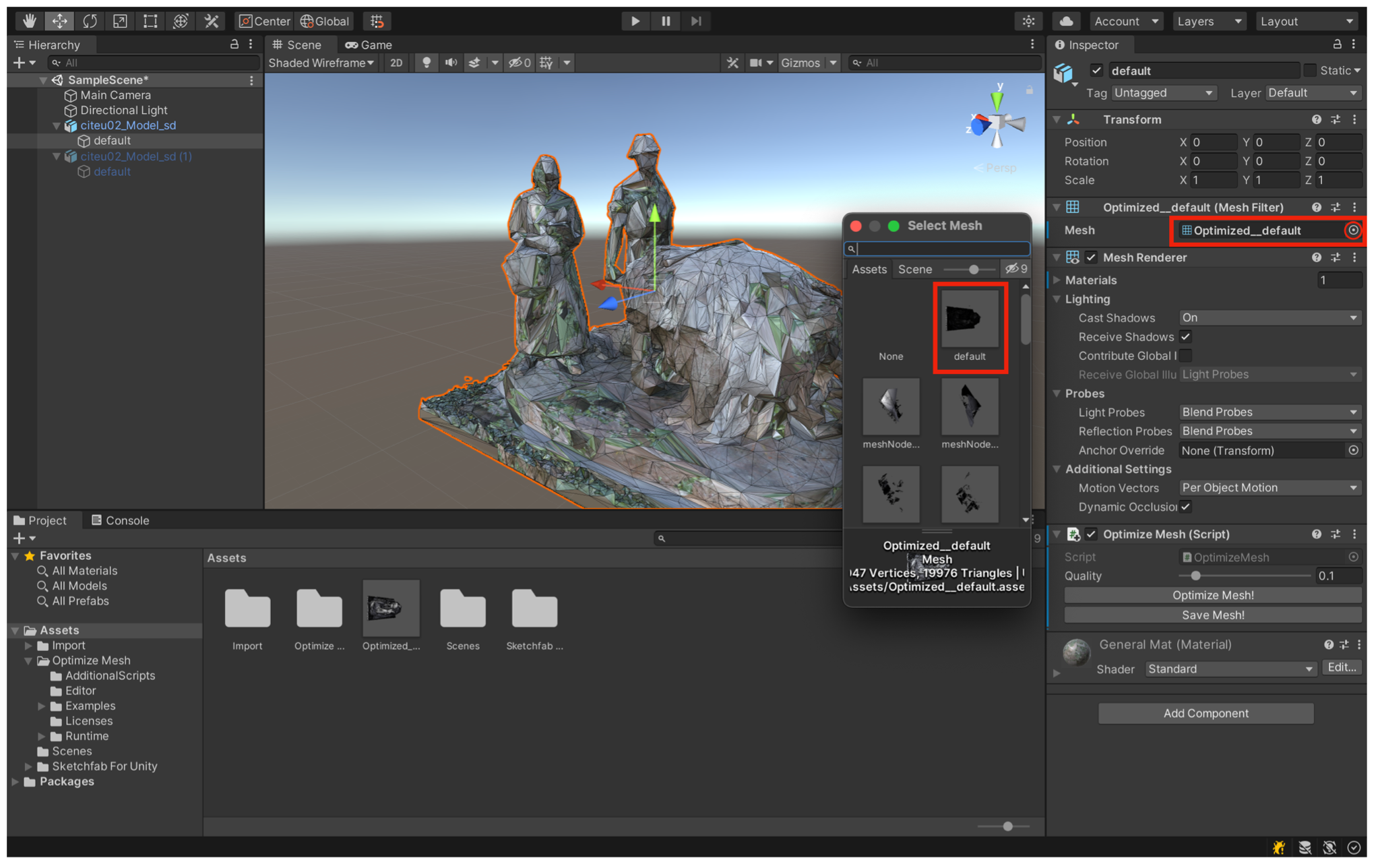 In this article, I introduced the Mesh Optimizer, which allows you to reduce the number of polygons in CG by adjusting simple values.
I would like to share some tips on how to use this asset.

Reduce the weight of backgrounds and other items, not the main characters and items.

It is a good idea to reduce the weight of items that users do not pay much attention to, rather than items that stand out or are related to the production.
Trees and rocks are essential for backgrounds, but they can be data-heavy, so it is recommended to start with such items.

Rounded objects are easier to reduce in weight.

It’s easier to adjust if the meshes are combined as much as possible.

Skinned Mesh Renderer is not supported.

Skinned Mesh Renderer, which is used for avatars such as Unity-chan, does not support Mesh Optimizer because the way Mesh is processed is different.

Especially in VR and AR, making the scene lighter and more comfortable for the user will lead to a better experience.
In VR, using heavy scenes is said to be the reason for VR sickness.
Let’s lighten the objects and make xR a crisp and pleasant experience!