In this article, I’ll show you how to use Blender, make a simple model, and upload it to STYLY for those who have never done modeling before.

If you are new to Blender, please refer to this article for the first basic operations.

[Introduction to Blender 2.8] Let’s start modeling (1) How to download/basic operation

In the first part, we created a simple model by scaling and moving simple primitives.

In the second part, we will finally get into the detailed operations.

Here is the model we will be working on. 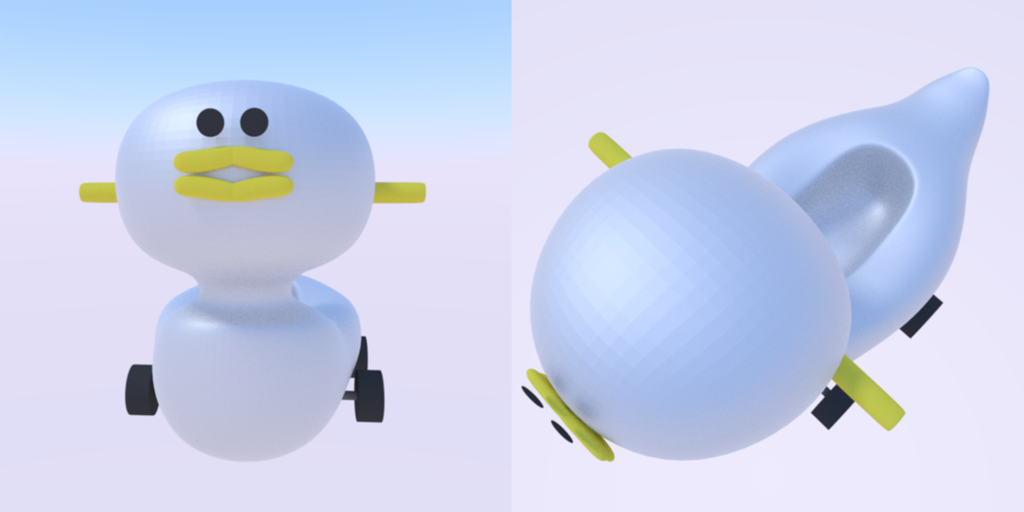 This is a duckling potty with tires, which we will create in two articles.

When you open Blender, select the cube that is placed from the beginning. Then press [Tab] key. Then, the display will look like the left to right image below. The selection of the object has changed.

Switching with the [Tab] key

The left side is called object mode, and the right side is called edit mode. In object mode, you can zoom in and out and move objects as they are. In edit mode, you can modify the vertices, edges, and faces of the object. When modeling, you basically use this mode to create shapes by tweaking points, edges, and faces. You can switch between object mode and edit mode by pressing the [Tab] key, but you can also do it from the menu bar above. 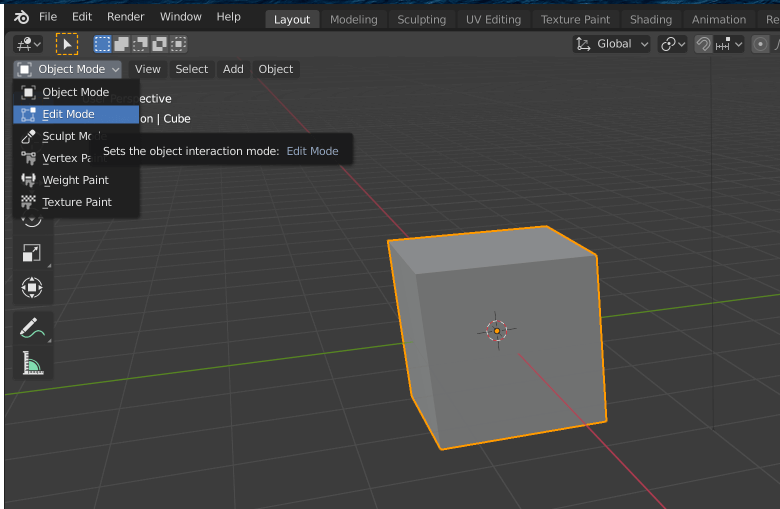 There are many shortcut keys in Blender, and it is hard to learn them, but it is good to learn them so that you can switch modes with [Tab] key.

First, let’s practice Extrude, which is the basic operation to create a shape in Edit mode. When you enter the Edit mode, you will see some icons in the menu bar above.

In the red frame, select a point, an edge, or a face. From here, select the face (far right). Select any face of the cube. In edit mode, you can also left-click to select something. When you select a face, you will have selected a face. 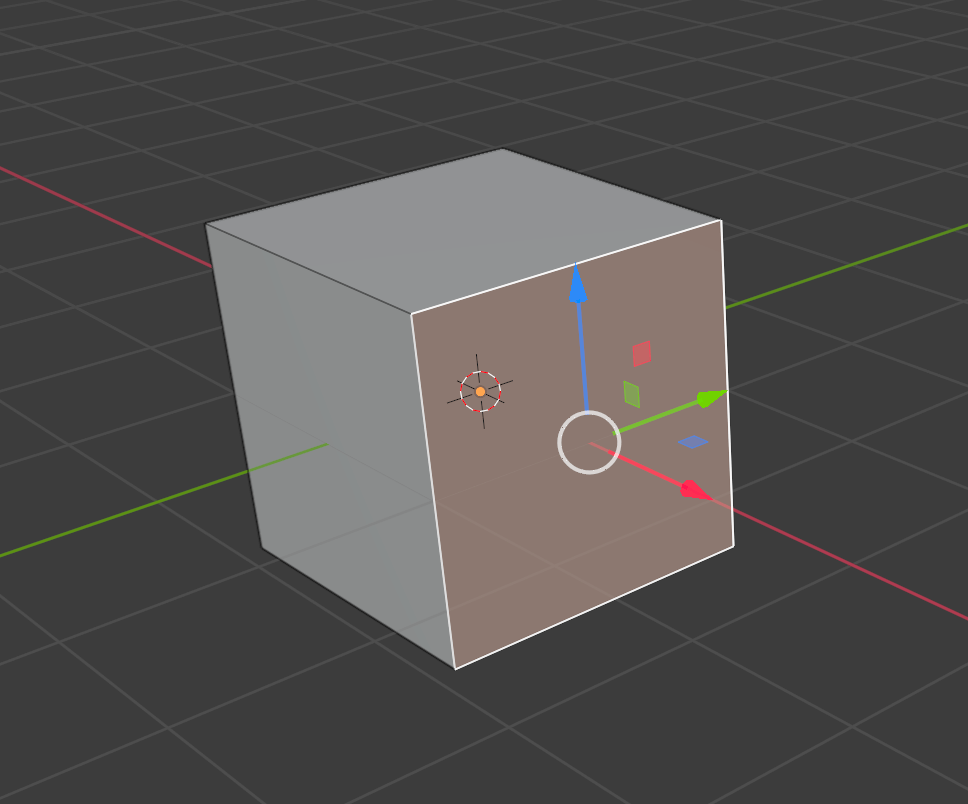 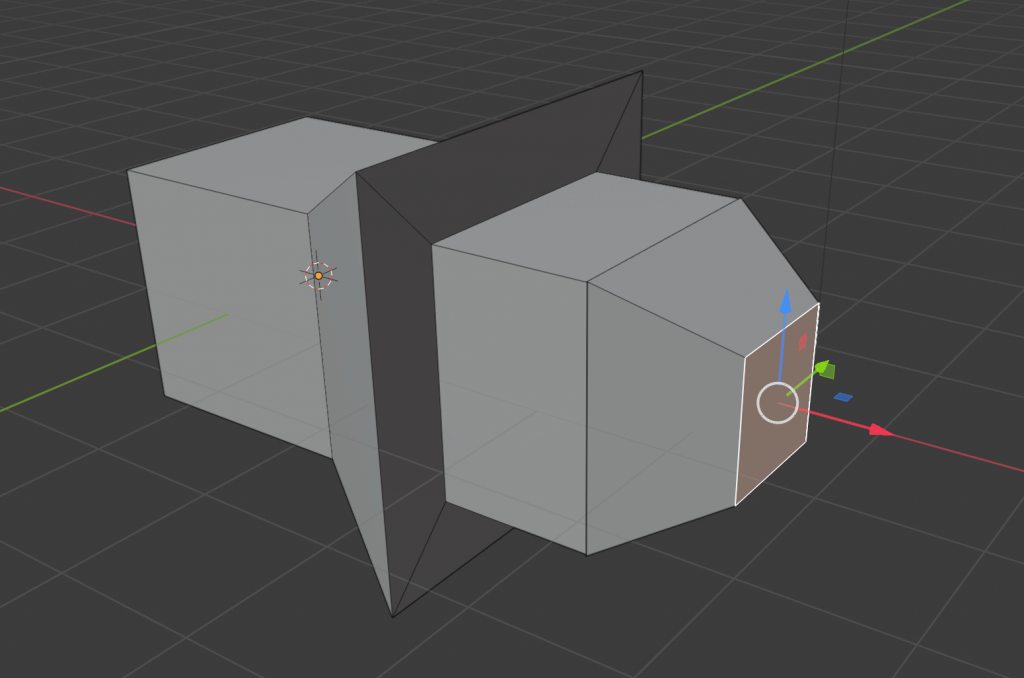 Extruding more surfaces, points, and lines like this is called Extrude. Basically, modeling is done by using Extrude to increase the number of faces, scaling, and moving repeatedly. Not only faces, but also points and edges can be extruded and moved in the same way.

Now let’s go into object mode by pressing the [Tab] key. The new faces and other objects created in Extrude are now all in one object. Press the [X] key to delete everything you just created.

Modeling a duckling and a potty

Go to Add>Mesh>Cube on the menu bar to bring up the cube. Press [Tab] key to go to edit mode, and use Extrude as in the previous exercise to make it look like the picture below. Even in edit mode, you can use the [S]→[X] key to change the scale of the X axis, as described in the previous article. So, if you want to change the scale of the X axis of the extruded surface immediately, press [E]→[S]→[X] key and then move the mouse.

The way to do this is as follows.

Is it done? Next, before drilling the pothole, select the wrench mark from the menu on the right, and then select “Subdivision Surface” from “Add Modifier”. The function to be added from the tab of the wrench mark is called a modifier. 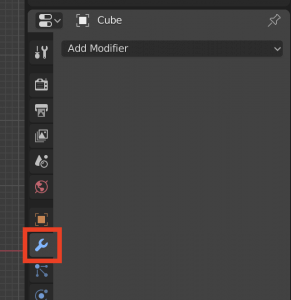 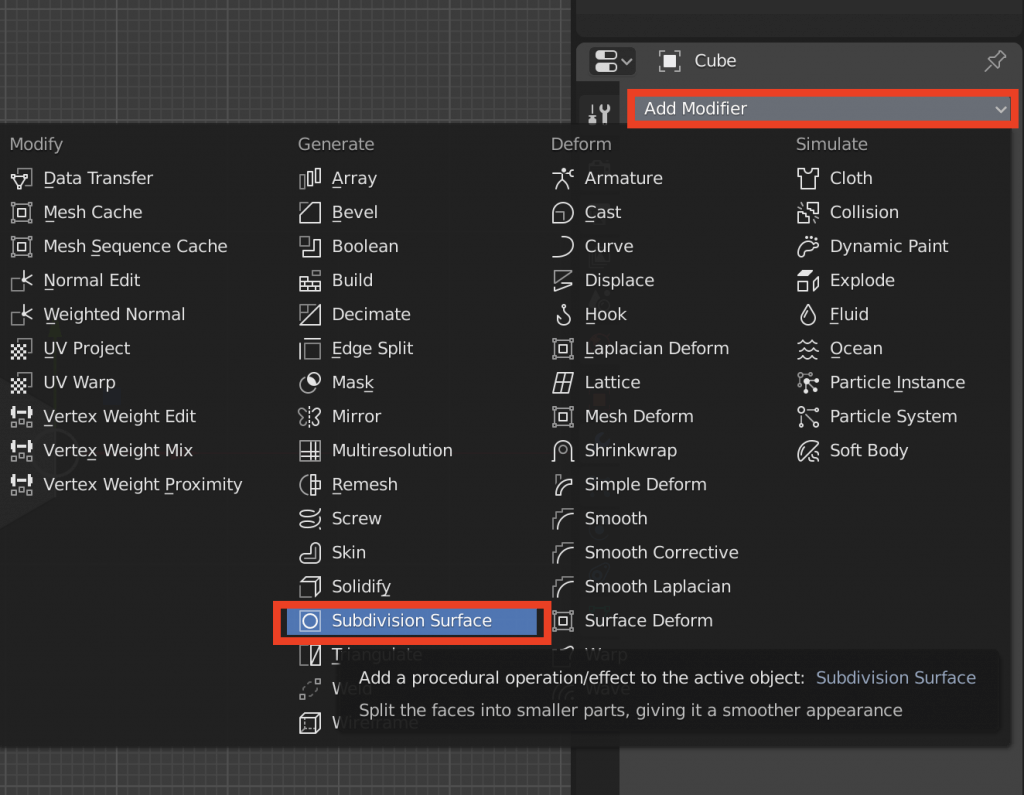 The number in the Subdivision Surface “Viewport” determines the roundness of the duck’s body, but as the number of polygons increases, you need to stop at 3 or 4 at the most or it will become very heavy. Do not press “Apply” yet. If you press “Apply”, it will become a decision, so press it last. 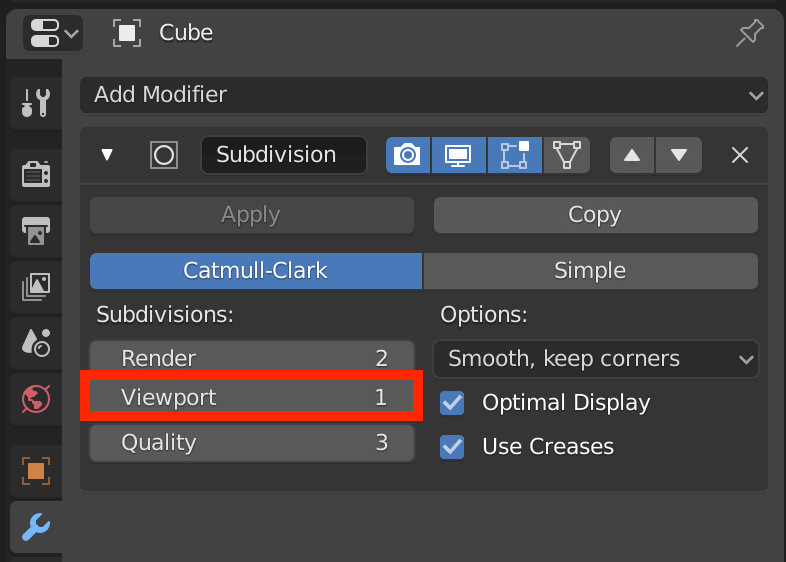 Set Viewport to 3 and switch to Edit mode. The editable points, lines, and planes will remain unchanged since we have not applied them. Now select the three surfaces above.

Make the three faces smaller by pressing [E]→[S], and then push [E]→[Z] to make a hole in the potty.

Incidentally, this process of creating and resizing faces with the [E]→[S] keys can actually be done by simply pressing the [I] key, which means Insert Faces. However, the [I] key does not allow you to change the size of the X axis.

The holes are too smooth, so let’s make them a little more crisp. Set the Viewport of the Subdivision Surface to zero to make it easier. Then, from the menu bar below, select Point, Line, Surface, and then Line, and select the line for the hole.

If you want to select a line all the way around, hold down the [Alt] key and select one line. This can also be done for points and surfaces. Once you have selected the line as shown above, select “Bevel Edges” from the menu that appears when you press [Ctrl]+[E] and move the mouse to drop the corners a little. The width should be about the same as the following picture.

Now change the Subdivision Surface view back to 3. The smooth hole is now sharp.

The hole is now sharp

In Subdivision Surface, the narrower the sense between vertices, the sharper the shape, and the farther apart, the rounder the shape. The bevel itself is originally intended to drop the corners, but it can also be used in this way since it creates new lines. In edit mode, it is sometimes difficult to see the whole picture, so switching to object mode makes it easier to see.

In the previous article, I actually used this bevel function by adding it from the modifier. When added from a modifier, the bevel is applied to the entire object. If you select a line in edit mode and do it from the [Ctrl]+[E] key menu, you can bevel only the selected line.

We’re almost there. The next step is to create the head. Switch to face selection and create the shape by extruding the faces in this area. 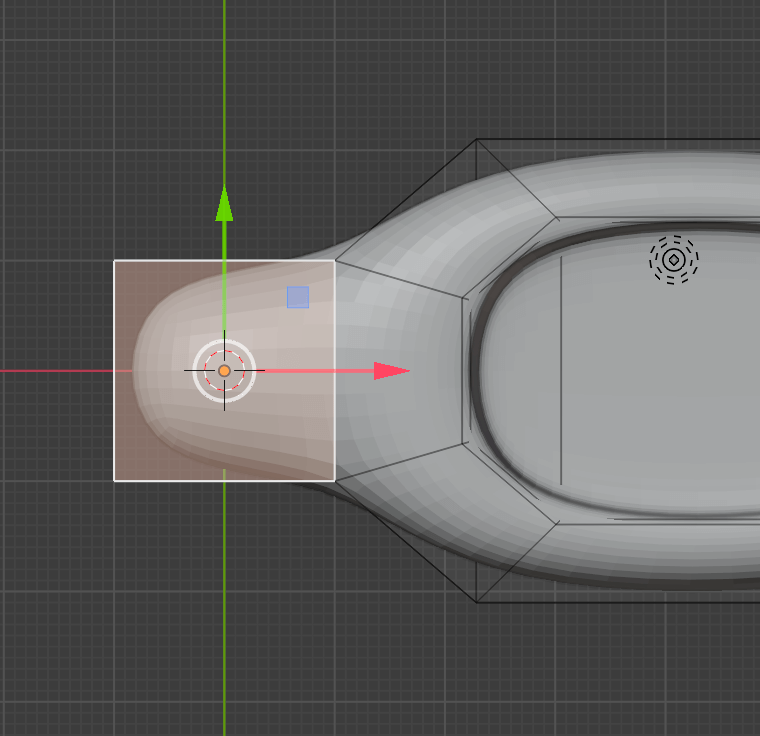 Creating the head with the faces in this section

The finished shape is shown below, and you can use this as a reference while using Extrude to create the head. 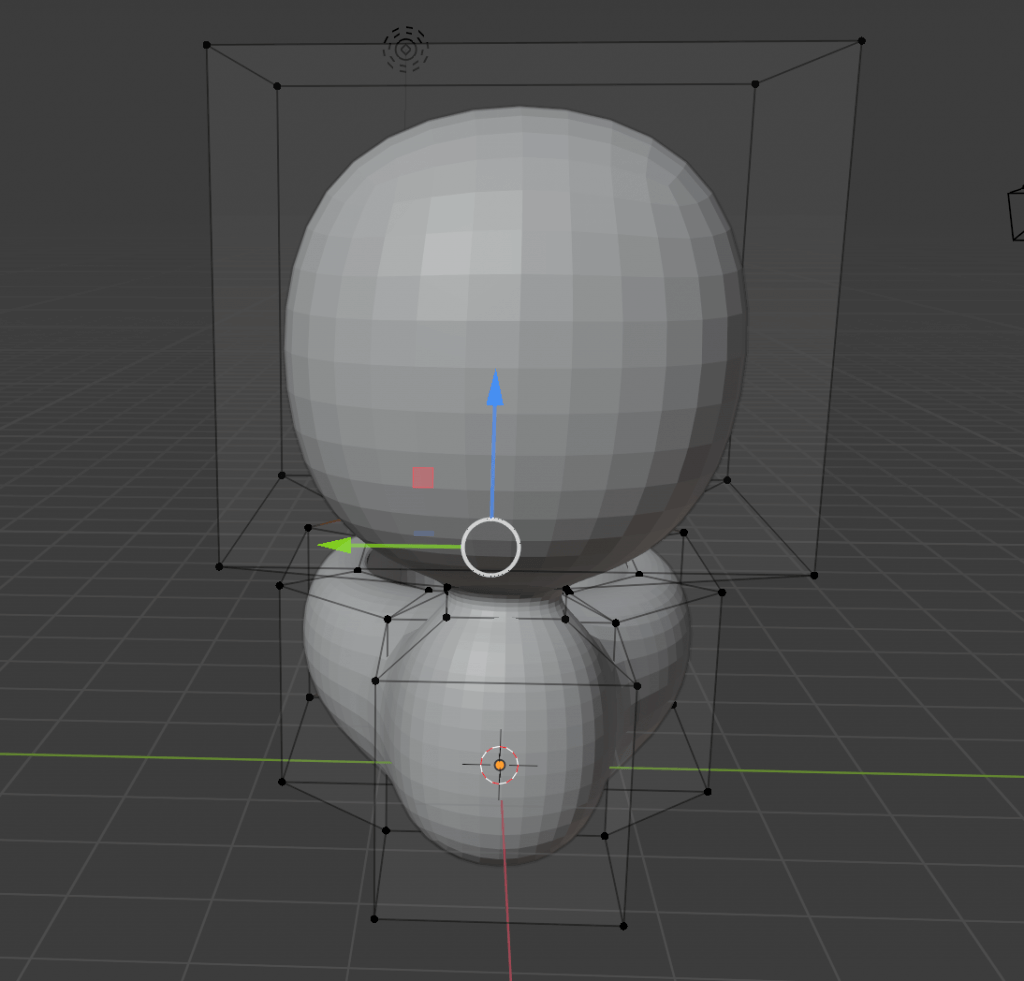 Shape of the head, finished form

After that, you can adjust the lines and surfaces as you like while looking at the whole picture. 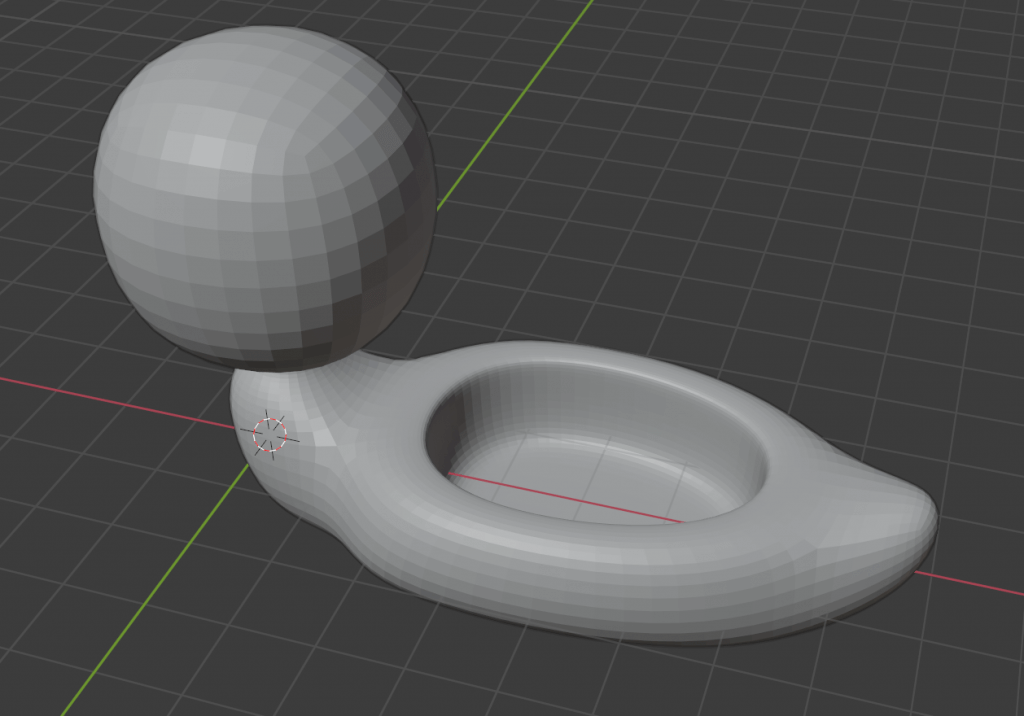 The shape is ready

The shape is now ready. Don’t press Apply Subdivision Surface yet. That’s all for now.

In the next article, we’ll talk about eyes, mouth, coloring, etc.

Next article is here