In recent years, a variety of VR content has been created, but VR content tends to be completed in the virtual space.

I thought it would be interesting to have VR content that connects to the real space, that influences the real space while being in the VR space.

So I thought it would be interesting to have VR content that connects with the real space, and I created the Red Bull VR Stand, where you can experience the VR space while drinking Red Bull.

How it looks on Oculus Quest

In this article, I’d like to introduce what I thought about in making the Red Bull VR Stand, which was actually exhibited, and how it was made. 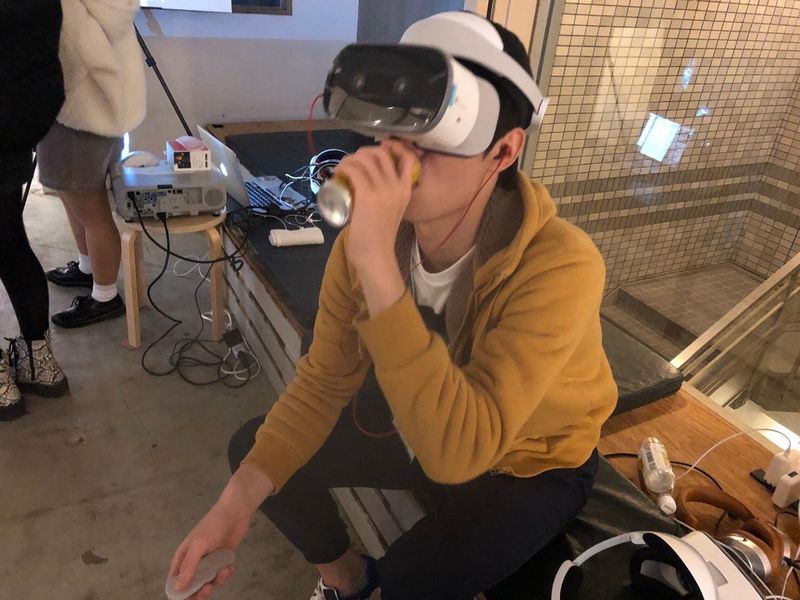 As I will explain later, we created three spaces for the Red Bull VR Stand.
We used three flavors of Red Bull: Normal, Suger free, and Yellow, so we created VR spaces for each flavor.

You can experience each space from STYLY Gallery.
We hope you will enjoy the experience while drinking Red Bull.

What is Red Bull VR Stand?

First of all, I’d like to explain about Red Bull VR Stand.

Red Bull VR Stand is an experiential content based on the concept of “ingesting a kick-ass VR space“.

We exhibited it here.

It is a VR content that allows you to have an unprecedented “cool” experience by drinking Red Bull in a “cool” VR space.
You can drink Red Bull while experiencing the VR space created by STYLY.

In this article, I would like to introduce how to create VR contents that are connected to the real world and what I thought about it using this Red Bull VR Stand as an example.

In this article, “VR content that is connected to the real world” refers to content that does not complete the experience only in the VR space.

The only tools used were STYLY and Unity.

There are four main things to consider when creating VR content that is connected to the real world.

It will be easier to create if you consider the above in order. Of course, the order may change back and forth.

You may go through the same steps several times, so there is no need to be rigidly bound.

Sometimes you need to think of them in parallel, so you can use them flexibly.

In this article, I will explain each one in order for the sake of explanation.

The first thing to consider is the concept.

This is the concept, after all.

Think about what kind of VR content you want to create and what you want people to experience.

You may start with what you want to achieve, or with a light-hearted desire such as “I wish something like this existed.
For example, “I want to take a bath with a spectacular view,” or “I want to drink beer at the top of a mountain.

The Red Bull VR Stand was inspired by the experiences of several art students who have been driven by the need to “get kicky” when they want to go the extra mile or explode their creativity.

How it looks in 0culus Quest

The conceptual decision here is quite important.

It will guide the design of the VR space, the exhibition space, and all of the experiences we want our customers to have.

The concept should be able to be expressed in one word.

In this case, it was “ingest a kickass VR space.

It is okay to be vague at this point, as the concept may become clearer after the next step, which is to determine the real world objects.

Decide on the real world objects

Once the concept is decided, the next step is to think about the real-world objects that will be connected to the VR content.

In this case, I associated Red Bull with the word “kimaaru,” but if you are creating a VR footbath, for example, you may want to prepare actual hot water.

At this point, make sure that the objects in the real world and the concept of the VR content are consistent.

Since the visual and auditory senses have been hacked by the VR goggles, you can create a new experience by further hacking the sense of touch and taste.

Since the concept of this project is to “ingest a cool VR space,” I thought I needed a “cool” object, so I searched for a “cool” object in the real world.

This led me to Red Bull.

Next, let’s think about the core experience.

The next step is to think about the core experience that this Red Bull VR Stand will provide.

The VR space itself contains a lot of information, so if the core experience is not defined, the experience will be a vague “I did some VR” experience.

In the case of Red Bull VR Stand, we decided on “drinking Red Bull in a cool VR space” as the core experience.

During the creation process, it is tempting to add “this and that,” but we focused on creating the core experience and cut down on unnecessary things.

Now that the concept, real-world objects, and core experience have been determined, the next step is to determine what role the VR content will play in the real world.

The next step is to think about what role the VR content will play in the real world.

Since people will be experiencing it, we want them to have some kind of change in their thinking and values before and after the experience.

We thought about what this Red Bull VR Stand means to society and how it can change the sense of values of those who experience it.

There may come a time when we use VR to turn on the switch when we need one more push or when we want to explode our creativity.

There may be a future where we can amplify the power of “getting off” by ingesting the VR space with Red Bull.

I hoped that this would be an opportunity to think about such things.

Therefore, we thought that the Red Bull VR Stand would play a role as an “opportunity to imagine when VR enters our lives.

Thinking about the design of the VR space and exhibition space

Now that the above four points have been determined, we will actually create the VR space and exhibition space.

When creating the VR space and exhibition space, we will try not to deviate from what we have decided in the above four points.

The same goes for the design of the exhibition space, which should not deviate from the above four points.

The design of the exhibition space is important because we want people to experience the connection between the VR space and the real space.

Unlike VR content, the exhibition space is the part that many people will see before putting on the HMD, so we design it so that they can understand the concept just by looking at it.

At this time, we check the connection between the objects in the exhibition space and the VR content to make sure it is not broken.

For example, for the Red Bull VR Stand, we created a neon-like sign to remind people of the “cool” experience and the store as an object in the exhibition space. 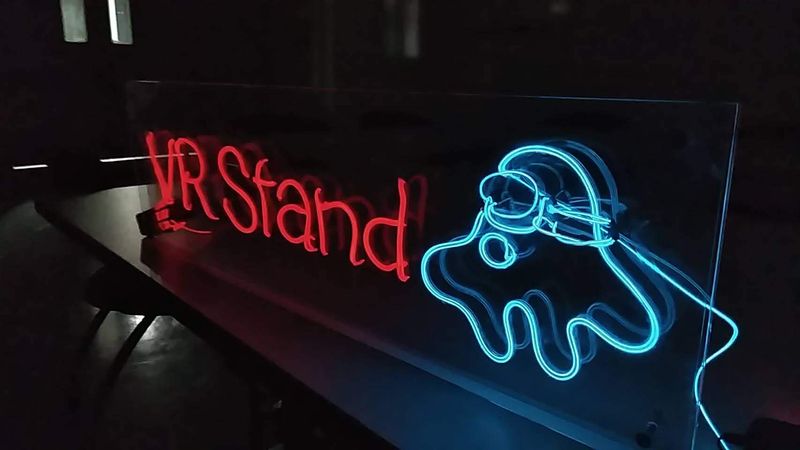 It is difficult to arrive at a finished product in one shot, so we repeated prototyping.

Presentation at the exhibition

The work completed in this way will be exhibited.

When we exhibit the work, we make sure to organize the operation.

For example, when to teach people how to experience the VR content, when to have people drink Red Bull, and so on, so that the concept can be conveyed and people can enjoy it.

In this case, we wanted people to drink Red Bull at the beginning of the experience so that they would be in a good mood before starting the VR content experience and drinking it throughout the experience.

Operations have a great impact on the satisfaction of the experience, so we make sure to build them into the VR content production equivalent.

We greeted customers as they walked by and encouraged them to try the experience casually.

We were also able to convey the concept and idea of Red Bull VR Stand. 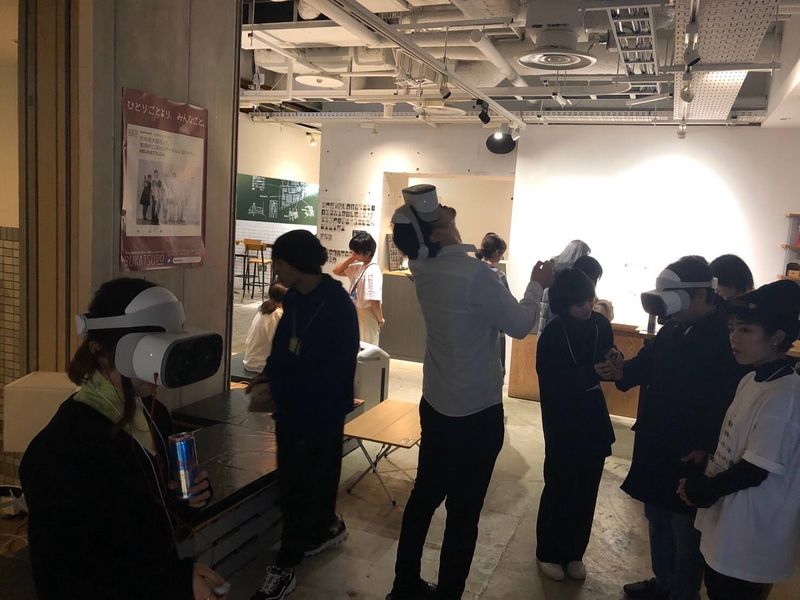 I felt that we were able to attempt to extend VR content, which is often completed within a virtual space, into the real world.

By connecting the VR space with objects in the real world, I felt that we could create a variety of expressions and experiences.

There is not a lot of VR content that connects to the real world yet, so there is a lot to explore!