As budget-price stand-alone VRHMDs such as Oculus Go have been released, VR is gradually spreading here in Japan.

Of course, there are various conditions to meet before spreading to end users, for example, downsizing the device, improving the specification and releasing some killer contents. However, can I say that VR has already got fairly close to the artists who express their art style?

A good example is Mr Tomoaki Seo who created a VR work, ‘Fever’. This VR work won the CINRA award at ‘NEWVIEW AWARD 2018’, a global award for VR contents in the fashion, culture and art field.

What did he intend to express by ‘Fever’? I will close in on his passion in this interview. 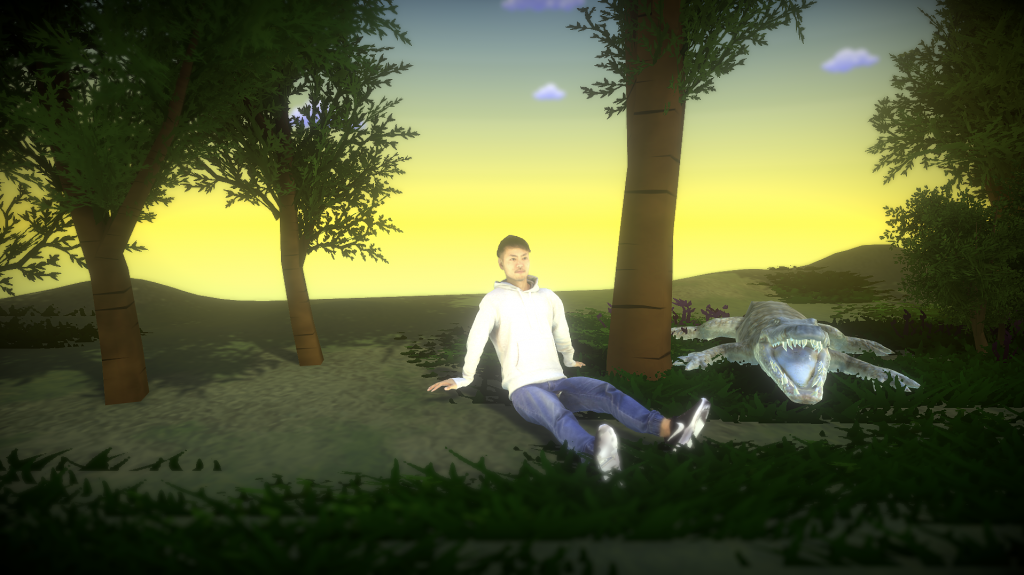 He mainly works on the UI/UX of websites and mobile applications at a production company. He currently acts as a creative technologist and interaction designer in a digital agency. He also reaches out towards ‘off-line’ activities such as project planning, prototpe development. In his childhood, he noticed that anything could be realized in his mind. Since then, he often indulged in imagination. As emerging VR technology made a paradigm shift that allows him to experience the imaginary world in real life, he cannot help being excited in these days.

Seo: Although I cannot remember what media it was, I learnt about it on the internet.

— What made you apply for NEWVIEW?

Seo: When I experienced Oculus Go, I realized that VR had already become something familiar.

Then I was thinking about creating a VR content by myself. At the very time, I learnt about NEWVIEW AWARDS and I decided to apply for because I felt it’s destiny (lol).

Seo: Because I already knew about Psychic VR Lab through my friend before, I have known about STYLY since it’s released.
In the beginning, it was a service for EC sites to embed the high-quality 3D models of merchandises, wasn’t it? I am surprised to see that it rapidly evolved into a VR platform as we can see now.

I am really sympathetic to the mission of Psychic VR Lab, ‘We realise the place where many people simultaneously live a multilayered world with reality and virtuality overlapped’, so I am looking forward to seeing the future development of  STYLY .

Render the ambiguity of reality and virtuality in modern society

Fever from STYLY on Vimeo.

— What concept is behind this ‘Fever’?

Seo: The concept is ‘Enthusiastic experience with a dystopia culture’.

On TV or SNS, we sometimes see people heating up in a turmoil such as a demo, riot, buzz, flaming. I found it has a similarity to dystopia, so I thought about how I could render this excited state in my VR work.

In addition, I found out this concept since I wanted my work to make people feel something like the ambiguity of the boundary between virtuality and reality in our information society.

— How did you make this VR work and how long did it take?

Seo: Firstly, I came up with some ideas of what world I create. In those ideas, the most interesting one for me was ‘A dystopia world’.

After I decided what to create, I set a temporary concept and started making the scene while learning how to use STYLY. I was finalizing the concept and story while polishing up the scene. It took me about a month and a half to make it step by step.

— Have you used a shader for the characters placed? Could you tell about the technical aspect of this space design a bit further?

Seo: Yes. I used a shader created with Shader Forge to make the characters shine.

This shader makes the light flash at regular intervals by using the Time node and randomizes where it shines (the position of ‘Emission’) by the Noise node. I also created the other shining objects with a customized version of the same shader. 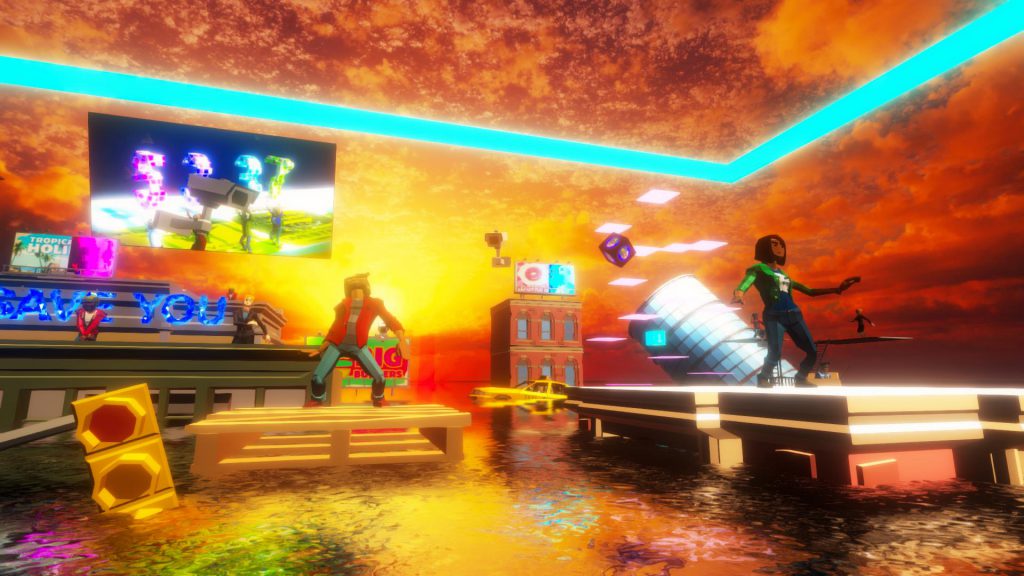 I made the announcement voice in ‘Fever’ by using Sound of Text, a service to convert text data into mp3 and save it. I finished the voice by applying an effect to the exported mp3 file with Adobe Audition.

Regarding the green box moving up and down around the shining pink staircase, I made it shine by the shader I mentioned earlier and animate it with the Animation tool in Unity. I made the explosion in the distance by using Unity’s particle system. 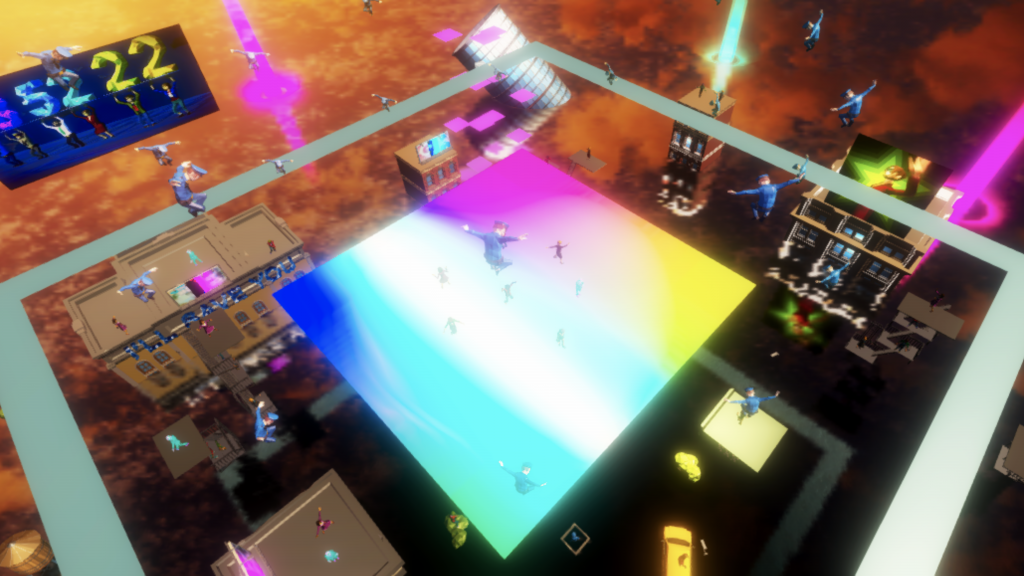 I created a lot of policemen in the air and underwater by following the sequence: place them in the Unity’s scene by a script; store the placed policemen into an empty GameObject; rotate them with the Animation tool and upload them to STYLY.

To create the video played in ‘Fever’, I exported some my past works made by real-time rendering method as video files, upload them to Youtube and import them into STYLY. 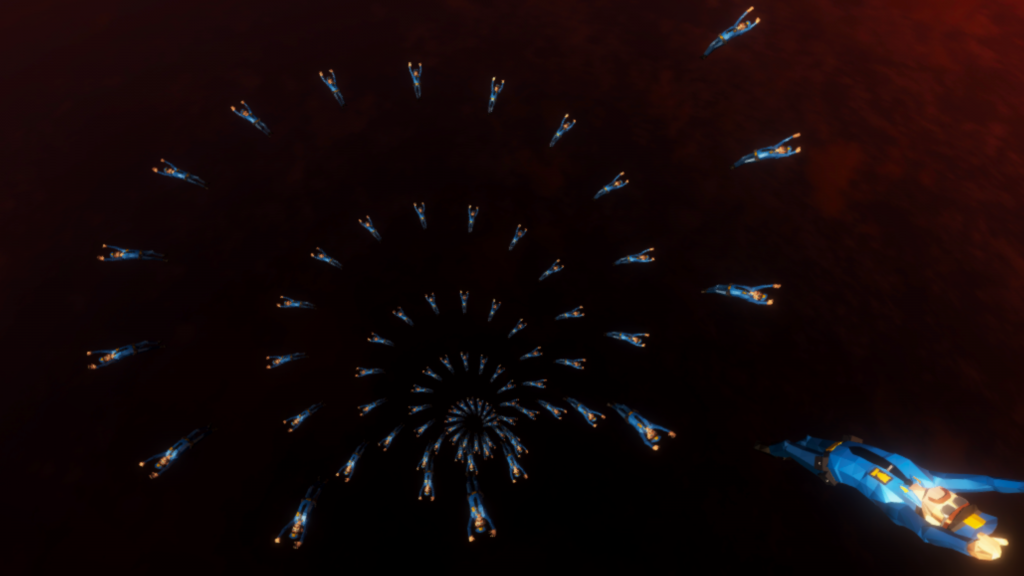 I imported the background music from SoundCloud to STYLY directly.

And, I used ‘mixamo’ to create the dance animation of the characters.

Explore the expression unique to xR

— Thank you. Could you also tell me what was difficult when creating this work?

Seo: It’s fairly easy to create a VR content with STYLY, so it didn’t take much time to learn it. However, it took time to figure out how far can Unity and STYLY work together because I wanted to use Unity mainly to spice up my VR work.

I tried shaders and 3D sounds. I also tried to write code with C# although I knew it wouldn’t work well. So I tried many ways so hard that I could almost find a cheat in STYLY.

In addition, at that time, STYLY didn’t support the fuction to upload the whole scene at once, so I needed to upload every 3D model separately and it took a bit more time to try something.

（Later, I found that I could do most of them with PlayMaker, so I was depressed a little. lol.) 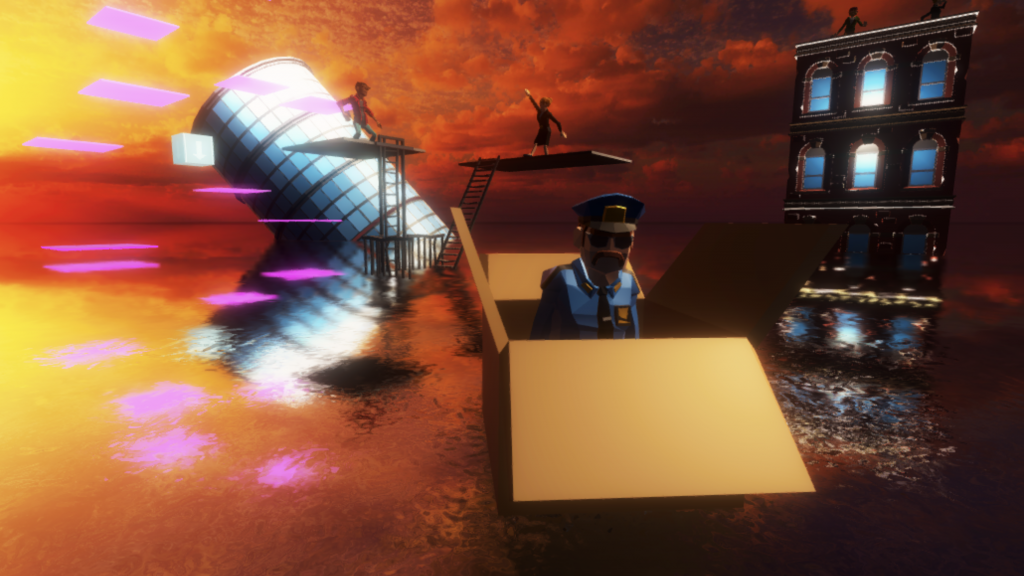 — What did you care about most when making this work?

Seo: I cared about how to translate the concept, ‘Enthusiastic experience with a dystopia culture’, into the atmosphere of the VR scene and the experience when people put on their HMD.

To produce enthusiastic atmosphere, in various places, I arranged the objects that make viewers feel the dynamic movement such as dancing characters, flashing signs, displays floating in the air, so that people feel the time is flying in ‘Fever’.

When creating a dystopia-like world, I repeated the tasks, ‘choosing the materials’ and ‘ combining them’ for the backdrop, buildings, characters, motions, sounds and etc. to get the world closer to what I  imagined.

Regarding the details, I thought things out to give more reality and presence to the scene. For example, I adjusted the textures of the buildings to give more depth and contrast to the scene and cast the light, which is created in Unity and uploaded into STYLY, over the leaning buildings to highlight.

After the scene in STYLY was built up to an extent, I polished it up while checking how the size and depth of the scene look with my HMD on and whether it can make people feel ‘enthusiasm’ or not.

— What is your future plan?

Seo: I think what VR can render is unlimited.

Making good use of this infinite possibility, I want to try creating new expression and experience unique to VR.

In addition, I hope to build a relationship with other creators through STYLY.

In next year, Oculus Quest, a stand-alone VRHMD that gives higher-quality VR experience, will be released.

Its price, $199 or $249, sounds cheaper than a smartphone, and the number of the launch title is expected to be more than 50.

As various VR devices are released year after year like this, not only developers but also artists will join in the development of VR contents.

‘Space design’ is a key to VR development. I wonder if artists could make up VR space in a better way.

Therefore, I think STYLY should lower the barriers to entry to VR so that more artists can design their VR space.

I am also looking forward to his next work.