We started our activities from announcement of NEWVIEW SCHOOL, hosted by Psychic VR Lab, Inc., where students will be able to learn VR as a total art form, will start in June 2019 in Tokyo and Kyoto and has already started recruiting students.

Our school is adopting a program to discover and train the next generation of creators as part of the NEWVIEW experimental project/community’s activities to pioneer new creative expression and experience design in three-dimensional space (VR). This program is linked to the NEWVIEW AWARDS 2019, the second edition of the fashion/culture/art VR content awards (details to be announced at a later date), numbering 219 entries from 7 countries around the world despite being held for the first time last year. We believe it will accelerate the development of new forms of expression and the expansion of the community.

The catchphrase of NEWIVEW SCHOOL is “Learning VR as the design of experience”. The NEWIVEW SCHOOL is a school where you can learn new forms of expression. We invite leading instructors from various fields such as art, music, architecture, and fashion to teach a curriculum that teaches diverse and essential ideas for VR expression with an aspect of integrated art. The course also includes a technical course on tools such as Unity, including STYLY, which is one of the most popular tools in the world, in order to train the next generation of creators. Students will create a piece of work to be entered into the NEWVIEW AWARDS 2019 as their graduation project. Instructors Mitsuru Kuramoto (broadcaster), Sou Otsuki (filmmaker) and Akihiko Taniguchi (media artist) will also serve as judges for the NEWVIEW AWARDS 2019.

*The photo on the right is from a past NEWVIEW event

Capacity:
30 participants in Tokyo and 30 in Kyoto

We will need you to purchase the software and other items required for some of the lectures, which are assumed to be less than 10,000 yen.

In addition to the lectures, there will be seminars to provide feedback for the creation of works.
Keisuke Toyoda’s seminar will be held as the noiz seminar.

Curriculum and Schedule:
This curriculum consists of a basic course, a guest course, a technical course and a seminar.
*The content and schedule are subject to change.

8/3 (Saturday) @ Tokyo and Kyoto
Guest lecture: Visuals (to be announced later) / Technical lecture: Writing with Unity and Playmaker / Feedback time in each seminar

He has been involved in a number of TV programs including «The Art of Shouting Ah! Rt», a children’s program on NHK E-telephone, “Shakin!», “Downtown DX”, “M-1 Gran Prix”, “Manga classes of Urasawa Naoki”. His works include “Downtown’s Gotttsu Eeiken”, “Itoke no Shokutaku”, “Takeshi no Banbutsu Soseki”, and “EX TV”. He is the author of “The Language Book: Tomorrow’s Carta”, “Kuramoto Mitsuru’s Super Japanese Dictionary” and “Laughter Theory: Making 24 Hours Interesting”.

He crosses “a wide range of production techniques” with “oblique inspiration” to create works that are consistent with pop culture. In recent years, he has been specializing in video production using pixel art, and has been active mainly in commercial video production such as music videos and advertisements. His recent works include Southern All Stars “With all love for the fighting warriors” music video (recommended by the judges of the 22nd Japan Media Arts Festival), YUKI “Yatara to Synchronicity” music video, UNIQLO “UT x STREET FIGHTER” AD, and an original work, “Idiot Runnings” (15th Japan Media Arts Festival). (Art Festival Jury Nomination). With Ian Shimizu, he runs NEWW, a creative team specializing in environmental issues.

Born in 1972 in Chiba, Japan, he graduated from the University of Tokyo with a degree in architecture in 1996-2000, and worked for Tadao Ando Architecture Institute before receiving his master’s degree from Columbia University in 2002. He co-organizes the design office noiz with Cai Jiaxuan (with Kosuke Sakai as a partner since 2016). He is actively involved in design, production, research, consulting and other activities that incorporate computational design in a multidisciplinary manner, from architecture to product, urban and fashion. He is currently an assistant professor at the National Chiao Tung University in Taiwan, an adjunct instructor at the Art and Media Center of Tokyo University of the Arts, a lecturer at the Digital Design Studio of the University of Tokyo’s Department of Architecture, and an adjunct instructor at Keio University’s SFC.

Born in 1989 in Japan, he spent his childhood in the southern hemisphere. After moving from Kyoto Seika University to Utrecht University of Art and Design, he became a member of the Dutch media art collective Born Digital. He has worked as an artist at festivals across Europe, and since 2016, he has been a member of CEKAI as a technical director. Based in Kyoto, he works on video direction and interaction design for various clients.

Born in 1990. Image designer and filmmaker. After graduating from Kyoto Seika University, he worked as a freelancer and joined CEKAI. With visual development and motion design being the core of his work, he has worked on opening of theater productions, artworks for theatrical productions, visual design for installations, VJ and production systems, and video works. In recent years, he has been involved in the design of video exhibitions such as “manga ⇔ tokyo”, a large-scale international exhibition. His representative works include the opening of The Dragon’s Dentist and the animation of MIZKAN MUSEUM’s Toki no Kura.

Born in Tokyo in 1980. Graduated from the Post-Graduate School of Media and Governance at Keio University. His main activity is to research and develop new expressions based on human perception and propose them to society using various media. His main artworks include NHK E-TV’s “2355ID / 0655ID”, concept research for 21_21 DESIGN SIGHT’s “Unit Exhibition”, and exhibition director for 21_21 DESIGN SIGHT’s “Athletes Exhibition”. He is the author of “Difference” (co-authored with BIJUTSU SHUPPANSHA), “Gaze” (Voyager), “Behavioral Economics Manga: Hentekonomics” (co-authored with Magazine House), and “Practice of Observation” (NUMABOOKS). Major awards include the D&AD Yellow Pencil. Full-time lecturer at Tama Art University’s Department of Integrated Design. 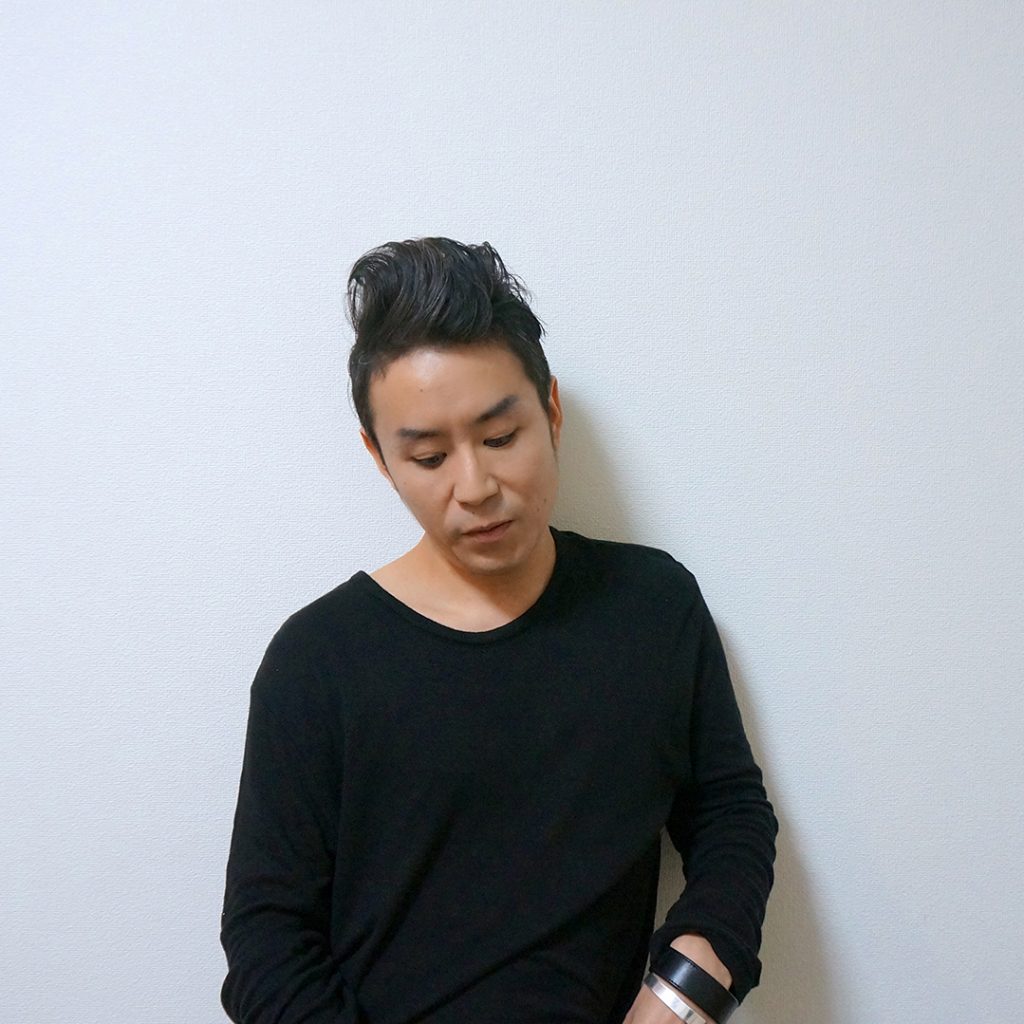 He has been presenting his cutting-edge electronic music works in Japan and abroad. Making full use of the 3-D sound system as a new musical instrument, he started a project “See by Your Ears” in 2016 to create a new auditory experience. He has constructed a phenomenon in which sound behaves dynamically like a living organism and presented “spatial composition” as a new musical technique. His most notable works include “Fox with Big Ears” (Sonar+D, Barcelona 2017) and “Our Muse” (ACC, Gwangju Korea 2018), as well as the 576-channel sound installation “Acoustic Vessel Odyssey” (SXSW, Austin 2018). He also produces a variety of sound for stage, film and public spaces using cutting-edge technology.

Born in 1987 in Hiroshima, he studied couture techniques and three-dimensional cutting after moving to France in 2006, and established HATRA in 2010 to propose garments as a portable space where one can take the sense of security like a “room” outside. Currently, through the practice of the 3D cloth simulation software “CLO”, he is exploring new ways of body expression. His major exhibitions include “Future Beauty – Futurability of Japanese Fashion” and “JAPANORAMA.” He received JFLF AWARD in 2018.

■The candidates
The artworks submitted for this competition shall be VR contents created and published using STYLY, a creative platform for creating new ways of expression and experience using the VR space. The use of non-STYLY tools (3DCG, game engine, DAW, etc.) in the production process is acceptable. You can submit your artwork even if it has already been published.

NEWVIEW started up in January 2018 as an experimental project and community that develops the design of innovative creative expressions and experiences in 3D spaces. It experiments with the design of next-generation culture and lifestyle that cross the lines of fantasy and reality, along with creators who embody urban culture such as fashion, music, movies, graphics, and illustrations. He discovers, trains, and interacts with next-generation VR creators through domestic and international lectures and meet-ups.