This article introduces the VR work ne.mui by Ono Natsuki, a 2019 NEWVIEW AWARD finalist and winner of the SILVER and PARCO PRIZE awards. Information on how to view the work is provided at the end of the article.

This work questions the “network of the unconscious” and its boundaries, allowing visitors to experience abstract and philosophical concepts in VR while crossing the boundaries of six different spaces that can be divided into six major categories.

What is the “network of the unconscious,” as the artist calls it? And what are the boundaries there? 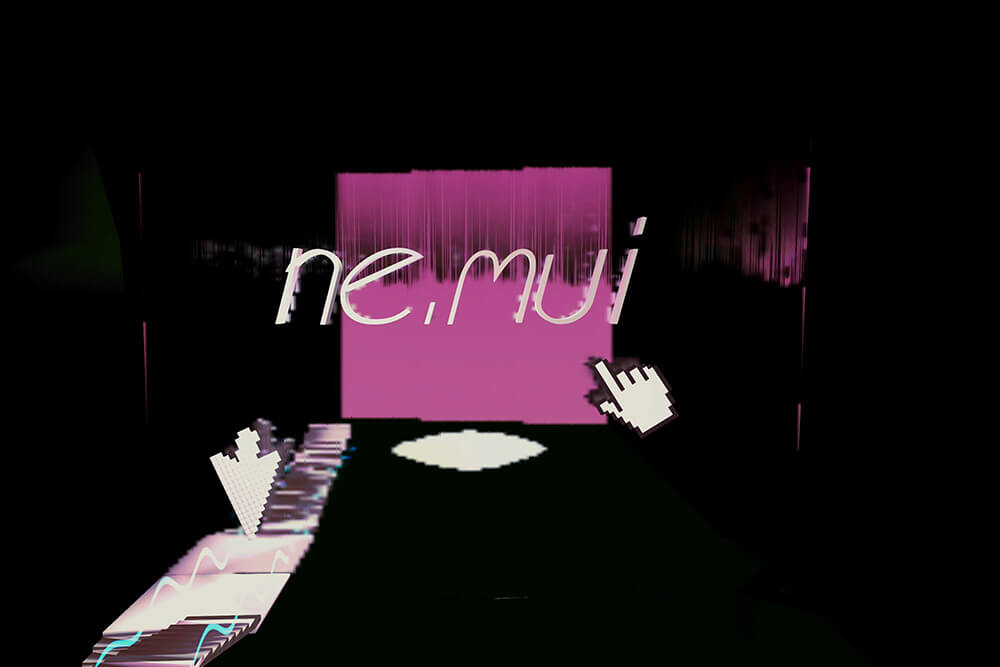 The first thing you see in the space is a large title and cursor. As you wait in that entrance-like place, you hear a heavenly voice. Human and machine voices begin to talk about this world, overlapping each other.

The title of this piece is a word for “network of Mui,” which can also mean sleepiness if read continuously. Mui means unwillingness, unintentionality, and unconsciousness. It may be obvious, but I still cannot help but wonder how each person’s world is constructed according to their distance from each other and what they see.

Since we are born in human form, we have our own world.

If it is sound, we cannot hear it if we are out of range of its frequency, and if it is color, we see the world individually depending on the way our eyes are made. I wanted to express how sounds, visuals, and all kinds of information are connected to the space of this world by swirling sounds, such as what it would sound like if all the sounds in this world were heard at the same time.

The foundation of my work is boundaries, and ever since I was a teenager, I have been thinking about what differentiates or separates the world I see.

Nowadays, with the Internet, we can easily obtain information even from the other side of the world. On top of that, I would like to reexamine what VR space is through this kind of thinking, and through my work, I ask the question: “Who is talking now?”

Hey, who is speaking now?

It is true that each of us sees the world differently, even if we think we see the same world. This work attempts to depict the world, of which each of us is conscious and aware. It also seeks to illustrate the connection to the world outside that world in the state of “unconsciousness,” based on the boundary line between the two. By constructing this mysterious sensation in a VR space—which the artist has been ruminating over for a long time—the work also questions the boundaries of consciousness inside and outside of VR, as well as space itself. 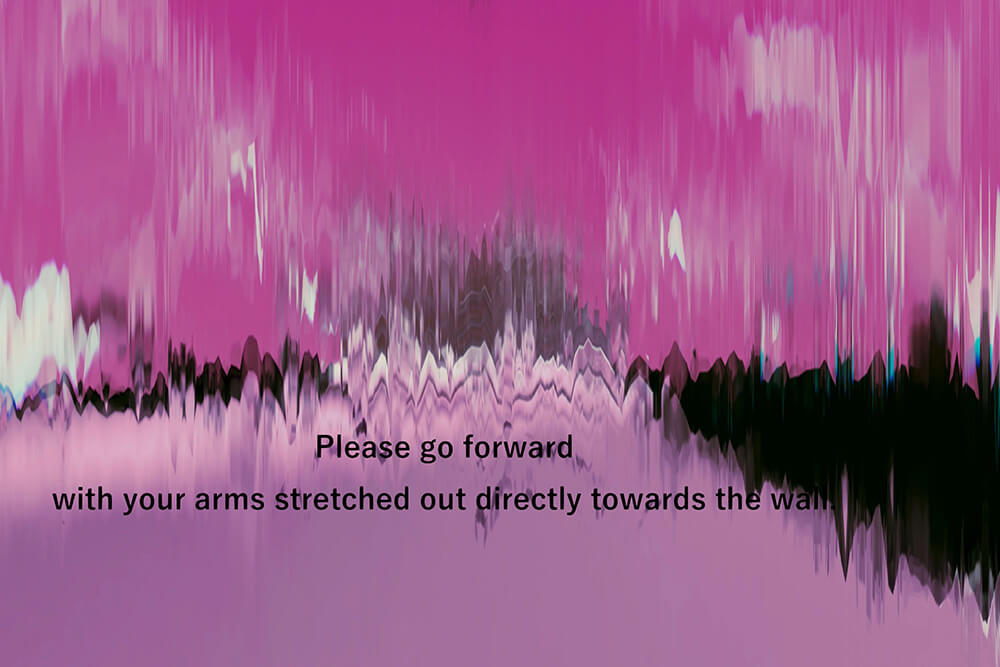 As you follow the path, a blurry membrane-like object appears in front of you. This seems to be the boundary that separates this space from that space. 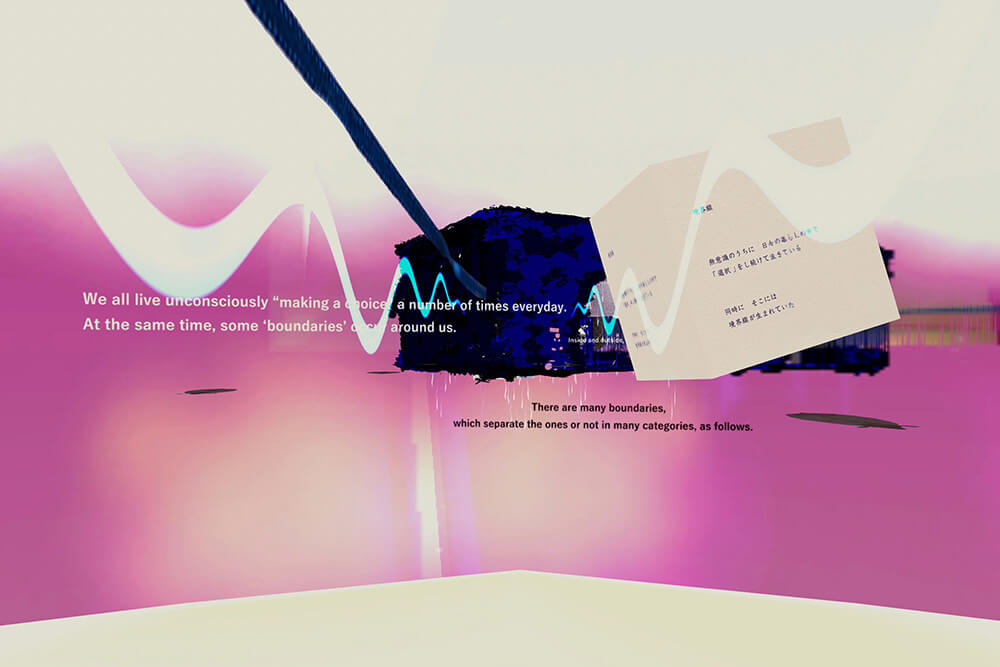 Passing through the membrane of the boundary, a completely different space opens. It contains a rotating cube with a poem written on it:

Unconsciously, in our daily lives

We make choices in our daily lives.

At the same time

Boundaries are born there. 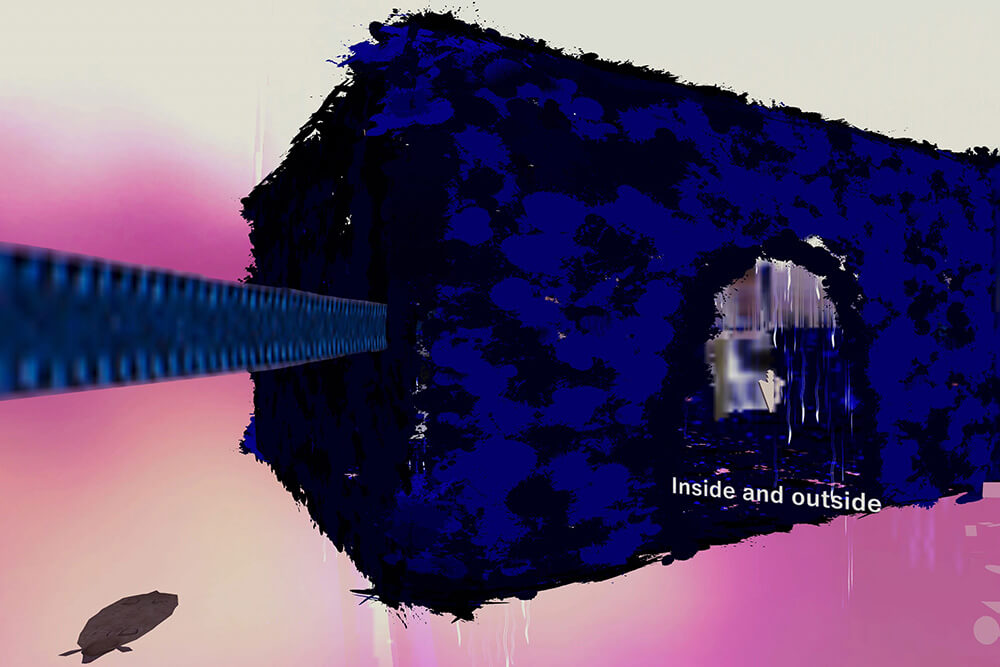 A long band of what looks like analog film leads to a room. 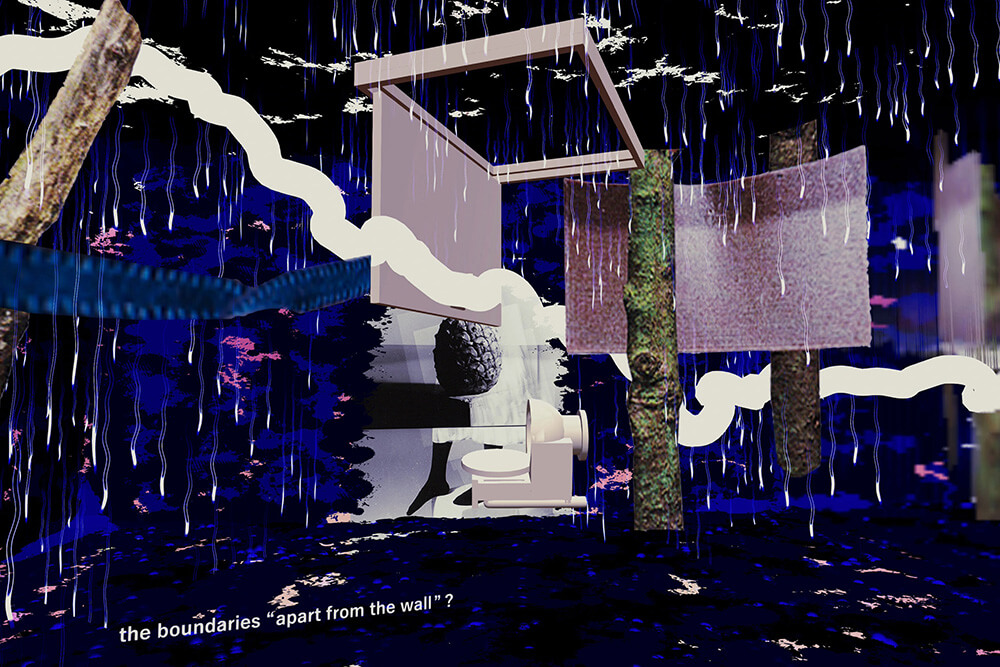 A toilet bowl appears, which rotates in a space that resembles a private bathroom. Statues of bodies, pinecones, tree trunks, a door on the ceiling, and a flowerpot that moves vigorously like a rocket appear. Countless white objects pour down like rain.

What is another boundary than a wall?

You will immediately agree with this question. Surrounded by objects that defy the laws of gravity in a space that has no boundaries in the form of walls, you are not sure where you are, and you do not even know if there are boundaries or not. You gradually lose your sense of direction in this disorderly space, but a white line crossing the center of the screen points you in the direction you are going. 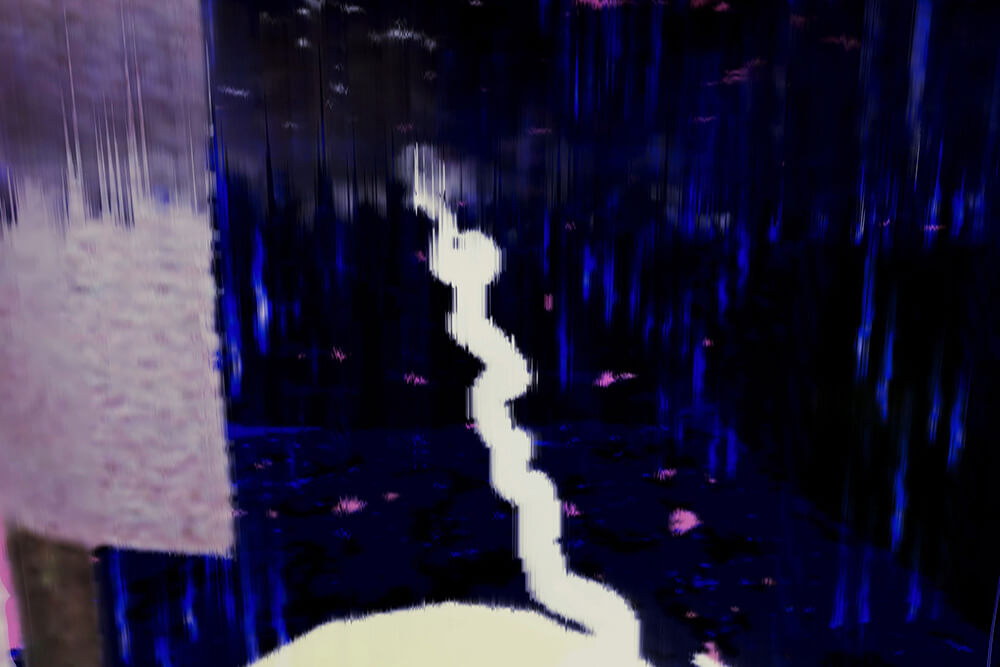 The boundary to the next space appears before you. 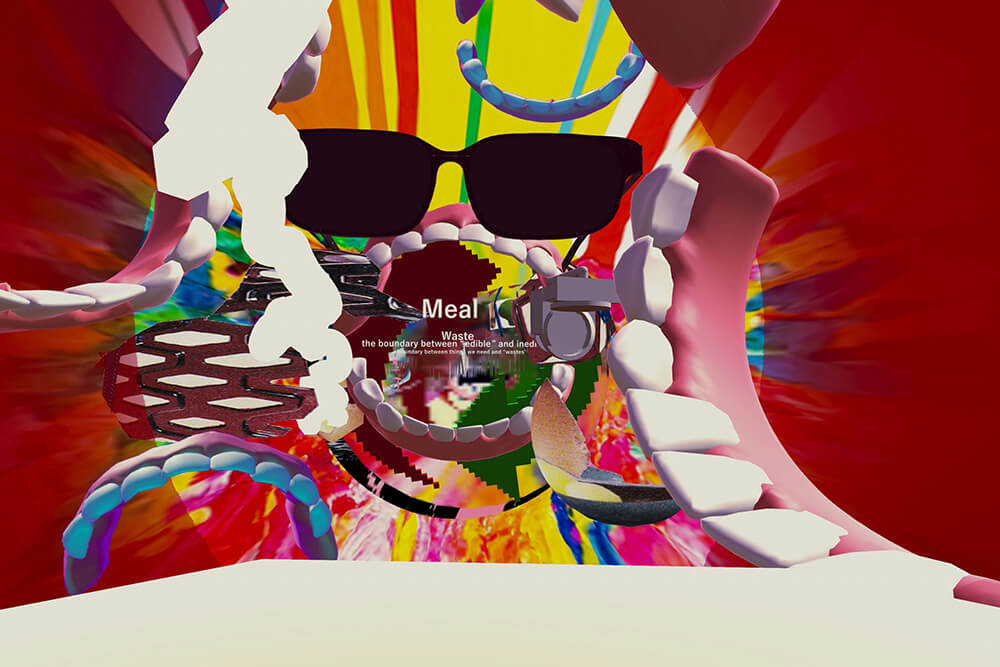 In the next space, surrounded by a multitude of colors, sunglasses and teeth move strangely and repeatedly to the music.

The questions posed while moving through the esophagus-like tunnel, coupled with the sensation of food being digested, allow you to experience the feeling of seeing the world from a completely different point of view. Perhaps that is the “unintentional” world that lies beyond one’s usual awareness and perception.

In this way, the artist questions the boundaries of various things, drawing the viewer into a world composed of unique colors, objects, and animations, and directly appealing to the senses. Seemingly unconnected, yet completely different spaces are consistently connected through what the artist calls “a network of unintentionality.” By repeatedly interrogating these different spaces in succession, the viewer can experience the world of “unconsciousness” and its connections in a virtual space that was previously outside his or her awareness. 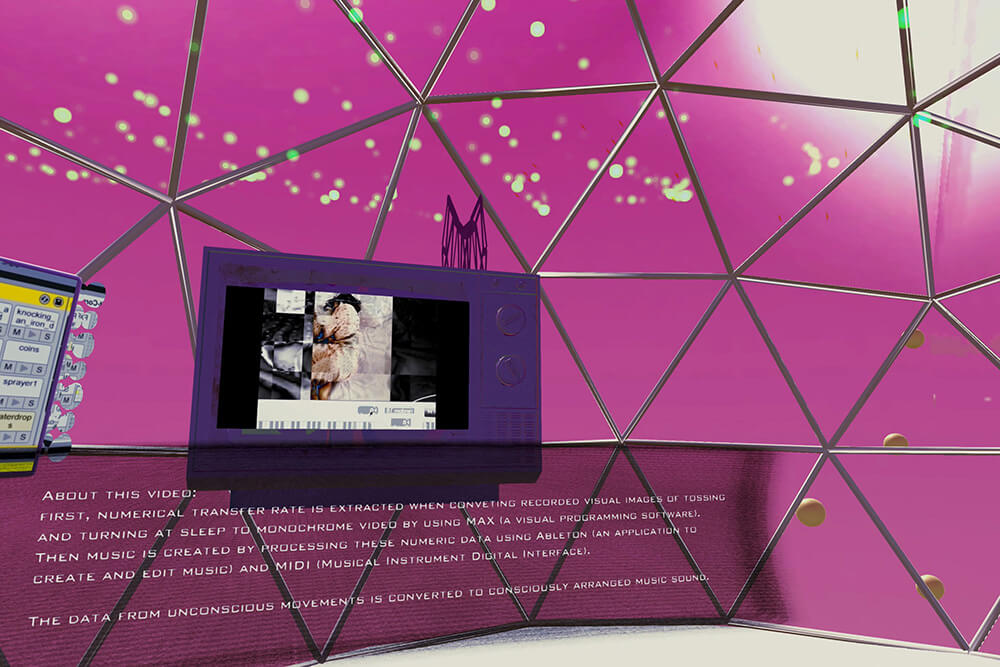 In another space, images and music play. Recorded images of the artist sleeping appear, and numerical values are extracted from the images each time she turns over. Unconscious movements are converted into consciously arranged sounds. 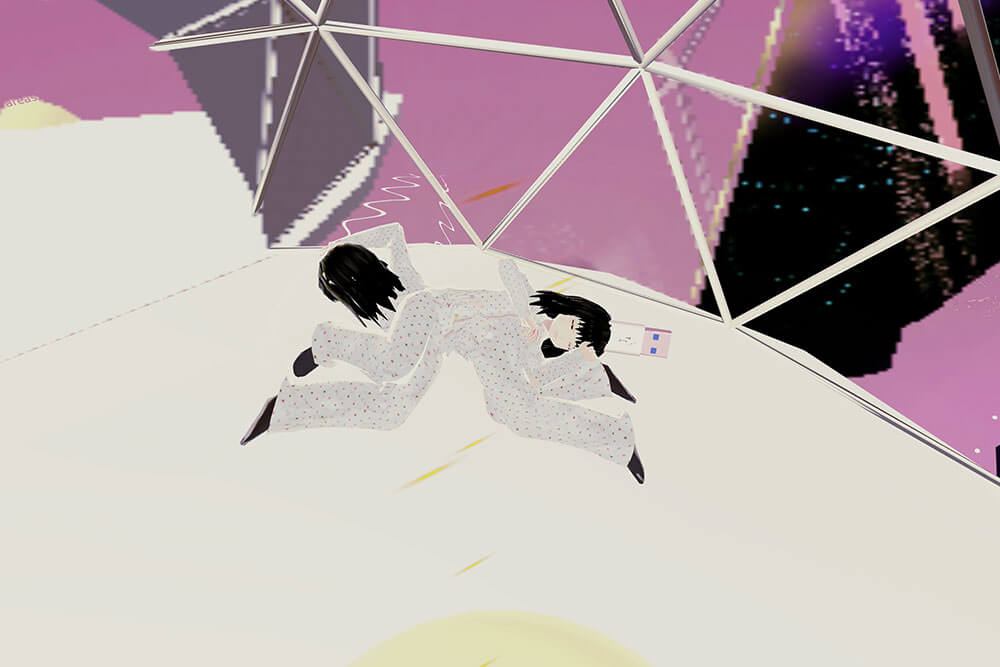 In the same space, the author’s avatar is sleeping. The two bodies repeatedly overlap and then separate. This reproduces unconscious movements, such as turning over and stretching while sleeping. At night, when you are sleeping, you probably don’t turn over to the left thinking, “now, let’s lean to the left.” Movements that occur while sleeping can be described as unintentional actions.

The title of this work, ne.mui, can be interpreted as “sleepy.” When you are in class, at work, or on the train, you may feel sleepy and gradually become drowsy, or you may start to have strange dreams after you crawl under the covers at night and think about the next day. This may also be what the author means by “the borderline between consciousness and unconsciousness.”

Furthermore, in this space, the artist asks the question.

The world you see now

So where is your consciousness?

What defines the people in the VR world? 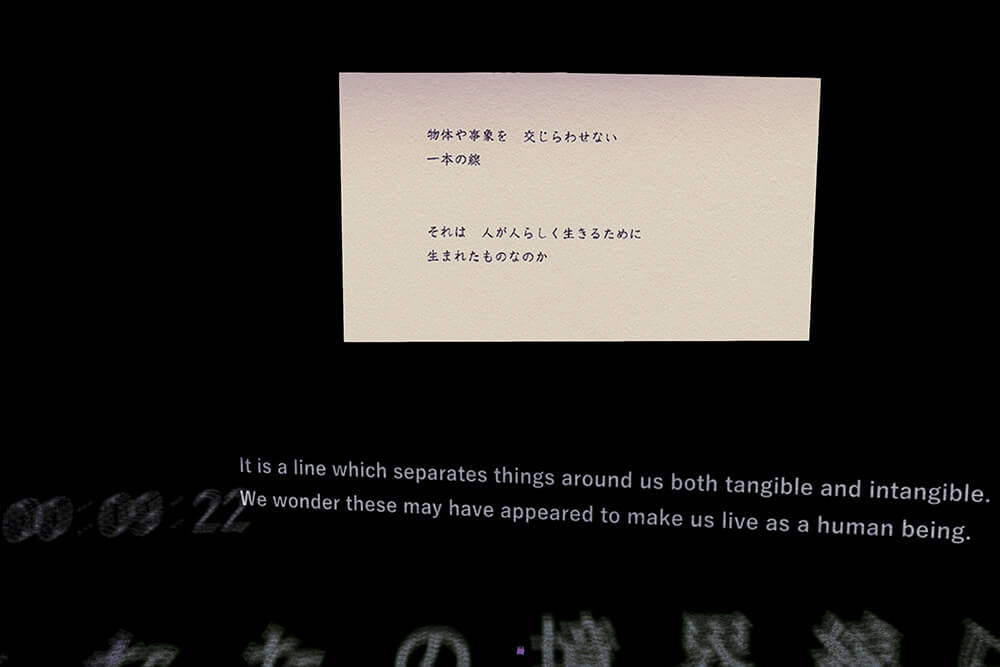 In the last room, where we arrive after experiencing and thinking about various boundaries, we ask about what the existence of boundaries means.

It is a line which separates things around us both tangible and intangible.

We wonder if these may have appeared to make us live as a human being. 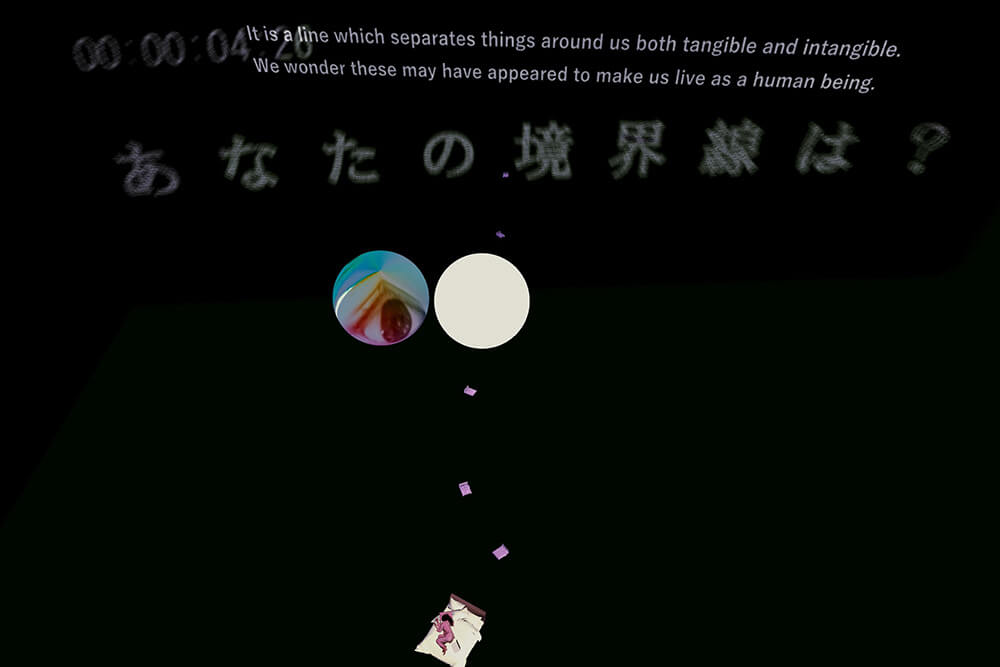 What are your boundaries? 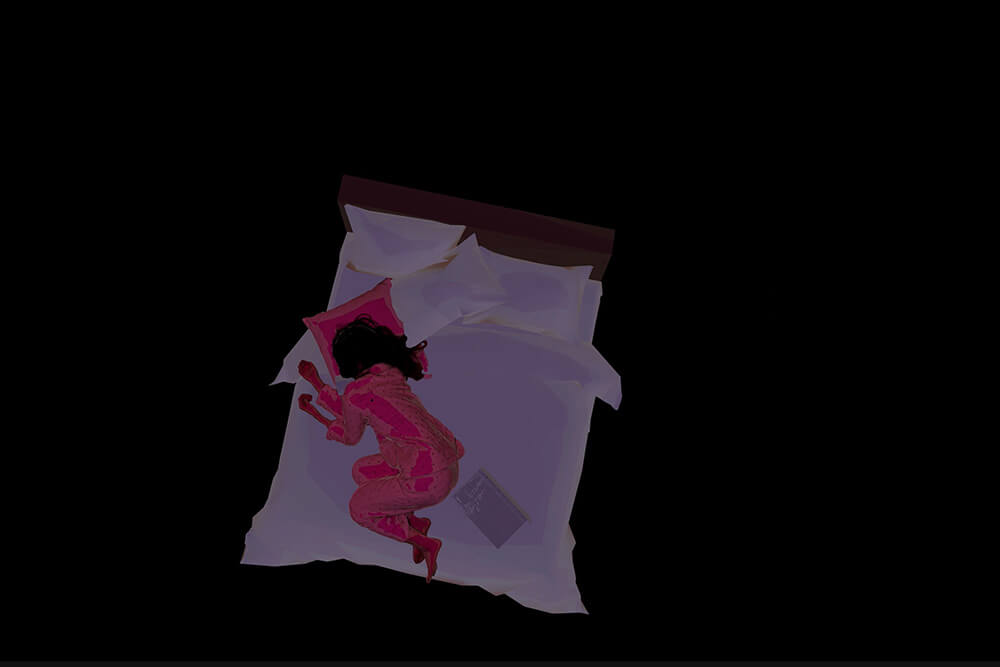 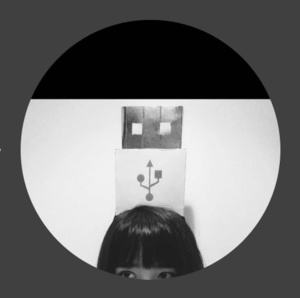 In the summer of 2019, Ono decided to become a USB human being, hoping to “save memories directly in space.” She lives and works as a video editor and illustrator.

What are the boundaries in unconsciousness?

This work examines “the borderline in the unconscious. Meaning of the title “ne.mui” “ne.” is Network and “mui” is the Japanese word for unwillingness, unintentionality, and unconsciousness. ne.mui‘ can also be read as “NEMUI”, which means “I am sleepy” in Japanese.

The artist repeatedly depicts such unconscious worlds in VR space, outside of the world you see—of which you are conscious and aware—and the world after you fall asleep.

Outside and inside, the boundaries other than walls are

The boundary between strangers, nice to meet you

The boundary between garbage and unwanted things is

The boundary between food and cooking is

The boundary between the sky, space and earth is

Two people, the boundary of love is

Life, the boundary of birth is

The author questions the boundaries of consciousness, gradually expanding its scope from the inside to the outside. In the very first poem, she says, “Unconsciously, we live our lives making ‘choices’ in our daily lives.” As she says, “At the same time, boundaries [are] born” in a world of those who do not make choices. By examining that world, she consciously looks at the unconscious world and explores the boundaries that exist there.

When the subjective world is combined with VR

This work is aesthetically composed of the artist’s unique subjectivity and questions and located in a VR world. When such a subjective world is realized through virtual reality, we experience that world with spectacular visuals and sounds. The immersive nature of the experience brings us closer to the author’s subjectivity. This may be the “unconscious connection” that is also the theme of the work.

Where are my boundaries?

We feel a sense of being connected to something without being aware of it. Our bodies cannot be outlined in black like in a comic book, and our awareness is not framed by said outlines. However, after experiencing the author’s subjective world in a virtual space, I somehow felt a sense of connection to that consciousness and to a self that connects to the unintentional. I crossed boundary lines many times in the work, was made to think about various boundaries, and was asked at the end, “What is your boundary line?”

The clear boundary separating “others” from the artist, which existed before I saw the work, blurred when experiencing the work, and the outline of myself blurred as well. The boundary around “oneself” may or may not exist in the first place. While there are contours and conscious identities that make me who I am, in my unconsciousness I am connected to everything, and I do not seem to be interested in drawing a line between myself and everything else. The boundary around oneself in such a situation may be a vague but barely conscious view of oneself.