Geometry nodes were introduced in Blender 2.92 as a feature that allows for a wide variety of geometrical expressions.

This article will cover the basics to get you started with geometry nodes.

What Are Geometry Nodes?

Blender’s geometry nodes are a very sophisticated system for modifying the geometry of an object.

With a node-based interface, you can achieve everything from very simple to very complex modifications.

Geometry nodes were introduced in Blender 2.92 but have undergone major changes in version 3.0.

In this article we use Blender 3.2, but many node features are available from Blender 3.0 and later.

Since geometry nodes are relatively new, we expect to see changes and additional features in the future.

A node is a method of defining a process by connecting “boxes” with inputs and outputs.

In addition to geometry nodes, Blender has several other node-type interfaces, including shader nodes and compositor nodes.

The elements of nodes are listed below:

More than 120 types of nodes are available in the following categories:

In addition to these, there are Group and Layout nodes.

To begin using geometry nodes, click on Geometry Nodes in the Workspace tab at the top of the screen.

By default, the geometry nodes workspace looks like this: 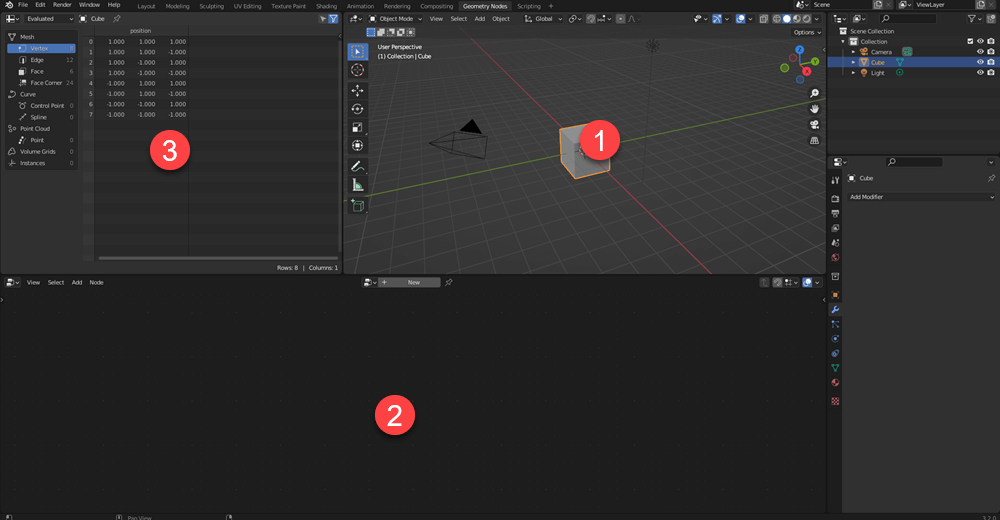 The 3D viewport is the regular 3D view, showing the image in real time.

The geometry node editor is used to connect nodes.

By viewing the spreadsheet, you can ensure that the desired changes are being made to the object. 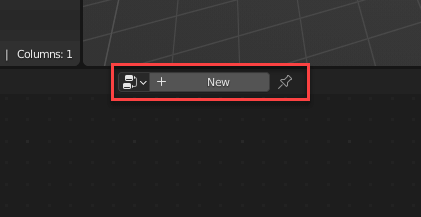 The initial display of the geometry node editor looks like this:

You can see that the “Group Input” is connected directly to the “Group Output.” There are no modifications to the input; i.e. The output and the input are the same.

Therefore, there will be no changes to the object in the 3D viewport either.

The spreadsheet allows you to see that there are eight vertices, along with their XYZ coordinates. 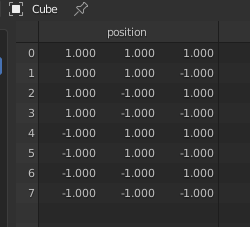 You can also display different types of data by selecting specific categories (e.g., “Edge” or “Face”) in the left region of the panel. 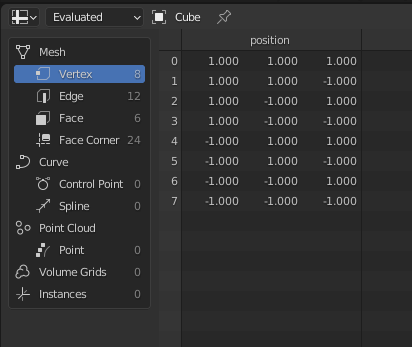 The Extrude Mesh node will appear and you can move it around with your mouse. Move it between the two nodes and left-click when the line turns white.

With the Extrude Mesh node added, the object’s surfaces are extruded and look like this: 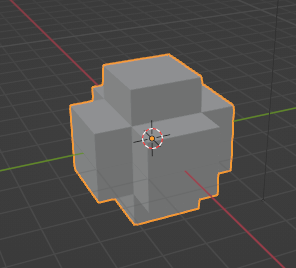 It is possible to change the values of the node. For example, changing the Offset Scale will alter the scale of the extrusion offset.

By connecting the nodes like this, the geometry data on the left side is processed by the Extrude Mesh node and output as new mesh data.

The size of the extrusion can be freely modified like the example above, but it’s also possible to make the extrusion offset random.

To do this, select Add > Utilities > Random Value. 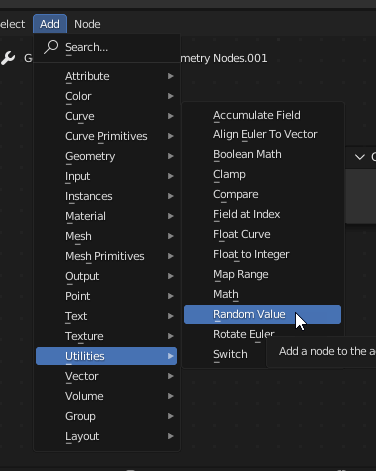 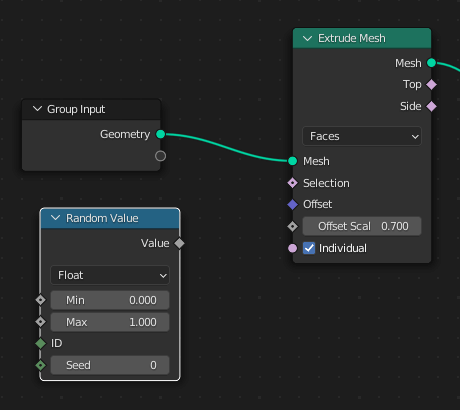 Connect the Value to the Offset Scale.

How to View Node Links

When the link is valid, it is shown as a green line.

When the link is invalid, it is shown as a red line. 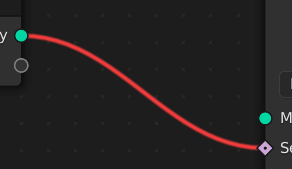 When the output data from a node is used as a function for calculations in the next node, it is shown as a dashed line.

You will see this dashed line appear when the link from the node applies to multiple elements—such as to each face of the object in the example above.

A geometry node can be added to an object as a modifier, so like other modifiers, it can incorporate variables. 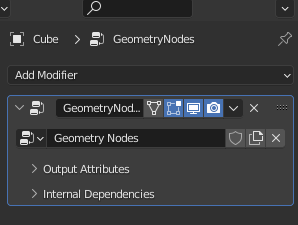 Geometry nodes displayed as a modifier

In the geometry node editor, press the N key to display the panel below.

Select the Group tab of this panel to specify inputs and outputs. 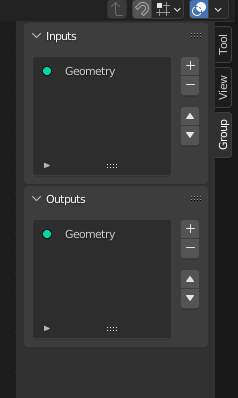 After adding the input, you will see a new socket added to the node’s Group Input, as shown below. 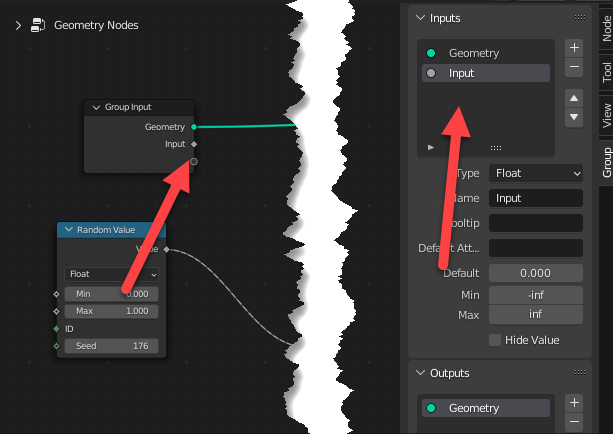 You can now change the value in the modifier properties. 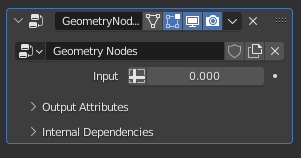 Changing the input value from the Modifier Property tab

Changing this value will affect the geometry.

Tips to Remember When Exporting to STYLY

As with other modifiers, the geometry nodes modifier must be applied when exporting to STYLY. 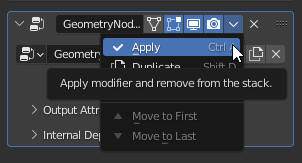 You can also automatically apply all modifiers when exporting in formats such as FBX by checking “Apply Transform” before exporting.

Keep in mind that because this is an experimental function, it may not work as expected. If this is the case, make sure to apply the modifiers individually.

In future articles, we will cover applications and other useful ways to use geometry nodes.