This article describes how Unity’s UI can be used to create a UI that counts points.

The UI elements can enhance your gameplay. The score-counting UI that we will be creating forms a guideline for the development of an entire game scene.

Clarity of purpose can enhance immersion into the scene and can help make your work more enjoyable.

This article was written with the help of the following articles:

If you want to create a simple game in STYLY, you can also refer to the following articles for a better understanding:

A sample of the counting UI we will create has been prepared. Let’s experience it.

This will be a combination of the UI of Unity’s system and that of PlayMaker.

We will create a system that counts by generating events in a target 3D model and increasing the numbers in the UI as it transitions.

In this example, we create a simple UI where the numbers are increased when the TRIGGER EVENT occurs. The final result resembles the following.

The main flow is as follows:

Let’s get Unity up and running. We will also be using PlayMaker, so be sure to set it up beforehand.

When PlayMaker is ready, open a new scene and do the following: 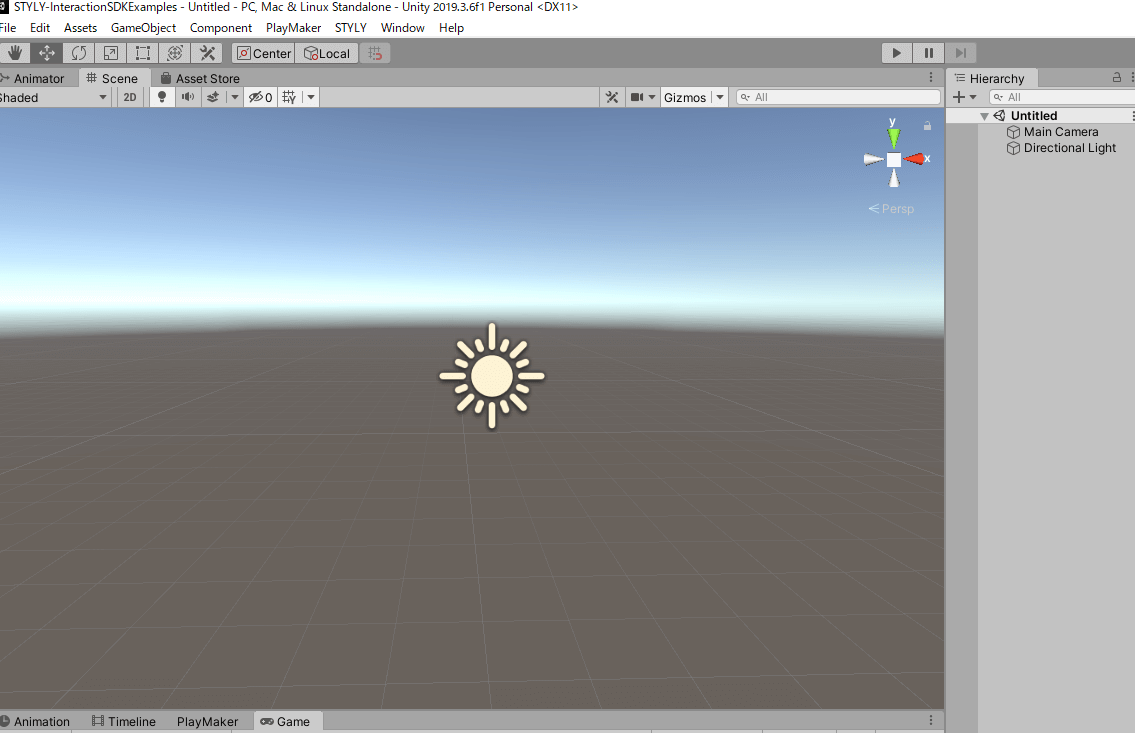 Create a 3D model for this count.

Create a cube and a sphere in Unity.

For this, you can right-click in the hierarchy window and choose 3D Object > Cube / Sphere. 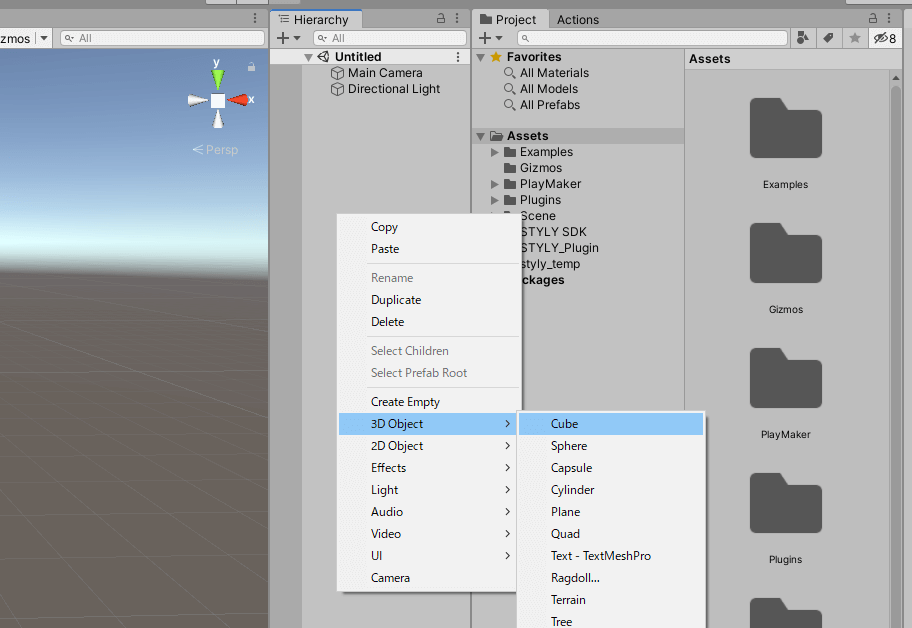 Transform the cube as follows:

Put a check mark on Is Trigger in the cube’s Box Collider.

Add rigidbody from the Add Component menu and uncheck Use Gravity. 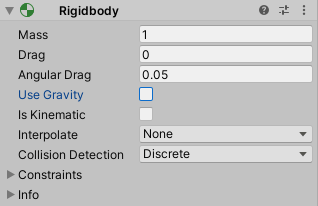 The cube is now prepared.

Transform the sphere as follows:

Set the TRIGGER EVENT for sphere as well.

Check Is Trigger in the sphere’s Sphere Collider.

Add rigidbody from the Add Component menu and uncheck Use Gravity.

Finally, set up an animation to make the sphere touch the cube. 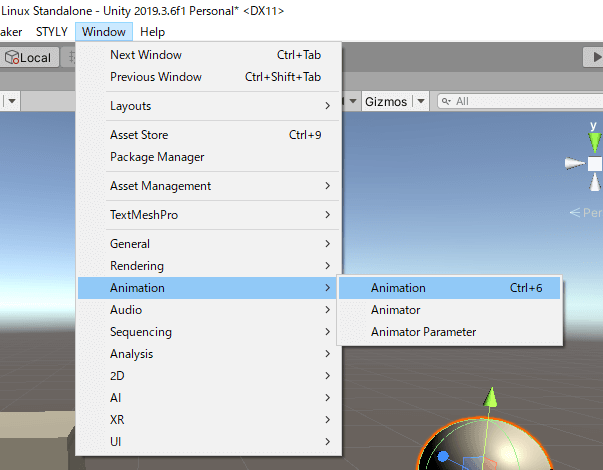 Place it in the desired location. 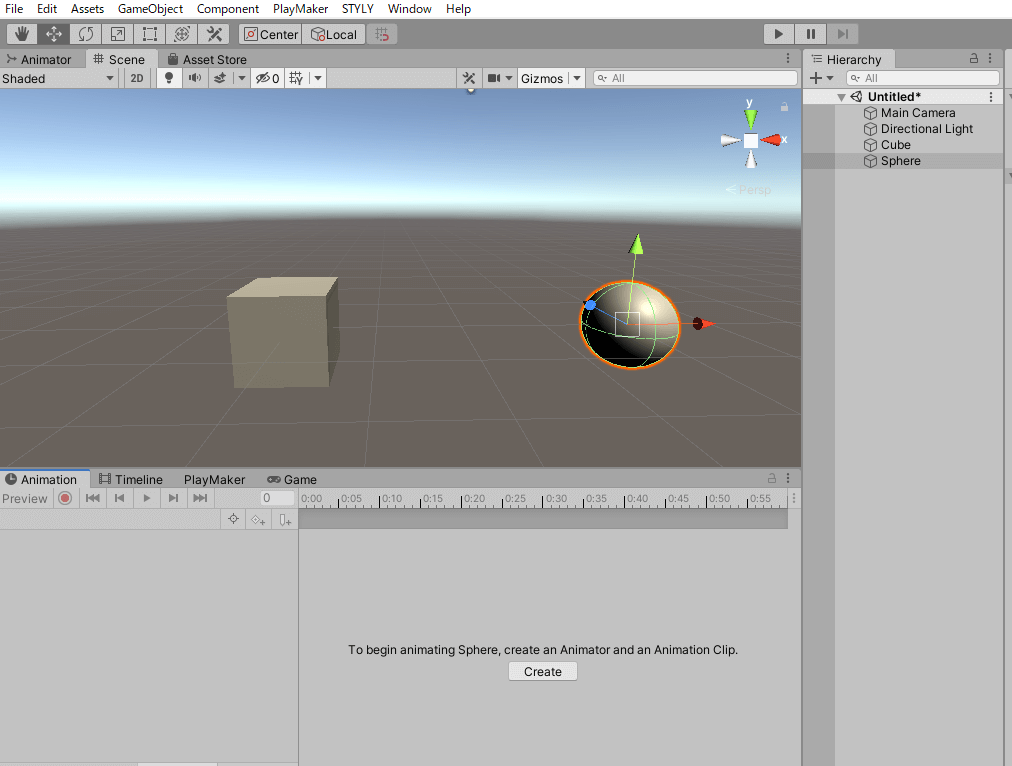 Select Create for the animation window.

Save the animation file to a location of your choice. 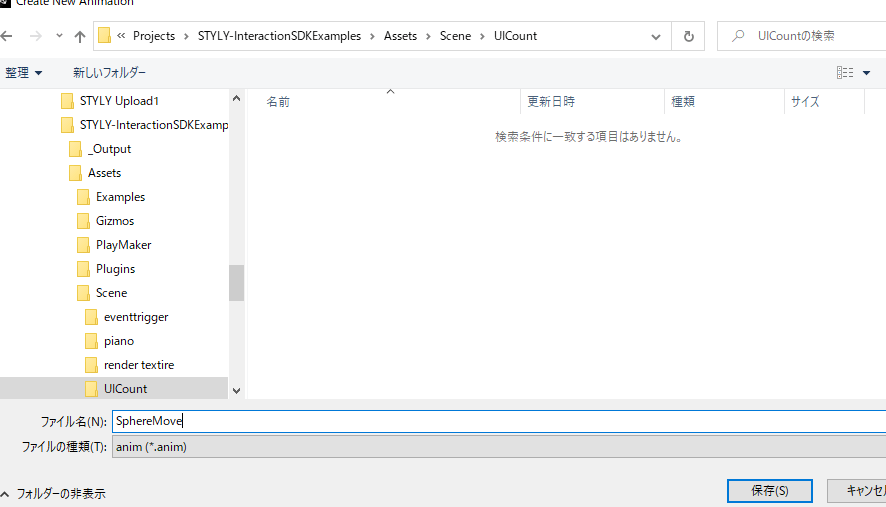 Here, we named the file SphereMove. Save your file to the desired location. 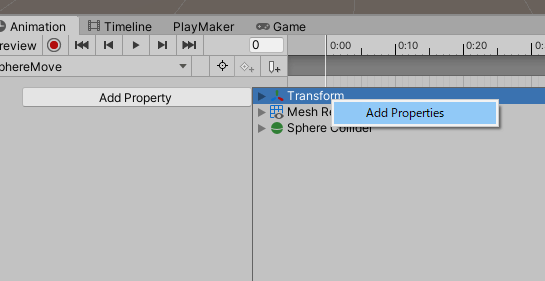 Align the sequence bar to the 0:30 position and set Position X on the Transform to -4.

One second is too fast, so we can adjust it: select three keyframes and zoom in. Make sure that final last keyframe is at the 3 second mark.

Now the sphere will move back and forth, touching the cube as it plays.

This slippage will cause a TRIGGER EVENT to occur.

Our 3D model is now ready. 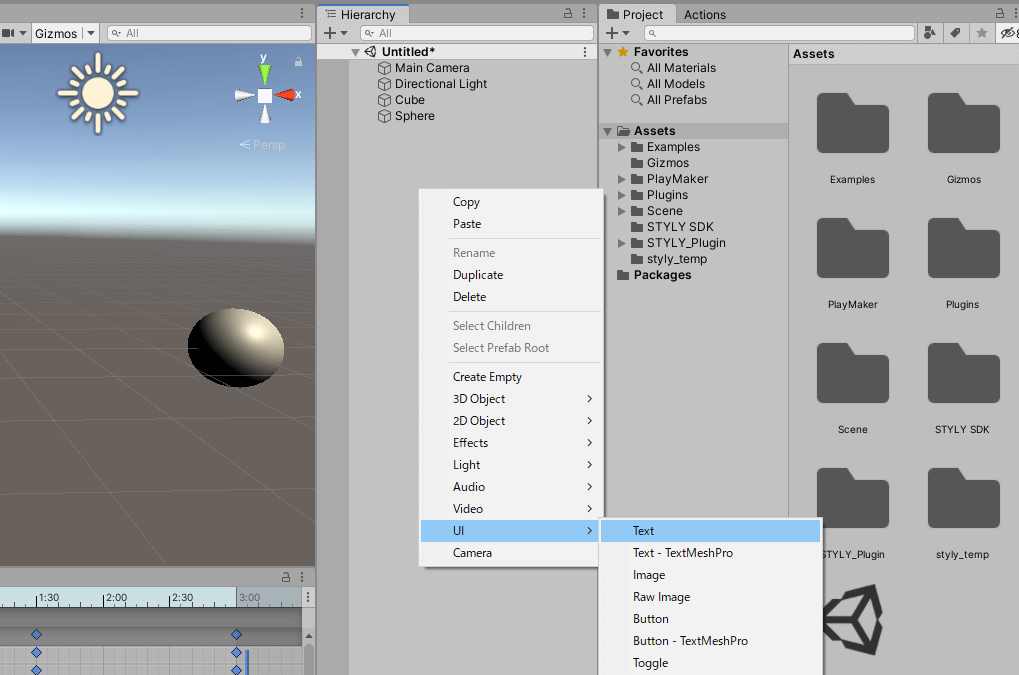 The UI text “New Text” is now displayed in the game window. 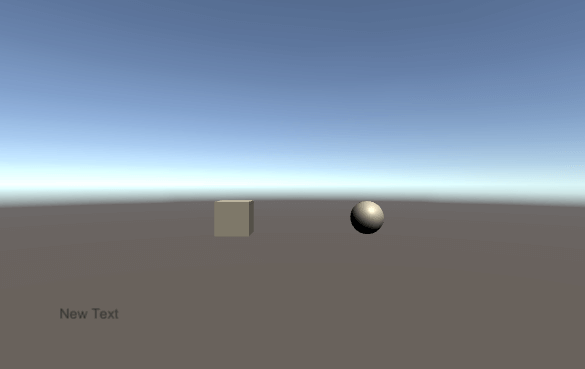 For STYLY, you need to set the UI layer to Default. Usually, it is set to the UI layer, so be sure to change this.

Select the Canvas object, and in the Inspector window, go to “Layer” and change it to Default.

The settings are now complete, but you can also change the position and size of the text.

To change the text position, you can do so from the inspector of the Text object in Canvas in the Hierarchy window.

Select Text and change it with Pos X / Pos Y from the “Rect Transform” action in the inspector window. 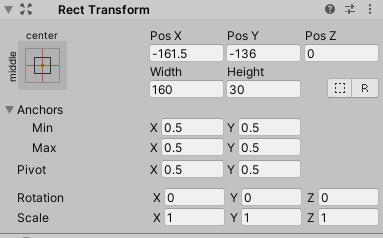 Using PlayMaker, we will create a mechanism for the UI to change depending on the TRIGGER events in the 3D model.

Setting up the Sphere

Add the FSM to the sphere: Right-click on the PlayMaker window and select “Add FSM”. 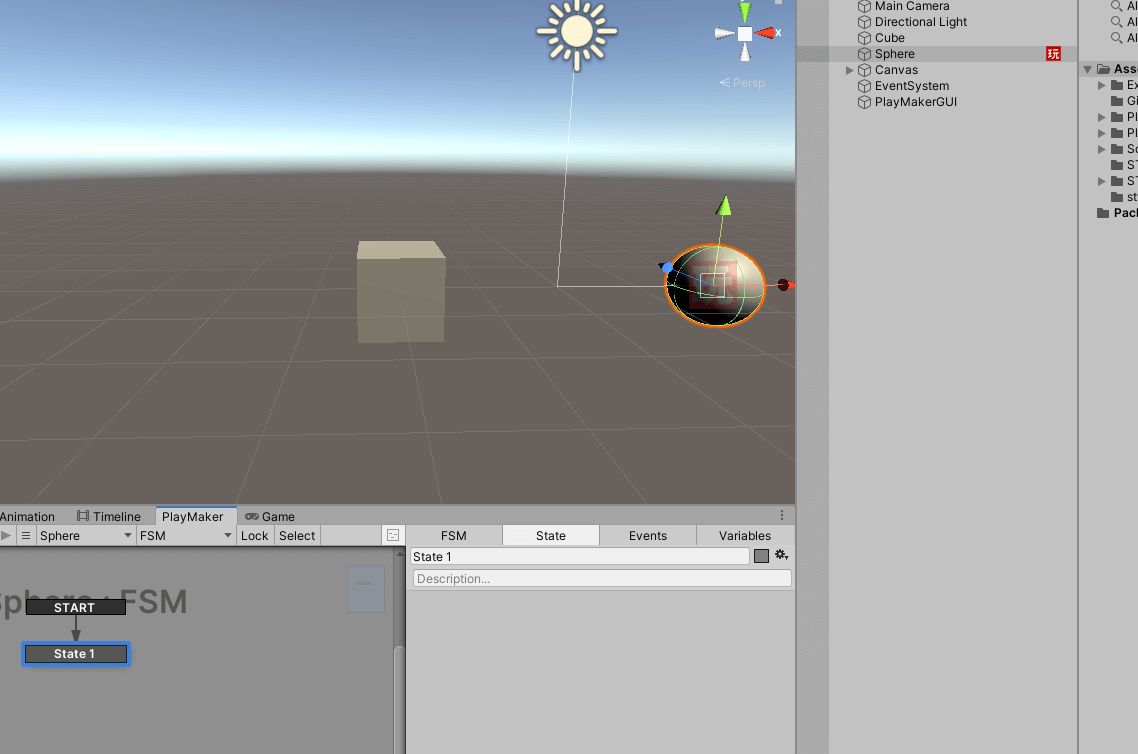 Set the action for State 1. 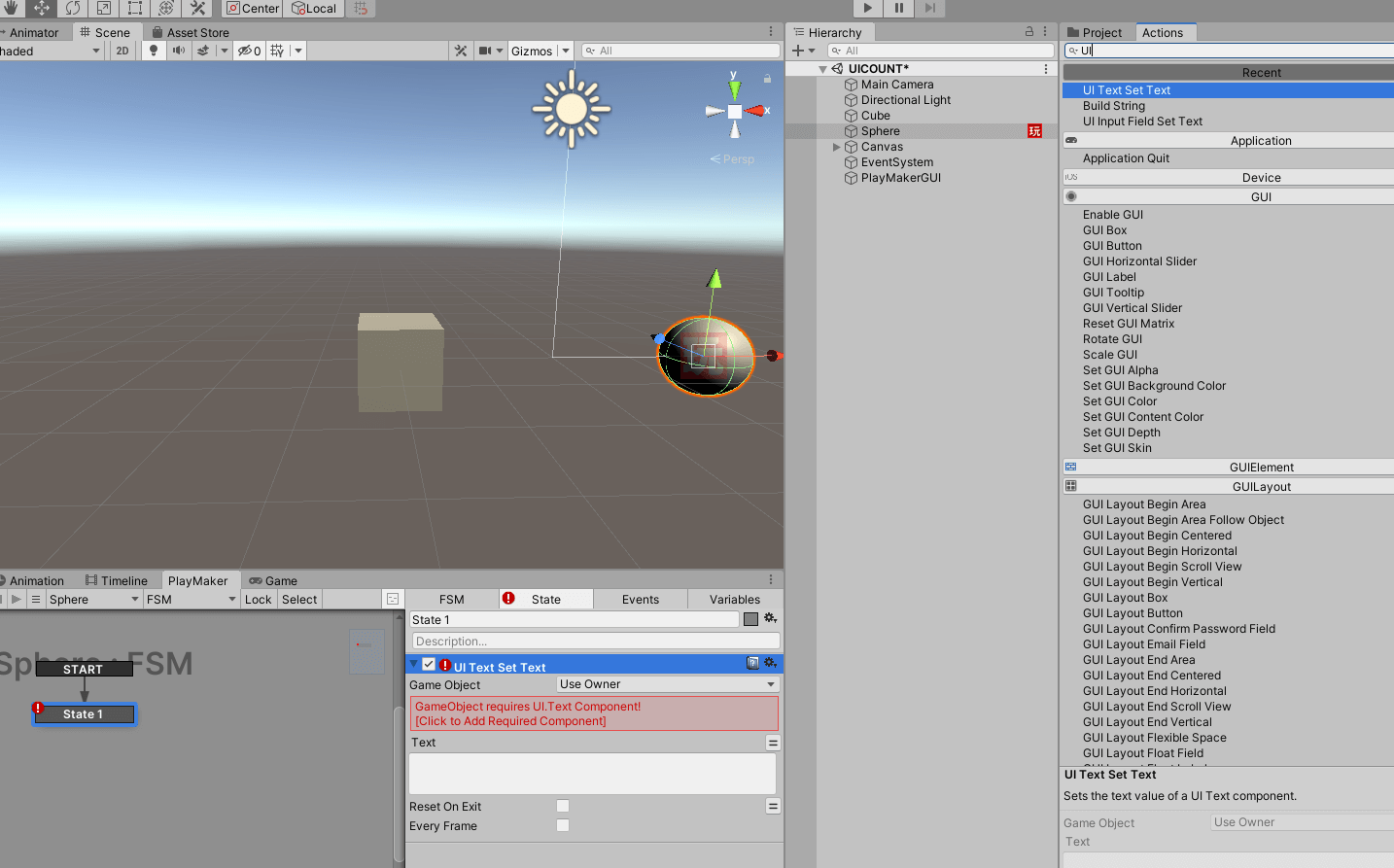 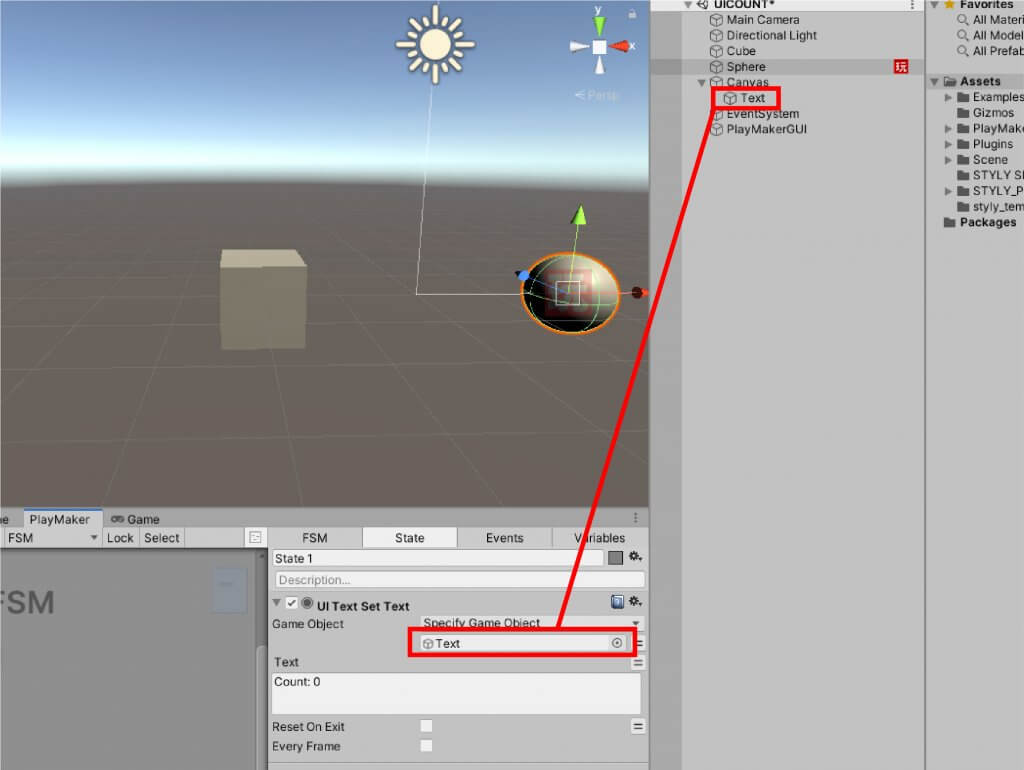 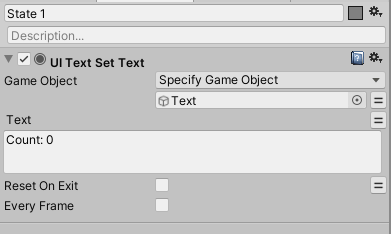 Let’s play it back in this state. 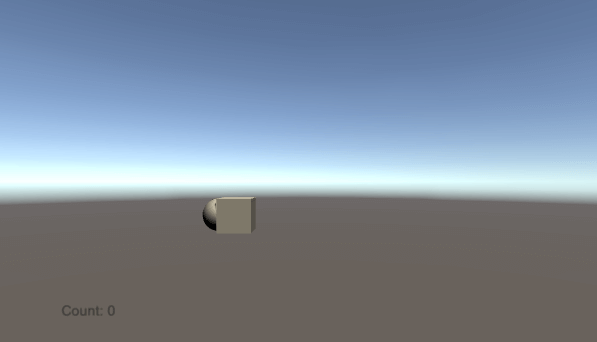 “Count: 0” will be displayed. This action allows you to set the text content of the specified UI object to the specified content.

Next, let’s add “Set Int Value” to State1.
Add a new count variable to the “Int Variable” column and select it. This variable can be added from the “New Variable…” option. 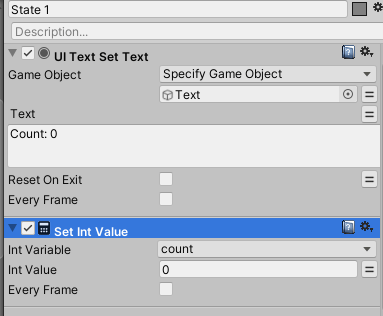 We have now set up State 1.

Next, let’s add another State. 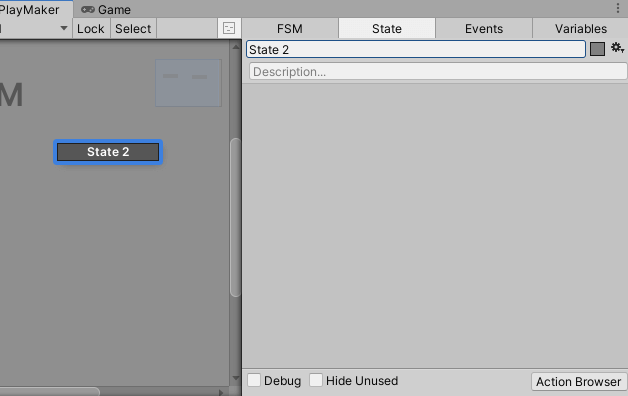 In the Int Variable column, select the “count” variable that we just created.

Let’s set the number for Add to 1.

Next, let’s add the “Convert Int To String” action. 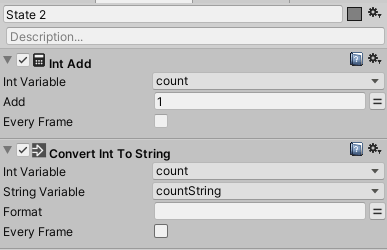 Next, add the “Build String” action.

Set the number of String Parts to 2.

Enter “Count:” in the Element 0 field and press

In the Element 1 column, add the variable “countString”. 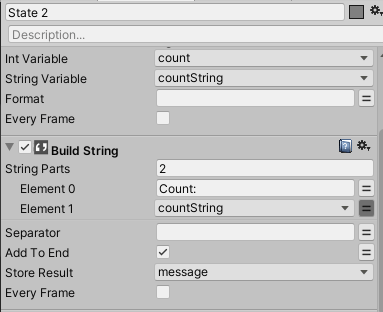 In the Game Object field, we set “Specify Game Object” and drag and drop a text object.

In the text field, select the “message” that we have set up earlier. 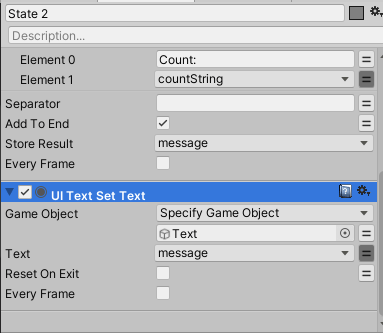 Now, we have set up the State. 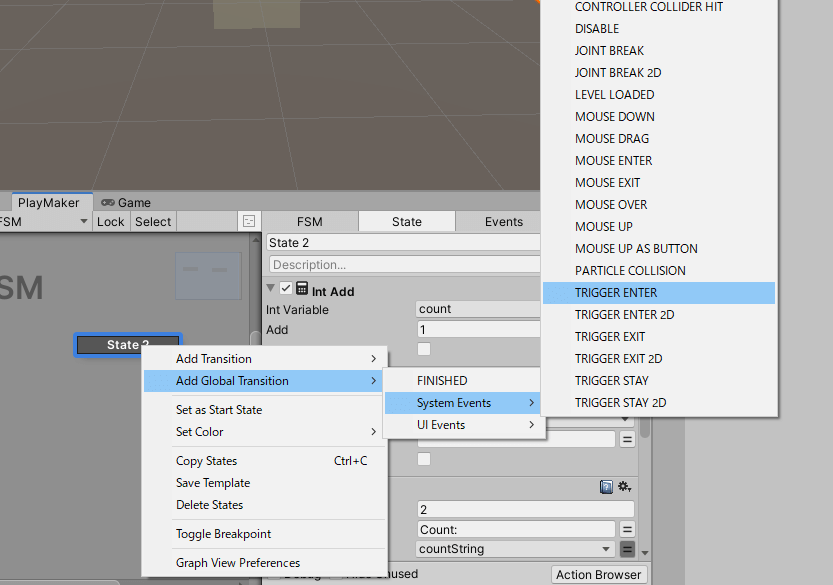 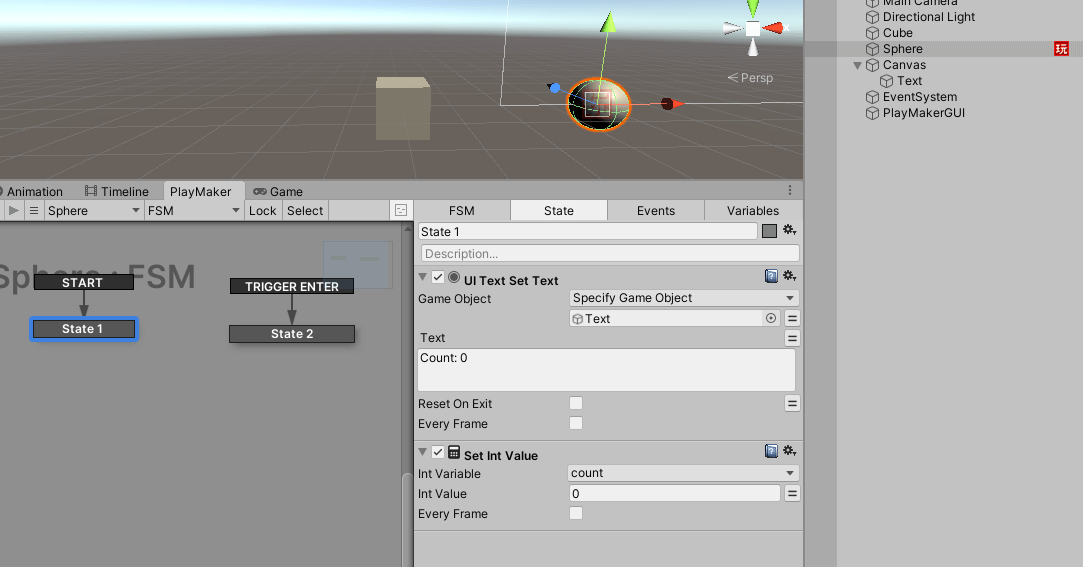 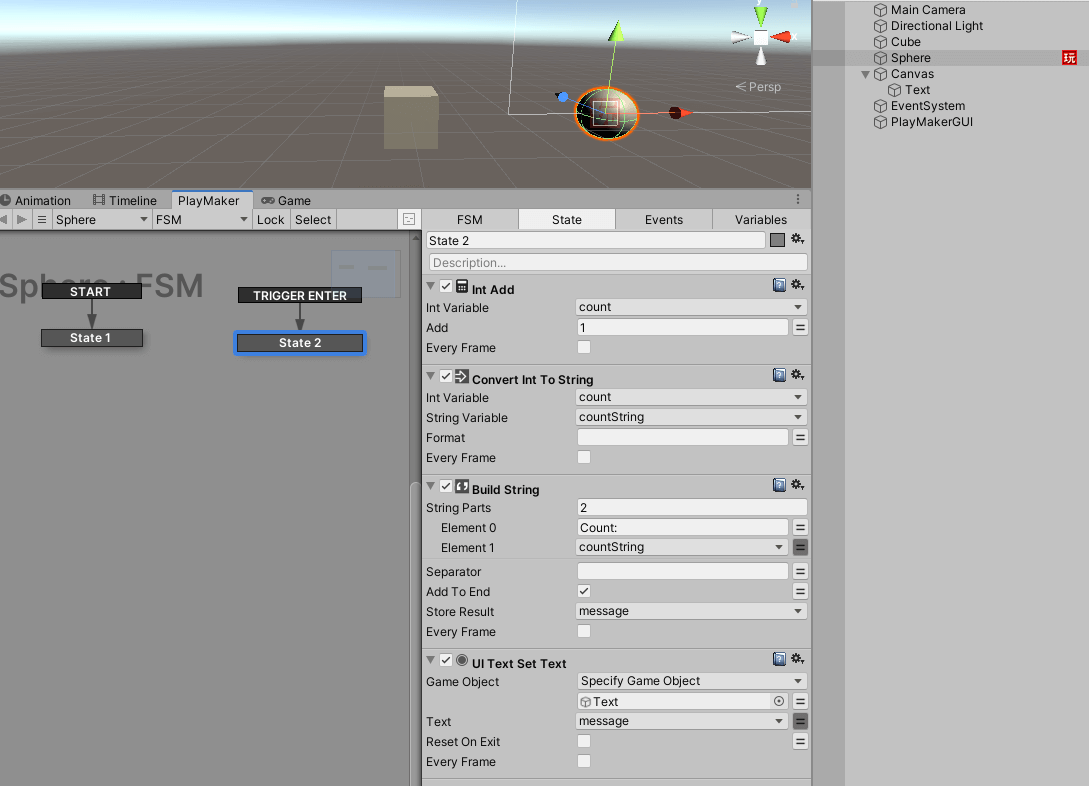 Let’s play it back.

If the number in the UI below counts up, you’ve succeeded.

Upload to STYLY. This time, we’ll upload it by scene upload.

If your scene is too large to upload to STYLY, please refer to this article:

If the UI appears on STYLY, you have succeeded.

If you want to adjust the position of the UI, etc., fix it in Unity. 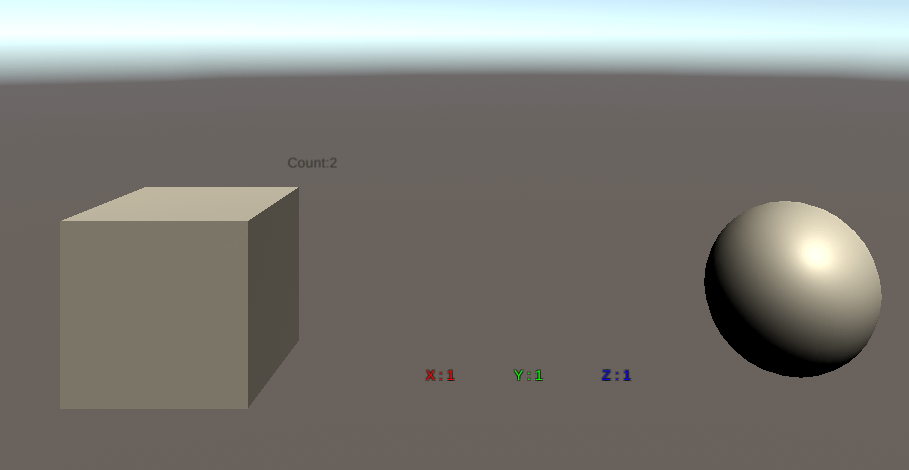