This article uses Unity’s Button UI and combines it with the Interaction SDK provided by STYLY to create a UI in which interaction occurs.

Like Unity, an interface that uses graphics such as images is called a Graphical User Interface (GUI).

In this article, we will use the Button object of Unity’s GUI. We will begin with basic functions and then explain how to work with the Interaction SDK.

For more information about the Interaction SDK, one can read the following articles in advance to deepen their understanding

A sample scene follows below. Let’s experience a type of UI to create.

This section introduces how to create and configure the Button UI.

How to add a button

The first method of adding a button is to directly add a button.

You can add a button by right-clicking on the Unity hierarchy window and selecting UI > Button. 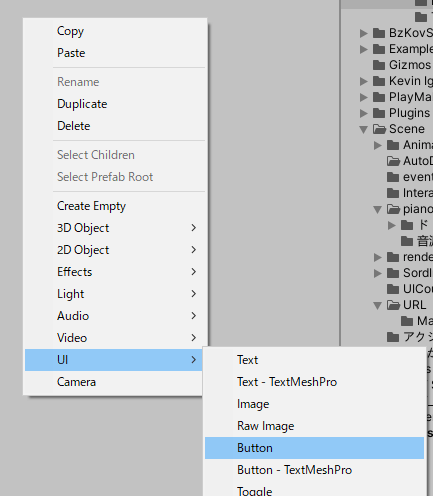 4 objects will be added to the hierarchy window.

The button UI has now been added.

The button is pre-configured to cause interaction when one left-clicks the mouse.

This occurs because the Button component has a pre-configured “On-Click” event. By combining this event with the Interaction SDK, one can create a mechanism where the action of the Interaction SDK is triggered when the button is clicked. 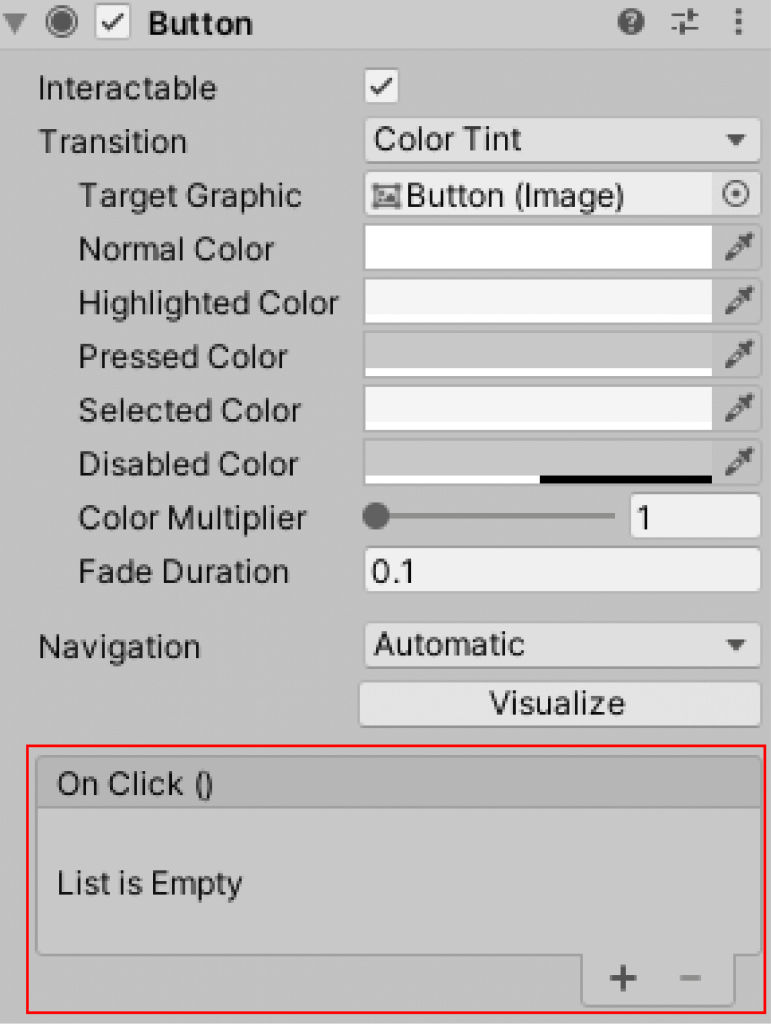 First, let’s customize the Button component by changing its color.

Select the Button object. Let’s set up the “Button” in the inspector window. 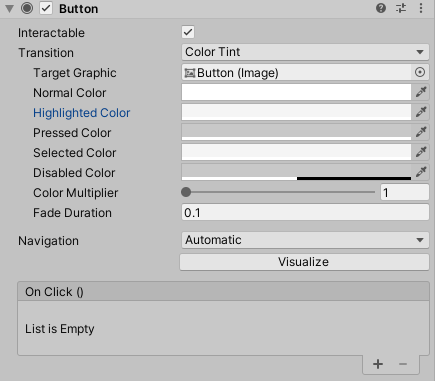 In this tutorial, we will use a Color Tint as a basic tool.

The Color Tint is used to set up a color change when the button is pressed.

Each setting item is described.

Leave Target Graphic as is. 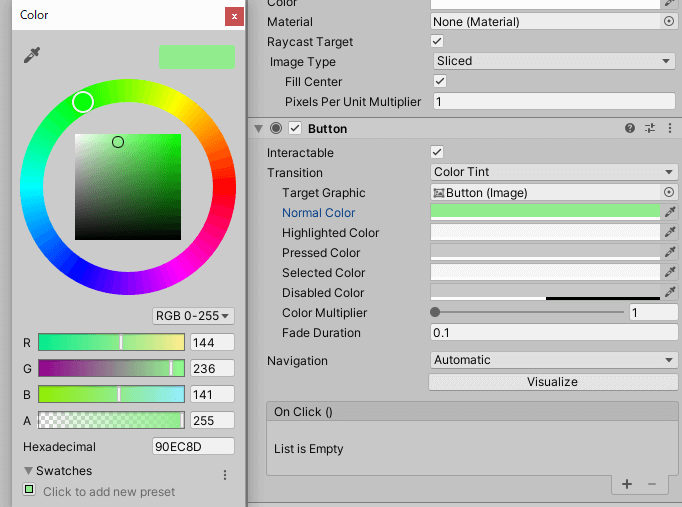 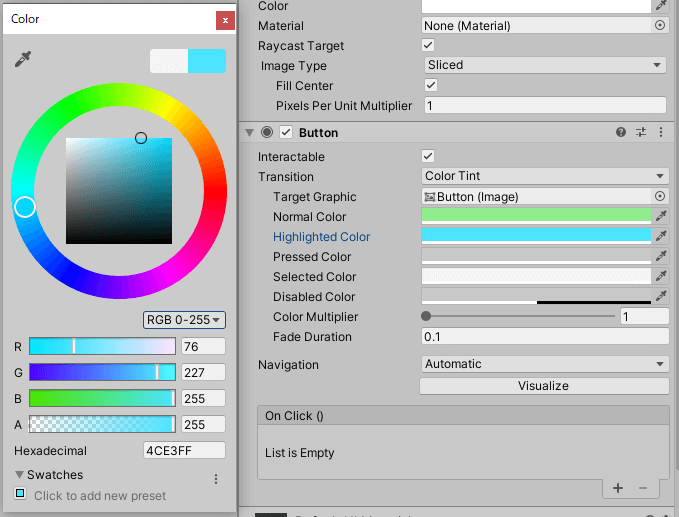 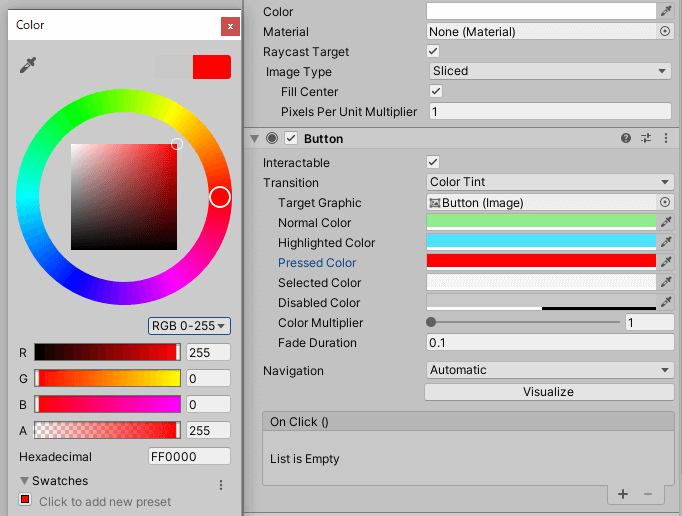 The result is as follows. 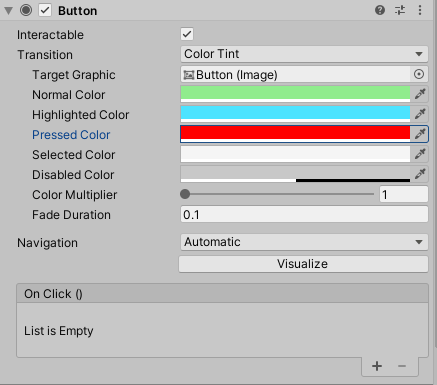 Now let’s play the scene. Play it and click the button in the game window.

The color of the button has changed, but it turns white after the click. This is a result of an activated navigation mode.

Change the navigation setting from Automatic to None. 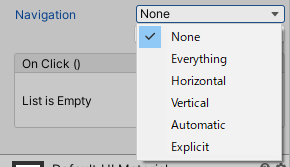 Now the color changes as intended.

This is how one can set the action of the button.

We have only written about this color setting, but you can also set the image of the button.

We will discuss that in other article.

In its current position, the button is in the middle and somewhat obstructs manipulating the screen.

Let’s set the position of the button.

Select the Button object to view the Inspector window.

To set its position, size, etc., we can change the Rect Transform. 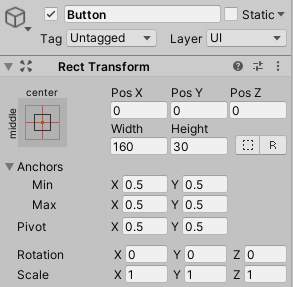 You can adjust the position of the buttons by changing the topmost Pos X, Y, and Z values.

In this case, let’s increase the size of the buttons slightly and place them at the bottom of the screen. 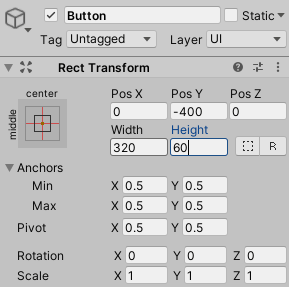 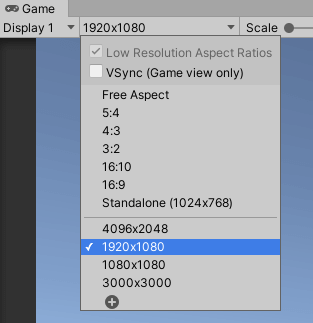 One then has the following. 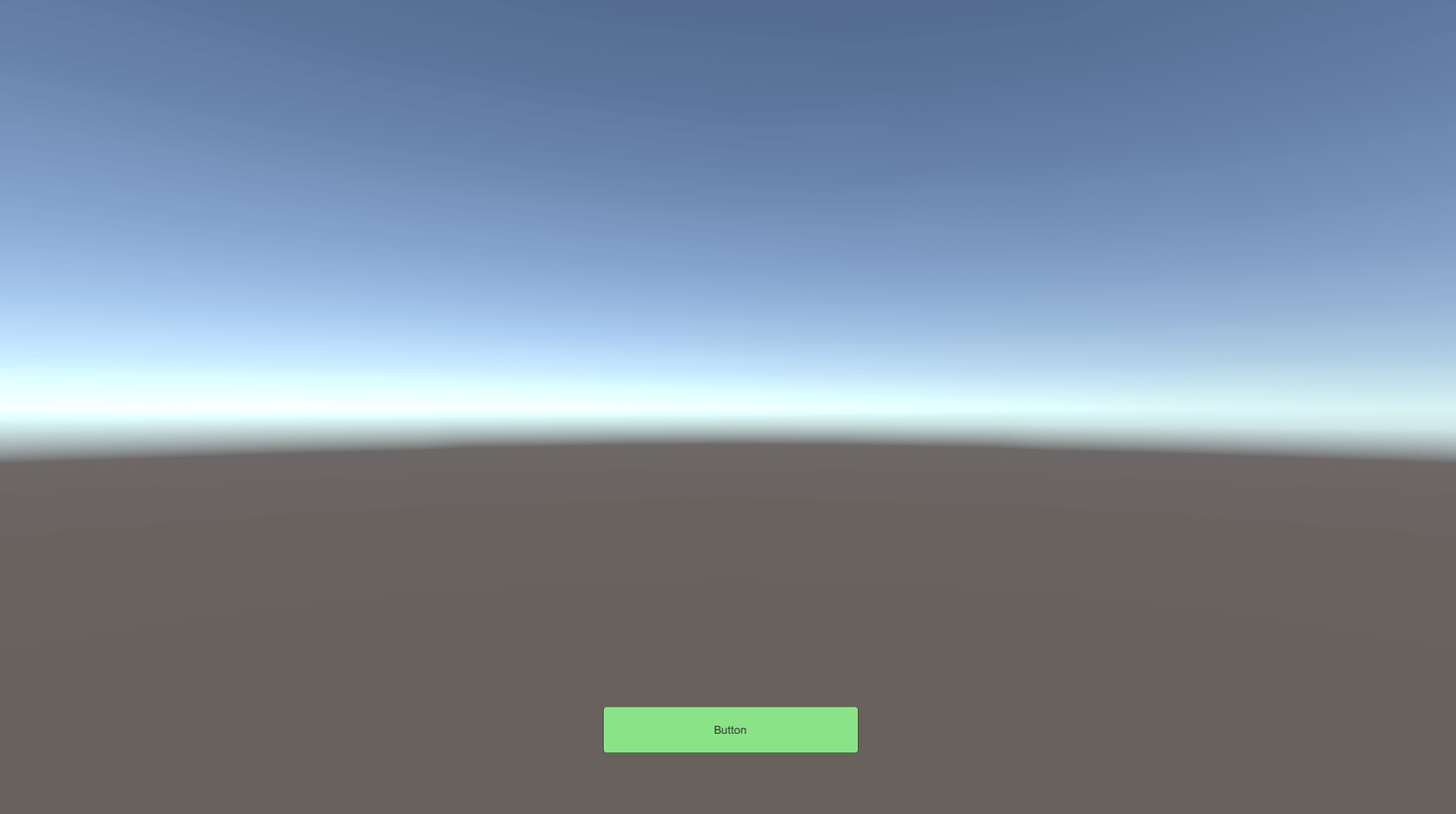 Now you can set the position!

Refer to the following article to learn how to add the Interaction SDK.

In this article, we will use the interaction SDK “STYLY_Action_Spawner” to create an interaction that generates an object when a button is pressed.

Create an object generated by Spawner.

Right-click in the hierarchy window to create a Sphere object. 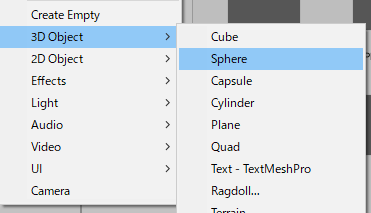 The name should be Spawn and the Transform should look like the following.

Attach Rigidbody and, when it spawns, set it to generate gravity. 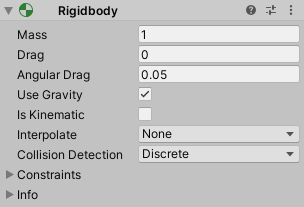 Drag and drop the Spawn object from the Project window to the Hierarchy window.

Remove Spawn on the hierarchy window.

Removed from the hierarchy window. 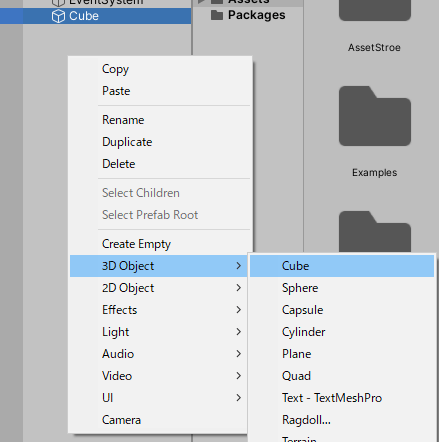 Let the name be Spawner and the Transform be

Add the script STYLY_Action_Spawner in the Interaction SDK to this Spawner object.

Add it from the Inspector window. 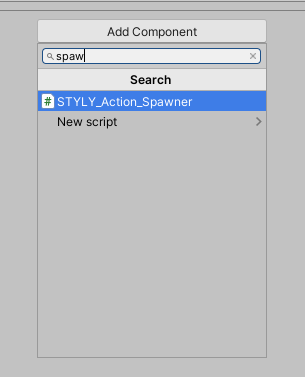 Add a prefabricated Spawn object in the Prefab column.

Make Spawn Transform a Spawner. Drag and drop it from the hierarchy window.

You are now ready to set up Spawner.

Pressing the left mouse button creates a mechanism that generates a Spawn object from Spawner.

Click Button in the hierarchy window to bring up the inspector window. 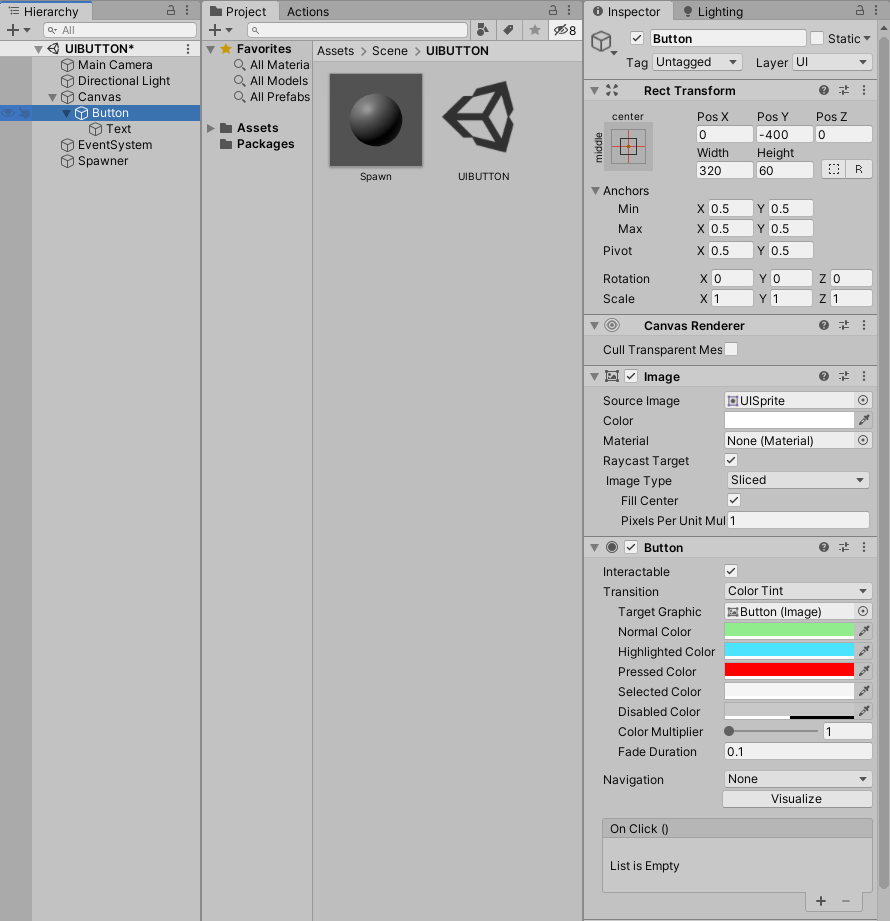 Configure the On-Click settings for the Button object. 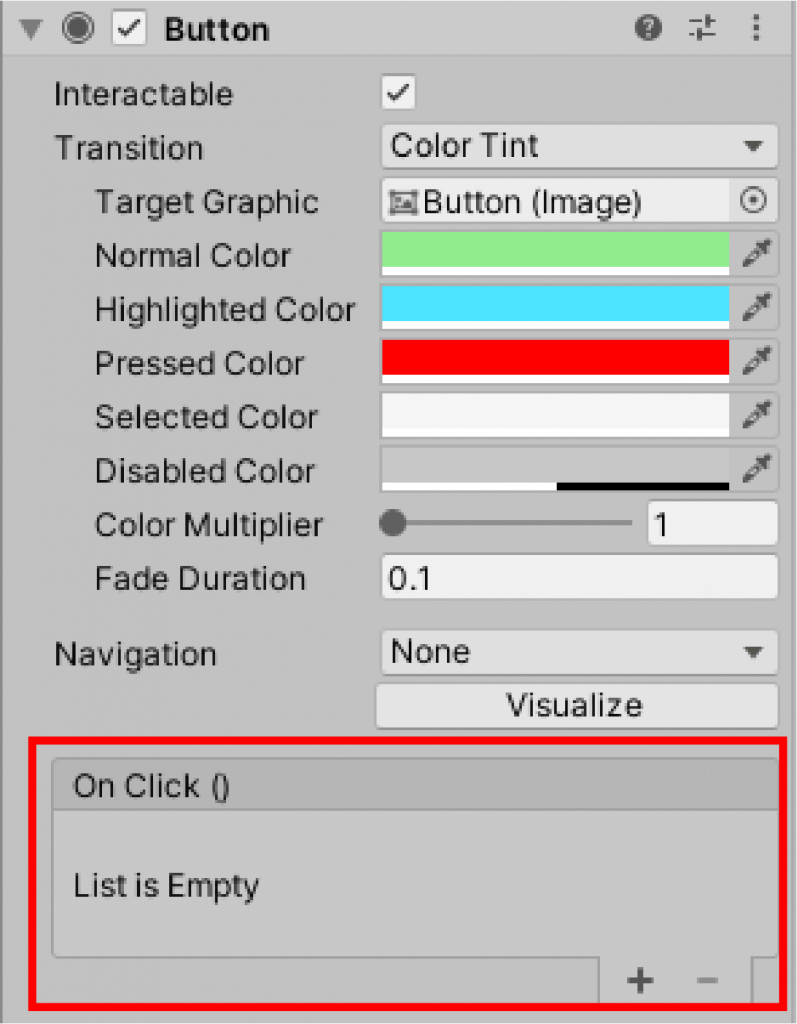 Let’s add a List by pressing the “+” button in the bottom right corner.

After the List is added, drag and drop Spawner from the hierarchy window to the “None (Object)” field. 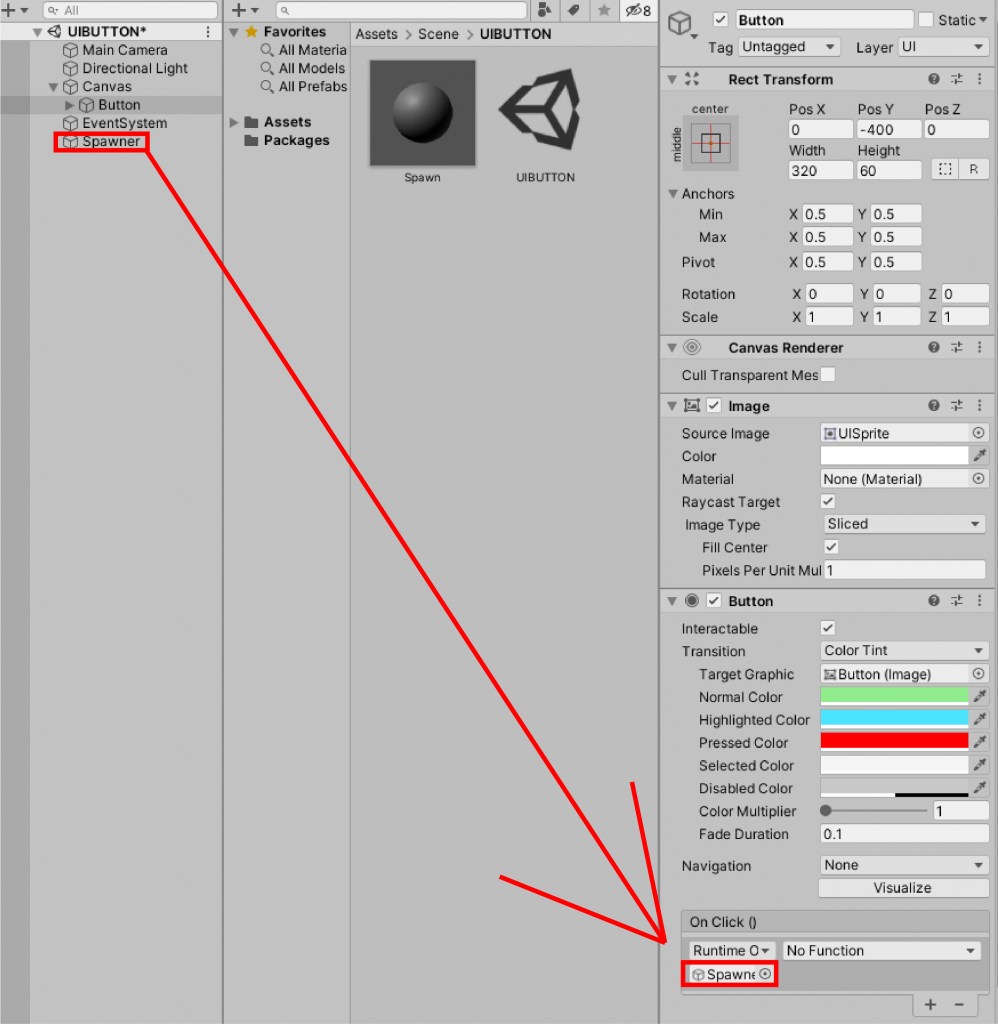 Set the No Function field to STYLY_Action_Spawner > Spawn().

You have now completed the configuration.

Let’s play it back to observe.

Press the button and Spawn from Spawner has occurred. It is now complete!

If your scene is too large to upload to STYLY, please see this article.