This article covers the basics of Unity’s Event Trigger, which is also used in the STYLY Interaction SDK.

As an application, we’ll modify the Interaction SDK samples so that you can create your own interaction objects. 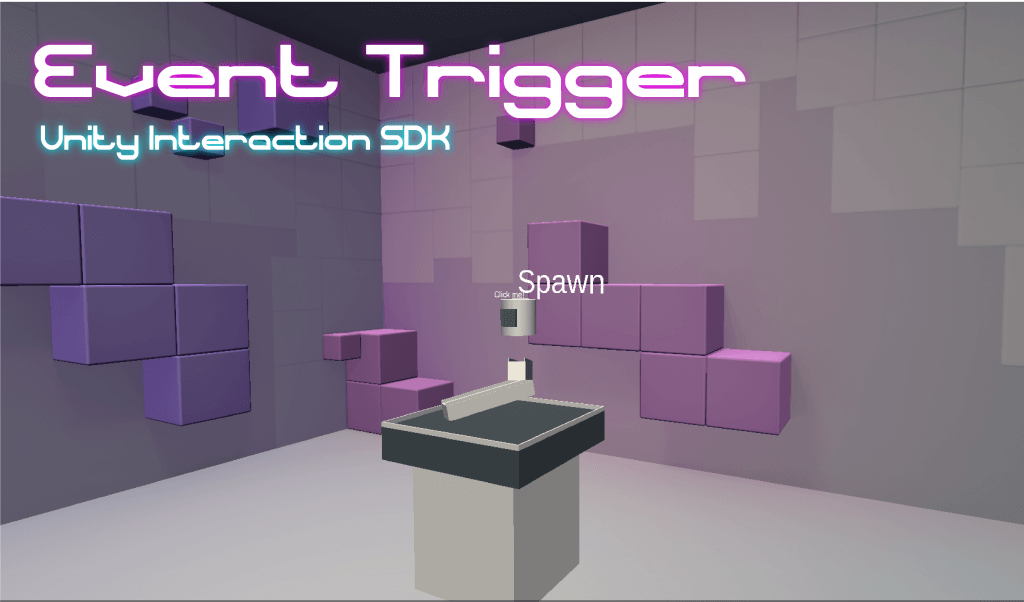 We are exposing the interaction object we will create.

What is Event Trigger?

Event Trigger is one of Unity’s components.

Event Trigger can be triggered by entering a specific condition (Event Type) for an interaction, such as entering a VR controller button.

These include interactions such as “Enter the VR controller button”.

By firing an event, you can recall a script of a specified game object.

This sequence of events allows you to trigger interactions with objects in your scene.

STYLY implements interaction by combining the Interaction SDK, the scripting component that generates the action, with the Event Trigger.

The process of creating an interaction

This section explains how to use Event Trigger while actually creating a simple interaction object.

The Event Trigger can be added from the Add Component in the Inspector window of the game object.

Let’s set up the event in the game object to which we have added Event Trigger.

In this case, we will create a Cube and add an Event Trigger.

Launch Unity and create a Cube on your scene. 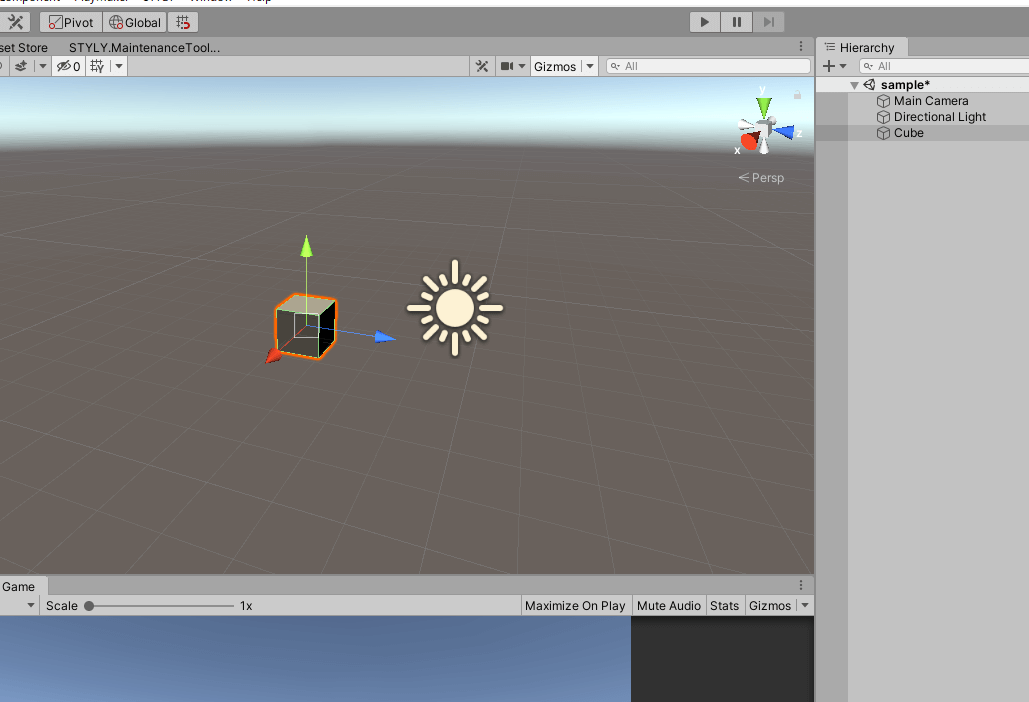 Let’s add an Event Trigger to the Cube. 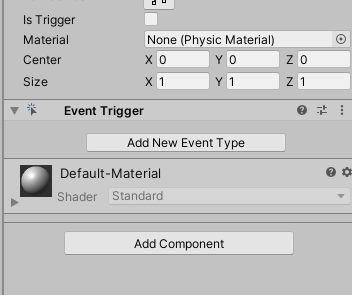 We have now added an Event Trigger.

Event Type is a variable of the operation that the player causes.

Typical variables that are mainly used are

Note that there are various other variables, some of which are not STYLY supported.。

The variables can be found in the Unity manual.

In this case, we will use PointerDown. Select “Add New Event Type” and add Pointer Down. 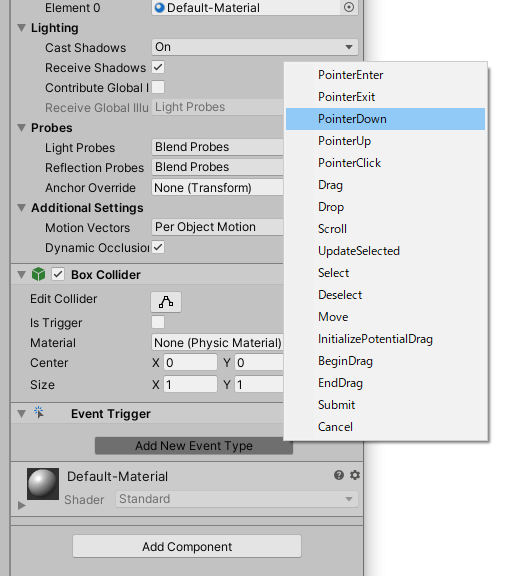 We have added an Event Type.

Choose a script to be triggered by Event Trigger.

Here is a script for the Interaction SDK to trigger an interaction STYLY.

In this case, we will use STYLY_Action_Mover.

In Cube’s Inspector window, select STYLY Action_Mover from Add Component and add it. 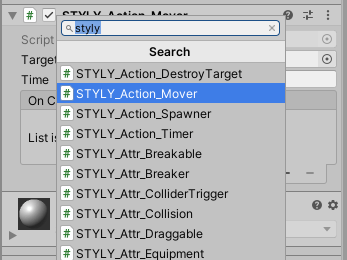 We will also need to configure STYLY_Action_Mover.

STYLY_Action_Mover is an interaction SDK that moves the specified object to the Target position.

Let’s decide on a Target. In this case, let’s use a simple game object to set the position.

Name the Game Object as Target.

Set a Time value. This represents how long it takes to move. Let’s say it takes 5 seconds, and Time is 5.

Now the Interaction SDK is ready.

After adding the script, add the List in the Event Type.

Initially, it’s in the state “List is Empty” because of the state from

Let’s add the List by pressing the “+” button at the bottom.

If you want to delete the List, you can delete it by pressing the “-” button.

Now that the List has been added, let’s set it up.

In the “None (Object)” column, select the game object to which the event will be applied. In this case we select Cube.

Let’s drag and drop it from the hierarchy window. 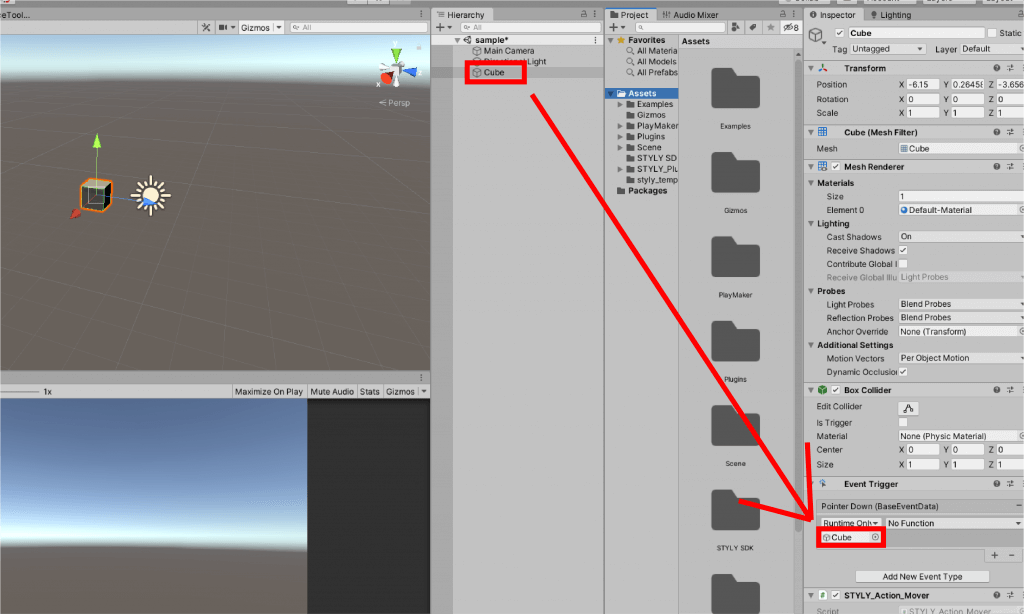 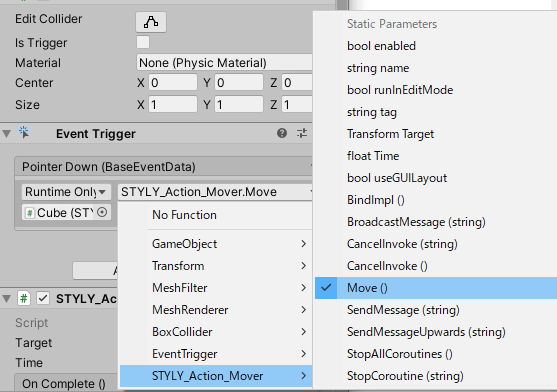 The List is now ready to be set up.

Now the Event Trigger and Interaction SDK is ready.

Let’s actually play it back.

Drag the mouse to the object and click. Then an action is triggered (actually click the trigger button on the VR controller).

(Actually, click the trigger button on the VR controller)

This is the sequence of Event Trigger.

You can easily trigger an event by adding Event Trigger as a component.

In this case, we will use Spawn, a sample object from the Interaction SDK.

Let’s prefab Spawn to be used in another scene.

Create a New Scene and start it up.

Place the Spawn object we just created in the scene. 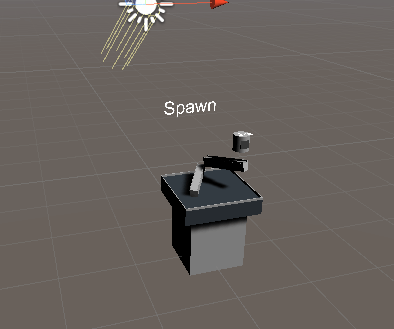 In this Spawn object, we’ll use the

This is how the system works. 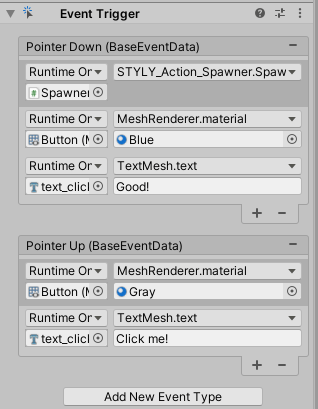 Let’s modify this system to create an original interaction object.

This time, we’ll modify Pointer Down and convert it to a different Event Type.

This time the modifications are

Let’s study the procedure while actually creating the object.

First, let’s empty the list of Event Trigger of Button object, then select the “-” mark on the right side of Event Type to delete it. 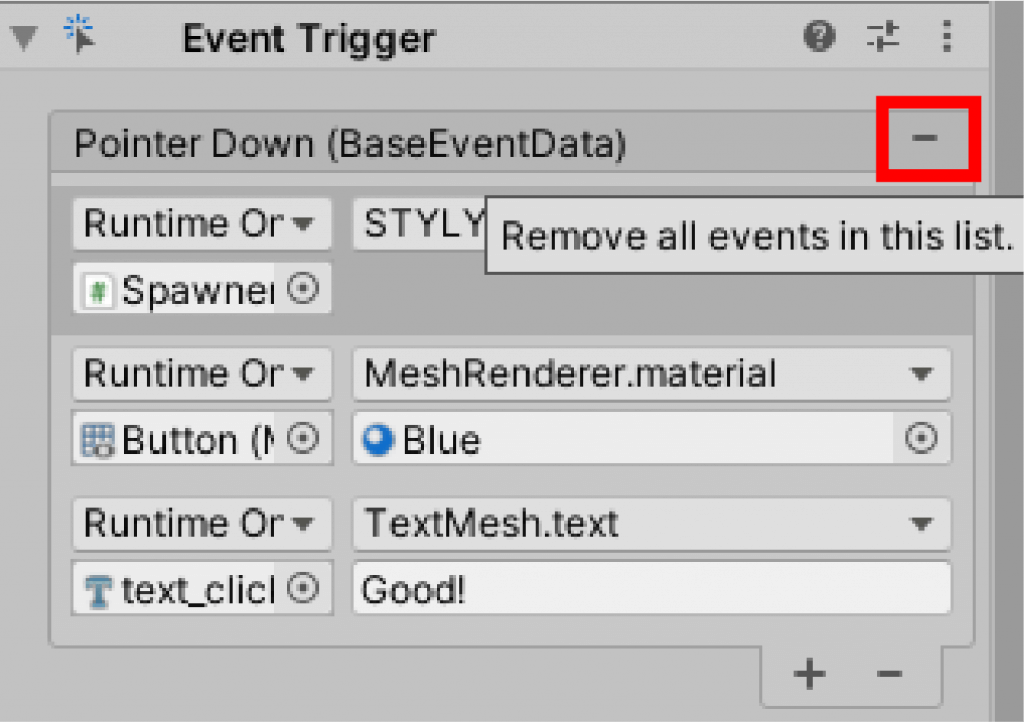 Now we are ready to go.

Use the following table to add Pointer Enter and Pointer Exit from Add New Event Type. 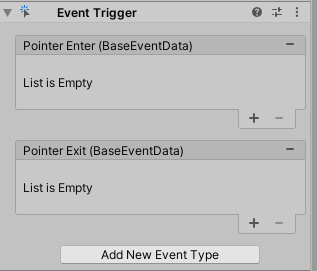 The Event Type has been added.

Next, we add a List to each Event Type.

In this case, we’ll base it on the unmodified List.

When the button is in the Pointer Enter state (the button gets on the object), we’ll add

When the state of the Pointer Exit (button leaves the object)

You can add a List from the “+” in the bottom right corner. 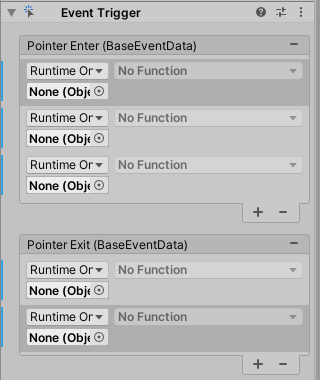 Set the action of the Spawner object in the first List of Pointer Enter.

Drag and drop Spawner on the hierarchy window to the None(object) column of the Event Trigger. 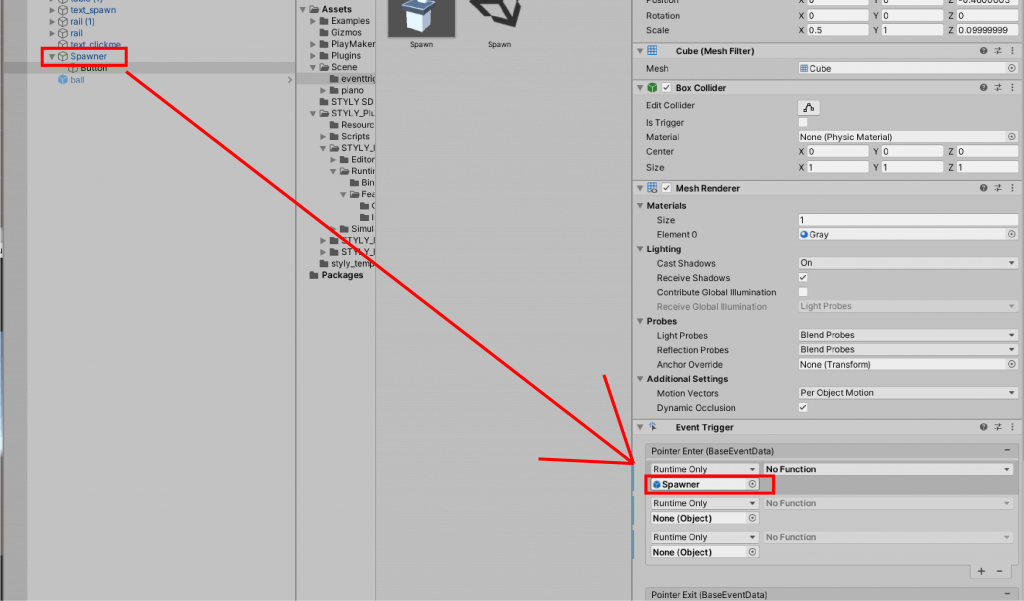 In the No Function column, select STYLY_Action_Spawner > Spawn(). 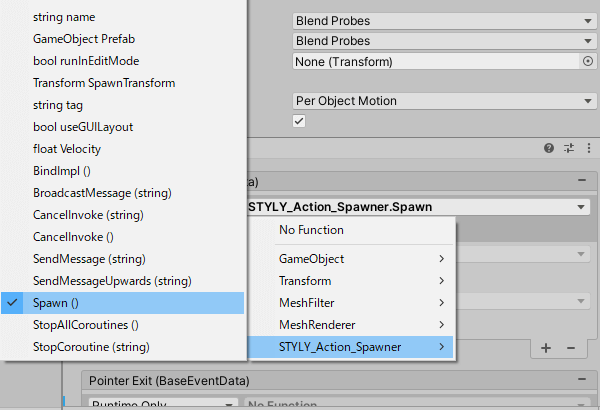 When you play the game in this state, the ball is spawned when the mouse touches the button.

(Actually, click the trigger button of the VR controller)

Set the action to change color at the touch of a button.

Before the modification it changed to blue, but this time we want it to change to yellow.

Prepare the material. Create a material in the project window via Create > Material.

Set the material’s Color to yellow. 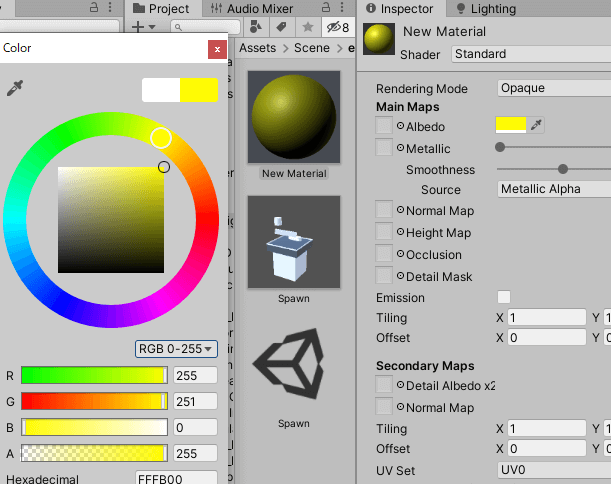 The material has been created.

Drag & drop the Button to the None(object) column of the second List of Pointer Enter. 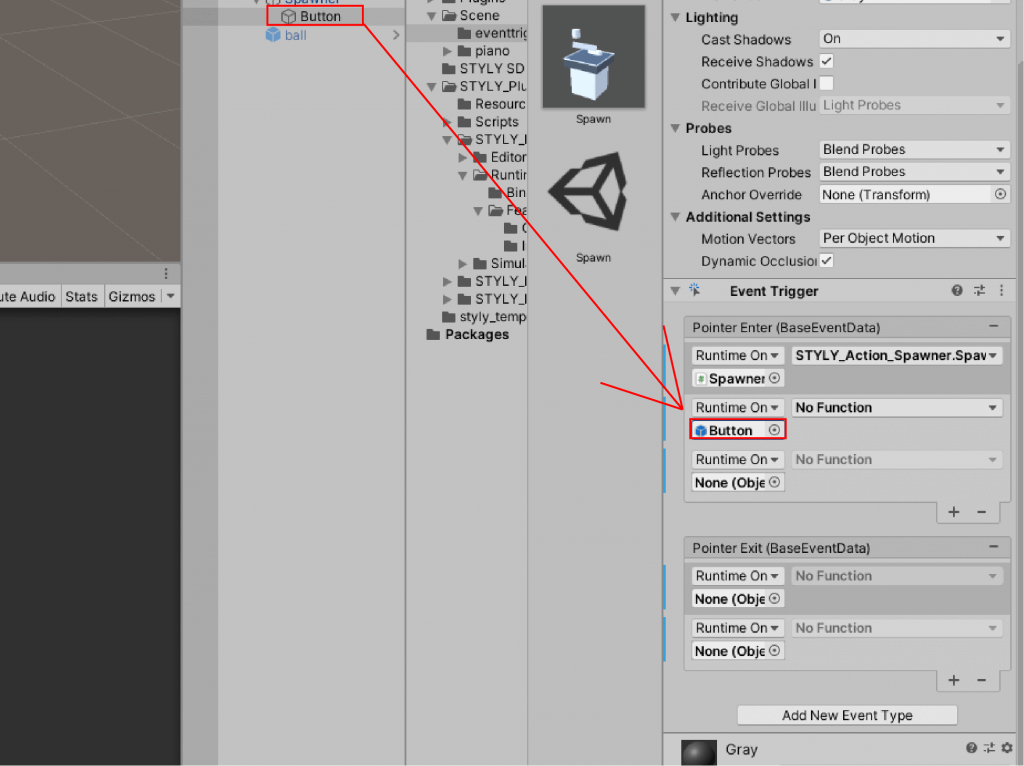 Set No Function to “MeshRenderer > Material.material”. 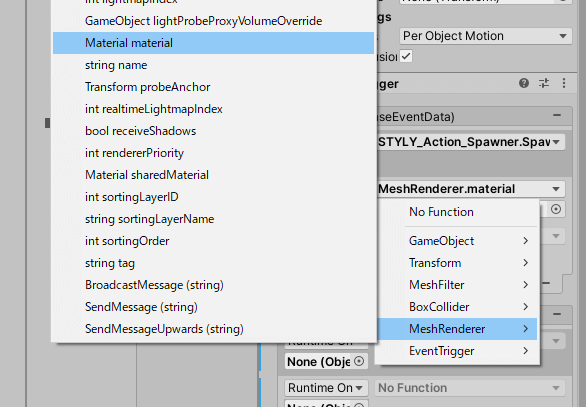 Select a material and drag and drop the Yellow material to the None object. 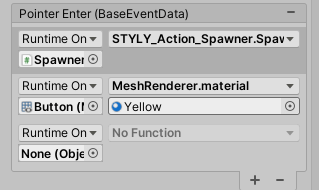 The material is now ready to be used.

Set up the text.

Drag and drop “text_clickme” in the hierarchy window to None(object) in the third column of the List. 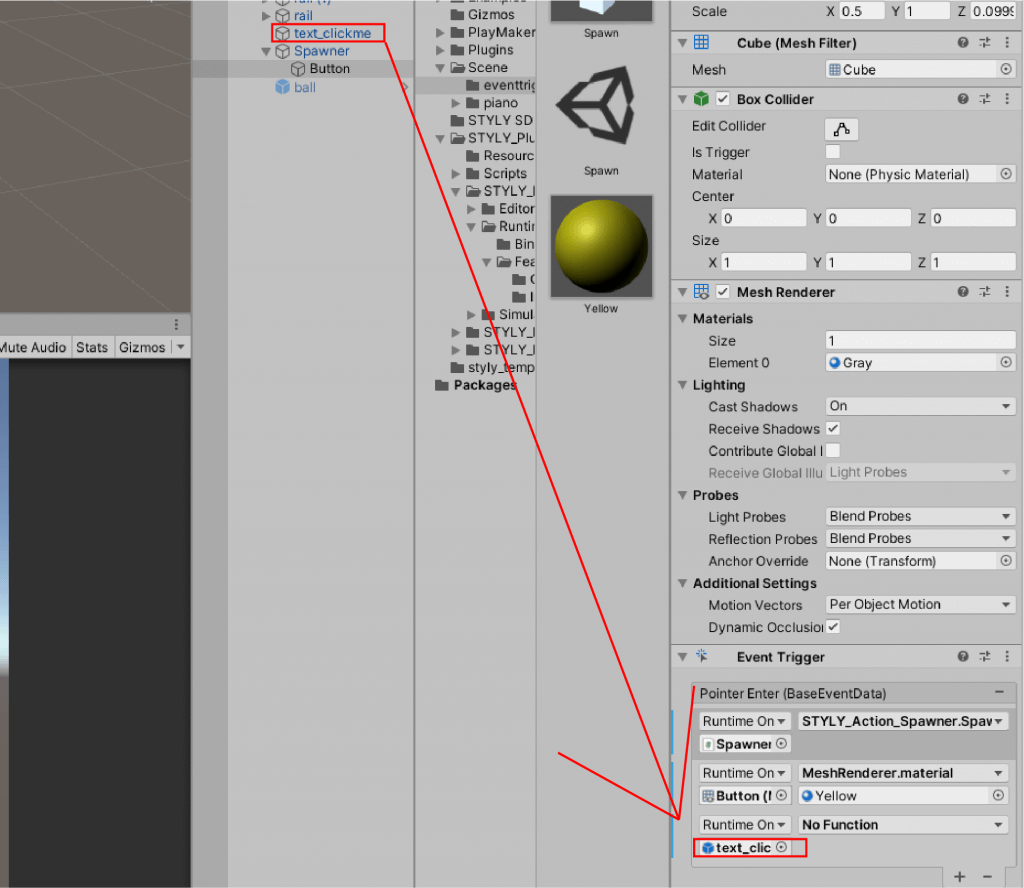 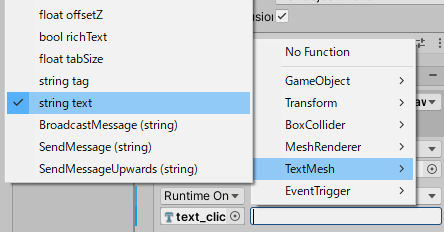 A rectangle is displayed. Decide the message to be displayed when the button is touched. You can enter any message you want here, but in this case, we’ll choose “Good”. 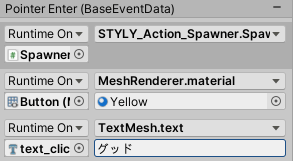 Now you have set up Pointer Enter. Let’s play it back.

Next, let’s set the color of the button and the text to return when the mouse leaves the screen.

(Actually, when the controller’s ray leaves.)

Since the color of the button is still yellow, we set it to turn gray when the controller’s ray leaves the object.

Drag and drop the Button to the first “None(object)” in the List of Pointer Exit. 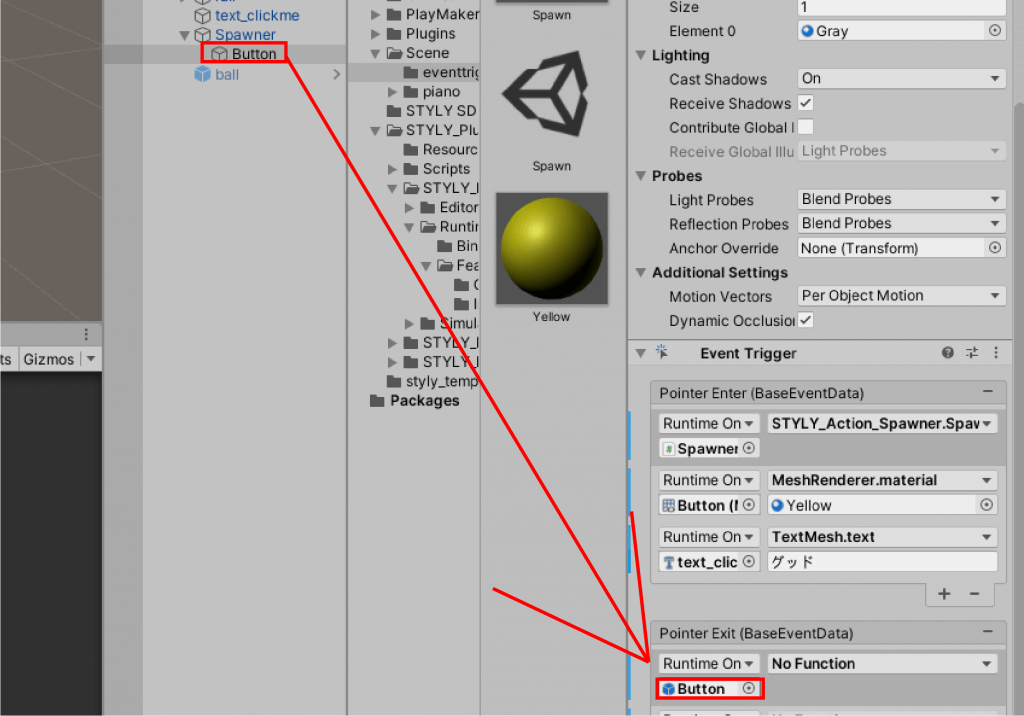 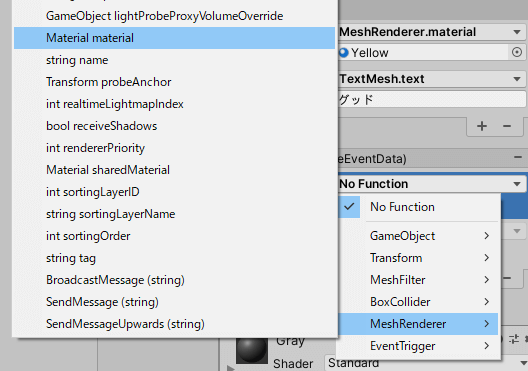 You are now ready to set up the material.

Drag and drop “text_clickme” on the hierarchy window to None(object) in the second List. 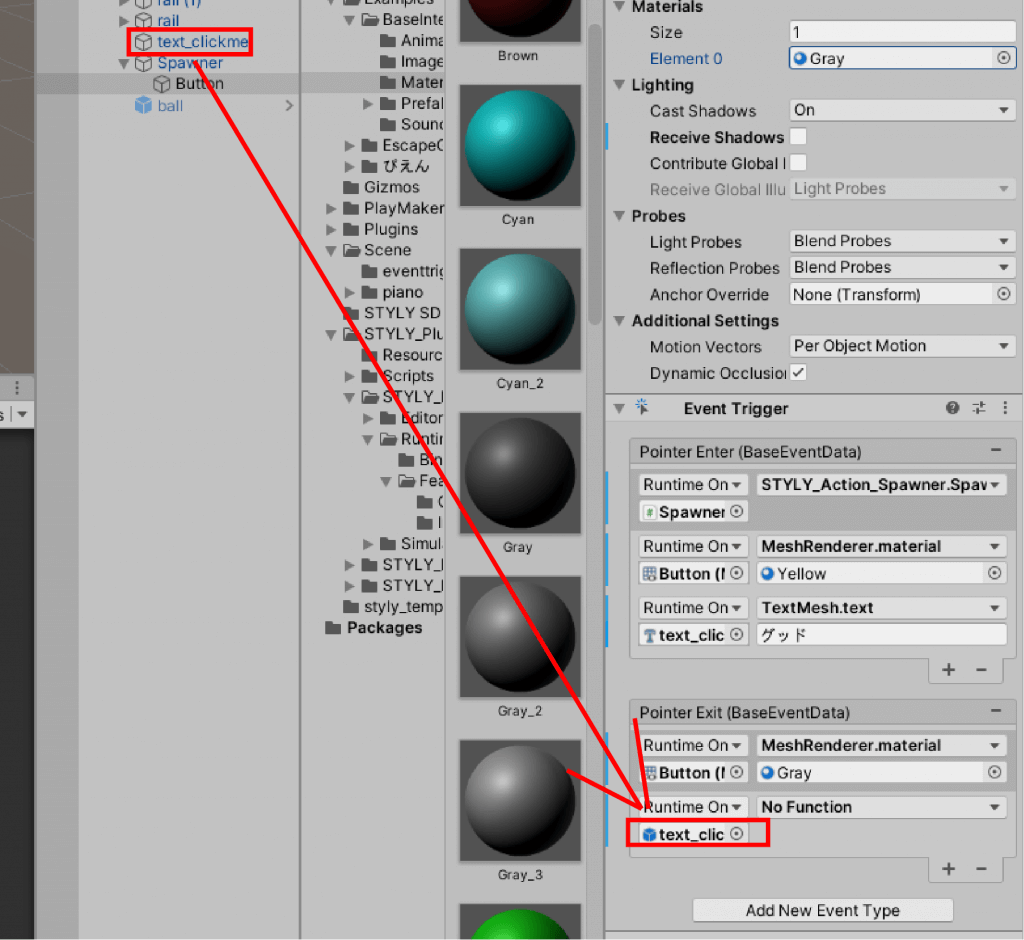 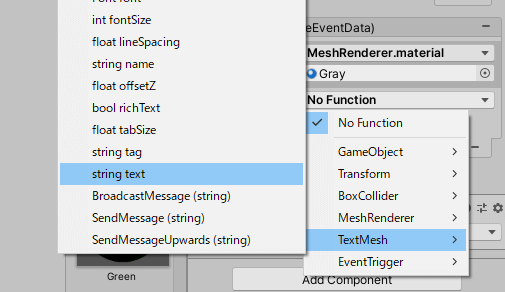 Copy and paste the original text into the text field.

Select “text_clickme” in the hierarchy window and copy “Text” Click me! 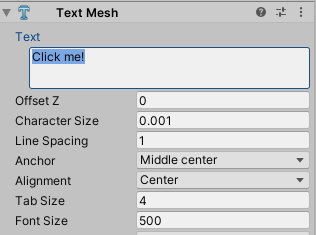 Paste the copied text into List of Pointer Exit.

All settings are now complete.

Let’s actually play it out in Unity.

In this way you will be able to create your own system based on the Interaction SDK.

Upload the interaction object you have created to STYLY.

This time we will upload a modified Spawn as a pre-fab.

Name it “Spawn2” and turn it into a prefab so that you can experience it in a VR scene.

Upload your 3D model to STYLY.