In this article, I will introduce how to create zero-gravity state in STYLY. This article is a tutorial that explains the basic functions of Unity for beginners. I will also explain how to use PlayMaker to add Collider’s to the controllers.

You can experience a sample VR scene from the STYLY GALLERY.

You can download the Unity project used in this tutorial from here. STYLY-Unity-Examples

First, download the sample project from Github, and open it in Unity. STYLY-Unity-Examples If you want to collide the controller and objects, you must pay for an asset called PlayMaker, so buy it and import it to Unity. Unity Asset Store Playmaker If you have a prepared a 3D model you want to use, import it to the project now. 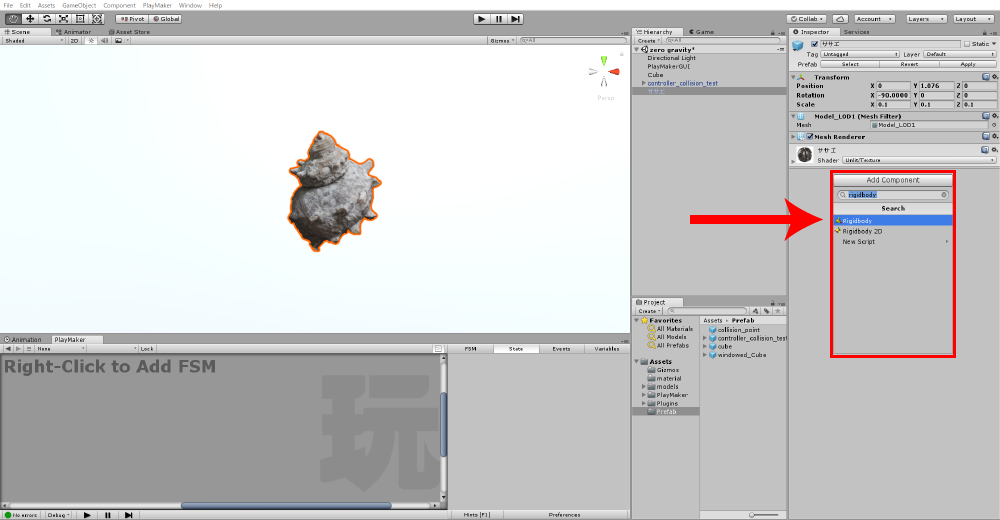 How to add Rigidbody

By adding this component, objects will move according to physic calculations. If you press the play button, you can see the object falling due to gravity. Next, change the Rigidbody settings, and uncheck the “Use Gravity” option. 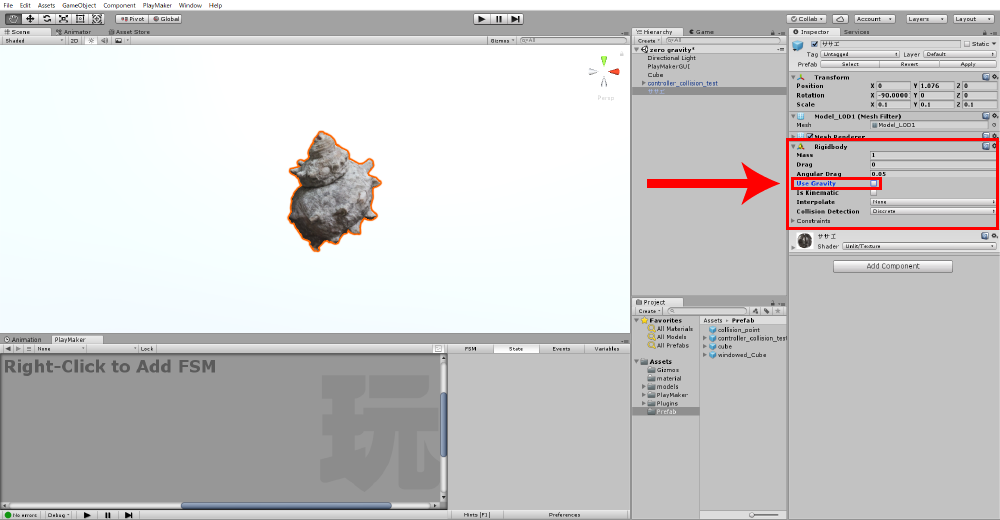 If you press the play button now, the object will not fall and stay floating in the air. You have created an object in zero-gravity.

You have completed applying zero-gravity to the object but let’s set it so that the object can collide into another object. In order to collide objects in Unity, setting a Rigidbody is not enough, and you have to add a Collider component. By adding this component, the object will gain a collider, and you can detect collisions. Let’s add a Collider to the object we created in the previous step. 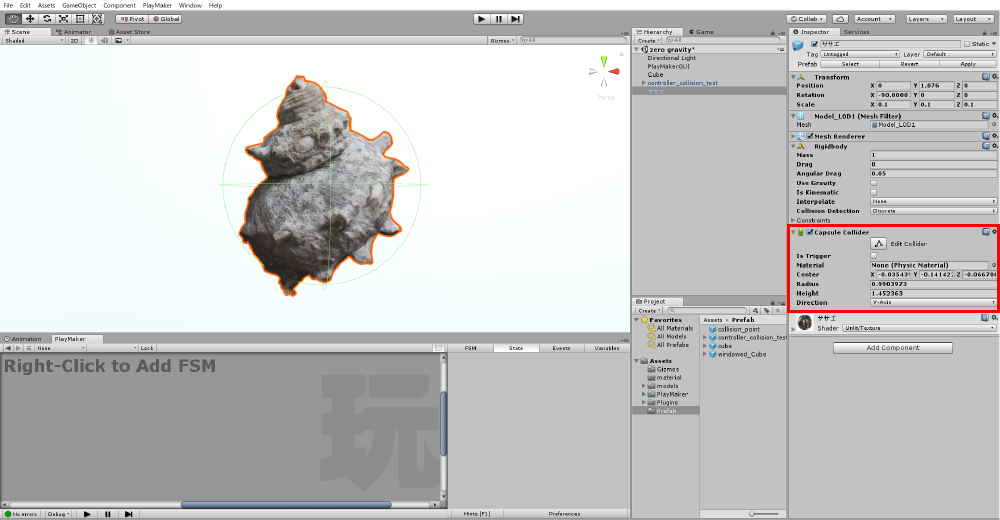 There are different kinds of Colliders, such as “Box Colliders”, and “Sphere Colliders”, so please choose the Collider that best suits the 3D model. (If in doubt, choose “Capsule Collider”)

Adding Colliders to other objects too

Using the same process, add Collider components to the other objects in the scene too. In the sample project, I made a wall. 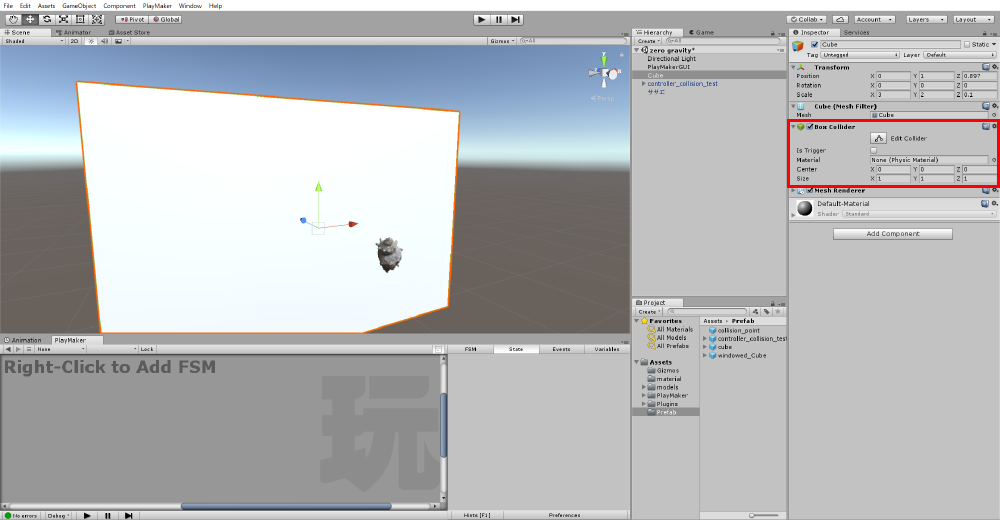 Adding Colliders to other objects in the Scene

Now, we are done preparing the zero-gravity object and can now collide with other objects.

Setting how objects bounce off each other

Next, we will set how the objects will bounce off each other when they collide. If you don’t change this setting, since the object’s default bounciness is set to 0, the object will not bounce. To set the object’s bounciness, create a Physics material, and attach it to the object. 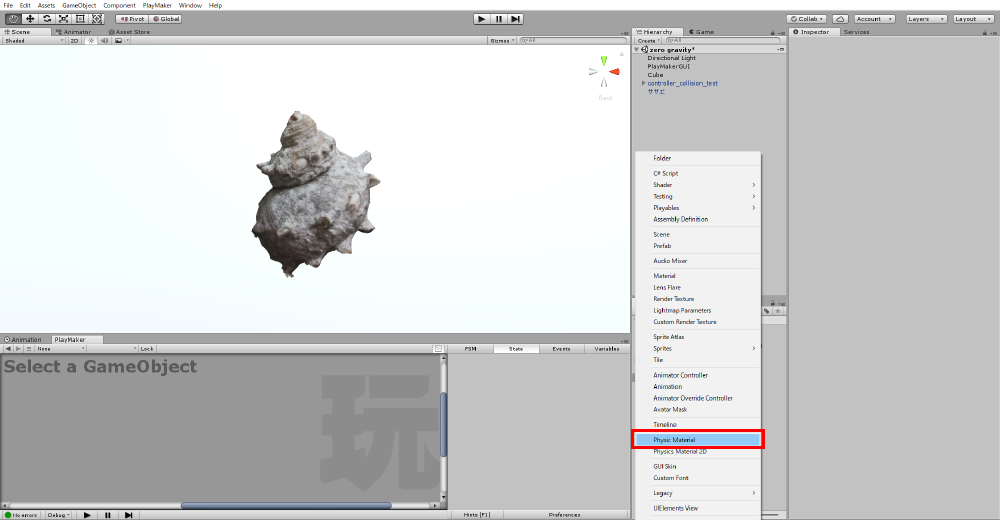 Creation of a Physic Material

By selecting this, the settings of the Physics material will open in a new tab. Locate the “Bounciness” setting. By setting the Bounciness to a number between 0 – 1, you can change the Bounciness of the object. In this sample, I set the Bounciness to “0.6” to achieve a standard bounce effect. Then, set “Bounce Combine” to “Maximum”. 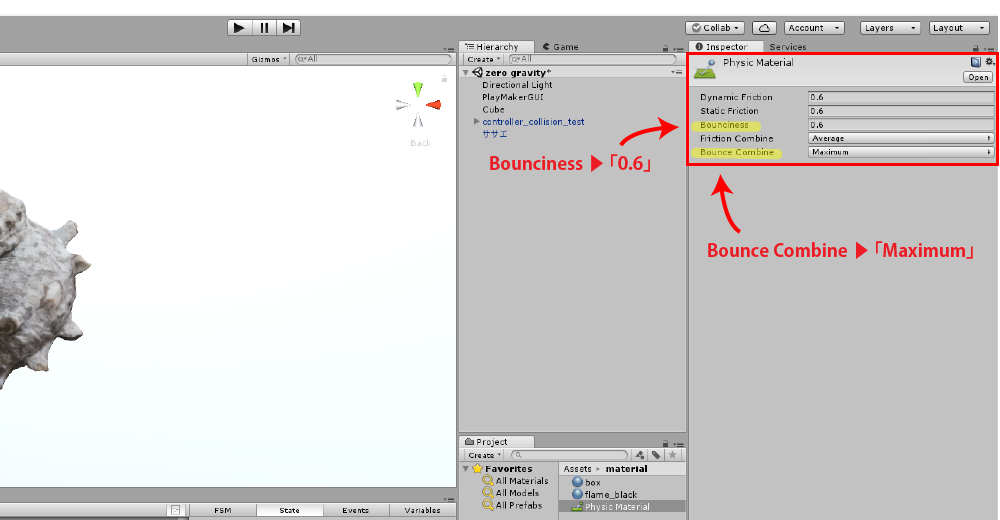 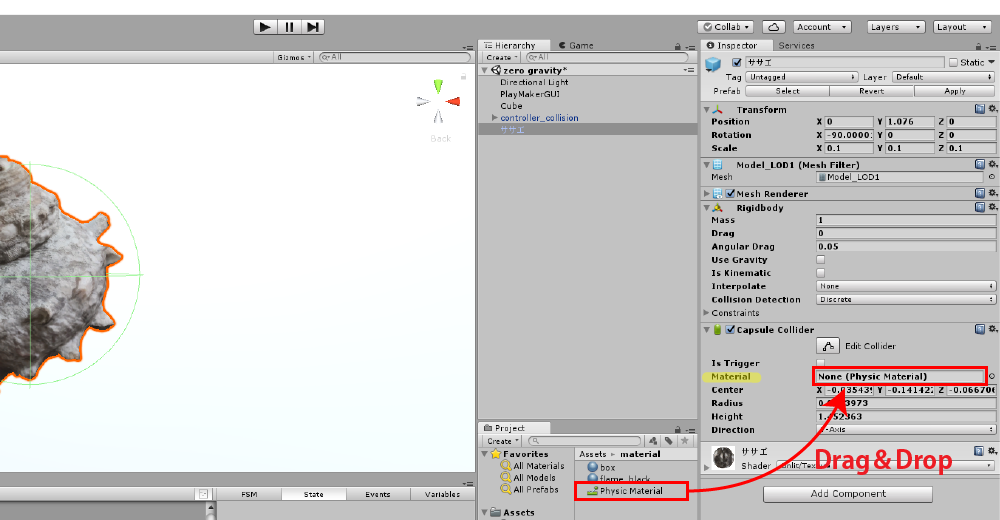 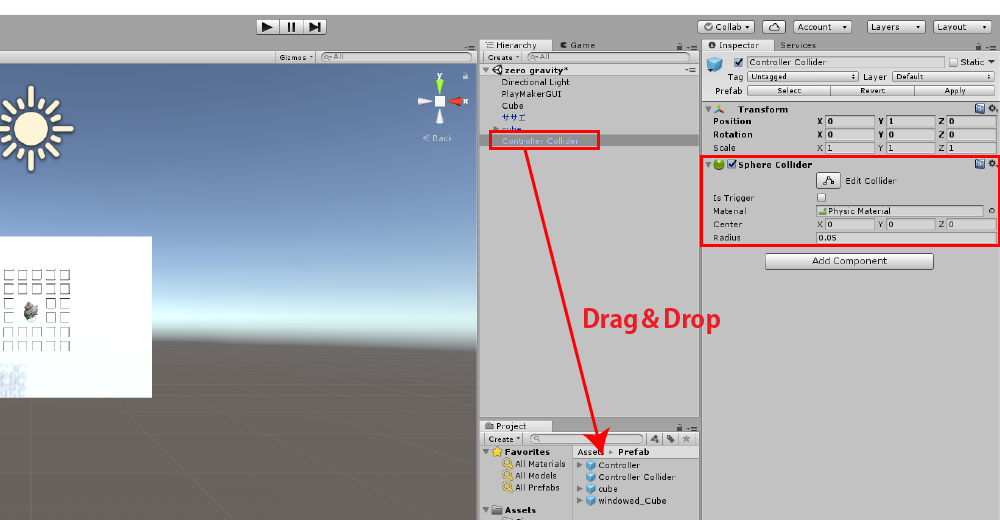 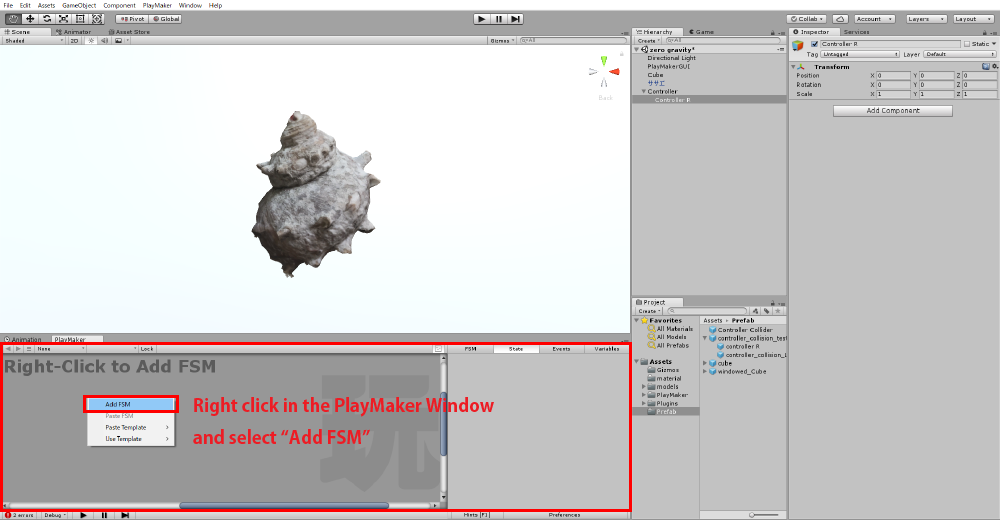 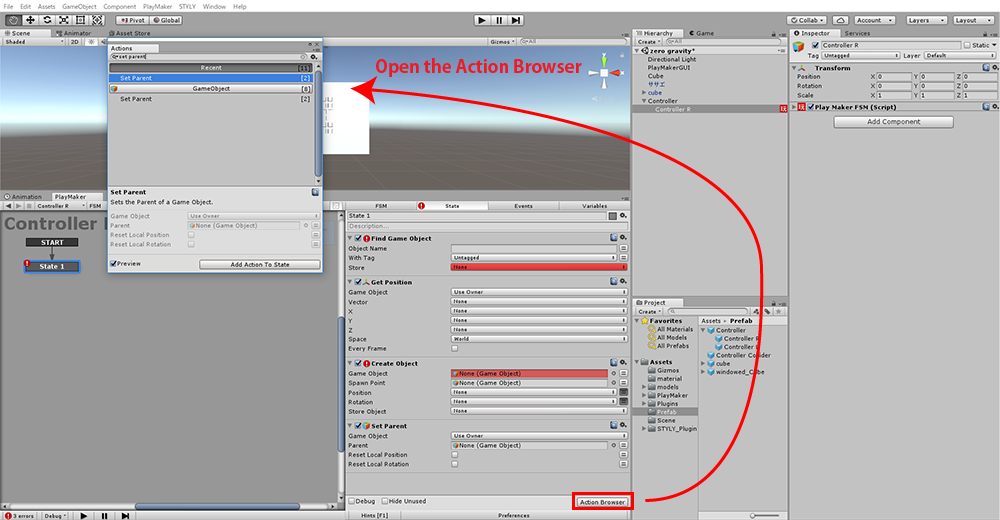 How to add Actions 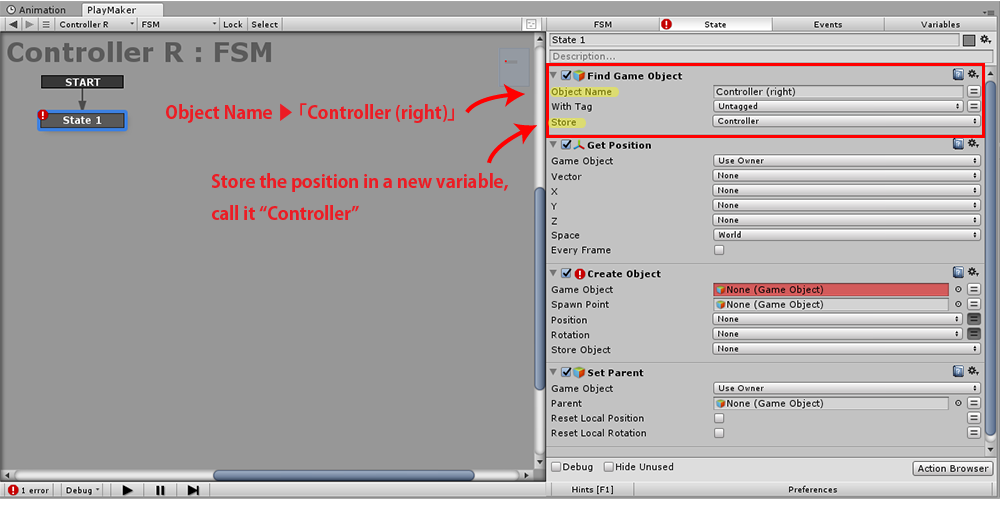 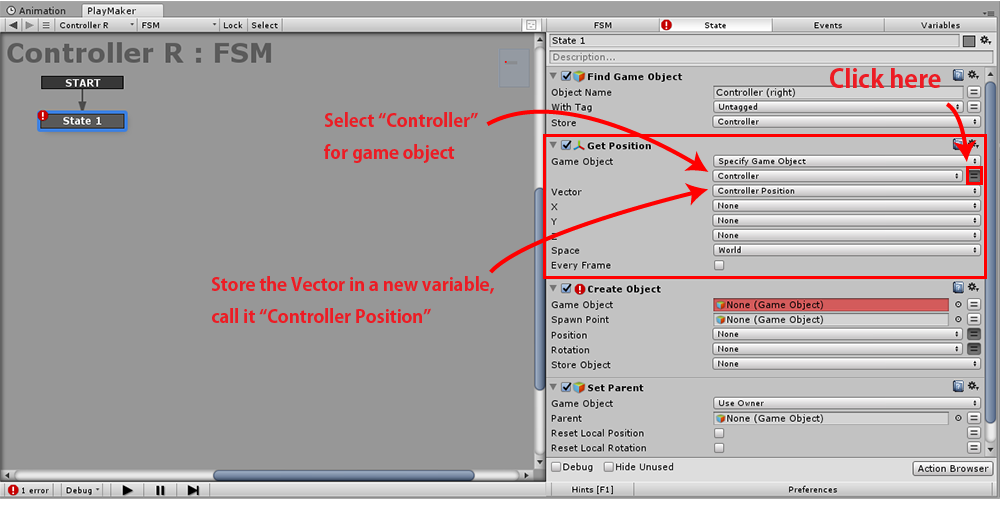 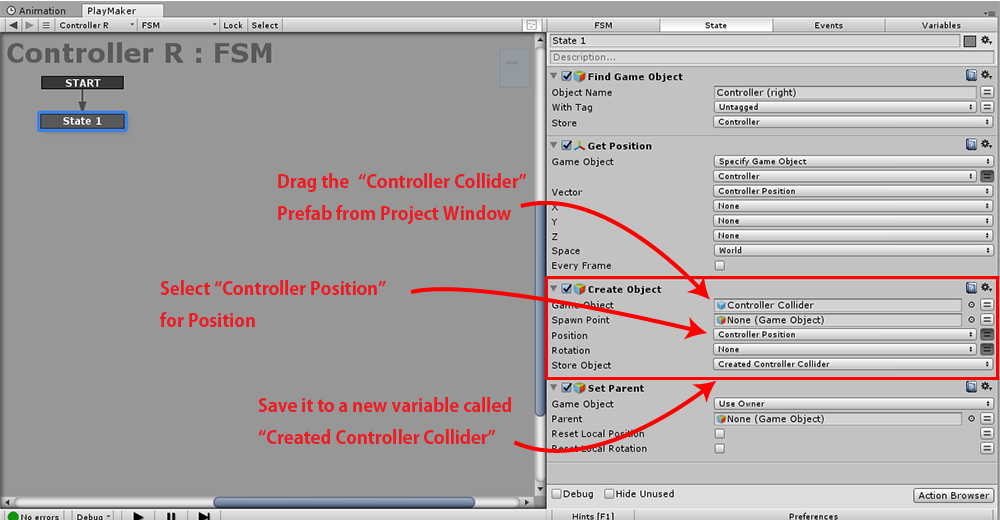 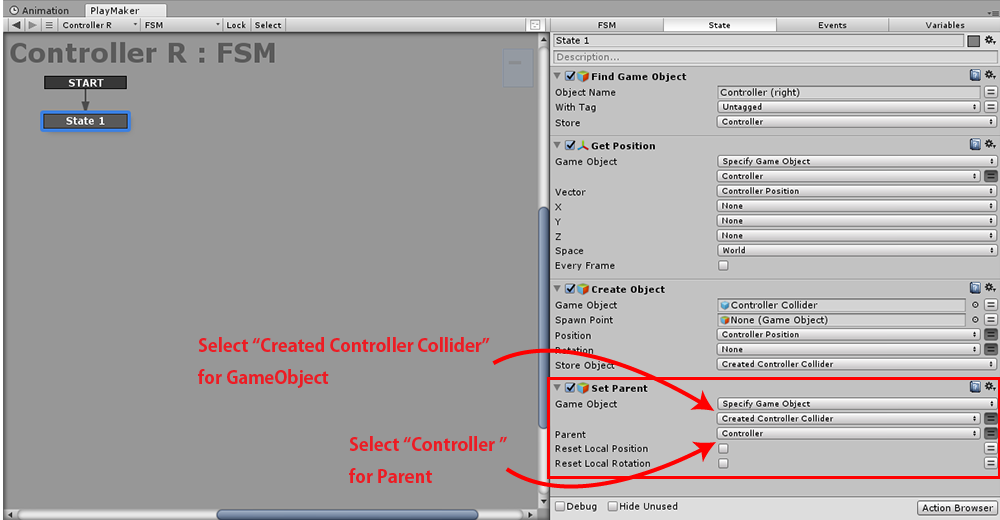 If you need to add a Collider to the left-hand controller too, duplicate the “Controller R” object, name it “Controller L”, and change the “Find Game Object” Object Name to “Controller L”. We are done with the setting of the Collider now.

Uploading the scene to STYLY

Finally, uploading the scene to STYLY! Take note that you are not uploading Prefabs, but you are going to upload the whole scene to STYLY. STYLY adds Colliders automatically to uploaded Prefabs, so if you upload Prefabs to STYLY, there is a possibility that it will result in unexpected behaviors. If a scene is uploaded to STYLY, no Colliders are created. So, if you want to use physic simulations using Colliders and Rigidbodies, it is better to upload the whole scene to STYLY. Uploading scenes to STYLY is very easy. Make sure that there is nothing unneeded in the scene, and save it. The Main Camera is unneeded, so make sure you delete it. Once you save the scene, go to the Project window, select the scene, and click “Upload Prefab or Scene to STYLY”. To learn details of the Scene Upload Function, please read the article below. How to use the Unity Scene Upload Function Once the upload is complete, import the scene to the STYLY editor. If you touch the objects with the controller, they will float around in zero-gravity. In this article, I introduced how to apply zero-gravity to objects using the Unity physic simulation functions. You can create many other effects by using physic simulations. Please experiment!!