STYLY Studio has an onboarding function.
By completing this tutorial, you will be able to learn the basic operations of STYLY. 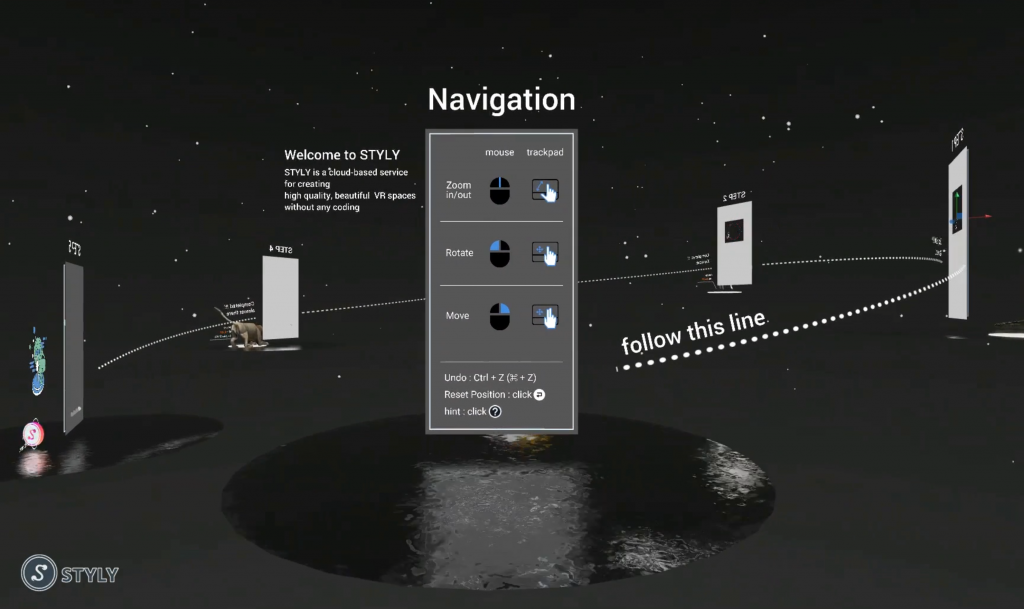 How to start the tutorial scene

When STYLY Studio starts, click “CREATE” in the upper right. 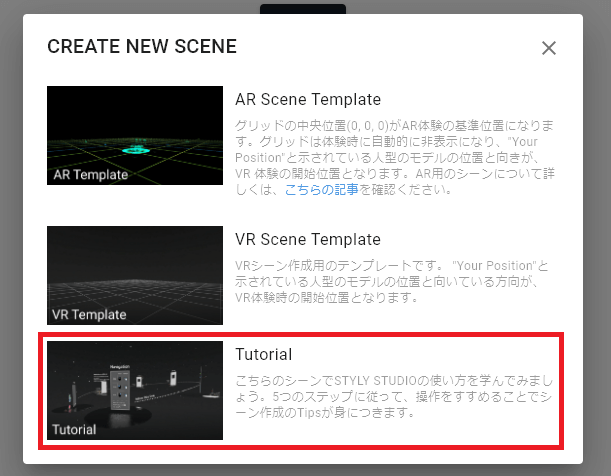 Complete 5 steps in the tutorial scene

There are 5 steps in total in the tutorial scene, and you can learn the basic operation of STYLY by clearing the steps one by one.

If you make a mistake and want to cancel the operation, you can cancel the previous operation by pressing Ctrl + Z (⌘ + Z).
Also, if you do not know where you are while operating, you can reset to the viewpoint when the scene is loaded by clicking the reset position button on the right edge of the screen.

In STYLY, you use the mouse or trackpad to operate.

Reset Position：Click the reset position button on the right edge of the screen
Help：Click the help button in the hierarchy window (displays how to operate shortcut keys, etc.) Let’s move the crocodile placed in the scene to the white circle.
To move an object with STYLY, follow the steps below. 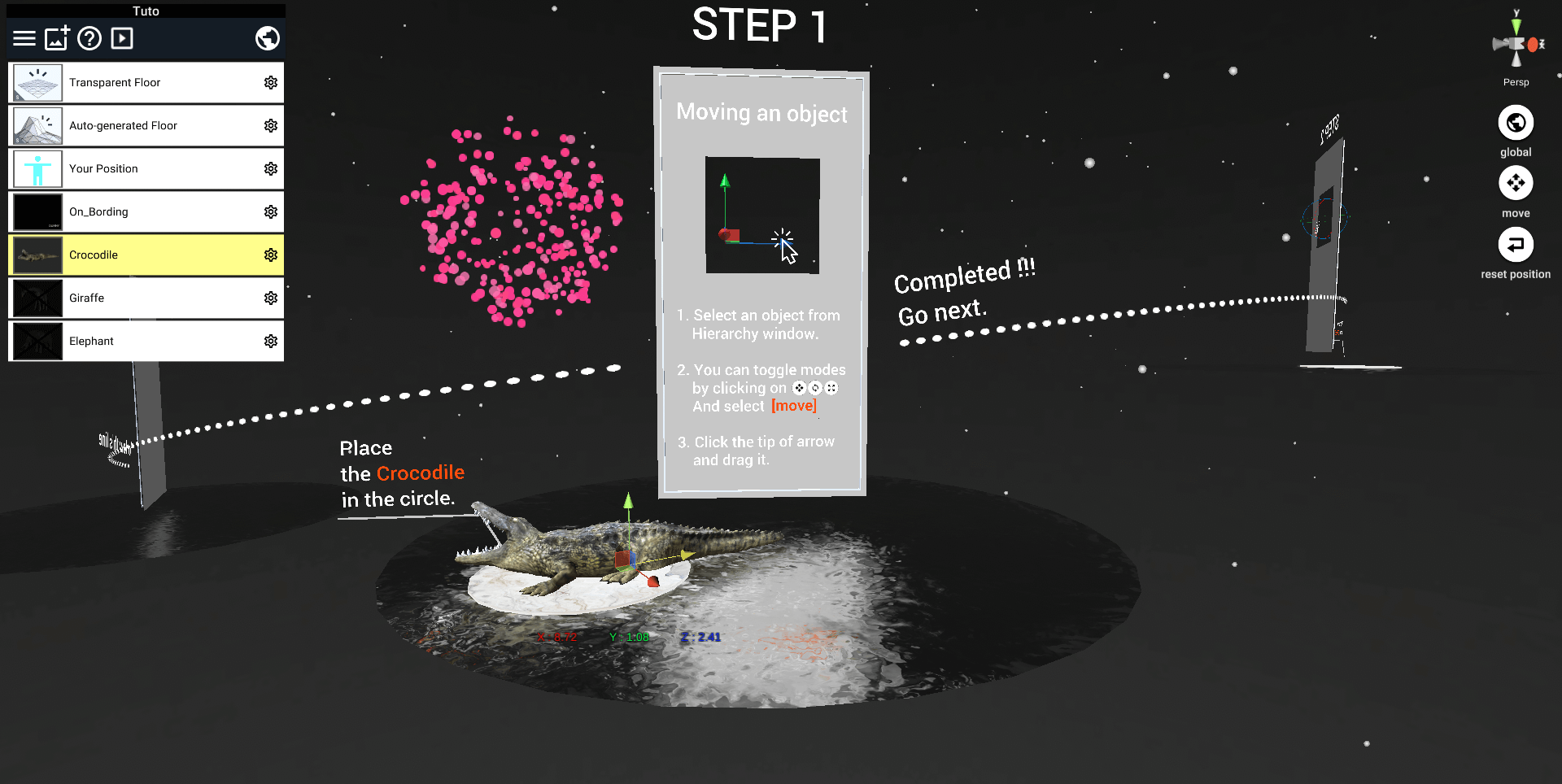 If you move the crocodile to the white circle, it will be cleared and fireworks will be launched.
Let’s move on to the next step. 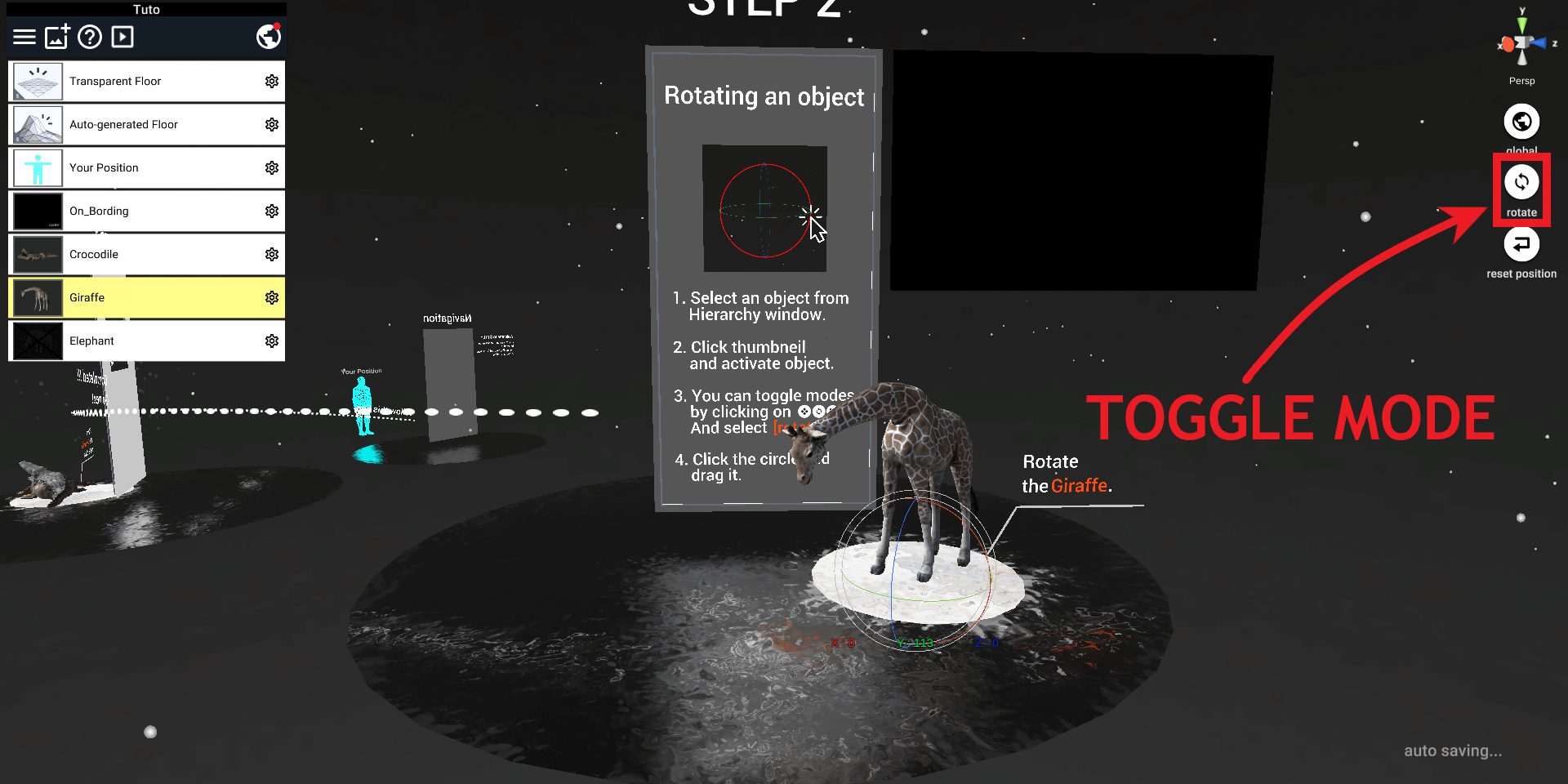 Let’s rotate the giraffe placed in the scene.
To rotate the object with STYLY, follow the steps below. 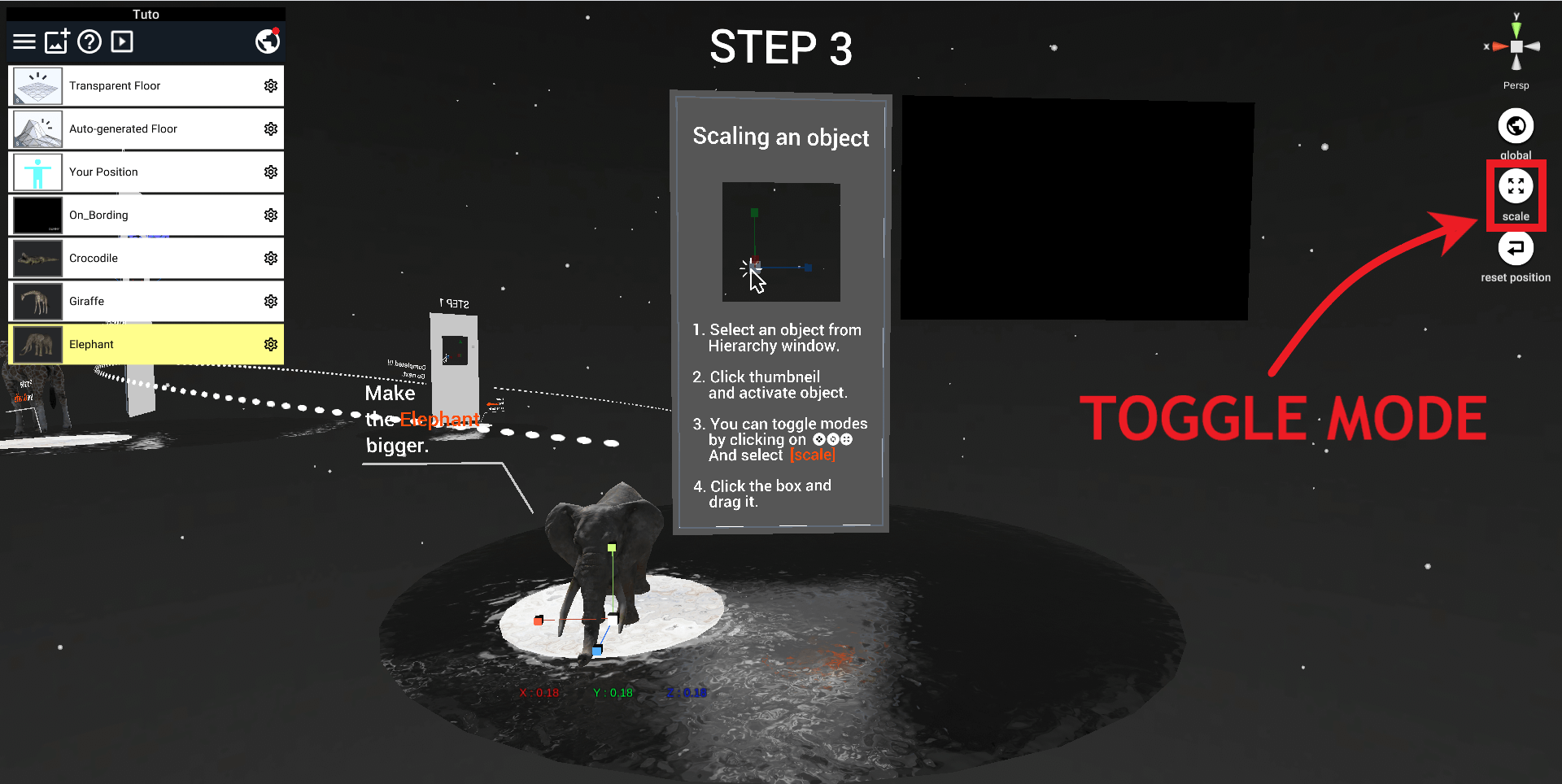 As with STEP02, click the “elephant” thumbnail in the hierarchy window to activate the object.

Let’s change the scale of the elephants placed in the scene.
To scale an object in STYLY, follow these steps: 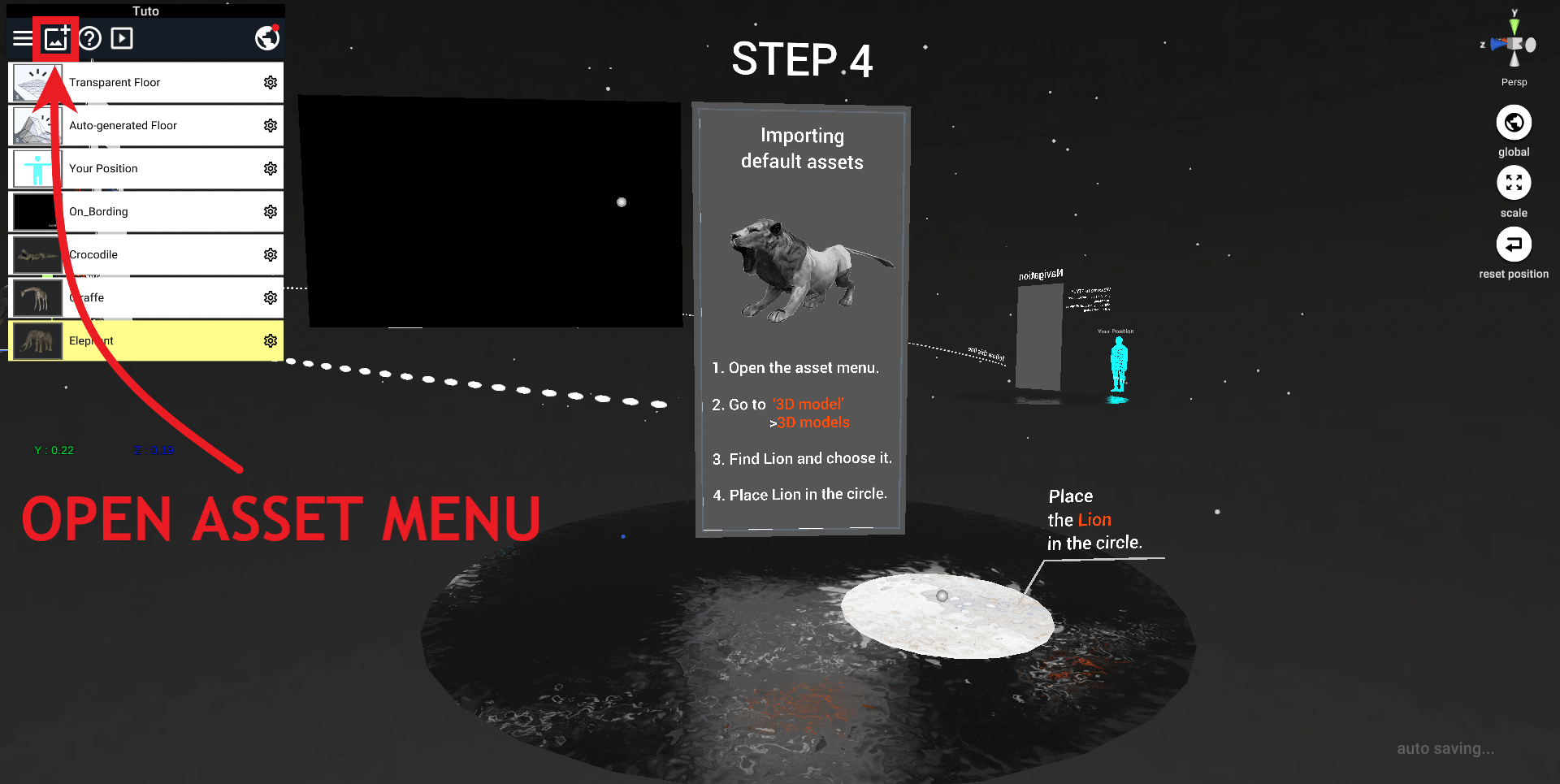 In STEP04, you will learn how to add new assets to your scene.

Click the Assets button at the top of the Hierarchy window to open the Assets menu.
Then select “3D Object” and select ”Model”. 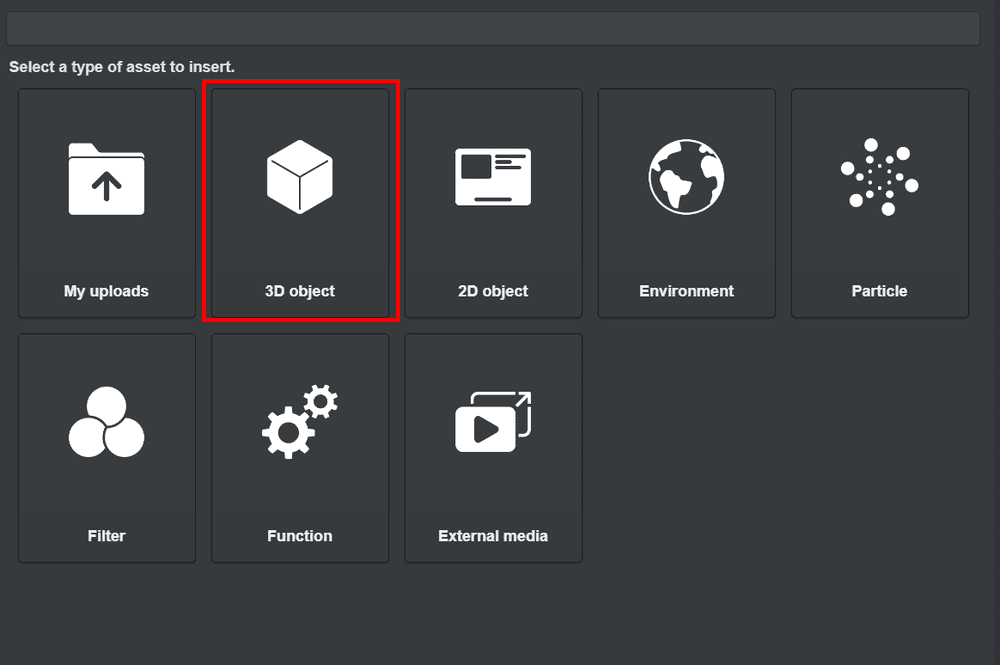 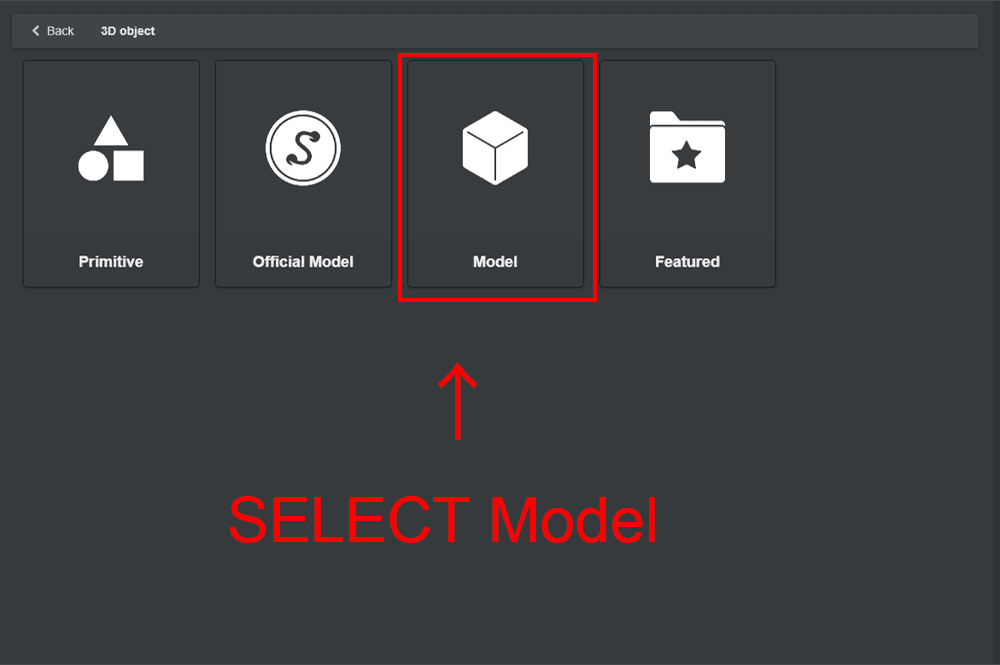 When the 3D Model menu opens, and look for the 3D model of the lion.
If you find it, please click it. A lion is placed in the scene. 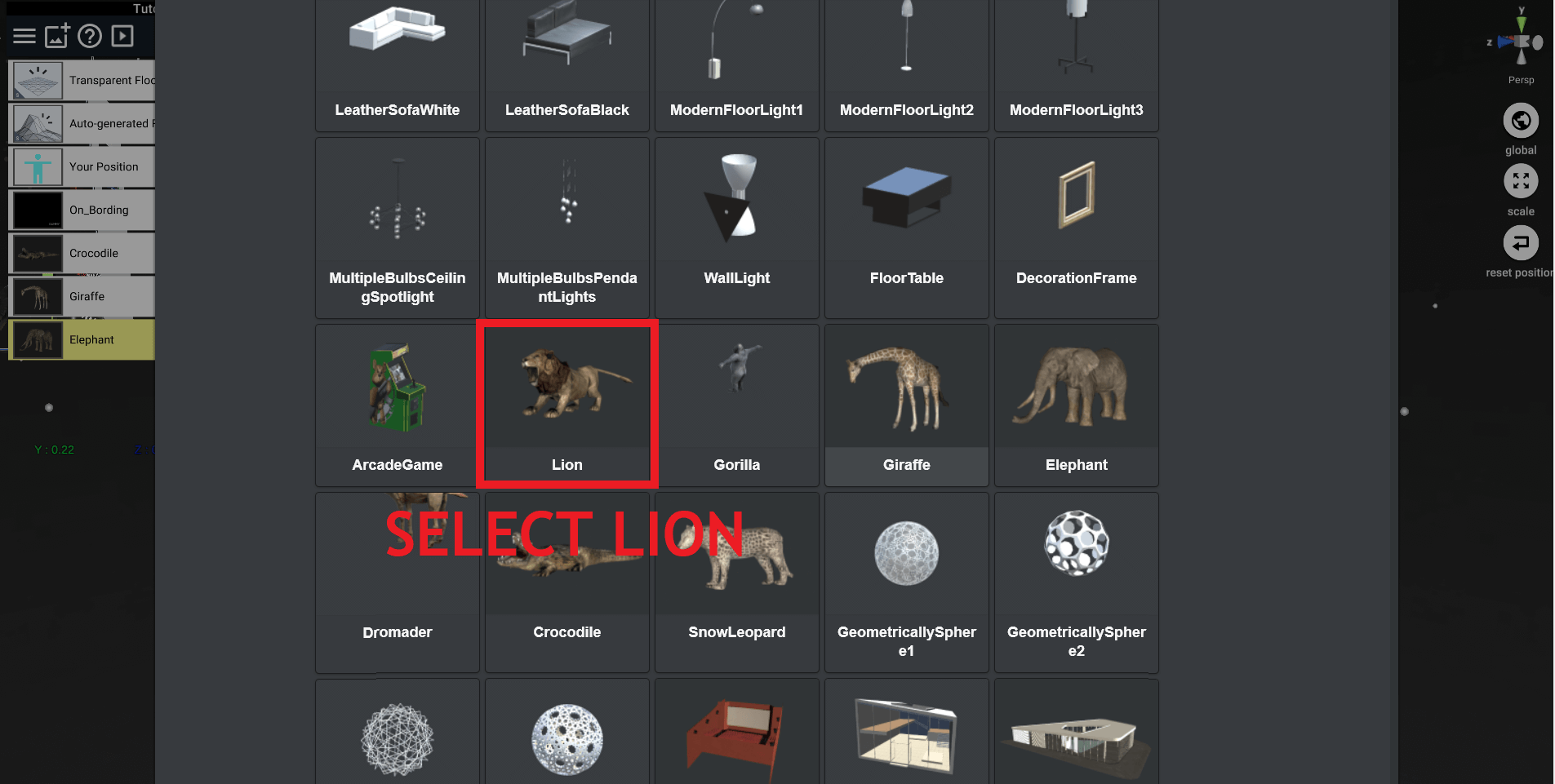 After that, let’s move the lion to the white circle by the same procedure as STEP01. 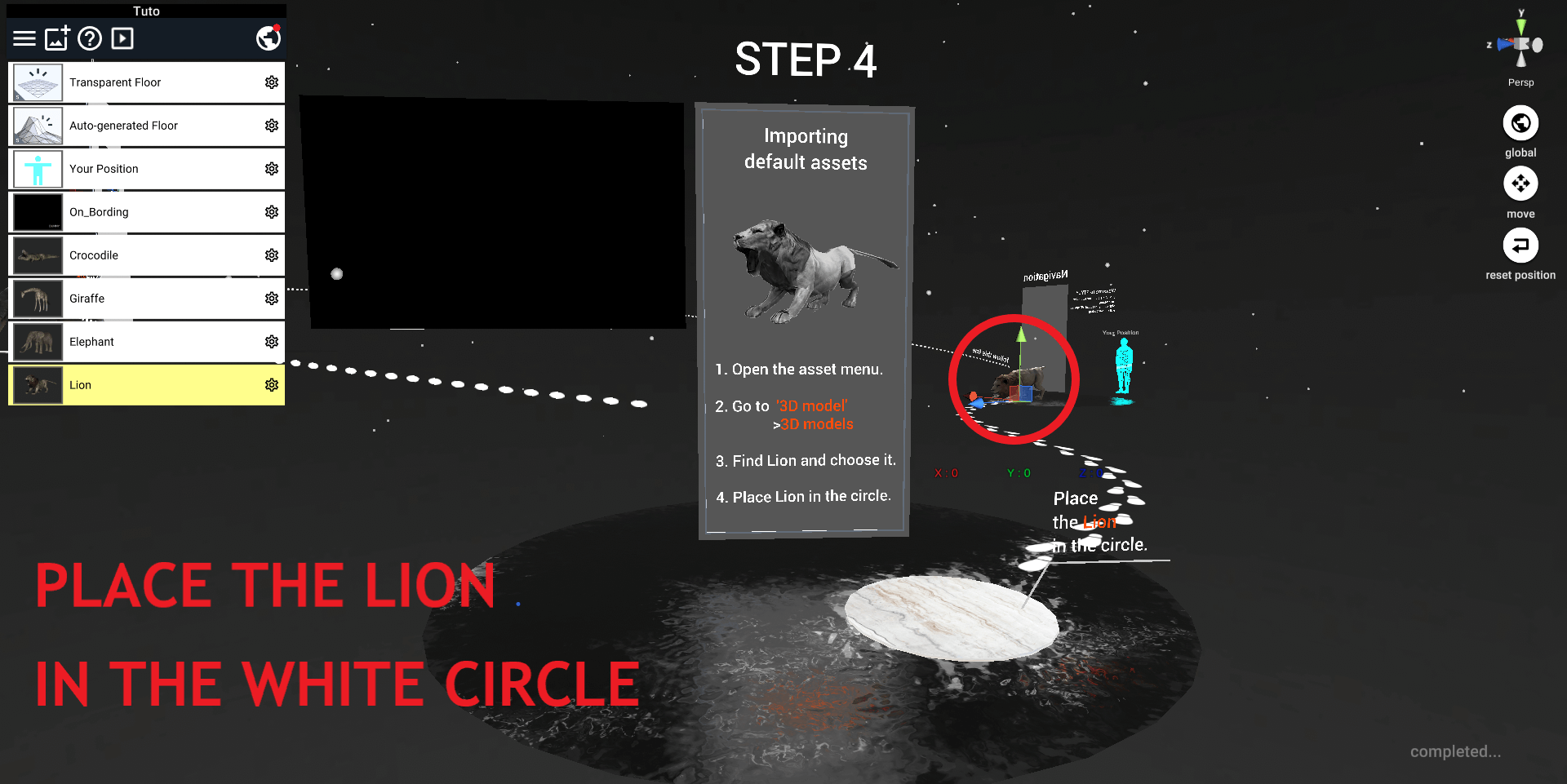 Move the lion to the white circle

STEP05 introduces other tips.
When you have finished reading what is written on the board, click on the STYLY logo at the bottom of the board.
The following tips will appear. 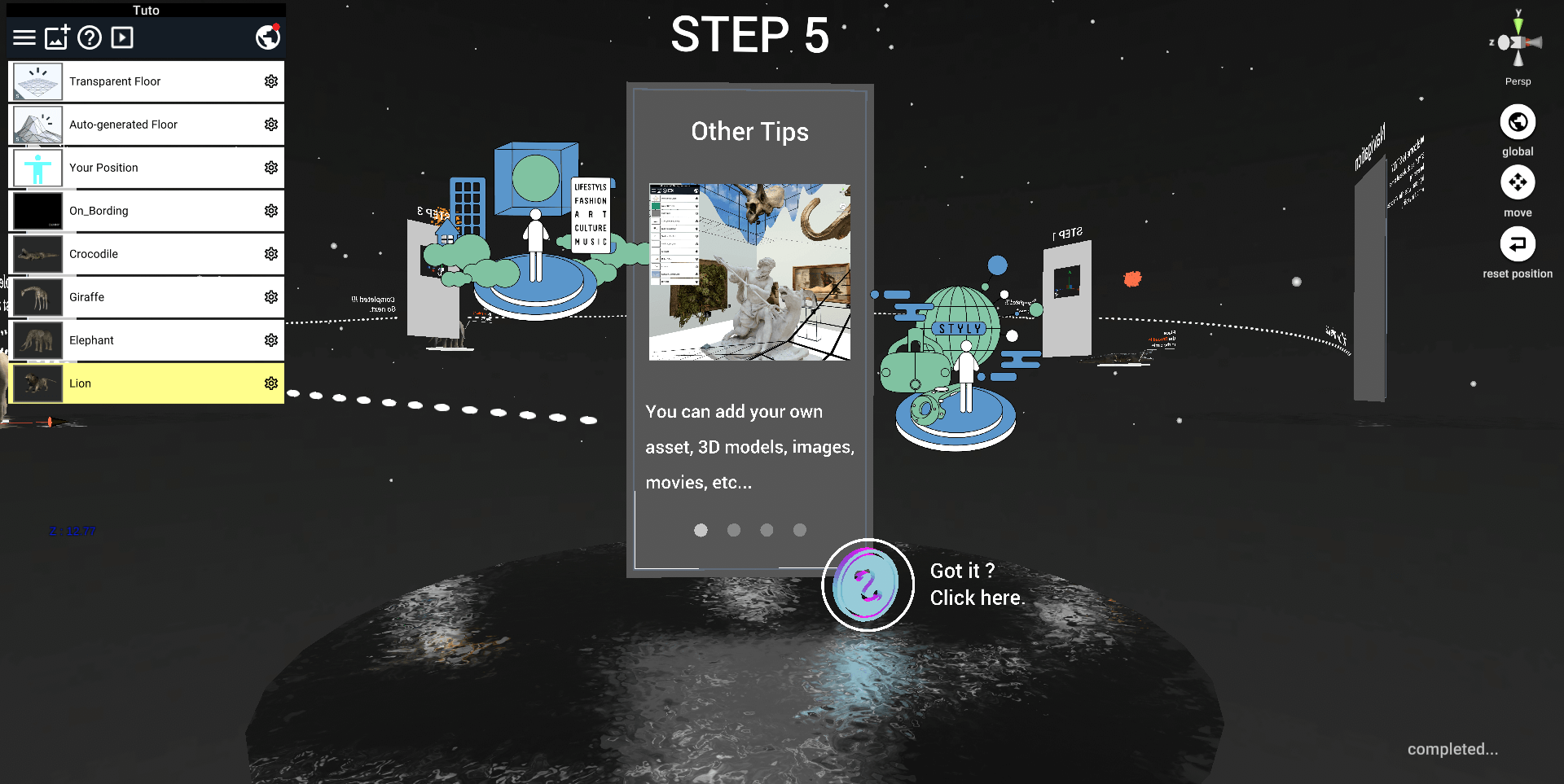 STYLY Studio allows you to place 3D models, images, videos, etc. in your scene.
You can read more about what you can put in your STYLY scene in this article. Other tips-Shooting with a camera-

* Currently, press the Play mode button in the hierarchy window.
STYLY Studio has a camera function that allows you to shoot scenes in STYLY Studio.
You can make the created scene look more attractive by making it into a video.
The camera function is introduced in detail in this article.

How to Use the Camera Function in STYLY Studio 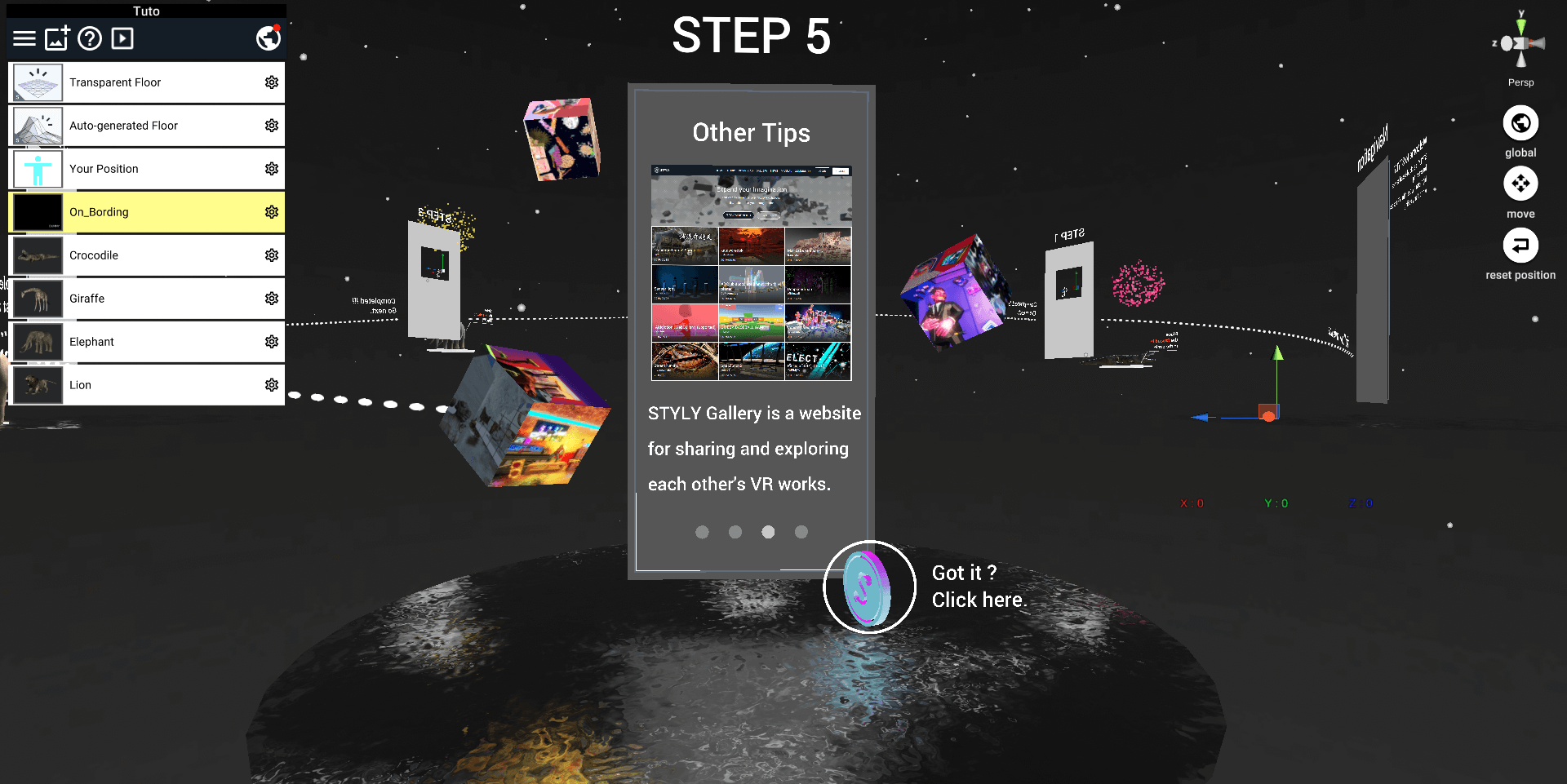 STYLY Gallery is a gallery site where you can browse the scenes published in STYLY Studio.
VR scenes created by artists from all over the world are gathered, and there are already over 10,000 scenes. 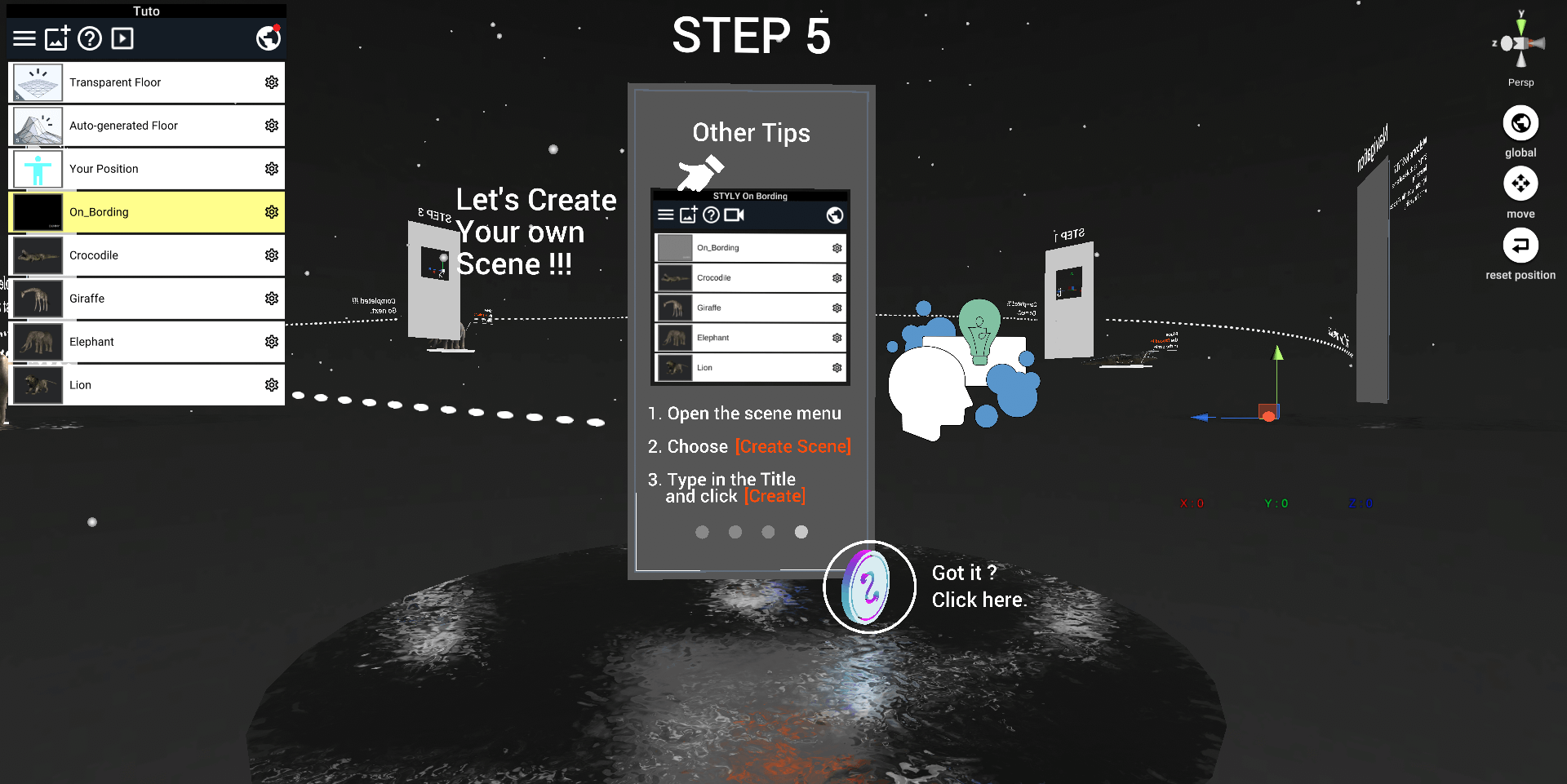 Other tips -Create a new scene-

Tutorial to learn how to create and publish scenes 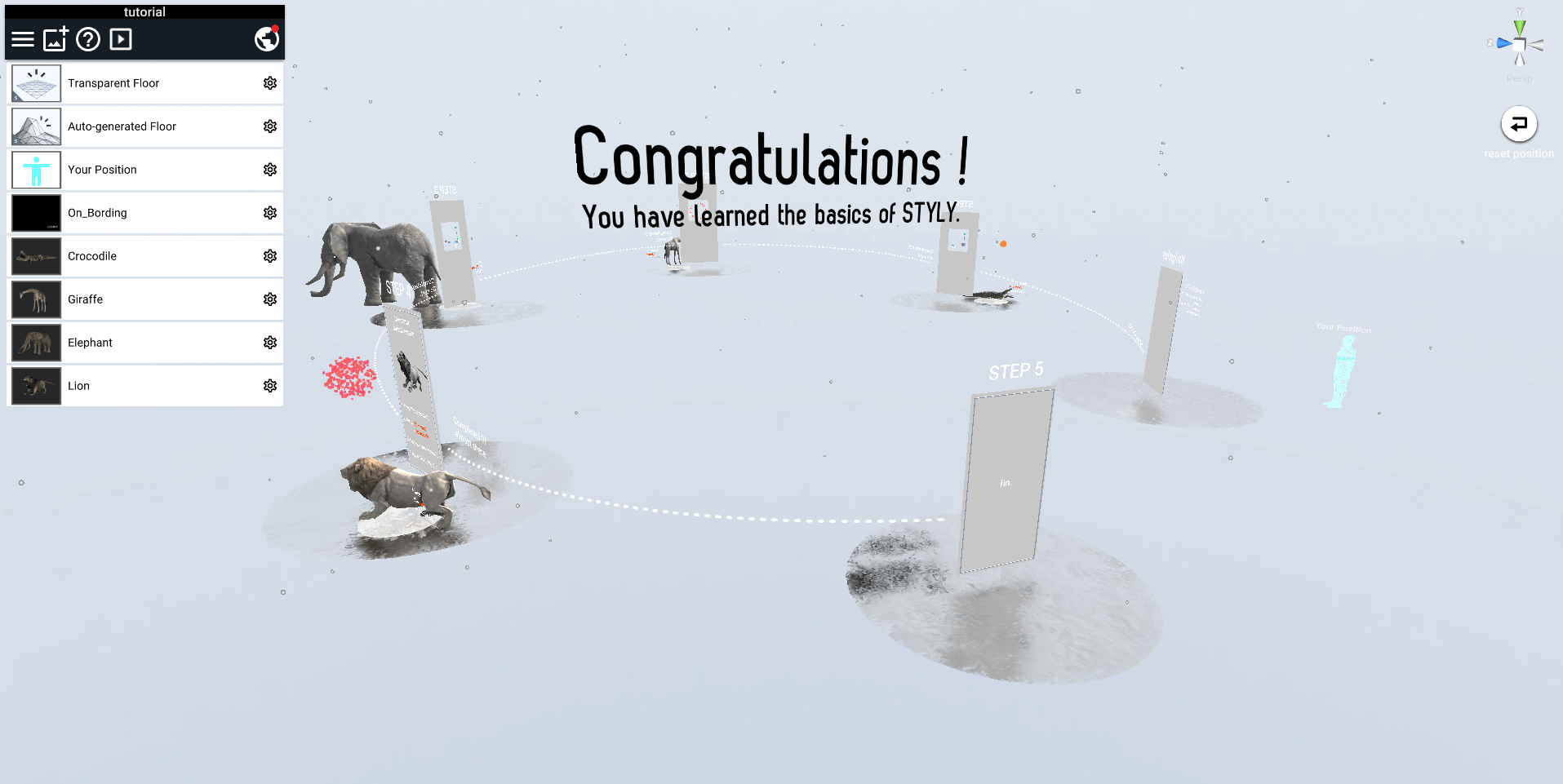 After reading all the tips, the color of the sky will be reversed and the onboarding will end.