How Did I Make ‘Zeniarai Benten VR’

I am Ryu lilea (Ryu Fujiwara / Pursuer of Architecture Visualization / a member of xRArchi, a community to explore the possibility of xR and architecture). In this article, I will talk about my attempt to create an architectural digital archive with wide-area photogrammetry.

On the subject of ‘Zeniarai Benten VR’, I would like to share my knowledge in a series of three articles.

The number of photos used and the covered area by the ‘Zeniarai Benten’ photogrammetry are:

Why Did I Make This? – An Attempt at Architectural Digital Archive

Before starting to explain the details, I would like to mention why I tried this kind of wide-area photogrammetry.

I am sure that you remember the recent ‘Notre-Dame de Paris fire’ where a lot of people felt devastated. Why is it so sad to see a building on fire? I could say it’s because a building is not just a ‘container’ of things but it includes and stores ‘culture’ and ‘memory’. Therefore, people have a special feeling about buildings, I think.
In my opinion, archiving a building not only records the shape, but also preserve the culture and memory in it. In other words, it preserves ‘history’.
Some say it’s just a copied space but everyone values it differently. If you were related to the building more deeply and for a longer time, you could find it not ‘just a space’.

And, in recent years, it’s getting popular to use architectural data as a ‘digital twin’. I also think that it could have something to do with ‘Common Ground’ proposed by architect Mr. Keisuke Toyoda (Please refer to this about ‘Common Ground’).
There are several ways to achieve it. The modelling by BIM could be the one. While people are looking for a suitable way, I focus on ‘Photogrammetry’ and ‘Point Cloud’. ‘Point Cloud’ requires an expensive laser scanner. On the other hand, Photogrammetry just requires a camera. This time I used a digital SLR but you can also use the camera on a Smartphone.

Doing wide-area photogrammetry is something that you can start immediately and it is practical for everyone. I wanted to try and share this knowledge. That is why I made ‘Zeniarai Benten VR’.

Well, this was a long introduction…

Starting now, I will explain about ‘how I made Zeniarai Benten VR’ step by step with actual examples.

Taking wide-angle images is important for Photogrammetry.
EOS 6D has a ‘full size’ CCD sensor, which allows you to take a ‘wider angle’ image even with the same lens.

I use a photogrammetry software, 3DF Zephyr (I will explain the details in the next article). In the software manual, 1/2.3 inch or larger sensor is recommended.

I used a wide-angle lens.

When applying photogrammetry, it takes a longer time to process more photos. However, you could reduce the processing time with a wider-angle lens because it allows you to cover the site’s view with less number of photos. It’s preferable to use the widest angle lens in the recommended range above.

※Although 25 to 50mm is recommended in the manual, I used 12mm this time. It’s simply because I chose it before reading the manual carefully. Please be aware that super-wide angle lens could distort the view, so it could compromise the precision of Photogrammetry (I would like to investigate the difference of the precision between 12mm and 25mm on another occasion).

For wide-area photogrammetry, photographing takes time but you still need to complete it as quickly as possible because the photographic condition changes as time goes by.
Don’t use a tripod as there is no time to settle the camera with it. If you take photos in low light condition, it’s more practical to use a monopod, which has higher mobility.

Photographic Environment and Your Outfit

The following conditions are preferable.

For Photogrammetry, A ‘neutral’ photo is easier to post-process.
Especially for conversion into VR, the photo shaded by direct sunlight will generate the VR space incorrectly, casting multiple shadows when the lighting is applied in VR.

In the case of a busy area such as a sight-seeing site, to prevent people from being in the generated texture, it’s recommended to take photos in the early morning when people are not around. Also, before the sun rises, you can take photos under the ‘neutral’ light condition explained earlier.

For this example, it took about four hours to take photos. Fortunately, I took photos smoothly because the weather was light rain so there are few visitors. Although I recommended cloudy weather earlier, moist cobblestones in a shrine are also picturesque. So light rain could also be a good condition.

For the areas where you don’t need to worry about having people in the view, then daytime with bright conditions is preferable.

This is to prevent you from being reflected in the glass as much as possible.

Basically, Photogrammetry cannot process the reflective surface correctly but there are some exceptions.

The Settings for Photographing

Low f-number makes the background blur to create a ‘depth’ effect. However, in the case of Photogrammetry, a blurred image could cause an error. So take photos with ‘Pan Focus’ (the blur-free condition with the entire view visible clearly). As a guideline, use f9 for the standard lens. For a super-wide-angle lens, use around f5.6 because excessive f-number could cause a ‘diaphragm’ blur.

2. Higher ISO Sensitivity Can Be Used

For a normal photo, I understand you want to reduce the noise as much as possible because that single photo itself becomes the artwork you create. However, in the case of Photogrammetry you don’t need to worry about it so much because the textures are generated by multiple photos.

This kind of wide-area Photogrammetry requires the larger texture size in proportion to the area of the site. But, on the other hand, the texture size is limited to 8k in Unity, so the resolution is reduced and, therefore, you cannot recognize the noise anyway.
So it’s recommended to lower the aperture (apply higher f-number) rather than lowering the ISO sensitivity.

3. Changing the Aperture is Not Problematic

When taking photos continuously, the changing of aperture is not problematic.
Whilst a sudden change disturbs the quality of the texture, Photogrammetry can correct gentle changes when photographing.
So you don’t need to be strict about keeping the aperture constant.

When photographing a wide area, you need to plan the route to take photos across the site. The important points are:

Taking more photos while staying at a place can improve the precision of Photogrammetry, however it could collapse if you went far and then come back to the same place.

In particular, a height difference on the site could cause a problem. When I came back to the starting point and took the photos at a different height, Photogrammetry generated a step that doesn’t exist in reality.
Move along a ‘one-stroke’ route as much as possible and never come back to the same place to ensure a good result. 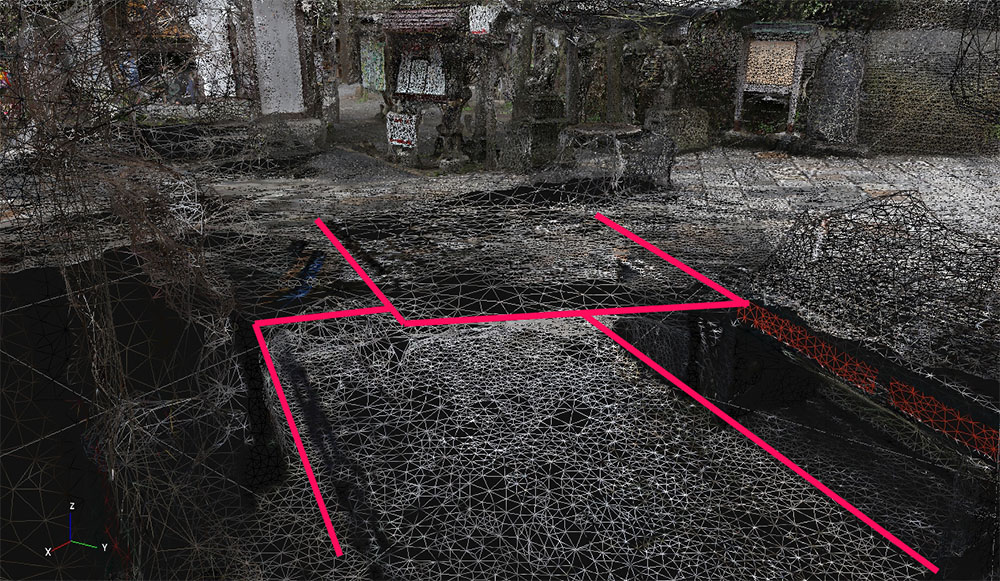 A step has been generated where the ground is level in reality.

2. Do Not Return in the Same Route

It’s similar to the ‘one-route’ technique above. Please be aware that going and returning in the same route could be problematic
When I use the photos that were taken while going and returning in the tunnel around the entrance, Photogrammetry generated an unrealistic branched shape for the tunnel due to the difference of the photos taken in the ‘going’ and the ‘returning’ trip.

This has nothing to do with photographing but the ambient sound plays an important role in Architectural Digital Archive.
If you don’t have a microphone, a smartphone is sufficient.
Use sponge or fur on the microphone to record clear sound without wind noise.

We use this recorded sound for the BGM when creating the VR space.

Thank you for reading this article.
The next article will explain how to apply Photogrammetry by using 3DF Zephyr.