In this article I introduce the ability to transition to a different scene while experiencing a scene.
This can be achieved with the custom action “Change STYLY Scene” in Unity’s PlayMaker.

What is custom action?

PlayMaker comes with a variety of functions for creating game logic and interactions.
Each of these functions is referred to as an action.

In STYLY, multiple actions are implemented independently in order to expand the expressive power in VR / AR scenes.
These “uniquely implemented actions” are called custom actions.

Custom actions can be used by downloading the STYLY Plugin for Unity (PlayMaker is required to use custom actions).

Also, please refer to the following article for a list of custom actions available in STYLY.

This is a sample scene created to reflect the content in this article.
*This scene is for VR only.

Change STYLY Scene” will only work in VR environment.

In order to use Change STYLY Scene, you need to use Unity’s PlayMaker.

Use “Change STYLY Scene”, which is a PlayMaker custom action stored in the Unity Plugin for STYLY.
If you haven’t downloaded it, do so beforehand.

Custom actions are stored in the “STYLY” column of PlayMaker’s Action Browser. 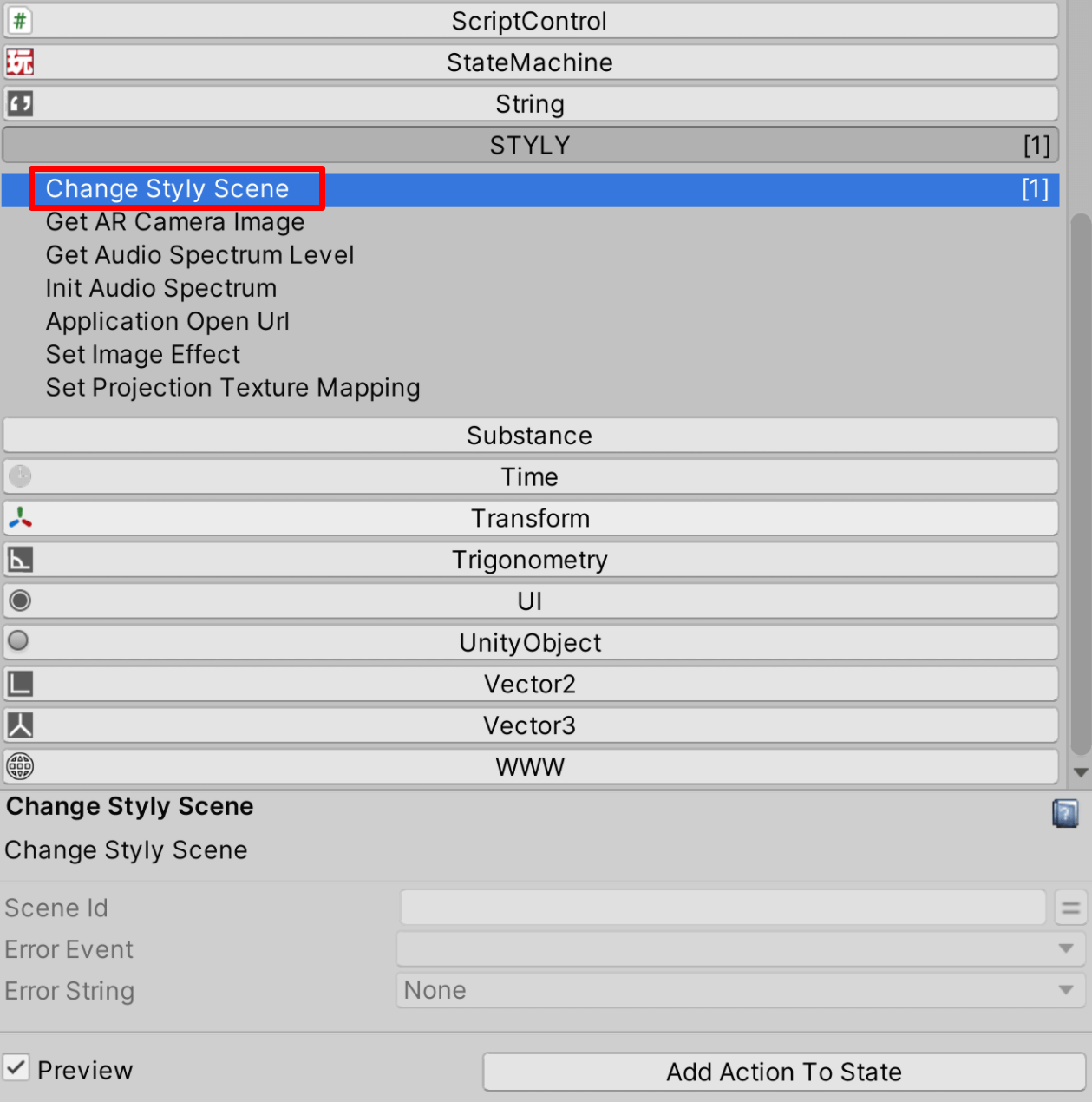 This action allows you to transition between scenes.
By combining it with other actions, you can transition the scene with any trigger.

In this article, we will create a scene that transitions when the cube is touched with the controller.

First, we will create a field that will serve as the foundation.
In the Hierarchy window, right-click and select “3D Object > Plane” to create a Plane. 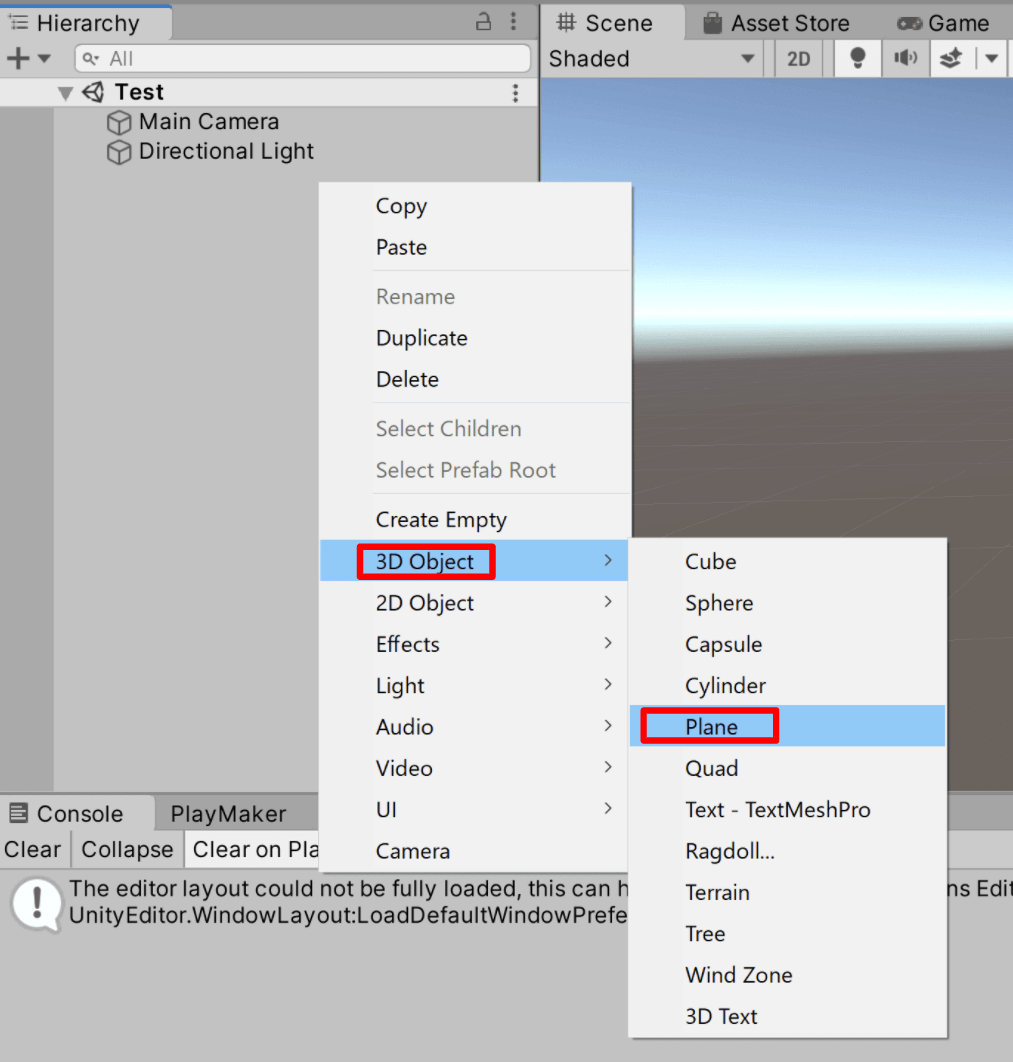 Next, we will create a Cube that will be the trigger.
In the Hierarchy window, right click and select “3D Object > Cube” to create a Cube. 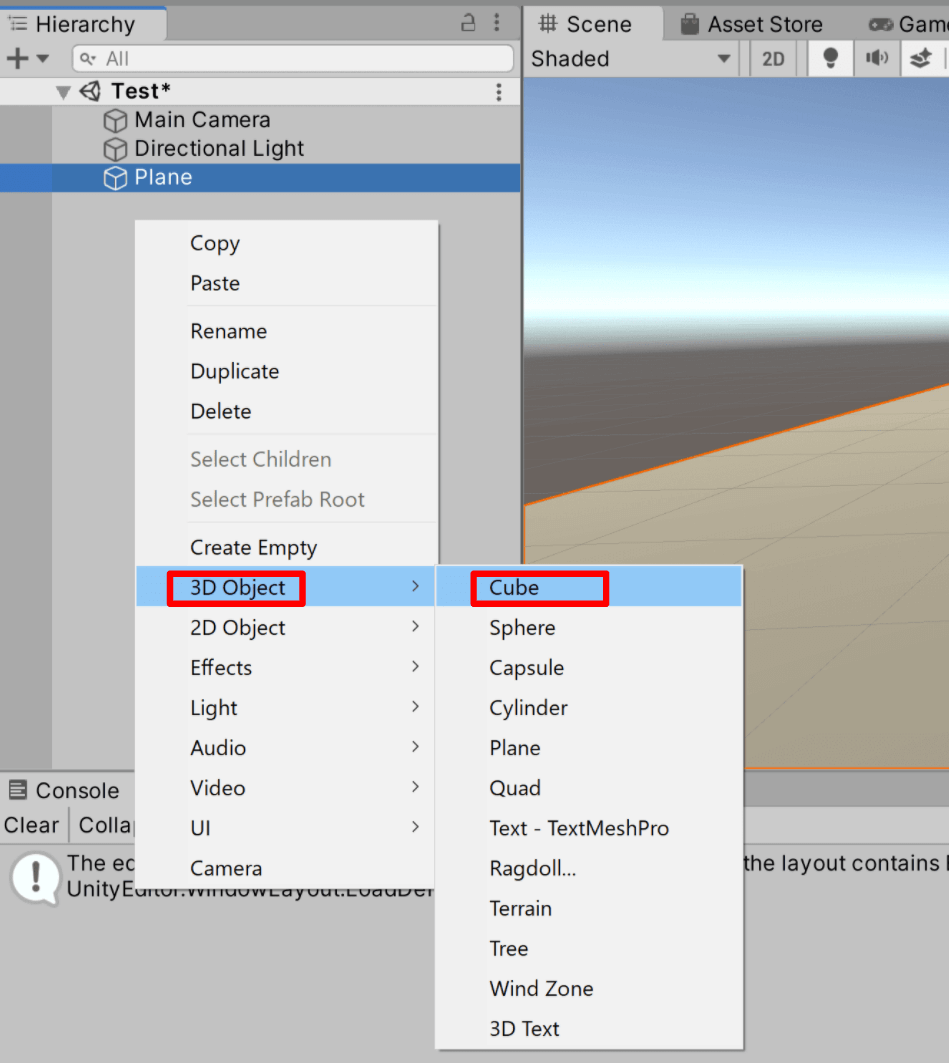 Select the Cube from the Hierarchy window.
Next, right-click on the PlayMaker Editor and select “Add FSM”. 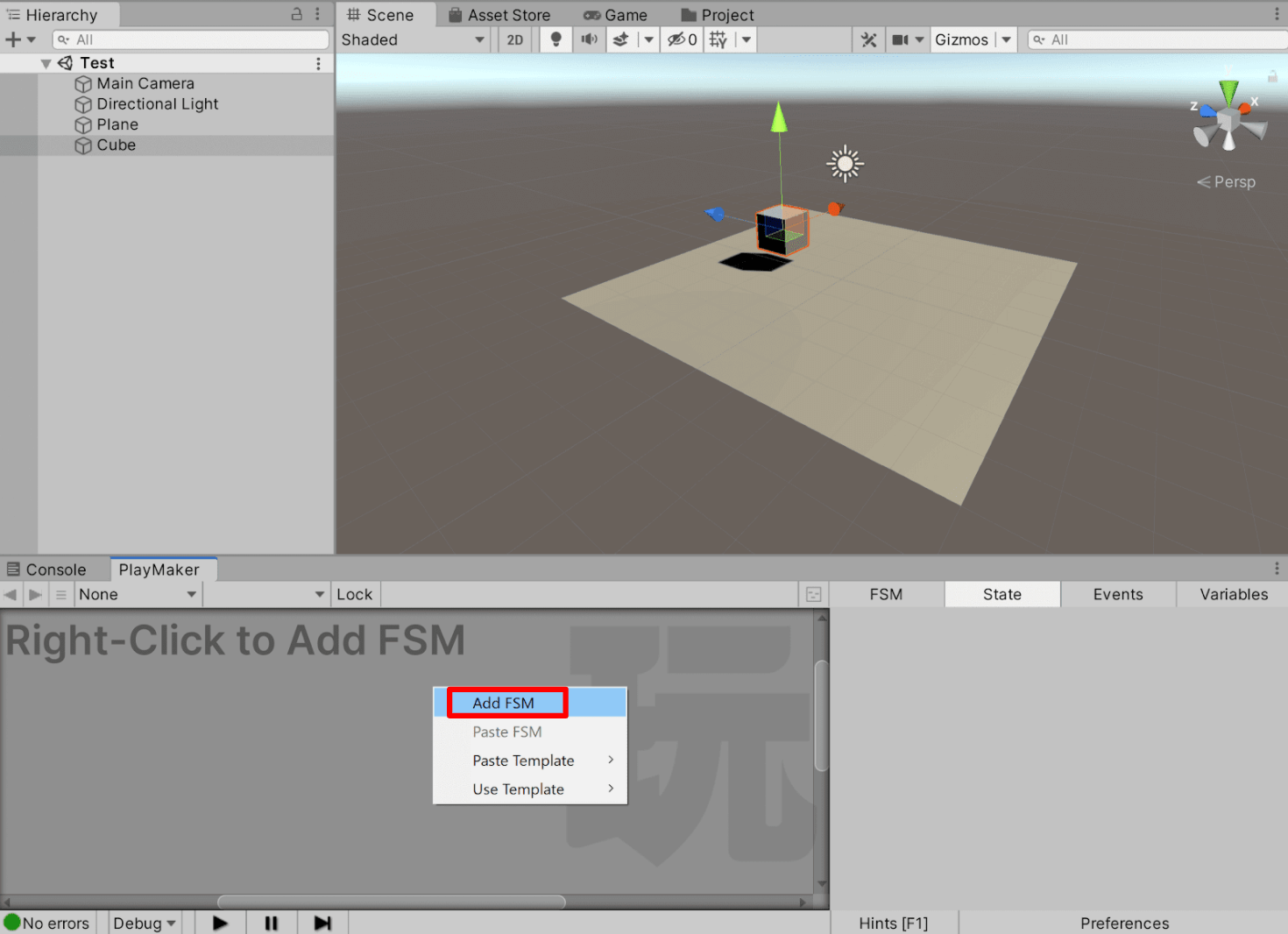 The next step is to set up the trigger for contact with the controller.
Right-click on State1 in the PlayMaker Editor and click “Add Transition > TRIGGER ENTER”. 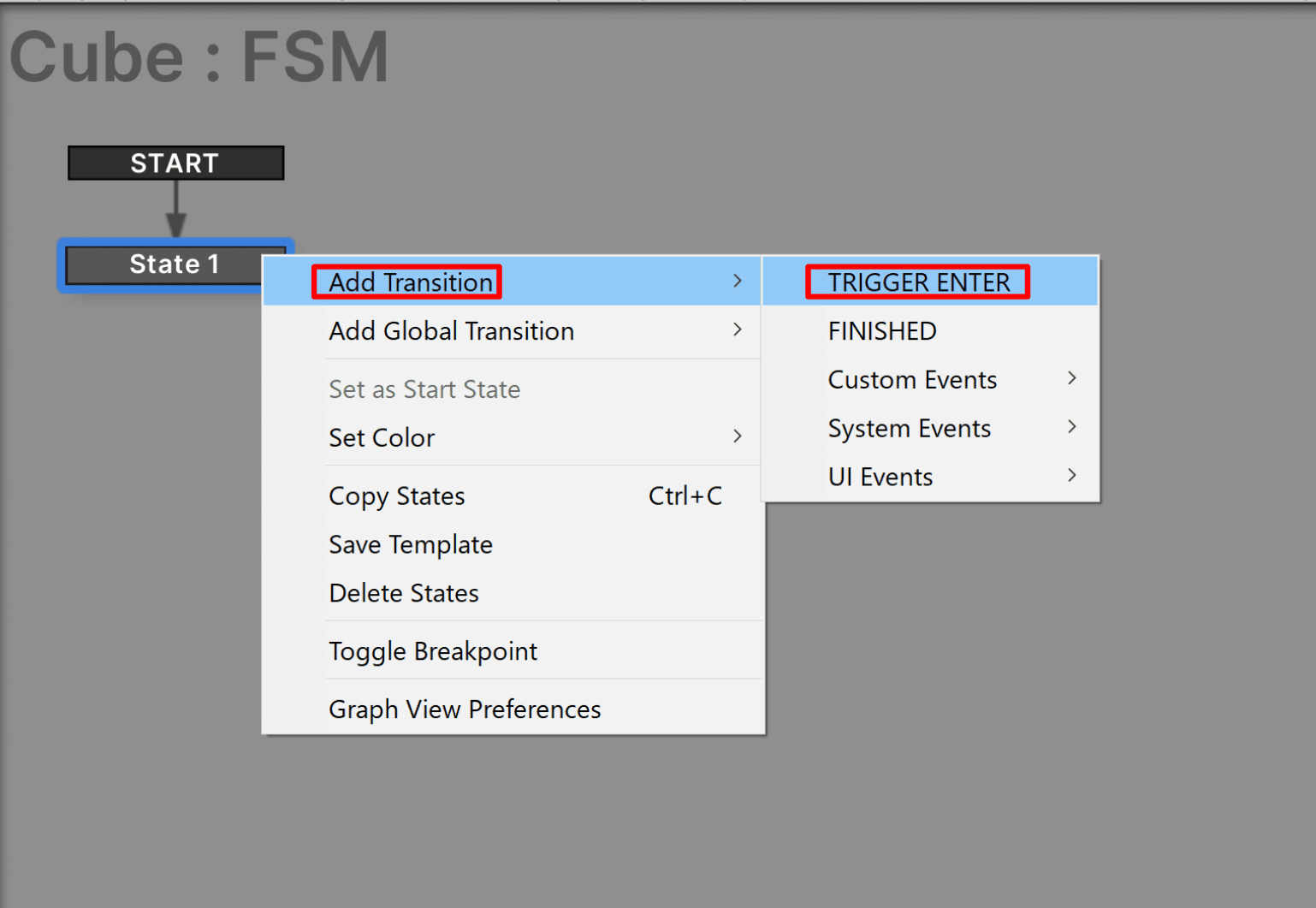 Add a State to define the behavior of the controller when it comes into contact with the controller.
Right-click on a blank area in the PlayMaker Editor and add “Add State”. 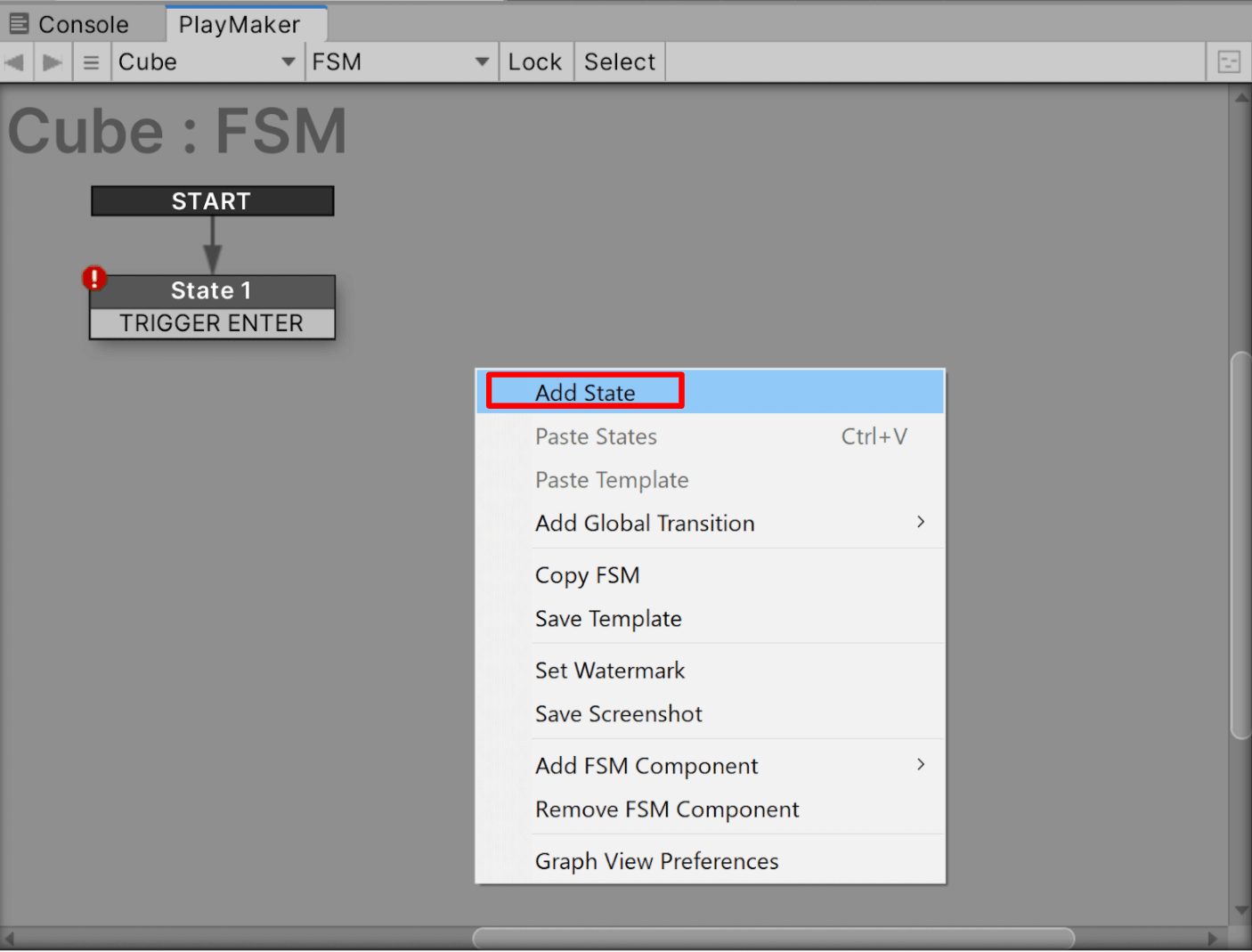 Configure the settings to link State1 to State1.
Click and move the part that says “TRIGGER ENTER” and a blue arrow will appear.
Move it to the location of State 1, and release the click. 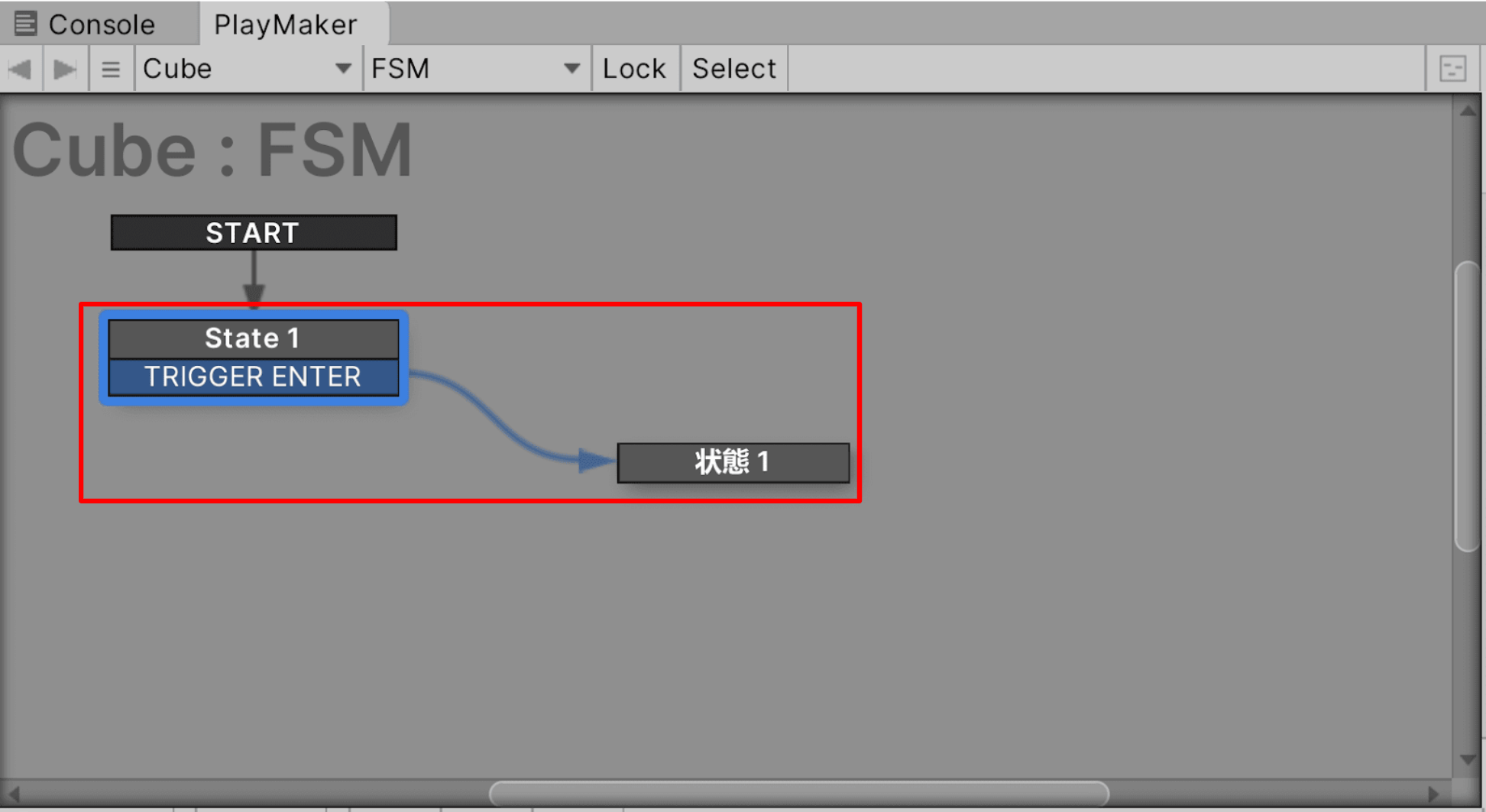 After clicking on state 1, search for “Change STYLY Scene” in the “Action Browser” and add it to the State.
Then, enter the ID of the scene you want to transition to in Scene Id.

In this article, we have explained the custom action of Change STYLY Scene.
As shown above, it is possible to create a scene that transitions when touched with a controller.

Let’s actually upload the scene to STYLY and use it.
In this case, we will upload the Unity scene directly to STYLY, so please refer to this page.