This article introduces the STYLY Local Preview Tool, which allows you to view your scene in the STYLY VR app without having to upload assets you have created in Unity to STYLY.

If you are creating a STYLY scene in Unity, then you have to go through the following steps before you can see that scene in the STYLY VR app or VR goggles:

1. Create assets for STYLY in Unity.
2. Upload assets from Unity.
3. Place assets in the STYLY Studio.
4. Check in the STYLY VR app.

With the STYLY Local Preview Tool, you can skip steps 2 and 3 above and view and experience assets created in Unity directly in the STYLY VR app on your PC.

This STYLY tool makes it easier to navigate between creating (and modifying) your assets in Unity and previewing them in STYLY, making you more efficient in your production process.

There are a few limitations to using the STYLY Local Preview Tool:

To use the STYLY Local Preview Tool, you will need the following:

*To build the STYLY app environment, please refer to the following article.

To use the STYLY Local Preview Tool, you will need the latest version of the STYLY Plugin.

You can download the STYLY Plugin from the link below.

If you have already imported the plugin, please make sure it is up to date.

How to Use the STYLY Local Preview Tool

1. Import the downloaded STYLY Plugin into the Unity Editor.

2. Connect the PC and the VR device.

For Android devices (Mirage Solo / Oculus Go & Quest), you will need to do the following:
• Turn on USB debugging in developer mode.
• Connect to the PC with a USB cable. (*Use a genuine or data-transferable cable for the USB cable.)

3. Open the scene you want to test in the Unity Editor.

4. In the Unity Editor menu, select STYLY -> STYLY Local Preview Tool to open the window, as shown below. 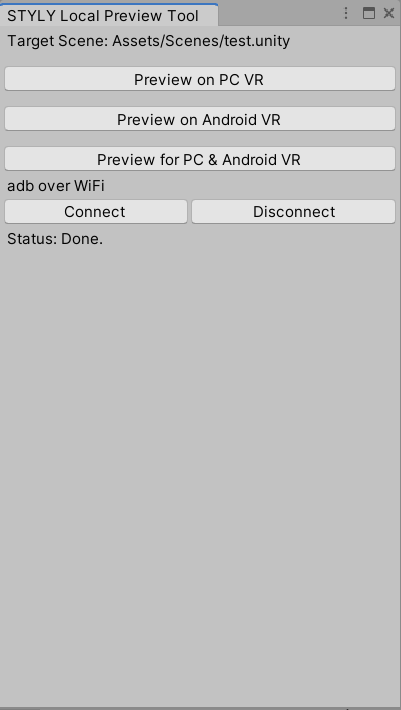 Here’s a Description of Each Button:

STYLY for Steam is launched and the target scene is loaded.

STYLY will be launched in the connected Mirage Solo/Oculus Go & Quest and the target scene will be loaded.

Both the Steam and Android versions of STYLY will be launched and the target scene will be loaded.

Press the Connect button while the Mirage Solo/Oculus Go & Quest is connected to the PC to preview via WiFi even if the USB cable is disconnected; press the Disconnect button to break the connection.

5. Click the button corresponding to the device you want to preview, for example, “Preview on PC VR” for PC.

The following window will appear and the STYLY VR app will launch immediately afterwards, and the target scene will open as a STYLY scene.

*If you don’t have a saved Unity scene, you will be prompted to save the new scene and give it a name.

Immediately After Clicking on the “Preview on PC VR” Button

If you are already running STYLY, the scene will open in that STYLY for you to view.

Once the scene opens, you can check the movement of the scene in the STYLY VR app, in the same way you would if you had uploaded it.

*If the scene does not load completely in STYLY, try pressing the “Preview on PC VR” button again. 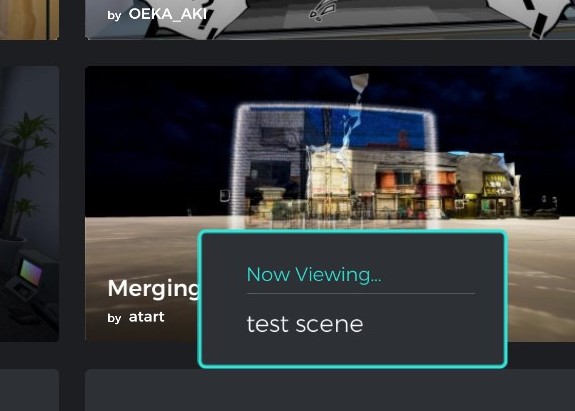 Please note: the scene will open with the name “test scene” and remain in STYLY’s History, but you won’t be able to reopen the scene by selecting it from History.

Once you are done with the local preview, you can upload the scene to STYLY as you usually would for a final check, paying attention to the upload size limit.

If you have forgotten how to upload, please refer to the following article.

This is an introduction on how to use the STYLY Local Preview Tool.