By making full use of drawn curves, smooth lines can be expressed and, when used in conjunction with various illustration creation software such as Blender, hand-drawn pictures can be incorporated to create three-dimensional (3D) assets. In this article, we explain the basics of using curves in 3D graphics, tracing with Inkscape, the open-source drawing application, and more! 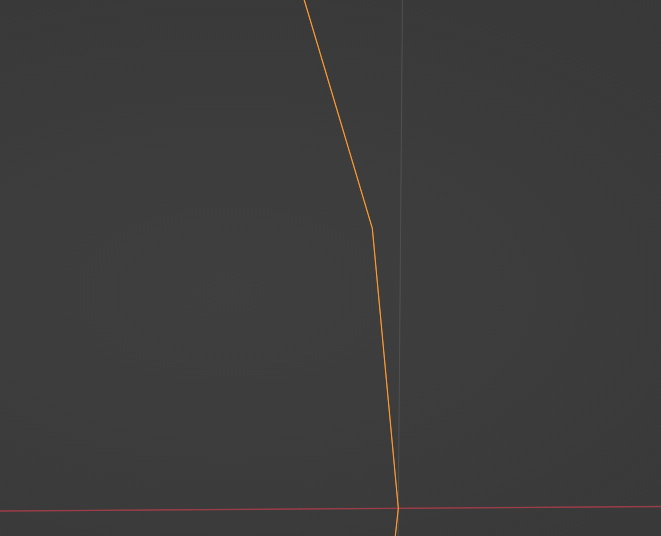 Take a look at the image of a mesh above. Even though it appears to be a perfect circle from a distance, as you look closer, you notice that it is composed of edges.

How about a sphere represented by curves? 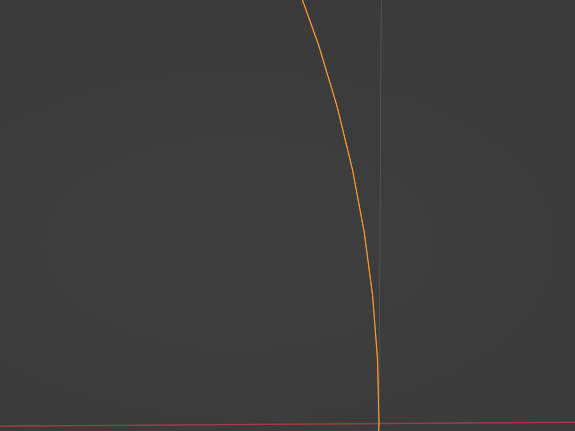 You can see that the corners, as a surface, do not stand out.

If you want to display something smooth with a mesh, it will need to be subdivided into more surfaces. For something that is represented by a curve, however, this subdivision is not necessary.

Some of the drawbacks of using curves include:

Types of Curves Available in Blender

Below, we explore the types of curves available in Blender. We used Bézier curves for this project, but we also explain other formats for reference. 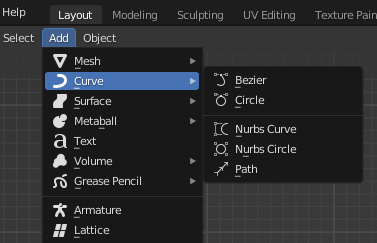 As a concept, the Bézier curve has a long history, existing since the early 1900s, and is supported by many other computer graphics software programs besides Blender. 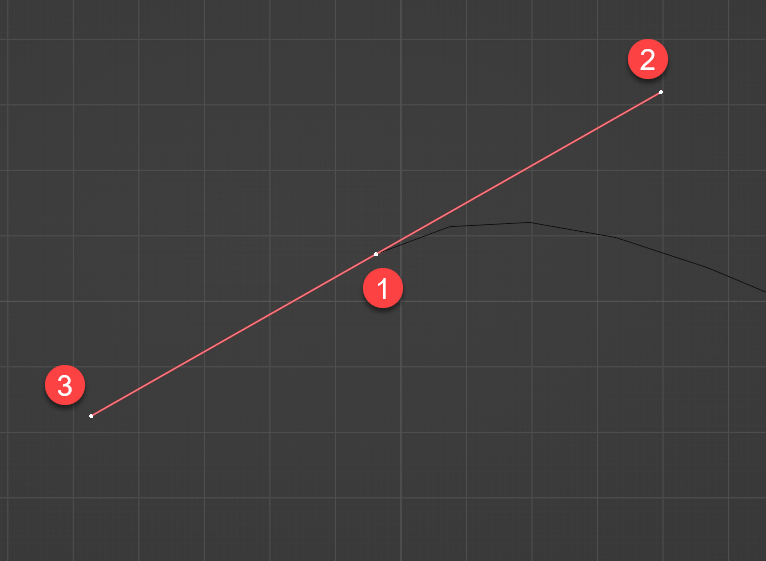 For the Bézier curve control point feature, there are two “handles” (2 and 3 above) for each “control point” (1 above). Thus, the position of the line segment can be specified at the control point and the curve can be adjusted by moving the handles.

NURBS (Non-Uniform Rational B-Spline) are another curve supported by Blender, which have different characteristics than the Bezier curve. 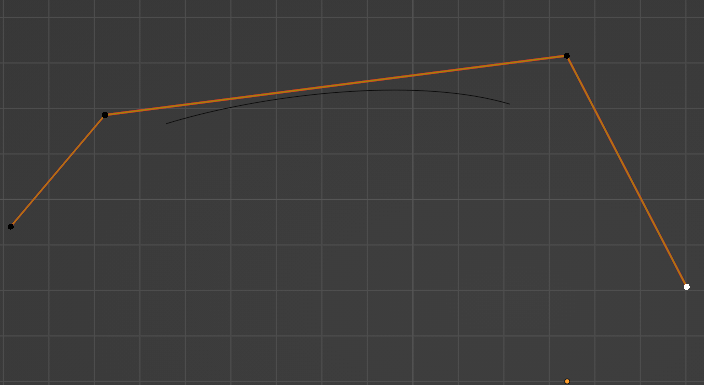 Control Points of the NURBS Curve

Unlike Bézier curves, NURBS are shaped in such a way that the position and weighting information of each control point determines the overall shape of the line segment. In addition to control points, NURBS have “knot” points, which are the actual points that the curve touches (explained in the next section).

Example of Moving the Control Points of a NURBS Curve

“Path” is a special form of NURBS curve with knots at both ends.

Unlike regular NURBS, both ends of Path are fixed, making this type of curve suitable for indicating the movement of an object, as well as for representing shapes. 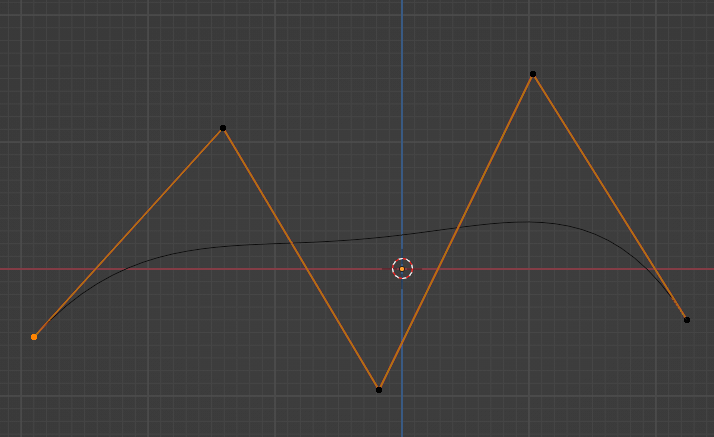 Although Blender allows you to enter text, text is also special curve data. Font enables editing as a string of text, and text can be converted from the Font state to a curve.

A connected curve, such as a Circle, is connected to both a start and end point.

Blender’s curves have a wide variety of functions and can be used to generate complex 3D shapes. However, in this article, we focus on creating 2D illustrations, etc., and converting them into 3D graphics, so we explain just the basic operations of Blender and how to use Bézier curves.

Press the [Tab] key to enter the curve editing mode, where control points and handles are displayed.

Mastering curve editing takes some getting used to, but basically, once you learn how to move a handle to change the curve, you will be able to move it freely. First, select a handle and press the [V] key to bring up the “Set Handle Type” menu. There are several types of handles to choose from; for example, selecting “Vector” will make the handle a straight line. 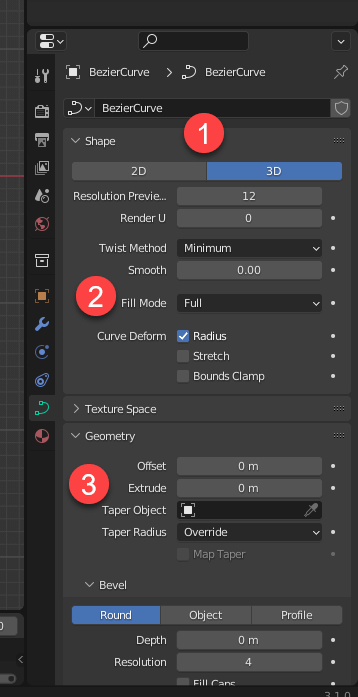 The curve object tool contains many options, but the one we are using is largely the one shown in the numbered steps above and described below:

In addition to Blender, we are using Inkscape to create our example object. Inkscape is an open-source drawing application. For this example, we are converting Inkscape into a form that can be used with Blender, using the tracing function provided by the software. 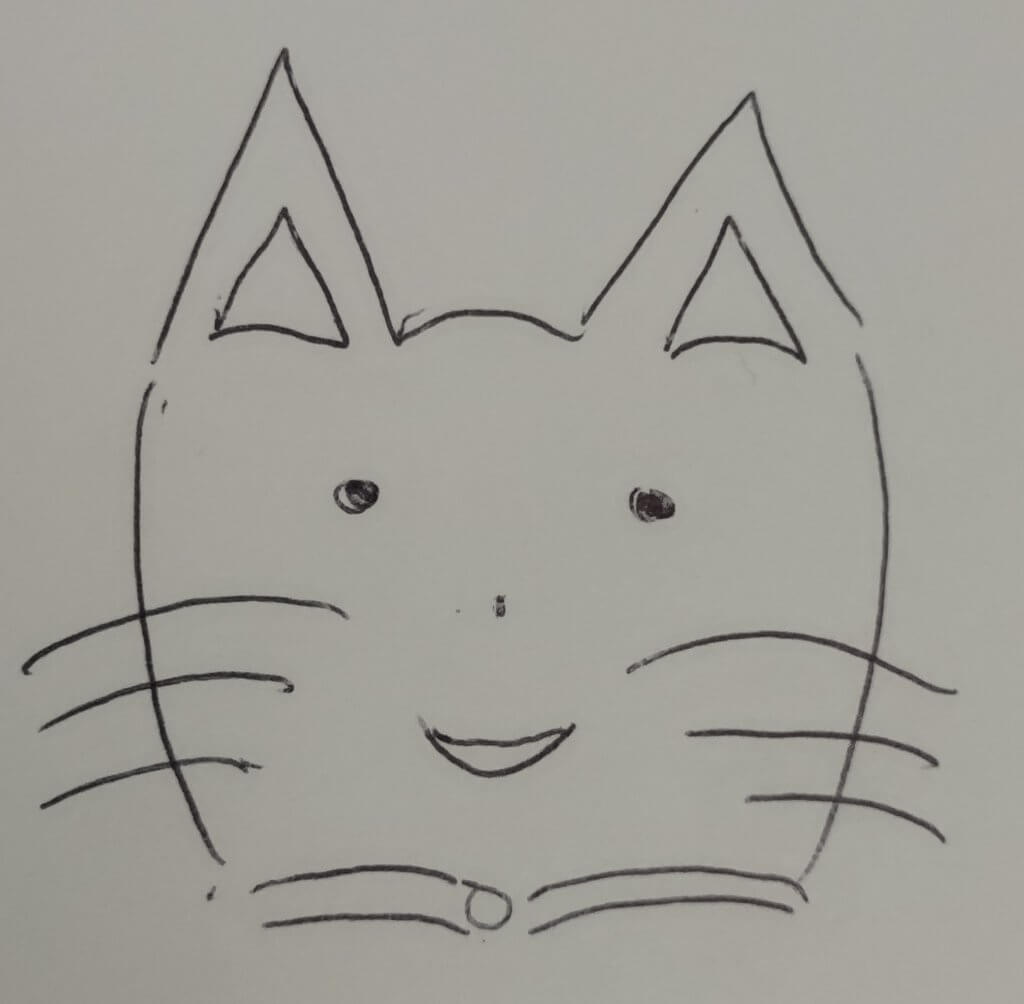 When the welcome screen appears, press “New Document” to open a new document. 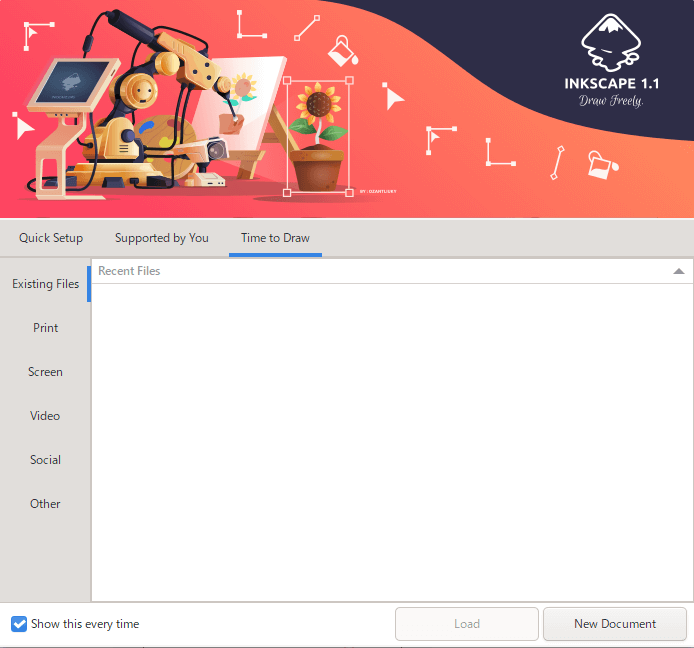 On the welcome screen, select and open the image.

A screen for specifying DPI, etc., will open here, but in most cases, it is okay to use the default DPI. 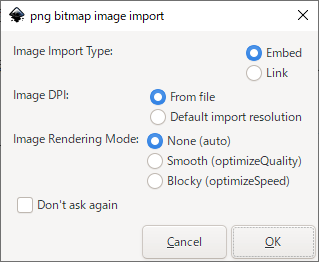 An image will appear.

Click on this image and select Path > Trace Bitmap. 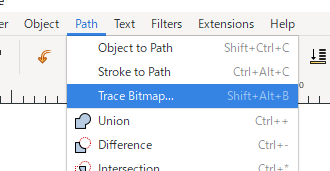 The screen displayed here allows you to select tracing settings and other options. 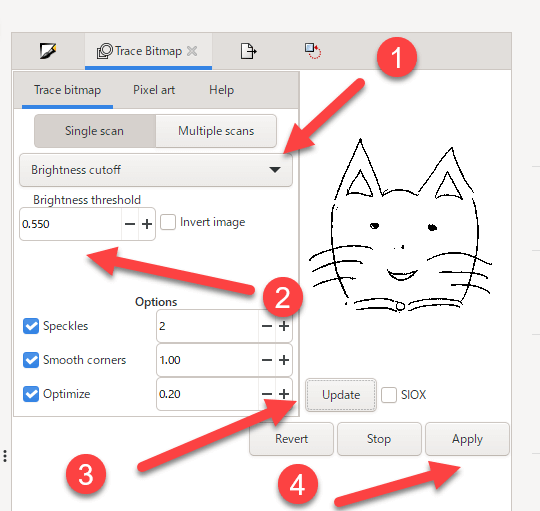 Select the algorithm in the upper drop-down menu (1).

The algorithms vary, depending on style, etc., so choose the setting that produces the best results. “Brightness cutoff,” for example, is a simple method that uses luminance as the base setting. Although there are several settings below “Brightness cutoff,” the “Brightness threshold” (2) is the most important for this algorithm. We recommend using this threshold to find a value that will allow lines to be displayed clearly, while avoiding “noise” other than lines. If necessary, it can also be effective to clean up the image before importing it into Inkscape, using image editing software.

After updating the preview, press “Apply” (4) to add the converted image to the document. 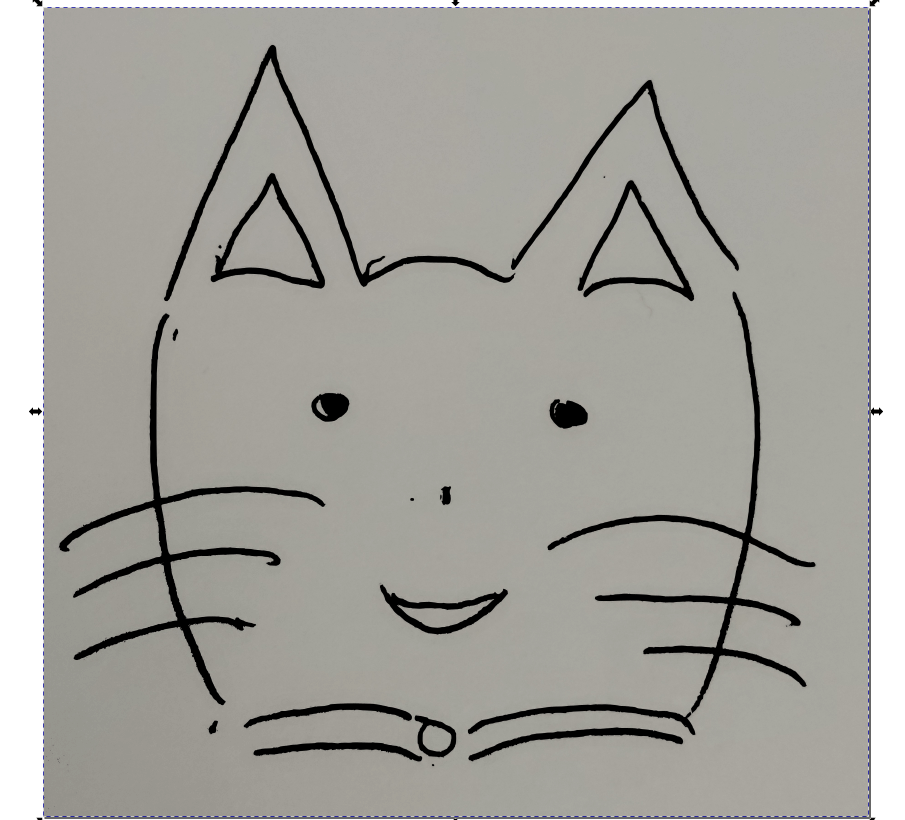 After outputting the curve-transformed image, save the output vector image and delete the first loaded image before saving it.

You can tell if an image is selected by viewing the status bar at the bottom of the screen, which says “Image” when you click on the image.

If it is labeled “Path,” the vectorized image is selected.

Erasing an image removes the original background from the image, leaving only the line drawing. 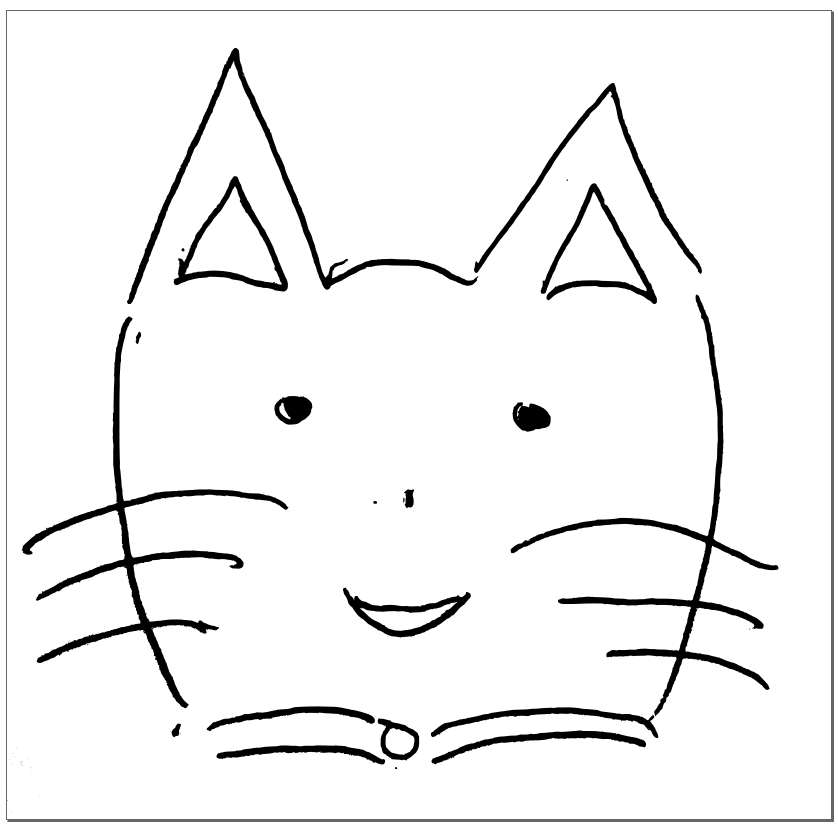 Image With Only Line Drawings

Now, with just the vectorized image remaining, save the file by selecting File > Save As and choose “Plain SVG” as the file type. 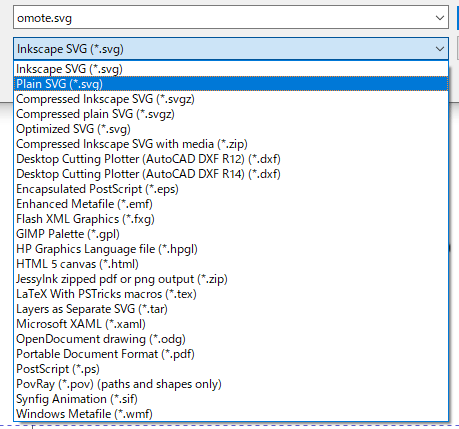 File Types When Saving to Inkscape

You now have a saved scalable vector graphic (SVG) image that can be loaded into Blender, which is the next step!

Note: Please be careful to check copyrights when loading images for tracing.

Working with SVG Files in Blender

Let’s import the SVG file output from tracing in Inkscape into Blender. 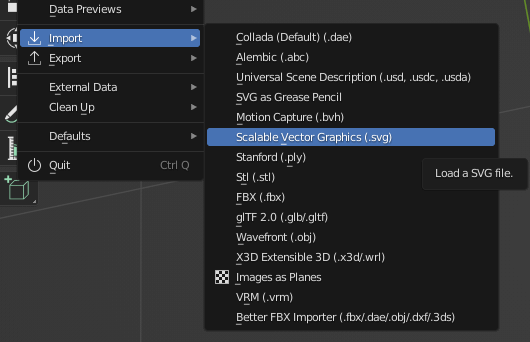 This step will load the SVG file and display the curves. 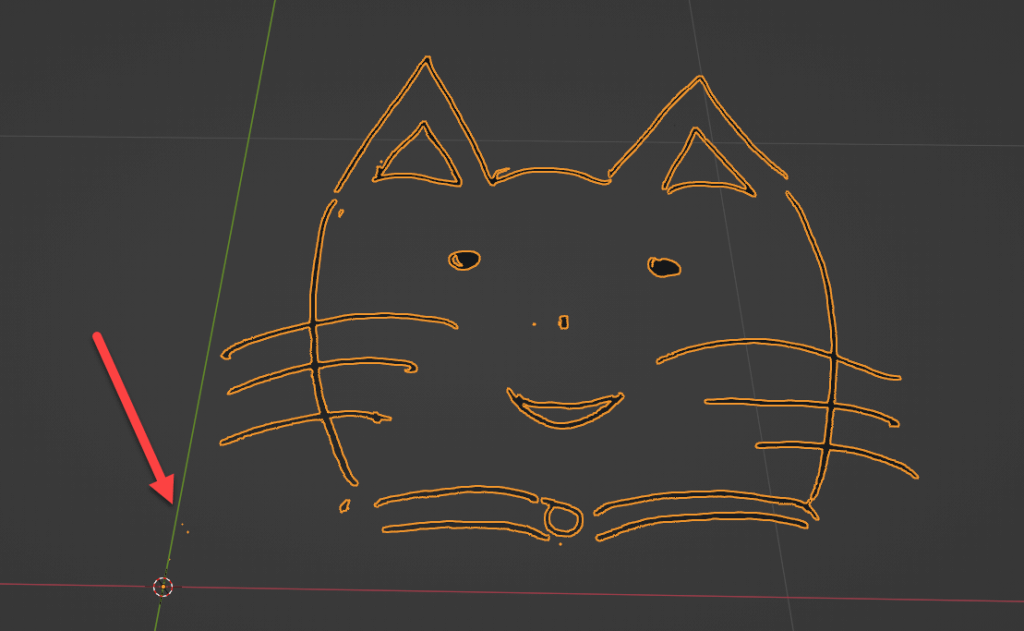 The imported file may show some “garbage,” as indicated by the arrow above. You can clean up this garbage by entering edit mode and erasing.

In addition, some parts of the image may have unwanted irregularities or wrinkles, which can be edited and corrected in edit mode.

You may want to connect two separated parts of your image; we describe the steps of this procedure below.

The second step, “Segments,” is different from the other choice, “Vertices,” in the pop-up menu because Vertices deletes control points, whereas Segments deletes the curve itself.

For a closed curve that constitutes a figure, deleting a vertex will not work well because instead of deleting the curve between the control points, the image will be updated as a figure that does not pass through those control points.

In the video above, after deleting the curve section, we use Vertices to delete the leftover control points.

The imported SVG file will be a flat surface with no thickness, so let’s add thickness to it.

To add thickness, use the object properties. 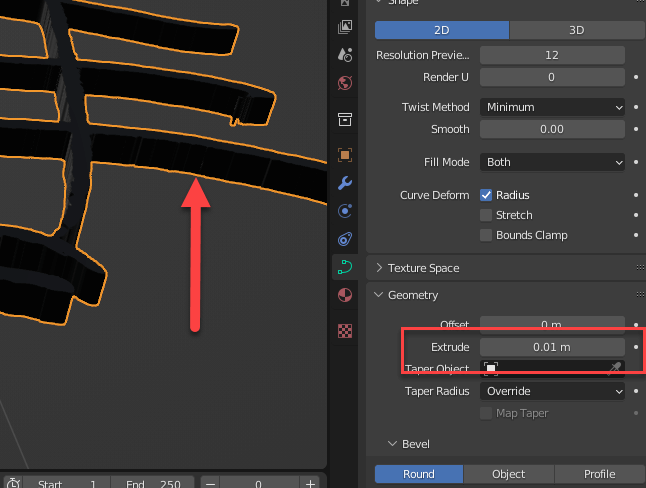 You can add thickness by using the “Extrude” setting in the “Geometry” section.

As indicated by the arrow on the left above, the thickness is reflected in real time, so you can see the actual thickness of the image.

Mesh Transformation of Curves in Blender

It is not suitable to output the converted curves as they are.

Curve data cannot be understood by many environments, including STYLY.

As a result, conversion is necessary. Prior to conversion, a resolution is specified. 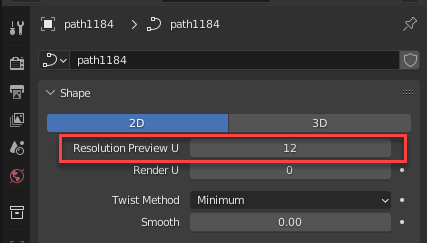 In this example, we will be changing the value of “Resolution Preview U.” “Render U” is used when rendering as an image in Blender, so we will not need it in this case.

Depending on the complexity of the curve to be converted, some curves can be converted with a resolution of 1, while others require a resolution of up to 5. For circles especially, a lower resolution will result in noticeable choppiness. Since the display is updated in real time, find the resolution that seems just right for your image.

Conversion to mesh is performed in object mode by selecting Object > Convert > Mesh.

After this conversion, you can output the mesh to FBX or other formats.

Workflow to Use with STYLY

Next, we will make a model of a name logo. We encourage you, the reader, to prepare a paper sketch of your name or other information and try it out.

First, import your sketch as an image. The best way to import an image is to use a scanner, but if you do not have a scanner, take a picture with your smartphone. Be sure to take the picture in conditions, such as a well-lit spot, that allow for you to see as much contrast in the sketch as possible. Low contrast, for example, can bury what you have drawn in noise when you select the brightness threshold.

For our name logo model, we used the image editing software, Krita, to fill in and otherwise process the captured image. In addition, areas of concern, such as bulges in the drawing, were corrected and cleaned up in this process. You can see that the corrected areas are left white in the following image. This is because only black areas are cut out during tracing and whiter areas are ignored.

Next, open the above image in Inkscape and trace. 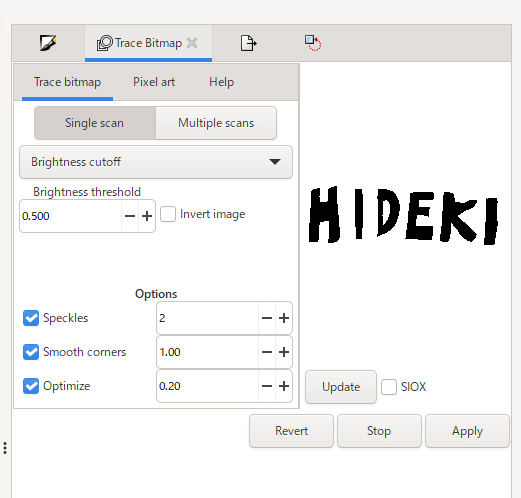 Save the image as an SVG file and import into Blender.

Now, you may notice that there are areas of the imported logo that you would like to correct for noise or shape. For example, the edge of the “H” or the bottom of the “D,” or noise that appears in the lower right corner of the image.

Next, set the thickness for the logo; a thickness of 0.1 meters is specified.

After Setting Thickness and Material

Finally, in addition to thickness, we have set materials, etc., and we added animation separately. Now, we can output this logo as an FBX file and upload it to STYLY.

If you have any questions about STYLY, bug reports, or requests for improvements, please contact the STYLY FORUM.

Using curves and tracings, you can import and use hand-drawn assets as 3D models along with 3D assets. Add accents to your scene with them.