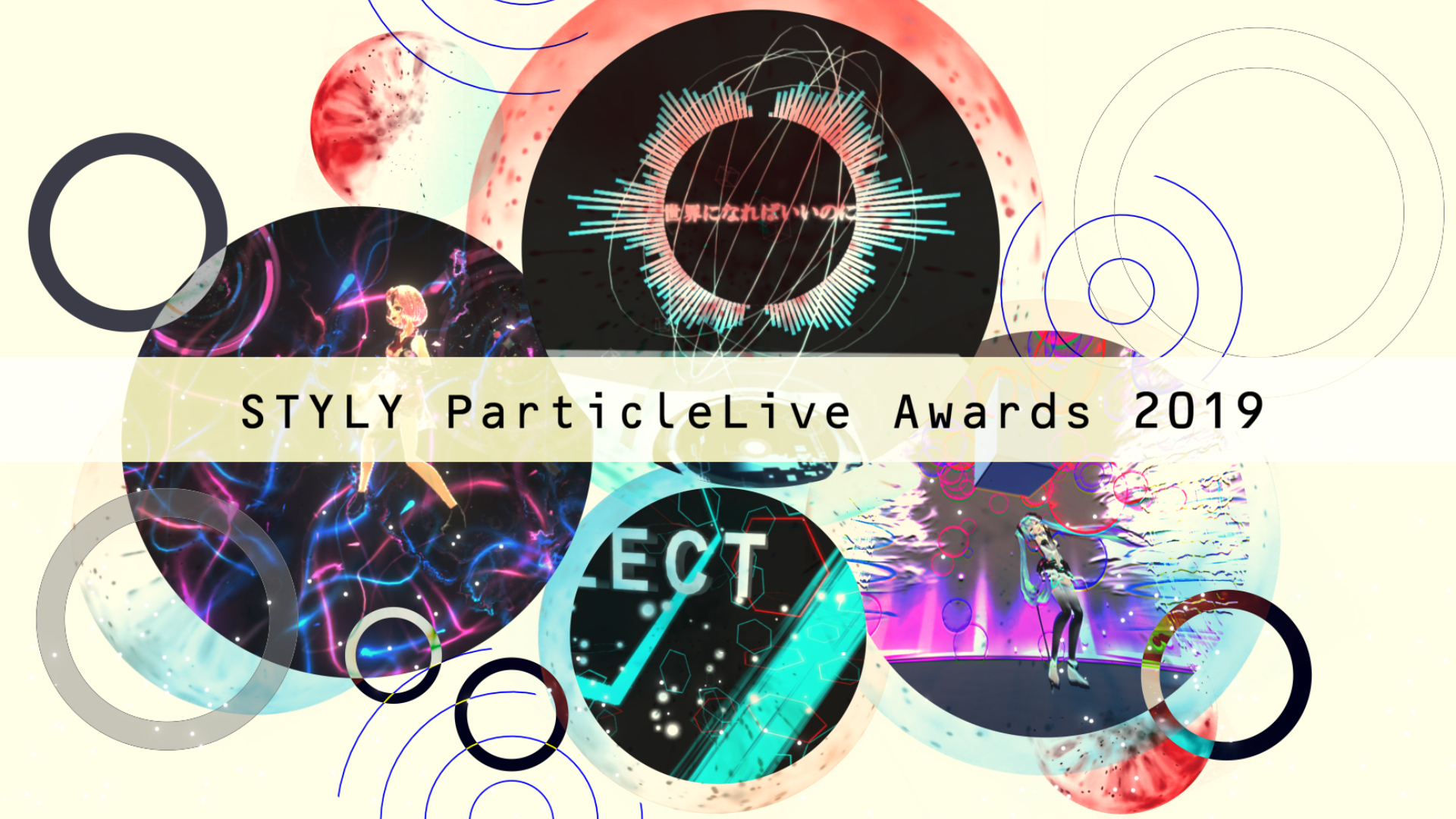 In this article, I will introduce creations applied for the VR content award, ‘STYLY ParticleLive Awards 2019’.
The theme is, ‘Mesmerize the world with particle live’.

Mesmerize the world with particle live performance. STYLY ParticleLive Awards 2019 is a VR content award for works on ‘STYLY’, the platform where anyone can create and share their own VR content. This contest is a spin off from the NEWVIEW AWARDS 2019, which is held by the companies STYLY / PARCO / Loftwork, and applied works can be applied to the NEWVIEW AWARDS 2019 too.

Applications are no longer accepted..

From the 22 works applied for this award, I will introduce the first 11 for this article.

※The left of the works are introduced here.

~Outline~
You can experience a beautiful kaleidoscope-like world in VR.

~Description~
I created this scene with the concept, ‘Anybody, easily, magnificently’. This is a particle live unlike any other, with no vocal, and no lyric effects.

The most important point is that it only uses 4 particle systems, so ‘anybody can create a particle live easily’. By changing each value of the particle systems, you can change the animations and create unlimited expressions.

It looks just like a ‘Kaleidoscope’, so I named the system ‘Kaleido Particle’. This system created by Unity is extremely light, and can be easily applied to other particle lives by changing the object scales and particle amounts.

Another point is that the system is ‘made from 100% basic Unity shaders’, ‘uses less than 10 materials’, and ‘uses only simple animations’, so it can be experienced not only by Web browsers and PCVR, but with mobile VR machines like MirageSolo too.

~Outline~
You can feel as if you entered into a music promotion video.

~Description~
I created a scene that I could call, 《THE ParticleLive》. The concept was to make an experience not possible in real life, such as ‘3-dimentional lyrics’, ‘Particles flowing through you’, and ‘an experience as if you entered into a MV’.

I also used ‘Kaleido Particles’ a lot, and the use of them made this scene into a very different experience. (To learn about the details of Kaleido Particle, https://awrd.com/creatives/detail/8359411 check this article)
I kept in mind to make the scene as light as possible. Because of this, users can experience the scene not from just the web or PCVR, but mobile VR such as MirageSolo.

(NOTE: This work was created with permission from the ‘WAVE’ music rights holder niki-san https://piapro.jp/t/9kXL) )

I used TiltBtush to create an artwork.

This is a particle live using the singer character as the center of focus.

I designed an uplifting dance that uses even the lower half of the body based on my original song, and captured it to my original character(Zombie Girl). I also added an animation so that she waves her hand to the audience, like a real live performance.

The particles I used were provided by Psychic VR Lab (I did want to add more details and depth if I had more time).

I created a VR scene to reproduce the comical and powerful images drawn on a Tairyo-bata.

The tuna suchi and sashimi, seachicken cannings are possible because of the tuna fishermen. I put my gratitude towards them into this 30 second scene.

～What made me create this scene～
I wanted to create a scene using a song from my favourite artist, Shippu-P.
The original song can be found here→https://www.nicovideo.jp/watch/sm24214651

～Details～
From the image colors of the song, I created a spacewith white and yellow.
I also wanted the viewer to focus on the lyrics, so made them stand out with black and white,
and also kept the movements simple.
I used particle effects based on the images I got listening to the song.
I made sure that the effects would not spoil the song.
I used motion capture on myself for the model’s movements.

NOTE: This work was created with permission from Masakuni-san (Shippu-P).

I created a shader so I could create a scene with Glitch-like expressions and lyric expressions, and adjusted it to match the song.
The model I used for this scene is B552/F made by REO[https://reo777.booth.pm/items/1187881].
The images I used are borrowed from Noun Project.

I got permission from Mili to use the song, world.execute(me);.

NOTE: This work is planned to be on display at the virtual market 3, which is going to be held at VRChat.

I tried to express the cute image of my favorite song, unite in the sky, by using VRoid kuromi and unicorn-chan to dance in the scene. I also used many particles for this scene. One particle I want you to look at in particular is a Star shaped one, which also made the title of this scene. In the dark, it shows up as shadows, and when fireworks go up, it matches the color of the firework. I put effort not only to the dancing girls, but the particles surrounding too.

I used a VRoid model called unicorn chan made by Haiero.