In this manual, we will explain in detailed steps how to resolve the incompatibility issues when converting scenes created using Unity2017 from STYLY to STYLY 2.0.

With the latest update, STYLY will officially upgrade its supported Unity version from Unity2017 to Unity2019.

Users and artists can read more details regarding this update in the following article.

Most of the uploaded Prefabs and Scenes, which have been developed using Unity2017, will work correctly in STYLY 2.0. However, a few of these developed Prefabs and Scenes may encounter compatibility issues with the latest update. These issues may include incorrect operations or abnormalities in appearance.

Users and artists can find more detailed information regarding these issues in the “Resources Incompatible with STYLY 2.0” section from the article above.

Artists and users should load and re-upload their developed Prefabs and Scenes using Unity2019 should they encounter these compatibility issues.

Below, users can find detailed steps for fixing these issues.

Regarding the Publish Function and Positioning Assets within STYLY Studio

Users and artists should take note that assets created and uploaded from Unity2019 may not be compatible with the old version of STYLY. Therefore, artists and users should only retry positioning their assets and use the Publish function in STYLY Studio after STYLY 2.0 has been officially released.

Users and artists who do not want to change the URL of their developed STYLY scenes because these URLs are being used on an external site (for example, embedded on a particular page) can directly edit their published scenes.

However, please note while assets uploaded and replaced directly from Unity2019 may immediately take effect in published scenes, these assets may not work correctly in STYLY 2.0.

As specified previously, users and artists should only reposition assets in STYLY Studio once STYLY 2.0 has been officially released to ensure that all of their assets will work correctly in this latest version.

Our team will provide all users and artists with another URL leading to STYLY 2.0’s β Version with which they can test their projects for any compatibility issues using STYLY Studio.

Please note that any scenes whose assets were repositioned using this β version will not work correctly with STYLY (Official Version) before STYLY 2.0’s official release.

The overall flow for transitioning to the new engine is described below.

1. Open your projects which have been used to create your STYLY scenes using Unity2019

※Readjust or replace your created particles and shader if needed.

6. Test your scenes using the official version of STYLY 2.0

In this section, we will describe the detailed steps for installing Unity2019 using Unity Hub, Unity’s official tool. Unity Hub offers users and artists many benefits, including more straightforward methods for managing different Unity versions installed on your device. Thus, our team recommends users and artists to choose this tool.

First, users will need to install Unity Hub before installing Unity. Users can download Unity Hub from the page below: 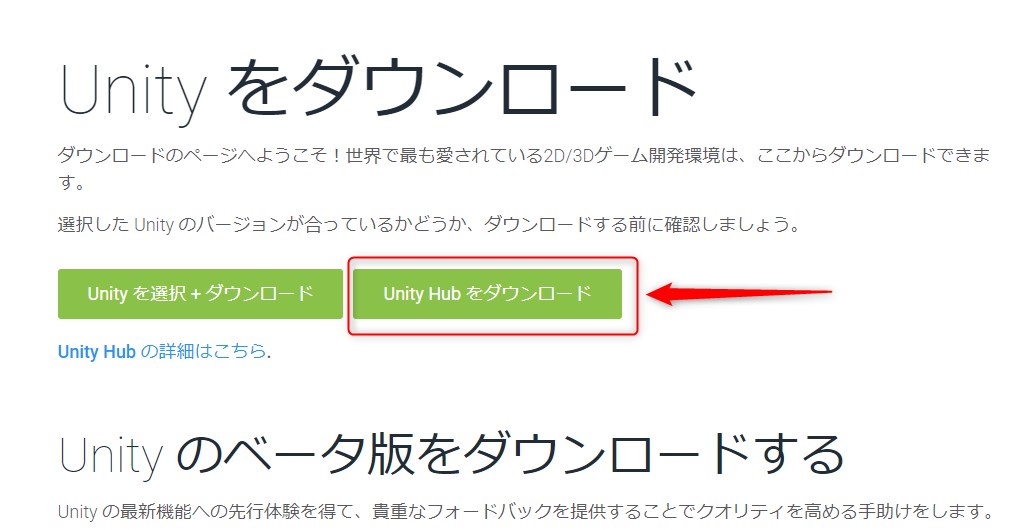 Double click on the downloaded setup file to launch the install program. Accept the user agreement, choose the destination for your installation, and click Install to begin the installation process. 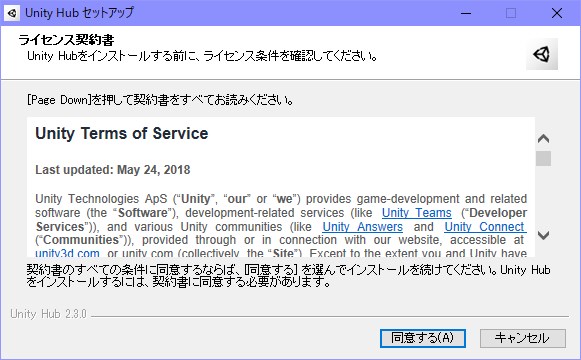 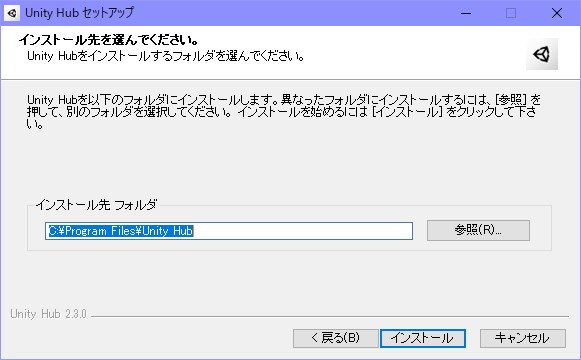 After installing and launching Unity Hub, users can find various sections on the panel’s left side, including the “Project” section, a list of all the users’ projects, and the “Learn” section, a list of tutorials guiding users through Unity’s development environment.

(Please note that these sections may differ depending on the version of the Unity Hub installed on users’ devices.) 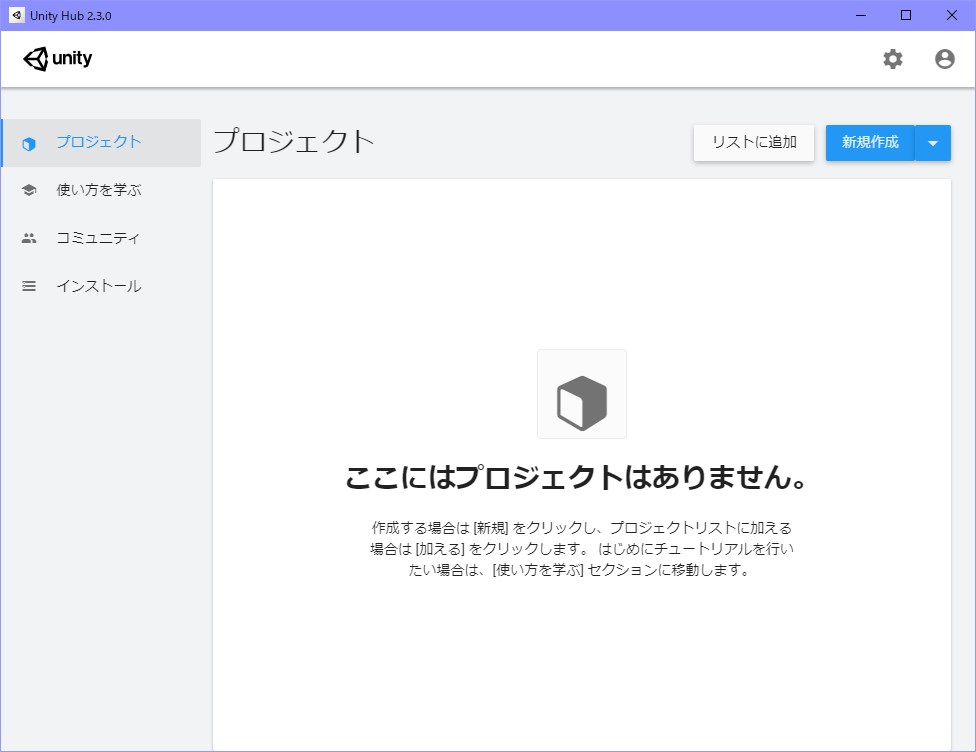 A list of users’ projects as seen from Unity Hub (Unity Hub version 2.3.0)

Next, proceed to install Unity2019.

Open the “Installs” section in Unity Hub. From this panel, users can manage and install the Unity editor of their choice.

To install Unity using Unity Hub, users can click on the Install button next to the file they wish to install. 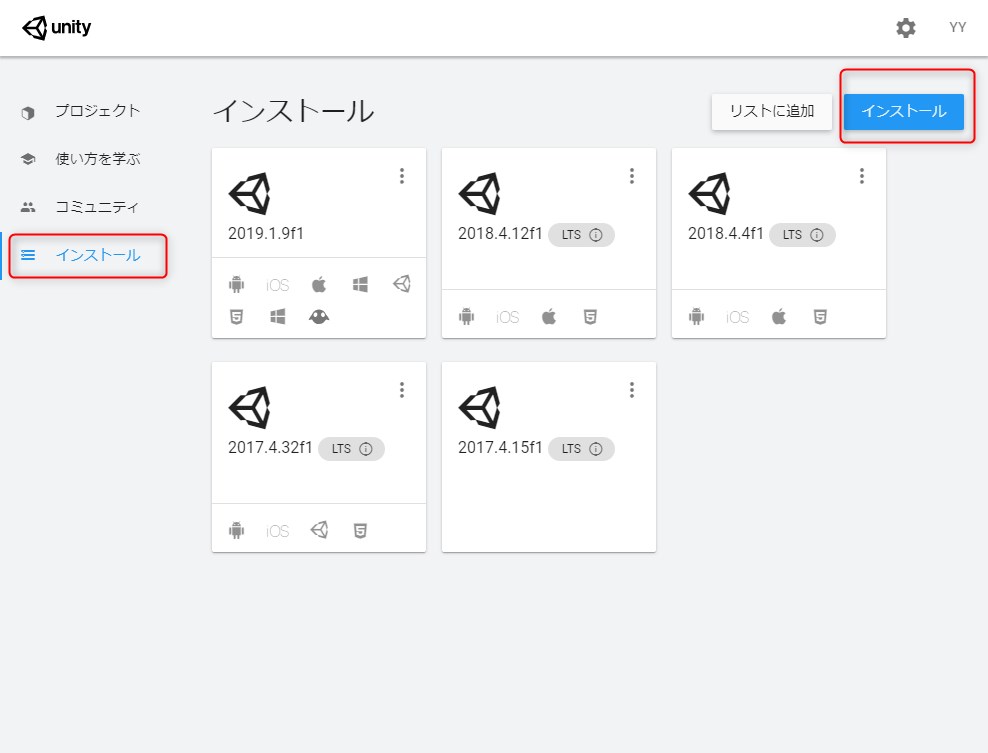 However, at the time of this article, users can only choose to install the Unity2019.3.5f1 version for Unity2019 from Unity Hub. 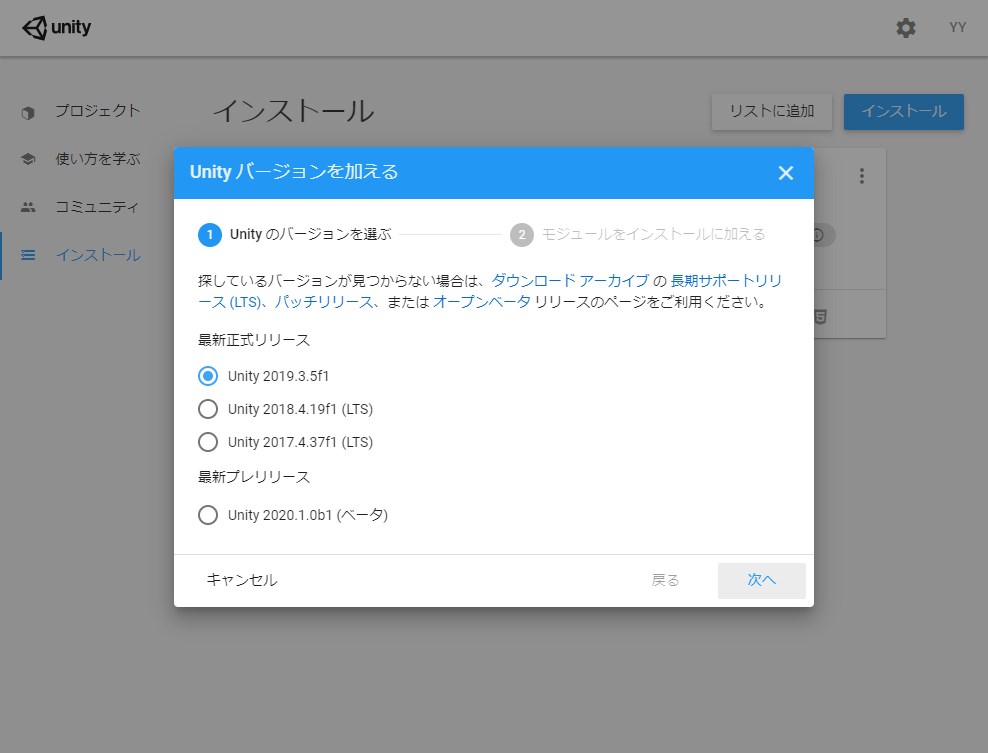 Clicking on the Install button in Unity Hub

Users can browse through and install previous versions from the archive page, which can be accessed from below. 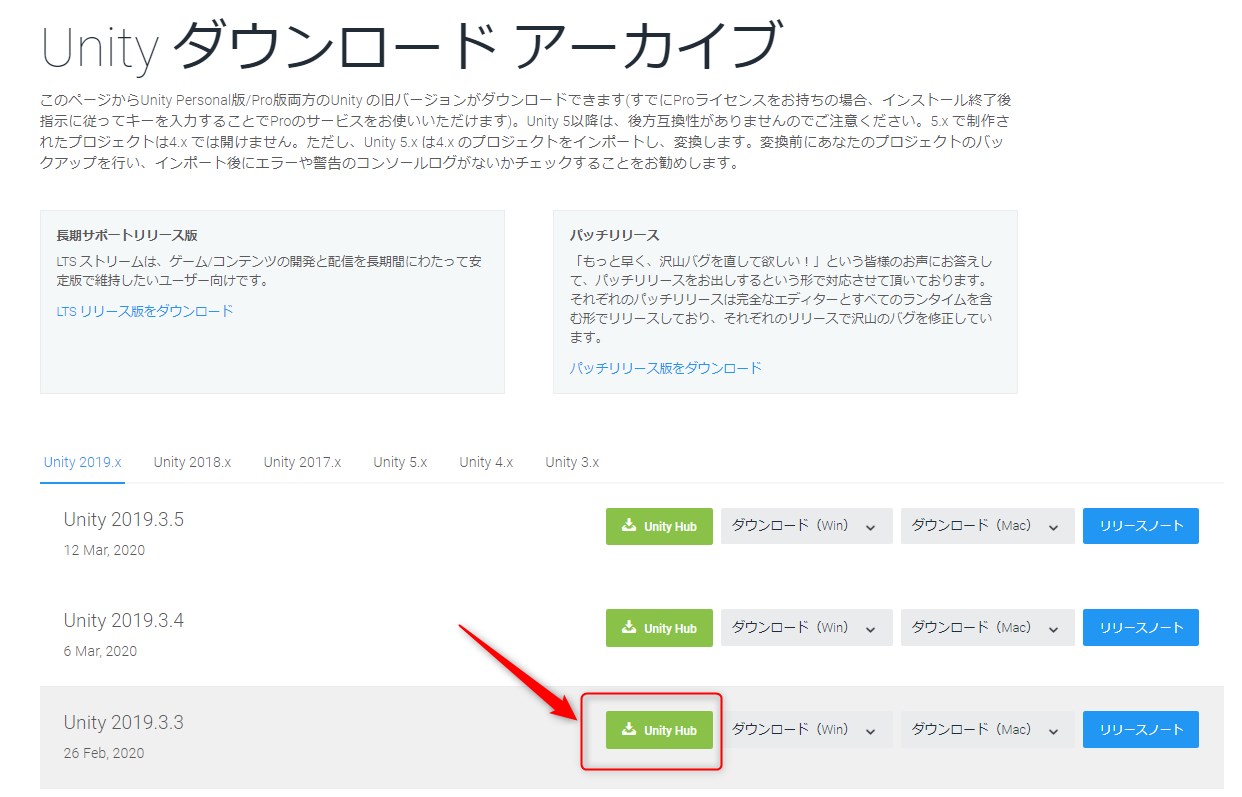 Clicking on the Unity Hub button on the archive page

After clicking on this button, Unity Hub will reopen itself, displaying the dialogue prompting users to begin downloading and installing their chosen version.

Check on the essential modules for uploading your projects to STYLY 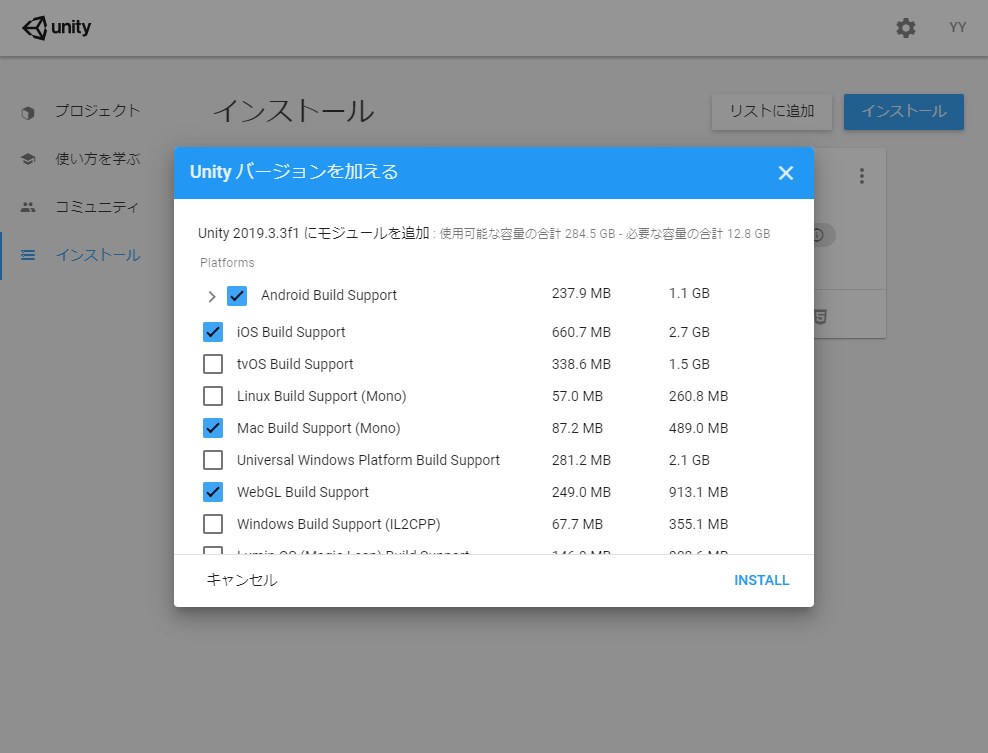 The installation process will begin once users click on the “INSTALL” button.

The selected Unity version will appear in the Installs section along with a progress meter showing the process’s overall progress. 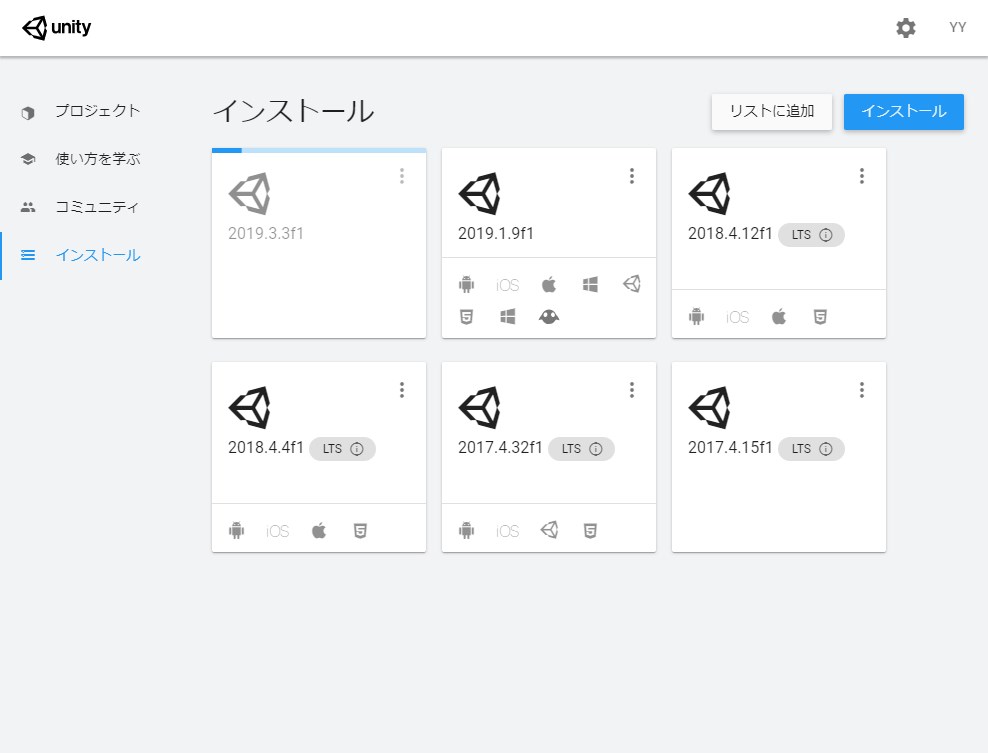 Wait patiently for Unity Hub to finish installing the necessary modules and files. This process may take some time.

Once the installation process has finished, the progress meter will disappear, and the icons of the selected modules will appear. 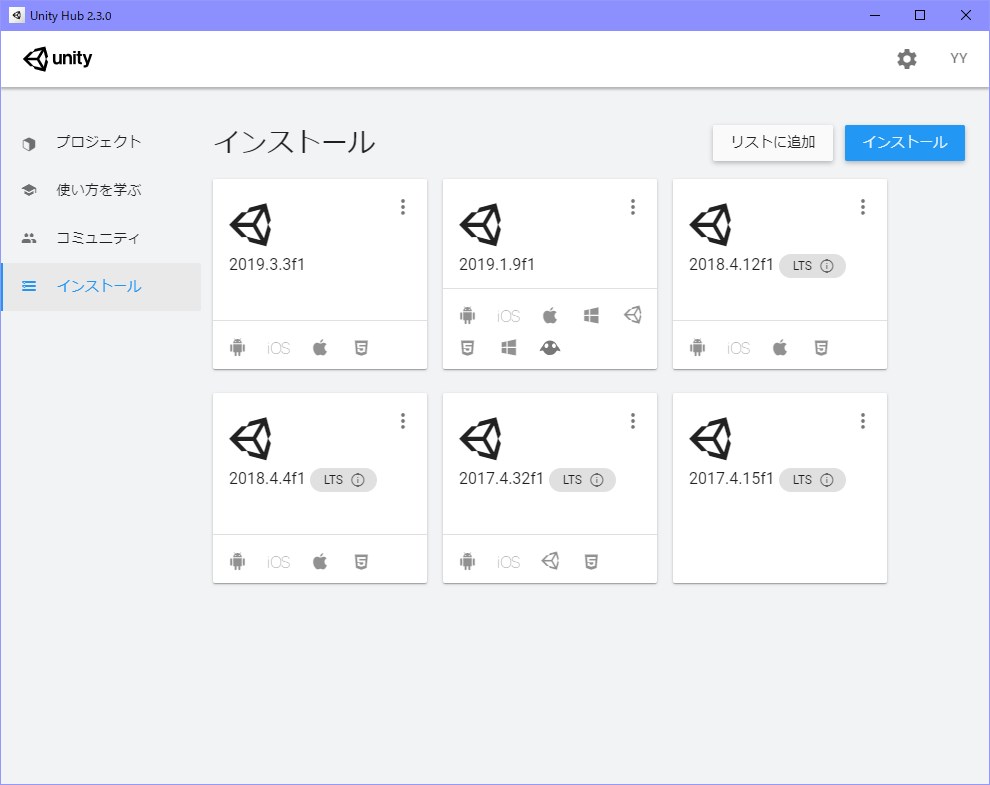 Unity2019 in Unity Hub after the installation process has been completed

Creating Backups for Your Projects

Before opening your projects using the newly installed Unity2019, it’s recommended to create backups for them while retaining their conditions as when created using the previous versions.

This action ensures that no errors could cause harm to your projects. As projects created using Unity’s earlier versions are opened in the latest versions, they will be automatically converted into the newest file format to ensure the best compatibility with the latest editor. This also means that your created data will be altered.

This alteration will also cause the previous editors to be unable to open your projects should it be necessary to edit your projects using earlier editors.

Even in other cases, especially when it’s necessary to come back and make extensive changes to your projects, it’s a good habit to create multiple backups.

Even though we called it backups, all you have to do is to simply make a full copy of the folder containing your projects.

However, since we are making a full copy of a folder, it’s necessary to check beforehand to ensure that your computer has enough free space for further operations.

※Users can skip this step in case they are managing their projects using distributed version control systems such as git, or in case they believe it’s unnecessary to create backups.

Opening Your Projects with Unity2019

Next, proceed to open your projects using Unity2019.

Open the “Projects” section in Unity Hub’s panel. At this stage, your list should still be empty.

To open created projects, click on the “Add” button. 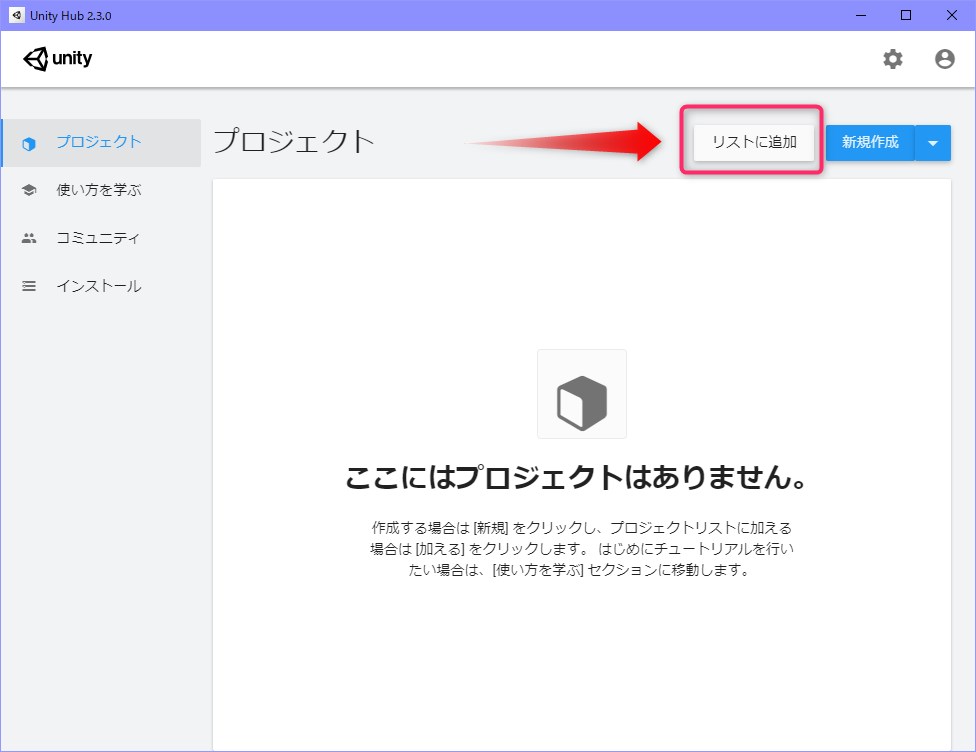 From the newly opened dialogue, choose the folder containing your project to add it to Unity Hub.

You can now choose the “Unity Version” to open your added project. In this case, select Unity2019.3.3f1 as your desired version. 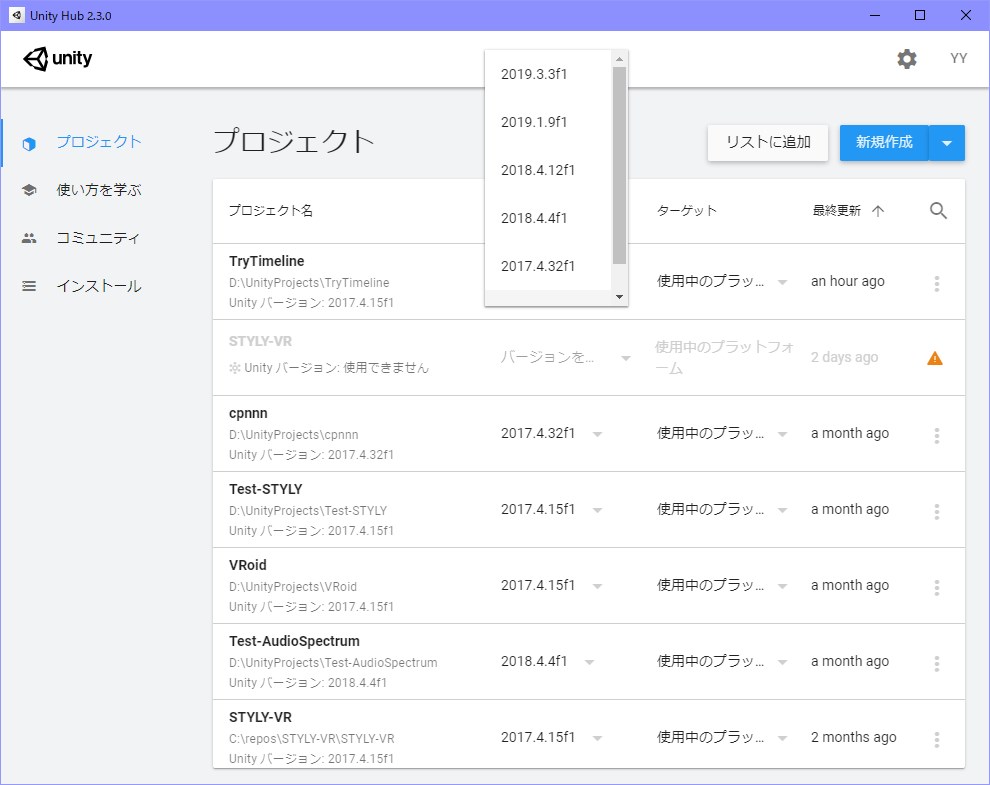 Choose the version of the editor to open your projects

After having changed into your desired version, open your project by clicking on the row containing your project’s information.

You will receive a warning similar to the following. Make sure that you’ve created a backup for your projects before clicking on the “confirm” button to proceed. 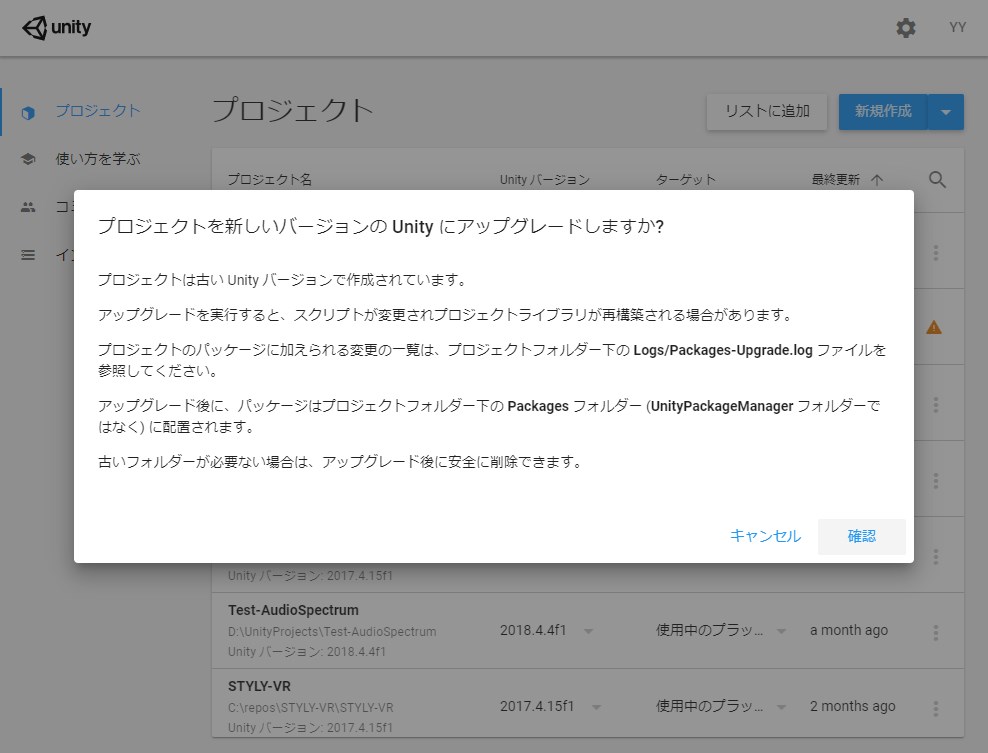 The project should now be opened with your newly selected Unity’s editor.

Most of your project’s data will be converted into the latest format. This process may take some time.

After opening your projects with Unity2019, you may encounter script errors (compiler errors) that prevent you from running your created scene.

For example, if the error was caused by PlayMaker, you can resolve this error by reimporting the PlayMaker.

Upload Your Projects with Unity2019

After launching your project with Unity2019, check for any errors and issues that may occur with the data to be uploaded.

Repair and readjust any data and parameters that may require adjustments using Unity2019.

There’s also a version of the STYLY Plugin for Unity2019 to upload.

You can download and import from the download link in the article referred to in the “Overview” section.

After importing the latest plugin, users can follow the usual steps to upload their projects.

Once the upload process has been completed, typically, you can begin positioning the uploaded assets in STYLY Studio and confirm their operations.

However, as mentioned previously, our team advice all users and artists to refrain from positioning your assets before the upgraded official version of STYLY Studio has been released. At the moment, please stop at uploading your projects to STYLY.

Users and artists who have forgotten the steps for uploading their projects can refer to the article below.

As mentioned in the caution section, users and artists should create a copy of their scenes in STYLY and replace the assets in these scenes with the newly uploaded assets to test their operations in STYLY Studio 2.0 β Version.

Now, you can continue to verify your created scenes for any compatibility issues with STYLY 2.0 β Version’s VR Application and Web Player.

The detailed steps for accessing the β version of STYLY’s services can be found in the first half of the following article.

Please kindly wait for the announcement of STYLY’s official release.

The announcement will be made via STYLY’s e-mail newsletter, Twitter, and similar platforms.

Editing Your Scenes with STYLY Studio 2.0

Only after this step can published scenes be edited.

Delete all of the old STYLY assets, which are now incompatible with the new release, and start positioning and developing your projects using the newly updated Unity2019 compatible Prefab and Scene.

Also, at this point, you can publish your developed projects with the Publish function.

With the latest official release, the latest version of STYLY Application (VR Application) will also be released. Update your current application and use this to test for various operations if needed.

Don’t also forget to check your projects using the STYLY Gallery and Web Player to ensure that no further issues have occurred.

This wraps up our manual for transitioning to Unity2019.

Happy developing! We look forward to seeing more of your beautiful projects!